California Farmers Left to Battle Wildfires On Their Own

Recent incidents have been too much for state fire crews to handle. 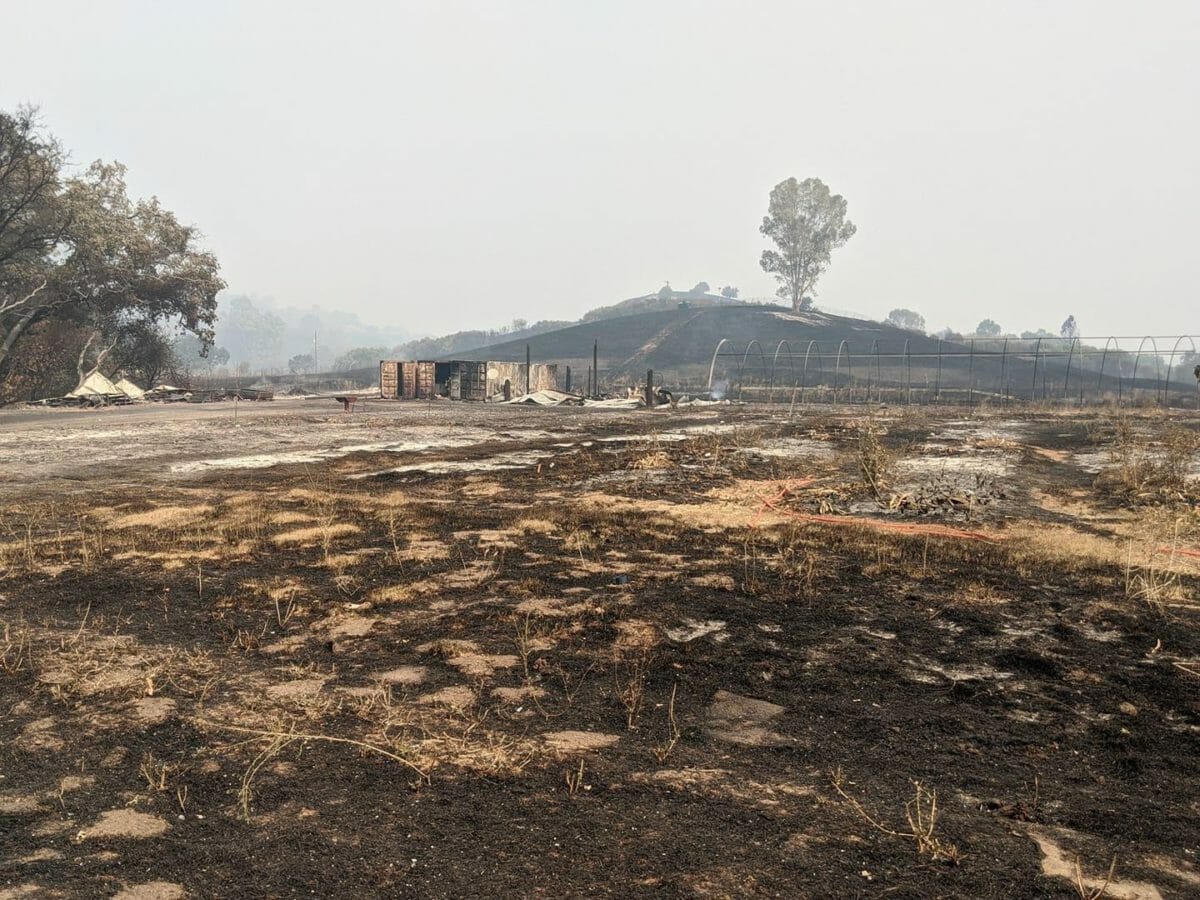 Kendall Richard knows how life can change in an instant. Nearly three weeks ago, she was tending to blooming tall-bearded irises on her eight-acre property. That same piece of land is now scorched and coated in ash.

Last month, Richard, the co-owner of Pleasants Valley Iris Farm in Northern California, watched a faint, faraway glow in the mountains turn into an aggressive blaze that consumed her entire home and flower farm in just over ten minutes.

“All of the embers just got pulled right over the ridge and blanketed the mountain range beside us. It went from nothing to ‘oh my gosh, we need to get out of here now,’” she says. “You literally had minutes to get out.”

Richard has been growing irises with her husband Mark for 14 years on a rural property outside of Vacaville in Northern California. She has become accustomed to dealing with wildfires and the routine process of evacuations. Normally, when flames are looming or there’s a fire nearby, evacuation orders would be sent out without a hitch while personnel monitor the area. This year, crews that have camped out in their fire trucks during past seasons were nowhere to be found. She never received an evacuation notice due to a power outage in the area, forcing her to leave on her own instinct. Richard and her husband, however, can’t help but wonder if things would have been different if fire response was more proactive.

The family is not unique in their situation. A number of farmers in rural areas across Northern California, where wildfires are raging, say they have not received immediate support from state fire crews to tackle flare-ups. The California Department of Forestry and Fire Protection (Cal Fire) and farming organizations involved with fire relief efforts say that since August 15, there have been roughly 14,000 lightning strikes, igniting some of the largest fires in the state. These lightning strikes have been more dispersed than normal, causing staff to prioritize certain fire zones, like higher populated regions.

“It was like the whole northern state caught on fire,” says Brendan Halle, a public information officer with Cal Fire. “You get resource thin because you’re having to go to so many different places.”

The fire department, which has traditionally employed inmates to help with firefighting through its Conservation Camp Program, is also short about 600 bodies compared to last year. This was a result of the California Department of Corrections and Rehabilitation releasing as many as 17,600 inmates in July to protect the prison population and its staff from the pandemic.

Cole Mazariegos-Anastassiou, who owns and operates Brisa de Año Ranch with his partner and three friends in Pescadero, says if they had relied on external support to fight the fire on their farm, the whole place would have burnt down. The four of them caught sight of slow moving flames in the distance on August 18, and immediately decided to spend the day clearing land around their farmland to create firebreaks.

“It became pretty clear that the county and the state weren’t really prepared for this,” he says, adding that the fire crews that were around in neighboring areas had their hands full. “We knew what we needed to do. This is the life that we chose to live… it wasn’t going to change our vision even though it was a bump in the road.” 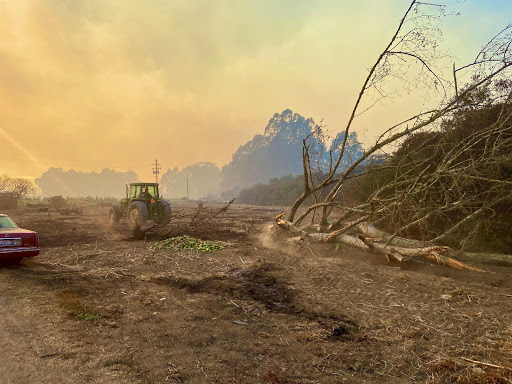 The Brisa de Año Ranch crew used their tractor to yank out large trees from a steep ravine to create a firebreak.

Mazariegos-Anastassiou says that the following day they returned to the farm and found that their cropland was intact, but that the fire had destroyed their irrigation lines, some equipment and their greenhouse. He also learned that crews were still overwhelmed so the farm staff of four, along with about a dozen neighbors, put themselves on full-time fire watch to tackle flare-ups on their properties.

They dealt with flames that reached at least 10 feet tall, says Mazariegos-Anastassiou, with nothing but a few buckets that they would refill with water from a nearby reservoir. At one point, when it seemed like they needed more bodies, he hopped in his car to search for the nearest fire crew, but when he found Cal Fire staff, they told him they couldn’t afford to send help right away. Three days later, Mazariegos-Anastassiou, says there was finally a stable fire crew presence to help them and their neighbors tend to local incidents.

While the damage to his farm has been less than ideal, Mazariegos-Anastassiou says that the situation has shown how resilient his farm and community is. The Richard family, similarly, say that as they started rebuilding their home and farm, the silver lining has been the support they’ve received from loyal customers. They’ve had relatives launch a GoFundMe page on their behalf to help them get back on their feet while they deal with insurance companies. They’ve received messages from customers offering to do anything from rebuilding structures to sending bulbs they’ve purchased from the farm in past years.

“I get choked up just thinking about it,” Richard says. “This whole thing has given us a renewed faith in humanity and the kindness of human beings.”

The big lesson is that you cannot rely on govt. Our govt is too big and too powerful–and ineffectively ponderous. A farmer must do his own fire protection measures throughout the year. If the laws & regulations limit what he wants to do, then he must try to get around them any way he can. They left him helpless once, and they might do it again. Their laws were of no help! Create your own firebreaks, etc. You are on your own–if you haven’t already figured that out!

Just one more great thing about living in the Democratic People’s Republic of Kalifornia.