Painting Eyes On Cows’ Butts Can Scare Away Predators

This crafty little tactic defies the highbrow standards of academia. 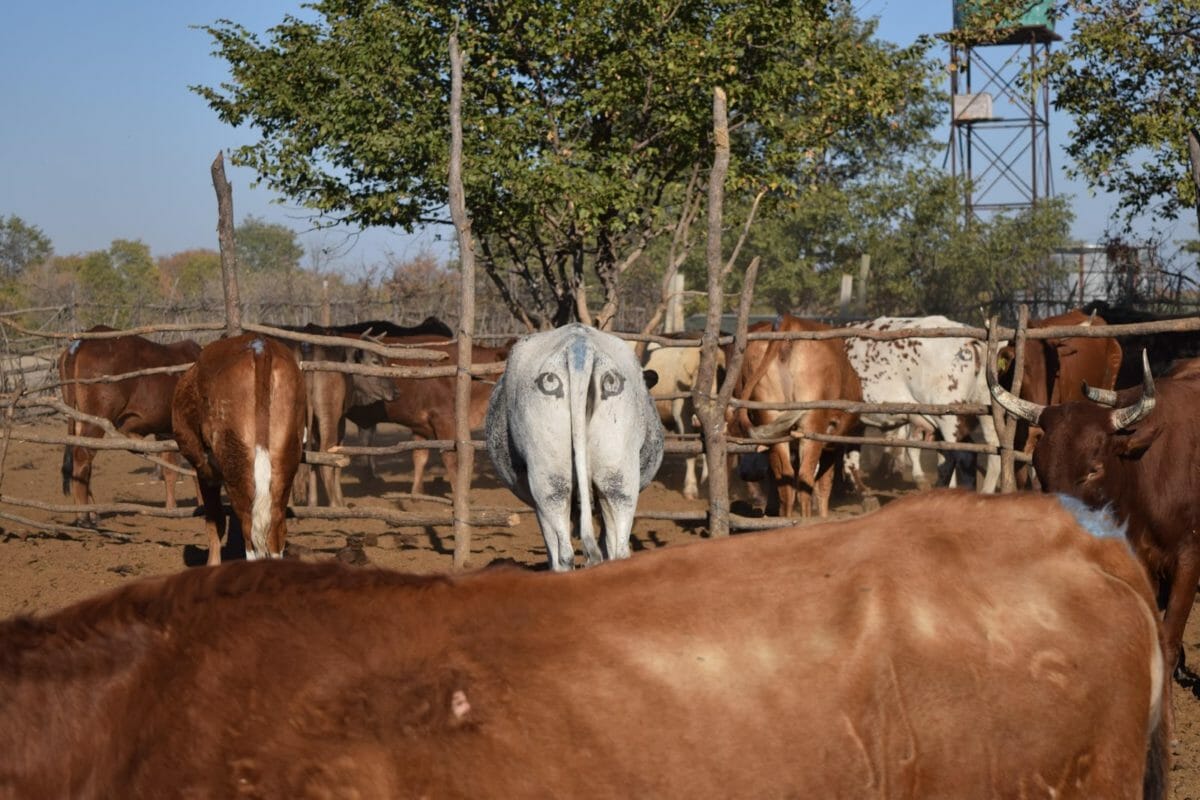 What do you get when you paint a pair of eyes on a cow’s butt? The answer: a cost-effective approach to scaring predators away.

The promise of this simple trick, called the “i-cow” solution, has been highlighted in a recent paper using 2,061 cows on farms in northern Botswana’s Okavango delta region. The study compared how predators reacted to cows that sported eyes on their rear end, ones that had “x’s,” and some with bare backsides. The “i-cow” method involves applying acrylic paint on the bums of cattle with foam stencils that look like a sketch of an eye. The eyes trick certain predators, such as lions and leopards, that try to sneak up on livestock, into thinking the animals can see them.

Researchers tracked herds over a four-year period and found that 15 out of the 835 unpainted cows were killed by predators, four of the 543 cattle with “x’s” died, but every single one of the 683 animals with eye doodles were still alive.

Neil Jordan, a conservation biologist and lecturer at University of New South Wales in Australia, is the mastermind behind the method.

He came up with the idea a few years ago when he was based in a village in rural Botswana doing conservation work. Jordan recalls a situation of two lionesses being killed by farmers after preying on their cattle. Given the fact that the African lion is a vulnerable species whose population has shrunk significantly in recent years, Jordan says he was encouraged to find a non-lethal approach that could promote coexistence. He says he thought about how eyes on cows might work because they have been an effective tool in deterring predators from going after certain butterflies, fish and amphibians.

“There are benefits to learning to live with particular individual predators because you can teach them not to eat your livestock essentially. And that’s better for the ecosystem in general,” he says. “I guess the only thing we could have lost was a bit of face if it didn’t work out, but it seemed to do the trick.”

Initially, he partnered with the Botswana Predator Conservation Trust to test his idea over the span of 10 weeks with a local farmer and like the most recent results, all of the cows with painted eyes survived.

Despite the positive results, Jordan says the method isn’t a sure solution as there were some caveats with how the study was conducted. He says that if farmers painted eyes on the backside of all their cows, predators might eventually figure out that the eyes aren’t real. By having cows without painted eyes, it’s a clear, easy target for predators that doesn’t force them to have to approach the ones with painted butts. Further research should determine its effectiveness, he says, but he suggests that if farmers want to test it out, they can paint the backside of their most valuable cattle.

However, he’s still hoping that the “i-cow” becomes a widely used technique to at least reduce predator attacks and promote the coexistence between large carnivores and livestock. A “coexistence officer” currently in the Botswana region has been promoting a number of non-lethal techniques, including Jordan’s. He’s helped create videos and step-by-step guides that offer an explanation on using the method. And since the study has wrapped up he’s aware of farmers from India, Kenya, Argentina and Peru who have been working to implement the technique.

“I think the farmers are just happy that someone is trying to help with this,” Jordan says. “There aren’t many non-lethal tools out there, so this might fill in the gaps… All you need is a paint pot, paint brush and a little bit of artistic talent.”

As the article makes clear, this idea came from two guys for the University of New South Wales. So I don’t get why you had to have such a snarky, condescending subtitle, taking a nasty swipe at the very people who came up with the experiment.
Science and education are important. Please don’t add to the anti-education,anti-science attitude pervasive today.

If only 1% is lost anyway maybe the the perseption of the problem is greater than rhe reality. I would like to now what the effect on marking calves was. I am farming in namibia and in general we mostly lose calves very little cows. Clave losses can be up to 30%.