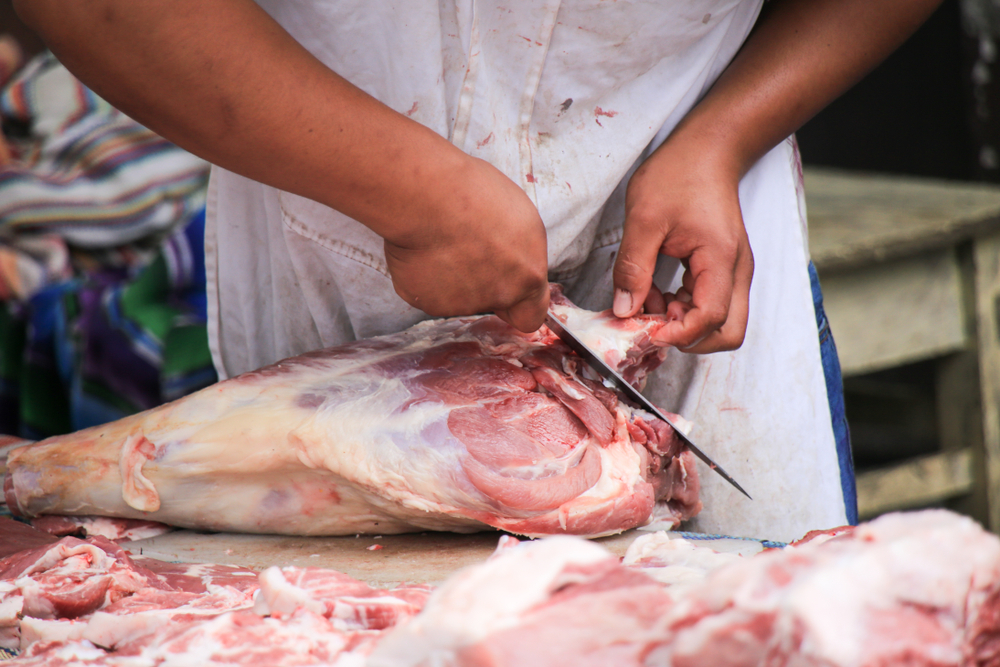 Meat processing has been a disaster zone for COVID-19.
Photography by Hayden Stirling on Shutterstock
Share
Tweet
Pin
Email

In late June, prominent senators (and former presidential candidates) Elizabeth Warren and Cory Booker opened an investigation into the actions of meatpacking plants during the COVID-19 pandemic.

On Friday, they released the results of that investigation, along with responses from four major meat industry corporations. That probe left the two senators wholly unsatisfied, and they called for much more strict (and enforceable) regulations moving forward.

The Food and Environment Reporting Network, a nonprofit investigative news organization, has found that more than 37,000 meatpacking plant workers tested positive for COVID-19 as of July 27, and at least 168 have died. Meatpacking plants have served as such a hotspot for the disease that many smaller towns and cities in which they’re located have suddenly shot from few positive tests per capita to some of the worst percentages in the country.

The Warren/Booker investigation runs down some of the policy decisions that have led to this point. In April, following dozens of plant closures, the Trump administration published an executive order to push those plants to reopen or remain open. Meat exports to China, a major moneymaker for the American meat industry, surged despite those companies warning the country could experience meat shortages.

Essentially, the Warren/Booker report states that the meat corporations used the COVID-19 pandemic as a cover to continue operations in an unsafe manner, and to push the government into allowing this. The corporations say they have complied with CDC guidelines, though reporting from inside the plants indicate that, in at least some plants, adherence to these guidelines has been either lax or late.

Emails uncovered by ProPublica found that a confused official response, along with differing guidelines among local, state, and federal agencies, combined with the plants’ desire to keep operations moving despite the pandemic.

“If these companies believe they’re doing everything required of them to protect workers, yet workers continue getting sick and dying, then it’s clear that non-enforceable CDC guidance is not enough,” writes Senator Warren in the investigation’s press release. Warren and Booker are calling for what’s called an Emergency Temporary Standard, or ETS, administered by the Occupational Safety and Health Administration (OSHA).

This is something many critics of the government’s COVID-19 response have called for. As it stands today, the meatpacking plants have CDC rules, but these are voluntary. An ETS would allow OSHA to create and strictly enforce rules relating to worker safety during the pandemic, a major step up from the voluntary CDC guidelines. Even in the first omnibus aid bill, on May 15, an ETS was included by Democrats in the House, but then killed in the Senate by Republicans.

Booker has a long history of fighting for reform in the American agriculture industry; his Farm System Reform Act proposal was a major element of his presidential campaign last year. Elizabeth Warren has been a significant opponent of corporate consolidation in the agriculture industry.

The response of the companies was not, say Warren and Booker, transparent. None of the four corporations from which information was requested—JBS, Smithfield Foods, Cargill, and Tyson Foods—gave precise numbers on the number of positive test results or deaths at their plants. Neither Cargill nor JBS even mentioned physical distancing among workers at plants; Smithfield claimed it was not really possible, and Tyson said it is working to provide barriers and shields “where social distancing is not possible.” This, of course, demands the question of why these plants are still operational if even the most basic of guidelines cannot be followed.

The press release for the investigation also notes that the vast majority of COVID-19 cases and deaths affected racial or ethnic minorities; more than half of American meatpacking plant workers are either Black or Latinx. But when filtering by the workers who are employed in the higher-risk positions, that number rises sharply. One study from July 10 found that 87 percent of COVID-19 cases in these plants were racial or ethnic minorities.

This release comes as Senate Republicans ready their next response bill, which is estimated to come in at around or under $1 trillion. It is not clear—and, to be frank, not very likely—that this OSHA ETS proposal will be a part of it.

Related
Farmers and Ranchers Squeezed By Rising Fuel CostsEmily Baron Cadloff
Animals
Mormon Crickets Swarm Oregon FarmsShea Swenson
Animals, Food & Drink
These Chicken Nuggets Are Anything But BonelessEmily Baron Cadloff
Animals, Food & Drink
Can Finding New Culinary Markets for Green Crabs Help Curb the Invasive...Tim Briggs
wpDiscuz
We use cookies on our website to give you the most relevant experience by remembering your preferences and repeat visits. By clicking “Accept”, you consent to the use of ALL the cookies.
Cookie settings ACCEPT
Privacy & Cookies Policy