It’s a huge victory for aquaculture. For the oceans, maybe less so. 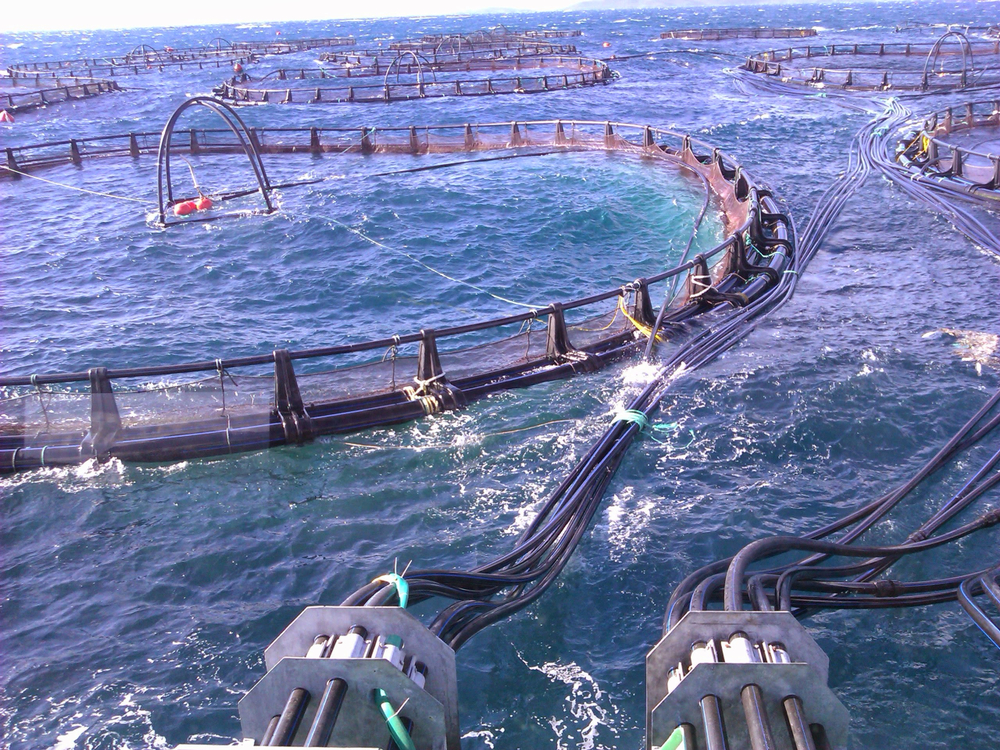 That order, as reported by the Food and Environment Reporting Network (FERN), is designed at its core to expand the scope and facilities for aquaculture. What that likely means is a reduction in regulations, and the creation of large offshore fish farms.

The order includes several components. Perhaps most importantly is to allow finfish aquaculture “in marine and coastal waters out to the limit of the territorial sea and in ocean waters beyond the territorial sea within the exclusive economic zone of the United States.” Most aquaculture—seafood farming—in the United States’ wild waters is for bivalves like oysters, clams, and mussels. Bivalves are filter feeders; they clean the water, and many bivalve aquaculture projects are designed to restore native bivalves to polluted waters, like the Long Island Sound, near and around New York City.

Finfish aquaculture, which involves fish like salmon and tilapia, is mostly done in artificial facilities in the United States. Tilapia, for example, is usually grown in recirculating tanks, often far inland, where waste can be collected and environmental impacts can be minimized. Domestic farmed tilapia only accounts for about five percent of American tilapia consumption, but it’s a good option for the environment.

The executive order opens the door for offshore operations, which are typically huge floating cages where fish can be raised and farmed. Doing these in federal waters, between three and 200 miles offshore, was not permitted until this executive order.

The order would place regulation of these farms under the aegis of the National Oceanic and Atmospheric Administration. It also asks seafood industry companies for their input on, essentially, regulations that they think should be cut.

The seafood industry in the United States is a bit of a strange one. With two oceans, huge rivers, and the Gulf of Mexico, the US is a powerhouse in terms of seafood. But the vast majority of that seafood is exported, and seafood processing is oddly limited in that even some of the domestic seafood that’s actually consumed in the US goes overseas for processing before being shipped back for sale.

Environmental groups and those concerned with sustainable seafood are not in favor of pretty much anything in this executive order. “The move threatens our ocean ecosystem, local fishing communities and coastal economies,” writes Friends of the Earth in a press release. Farmed seafood of this sort is associated with all kinds of nasty effects: parasites and diseases passed from farmed pens to wild fish, pesticides and antibiotics leaking into the ocean, and escaped fish outcompeting wild fish for food or devouring vulnerable animals.

FERN notes that the timeline for this executive order is extremely brief: only 90 days for a permit to be drafted, and two years for an environmental review. Both of those figures are short for this type of effort, and with the federal government already hamstrung by COVID-19, environmental groups are concerned that due diligence will not be a priority.

While offshore fish farms would be a boon to major seafood corporations, smaller fishermen would be harmed by it in several ways. Those environmental effects could deplete the health of wild waters, which fishermen depend on. They could also flood the market with cheaper farmed fish, harming the demand for more sustainably caught seafood.

And fishermen are deeply struggling right now, anyway. Restaurants and hotels, which make up about two-thirds of the market for the American seafood industry, are pretty much all closed. This order will not help them; in fact, it seems more likely to hurt them.

Bad for the environment. Bad for the commercial fisherman. Probably will prove to be bad for the consumer, when it’s all said and done.

The article creates a false impression that shellfish improve water quality this is simple not the case. When grown in high concentrations shellfish excrete significant amount of nitrate and ammonium that negativity impact water and sediment quality. This fact has been demonstrates definitively in scientific research on the subject. When shellfish waste builds up in sediments beneath oyster culture floats there is and increase release of soluble reactive nitrogen the can drive primary production of algae. Additional the concentration of waste also results in a build up of hydrogen sulfide in sediments. It is imperative that best management practices and… Read more »

This article is very inflammatory and the writer is ill-informed. In both Panama and off Kona, where open ocean aquaculture operations exist, marine live thrives–and fishermen are reaping the benefits of marine life that clusters around the pens. Please inform yourselves before you fly off the handle. Aquaculture is here to stay. Why not let this country benefit from growing fish when commercial harvests are declining?

factory farming the ocean? we didnt learn at all from covid. anyone notice everything the U.S. does, is always obviously bad for humanity?

If seafood is to survive, fish farming needs to be part of the equation. Wild fisheries are overstressed in many circumstances, and in cases where they are not, it’s often due to significant restrictions on the catch. Obviously there can be environmental impacts and these should be addressed, but all food production has some impact. In the US we import about 80% of the seafood we consume, and about half of that is farmed.

Everyone fears change and they like to point to failed efforts or poorly run enterprises to undermine progress. The key is in the actual process and how closely it matches the term “Sustainable Aquaculture”. The true key is balanced synergistic mariculture deployed for circular economic enhancement for offshore lease value maximization in concert with open ocean renewable energy generation to satisfy The Public Trust Doctrine. Utilizing symbiotic species, algae, filter feeders and finfish an excellent opportunity exists for maximizing the value of the offshore deployment, maximizing the capital investment return and the ability to share IoT and essential support services.… Read more »

it’s simple. Now….there are none. Humans are the enemy of mother earth.

Talk about fake news ! Everyone who knows about fishing can tell you that farmed fish is bad in EVERY way. 1.. tastes like shit 2.. the feed they feed them kills the environment around those sites 3.. they carry viruses and tumors ( from being reared in a confined area) 4.. has no benefits for commercial fishermen and sport anglers. And as far as building them 200 miles off shore , they will be destroyed by the first storm. Then you’ll have crap everywhere that no one will take blame for. And you’ll have an invasive species swimming out… Read more »