The Allure of Hops Turns Sour for Some Canadian Growers

Canadian farmers are dropping the crop, as American hops have dominated their brews. 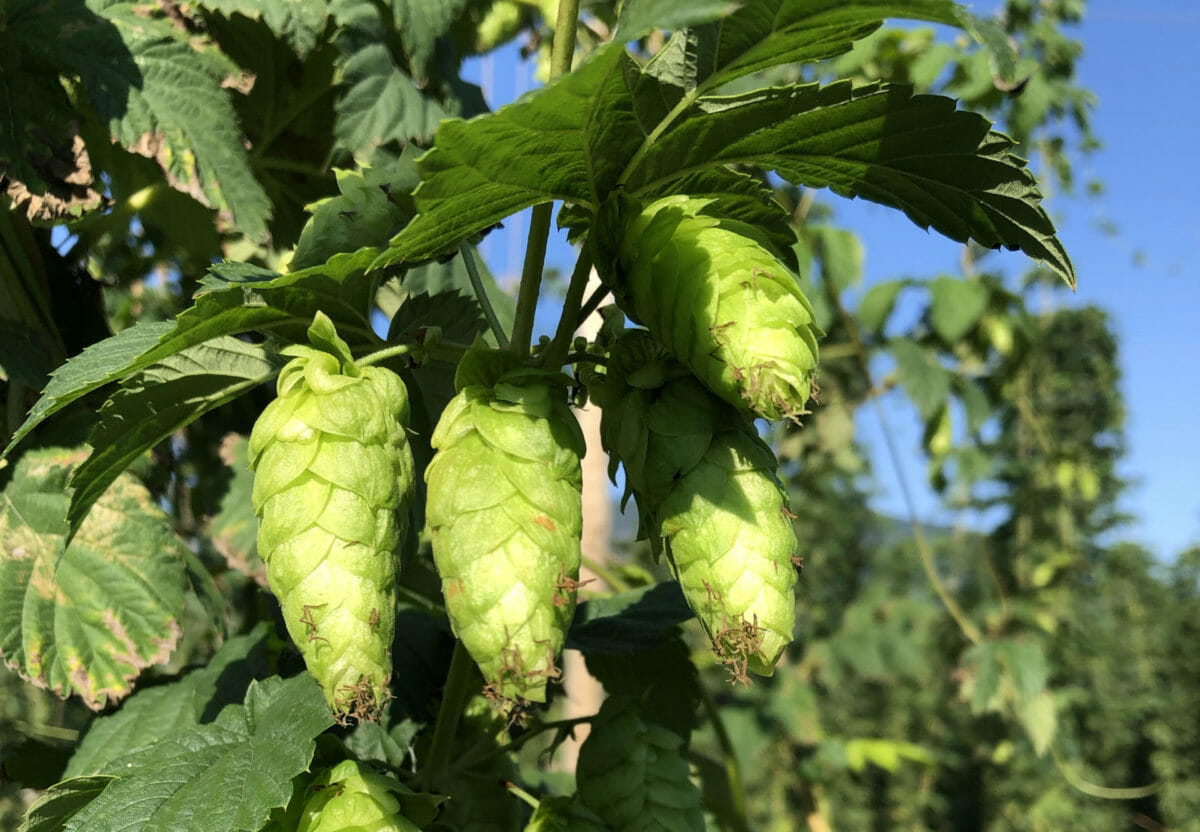 Dozens of farmers in the Canadian province of Ontario dove into growing hops in recent years, encouraged by an explosion of local craft breweries they assumed would be thirsty for local ingredients. But by the time some growers were ready to sell their hops, brewers weren’t that interested in what they had to sell.

Many growers in Ontario are now sitting on at least two years worth of inventory, and have to sell older hops at discount rates. Things have gotten so bad for some farmers in two of Canada’s biggest hop growing provinces—Ontario and British Columbia—that they’ve decided to get out of growing the product all together. “At the beginning there was a big allure,” says Brandon Bickle, an Ontario grower who has decided to shut down his hop farm, Valley Hops, after seven seasons.

There are a number of reasons growers blame for this problem, but principle among them is brewers’ tendencies to chase the latest beer trends. In recent years, hazy, juicy New England Style India Pale Ales have become really popular, and Ontario farmers simply can’t grow some of the proprietary hops that are common in these beers.

Hop breeders in the Pacific Northwest have developed proprietary hops, such as Mosaic and Citra, over years, and the popularity of these varieties has caused a huge challenge for Canadian hop farmers. “It makes it impossible for us because we can’t get access to those plants to grow,” says Bickle.

It often takes around three years to get a harvest suitable for commercial sale. Humulus lupulus, the hop plant, is perennial and takes a number of seasons for its root system to establish itself. This can be challenging for new hop farmers. In recent years, many Canadian hop farmers planted the same three or four varieties that were very in demand at the time. But as these hop farms started to get yields that were commercially viable, beer styles have changed, and those varieties aren’t as in demand as they were, leading to an oversupply of those types.

Many Ontario farmers grow varieties such as Chinook and Cascade. They’ve found that many brewers also buy these varieties for cheap prices from American suppliers they have long term contracts with. Some Canadian growers have experimented with their own feral hops, and some associations that represent Canadian growers are supporting efforts to breed new proprietary varieties for their members. But in the meantime, American hops are dominating the Canadian beer market.

That’s a hard reality for Ontario growers who have had to invest a lot into getting their hop operations started. Bickle says making a profit has been impossible for him due to how capital intensive hop farming has been, combined with a price war that’s erupted among growers in Ontario. Some are selling certain varieties of hops for as low as $5 per pound. Bickle says he can make money when hops sell for $17 to $20 per pound.

Ontario growers Catherine Crawford and Edgar Ramirez say they have contacted countless brewers across the province to try to sell hops from their farm, Pleasant Valley Hops. But they’re now sitting on a couple years worth of inventory. They say this scenario is fairly common among Ontario growers. As of mid-March, Crawford and Ramirez, who started their first test plot of hops in 2013, were unsure about whether they were going to grow hops this year as the market has been so hard.

Crawford says she would like to see the provincial government introduce a special label or designation for beers that have been brewed using a certain threshold of local ingredients. “That’s something that’s really missing in the craft beer industry,” says Crawford. “A brewer could put two pounds in their mix and say ‘I’m brewing with Ontario hops.’”

Some growers have also been pushing for provincial governments in British Columbia and Ontario to implement incentives for breweries who use a significant percentage of local ingredients, similar to tax breaks that have been introduced in New York state.

Crawford says these kinds of incentives could make a big difference for local growers, as some brewers turn their noses up at Ontario hops, simply because they taste and smell distinct from the same varieties grown in the United States. This is because the water, soil and other growing conditions are all different, giving Ontario hops their own terroir. There have been a number of initiatives by brewers and growers in Canada to establish the terroir of Canadian hops.

Justin da Silva, the brewmaster at Ontario craft brewery, Matron Fine Beer, sees these differences as a good thing that could make Ontario beer special. Matron uses hops from Pleasant Valley Hops and makes a point of marking the bottom of its cans with the proportion of local ingredients used in that specific beer.

“This is uniquely a product from here and it makes our beer distinctive in its own right,” da Silva says. “Most of the beer industry, especially in Ontario, has this identity crisis, and we’re essentially chasing the trends that the breweries in the United States are setting. If we want our own identity, we need to forge it for ourselves. That’s how new beer styles essentially evolve.”

In British Columbia, there are currently between 10 and 15 hop farmers growing 200 acres, according to the BC Hop Growers Association. This is a significant decrease from 2017, when there were 25 farmers growing 500 acres of hops in the province. Raymond Bredenhof, the chairman of the growers association, says that to succeed growing hops, farmers need to be able to do a number of things very well, which not only include growing, harvesting and processing hops, but also marketing and distributing them. He says that the failed hop farms in B.C. often fell down in at least one of these areas.

Hops are also an incredibly difficult crop to grow, Bredenhof says. “To do it very well, you really need to babysit it. It’s a very assertive plant,” he says. “If it doesn’t get what it wants, it throws a hissy fit and doesn’t perform for you.”

Bredenhof says it can take a while for new hops farms to develop the necessary business relationships with breweries, and that hops are a long term crop. He adds that the farmers in B.C. who have really struggled often lacked a marketing plan, or had some quality issues with their hops. “There are a number of areas where the wheels can fall off,” he says.

For Bickle and others in Ontario who are thinking about closing down their hop operations, quality hasn’t been an issue. Da Silva says that most of the hop farmers he’s been in contact with in Ontario grow great hops, but they aren’t getting the support they deserve. He says that as hop growers come into commercial viability in this young industry, they are simply being short changed.

“Farming is a hard industry to be in, and we as brewers need to support these guys a little bit more,” says da Silva. “It’s good for what we’re doing, and important to support the local economy. It’s a big thing craft beer has championed. When we’re not supporting other producers who are tied into our industry, it’s extremely hypocritical.”

A good article! As a small hop grower, I can attest to the fact that growing hops isn’t easy. On the other hand, as someone without a farming background, it’s also, maybe, a case of farming just being harder than one might think. It’s also a classic business case – a new market and people piling in and supply outstripping demand. The market is now in a “correction” phase and those who stick with it might see better days ahead. For the sake of local produce, let’s hope so. I can add that as a member of the Ontario Hop… Read more »

Processing and pelletizing! It doesn’t matter how great the hops are that are being grown on Canadian hop farms, they don’t have the means (capital investment in expensive processing equipment) to properly package the product they grow. On top of that their sales and marketing are non existent. Countless times I’ve been sent free samples of hops, and then I’ve emailed the farms wanting to buy product, only to never hear a response. What is the point of buying hops at a price of 11-16 dollars, when I can buy a hop at 20-24 dollars that I only need to… Read more »

As a homebrewer, I’d love the opportunity to use local whole hops in my craft. Unfortunately, I’m pretty much limited to YCH pellets in the marketplace.