These Lucky Farmers Tend a Garden on an Isolated Georgia Island

Monica Ponce and Russell Honderd have a dream job. 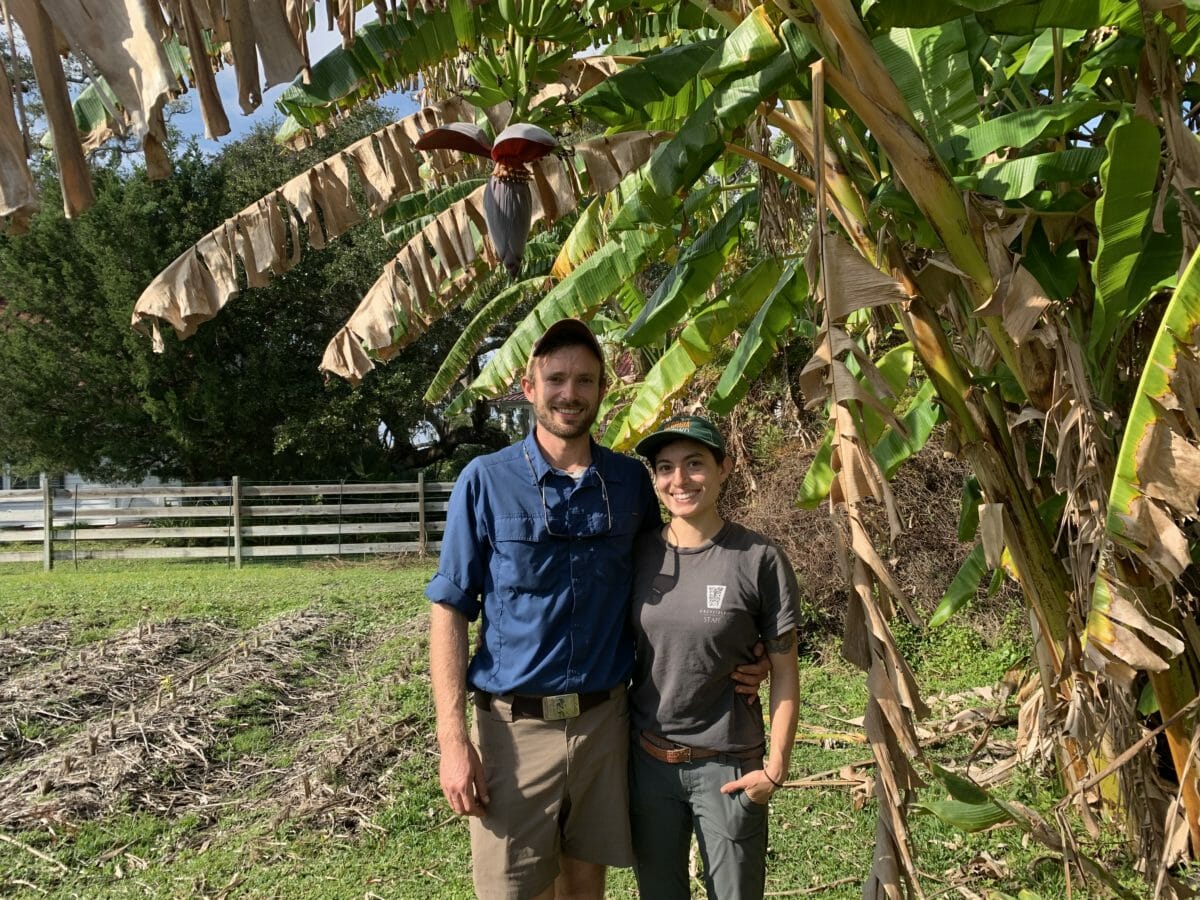 The coast of the southeastern United States is known for its narrow band of barrier islands, places of endless white sand beaches lined with long rows of condos and resorts—Emerald Isle, Hilton Head and St. Simons Island are among the best known. Of the larger islands, only one has been left in more or less its natural state: Cumberland Island, a 17-mile strand off the Georgia coast populated primarily by wild horses and ancient Oaks dripping with Spanish moss.

Cumberland has long been home to a rare breed of human inhabitant as well: the billionaire class. Various Rockefellers and Candlers (Coca-Cola heirs from Atlanta) had winter homes on the island, but the main landowner was the Carnegie family. In the late 19th century, the Carnegies built a 59-room mansion with multiple pools, a golf course and 200 servants. This burned down in the 1950s, and much of the Carnegie land was later turned over to the National Park Service. But their descendants still own a few plots, including the site of Greyfield Inn, a 13-room luxury hotel (the only lodging on the island), where Monica Ponce and Russell Honderd count themselves among the luckiest of small farmers.

The Atlanta couple managed several farms around Georgia before taking the helm of Greyfield’s one-acre garden, which keeps the inn’s decadent restaurant supplied with produce. Their other farming gigs didn’t require a 45-minute boat ride to the nearest post office. And they didn’t come with perks like a salary, a 40-hour work week and benefits—unheard of for upstart organic farmers.

“We used to spend our weekends selling at farmer’s markets. Here we have a built-in market: the kitchen,” says Ponce.

“It’s the best agricultural job in Georgia,” Honderd adds, plucking an orange and slicing it open for me as we wander through the gardens.

I’d come to Cumberland for a mid-winter retreat. The first morning, as I walked from my cottage to the main inn building for breakfast, I passed a small white horse—not a foal, but not quite an adult—ambling through the mist beneath an oak tree with a trunk the diameter of a hot tub, its branches curling down to the ground in a sprawling canopy the size of a three-bedroom home. 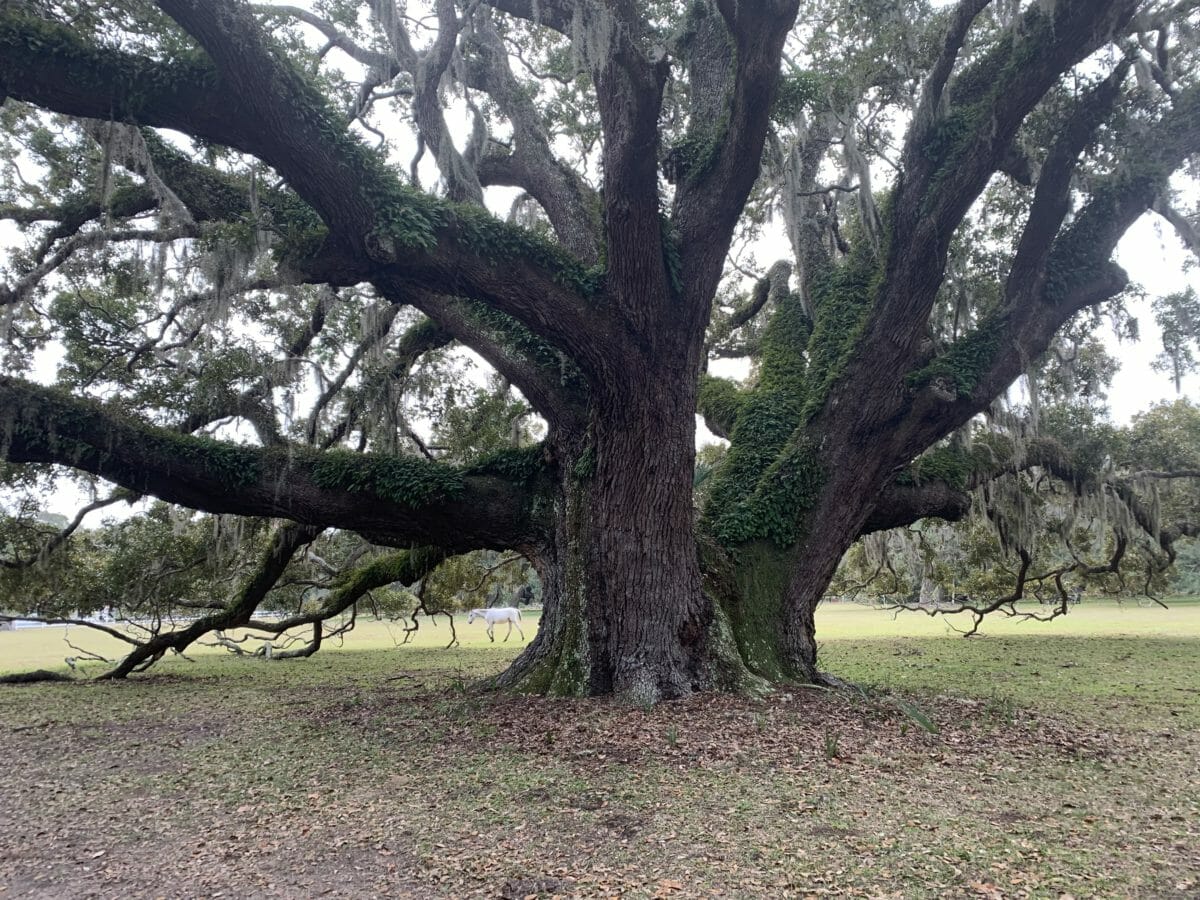 I quickly learned that such surreal scenes are the standard backdrop on Cumberland. In summer, giant sea turtles lay their eggs on the beach, the hatchlings emerging by the thousands in the moonlight. Armadillos are found rooting for insects along nearly every trail, with scarcely any concern for hikers passing a few feet away. The horses are just as bold, paying me no attention as they pass me on the island’s sandy paths, on their way to who-knows-what sort of horse business.

The horses are territorial when it comes to others, however, forming herds that the alpha stallions will defend to their death. One herd lives on the land around Greyfield Inn, where the workers have given them names like Bonecrusher and Bandit. Jack, the head of the herd, had a dustup with an insurgent stallion not long before I arrived.

“Jack kicked it in the head and killed it right there in the middle of the lawn,” says Honderd, pointing to the spot. The inn’s well-to-do patrons—rooms start at $625/night, food and private ferry ride included; jacket required for men at dinner—were horrified.

“It’s like Jurassic Park out here,” Ponce adds, pointing to a marshy spot a couple of hundred feet away where she informs me two alligators reside.

The inn, which is still owned by Carnegie descendants, was once known as a stuffy place where old-money southerners go—the décor is still heavy on taxidermy—but it’s recently become a bit more hip, thanks largely to Whitney Otawka, the tattooed young chef who took over the dining program in 2015. Otawka, who trained with Hugh Acheson at Five & Ten in Athens, Georgia, and later rose to notoriety as a Top Chef contestant, recently published The Saltwater Table, a cookbook themed on the island-to-table cuisine for which she’s become famous.

Otawka incorporates lemongrass, coconut milk and Caribbean spices in her food, along with local sheepshead fish and celery microgreens, which I nibble for the first time as Ponce and Honderd walk me through their greenhouse. The warm winter sun soothes my Toronto snow-weary bones. What an idyllic life, I tell them. But that’s not necessarily the case when you work outside year-round, they tell me. Winter is lovely, but by March, the sand gnats come out. Then come the ticks that cling to each other by the thousands in little writhing balls, waiting for you to pass on the trail. By mid-spring, the mosquito swarms have set in.

“And then, once it hits 90 degrees, you start getting the big mosquitoes that can bite through jeans. Then the biting flies come,” says Honderd. “You can almost tell the temperature by what’s trying to suck your blood.” Paradise is forever fleeting.

Would love to learn more of their story 🙂