Experts say it could happen. 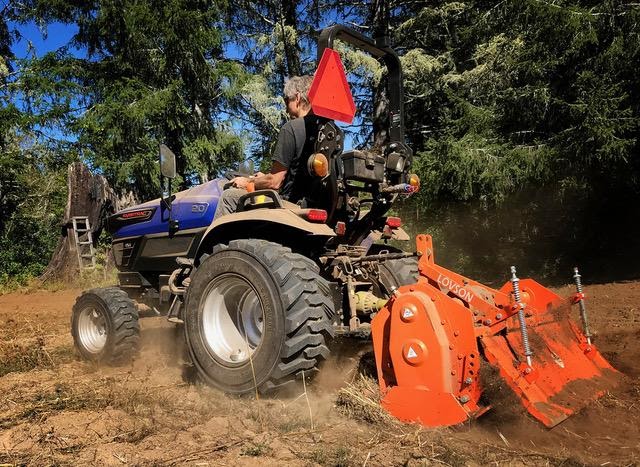 Stephen Heckeroth’s desire to help the planet has seeped into the world of agriculture.

The California designer has devoted his life’s work to finding alternatives to fossil fuels. He’s spent more than four decades creating electric vehicles and homes powered by solar energy. He recently turned his attention to tractors.

Heckeroth began focusing on modes of electric transportation in the 1990s. He says it didn’t take long for him to realize that the weight of electric batteries, perceived to be too heavy for cars, could be used for tractors. The extra weight, he says, allows the machines to gain better traction and stability.

In 2012, Heckeroth launched Solectrac Inc., a company geared towards providing 100-percent-battery-powered electric tractors. Five years later, his two models, the Compact Electric Tractor and the eUtility, became what he says were the first commercially available electric tractors in the US.

Heckeroth says his tractors are climate friendly, quiet and much more efficient than conventional models. He’s been able to sell his tractors to farmers in North America, but he recognizes he’s still establishing himself. Since the launch of Solectrac, a number of other companies such as Motivo Engineering, John Deer and AgCo have been working on their own interpretations of electric tractors.

But do electric tractors have the power to overtake conventional models? Experts in the agriculture industry believe there are a few barriers that are preventing this eco-friendly option from catching on. Mike Pankonin, senior director of technical and safety services at the Association of Equipment Manufacturers, says the largest problem with electric is that they don’t have the energy density of a diesel model required to do long, hard work in the field.

As battery life is dictated by load, pulling a tank or a piece of tillage equipment would drain power much faster, as opposed to mowing grass or carrying something much lighter. And for most conventional models, a farmer won’t have to worry about filling the tank for 10-12 hours while on the job.

“People don’t want to have to refuel at short intervals,” he says. “It’s really hard to beat the speed of pulling up to a pump and putting enough energy in your machine to operate for yourself, a full shift or full day, in a very short period.”

Pankonin adds that it’s not impossible for this limitation to be addressed, but new technology is needed.

Heckeroth’s Solectrac models have a replaceable battery pack. He says a quick exchange of a battery pack addresses the wait time for the machine to fuel up. His tractors are advertised to have a battery pack run time of three to six hours, depending on the load. His electric inventions also don’t idle and it can be turned off, so that power isn’t wasted, and the charge can last longer, he says.

In 2017, Heckeroth’s tractors were tested by the University of Nebraska Tractor Test Laboratory, which found the machines performed well. Dr. Roger Hoy, the director of the laboratory, told Heckeroth in a letter that they could be the future of agriculture, but he still has some concerns about whether electric tractors can provide sufficient battery power yet.

“I don’t think the battery technology is quite there yet,” he says. “They’re going to have to fully demonstrate that they have the same capabilities of the conventional diesel-powered tractor.”

He adds that it’s more likely that hybrid models take off before full electric models become widespread. It would be a happy medium between reducing fuel emissions while still packing much needed power until the technology catches up.

Another barrier might be cost. Hoy says the price of tractors needs to be affordable to the average farmer, but Solectrac tractors currently sell at $45,000, about a third of the price higher than current diesel models.

Tractors like Solectrac’s do have the potential to become popular in niche markets such as vineyards, Hoy adds, as the work isn’t as machine labour intensive and the industry is more lucrative. There are also government-funded incentives for using electric vehicles in agriculture in some states such as California.

Heckeroth admits that it will probably take some time to win over the entire farming community with his tractors, as many farmers are used to doing things the way they have always done them.

“They’re going to be later adopters,” he says. “But I hope people will start thinking about their kids and climate change. And even if you don’t think about the environment, electric tractors are head and shoulders above diesel.”

Electric vehicles require proper disposal of batteries and that recurring cost, including it’s environmental impact, never seems to be factored in. Farmers tend to just pile things up in sheds or barns for years. What does surprise me is that hydrogen fuel cells haven’t made it to farms. Must farms have large diesel tanks on site and hydrogen could be delivered through the same means as propane, heating oil, and diesel.

Maybe they have considered installing solar panels for recharging of the batteries whilst the tractor is in operation ?

What these people touting electric vehicles seem to keep forgetting, is it takes fossil fuels to generate the electricity needed to charge these vehicles. Let’s not forget about battery disposal, too. And what will the cost of this new electric machinery mean to the cost of the food being grown? Someone needs to truly think all this through, before drafting legislation to make electric vehicles mandatory.

Electric Tractors just ain’t a sustainable source because they need so much power to pull tillage equipment or a grain cart or something. Diesel really dont put out that much emissions without the EGR stuff than a gas because they have a more complete burn than a gas engine. Diesel will never be able to be replaced in tractors or semi trucks in my opinion