How to Plant a Fruit Tree - Modern Farmer
How-To, Plants

How to Plant a Fruit Tree

Five pro tips for starting a home orchard this winter. 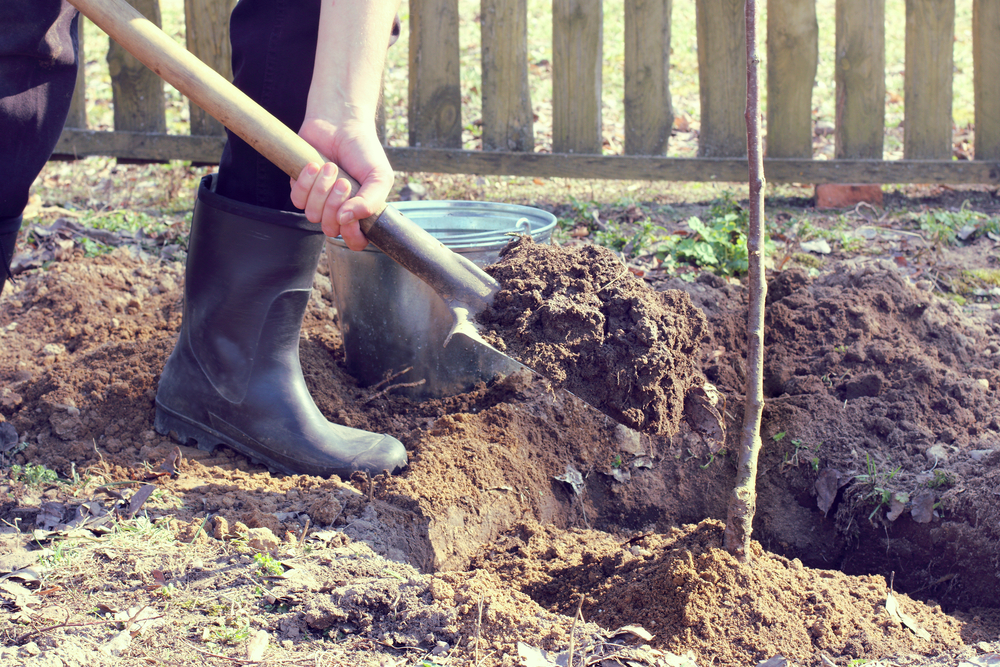 When planting a lettuce or pansy seedling, you just scoop open a hole, plop it in and cover the roots. Planting trees is far more complicated, especially when it comes to fruit trees.

Start Early
It’s best to plant fruit trees in late winter or early spring before they emerge from dormancy. During this time, they may be purchased “bare root”—sans soil, that is—from mail order nurseries. How early you can plant depends on where you live, but it’s essentially a matter of the ground no longer being frozen. Give the nursery your ZIP code and they will tell you the earliest window that it’s safe to ship the tree.

Find the Right Spot
Fruit trees need a minimum of six hours of sun, and ideally eight hours or more. Soil that drains quickly after a rain is essential; otherwise, fungal diseases are likely to set in. Microclimate is extremely important. Heat-loving fruits such as peaches work best against a south-facing wall that will amplify the sun’s rays. Species such as cherries that require a high degree of “winter chill”—a horticultural term for the number of hours below 45 degrees that some fruits require each season in order to produce—are best with a cooler northern exposure.

Dig the Perfect Hole
Bare root trees don’t need a huge hole. It just needs to be big enough to hold the roots. More important than size is to create a planting environment that keeps the tree from sinking into the ground, which often occurs as loose soil settles beneath it, leading to moist soil around the base of the trunk—a common mistake that promotes disease. Dig only as deep as the roots are long and then form a cone of soil in the center of the hole over which the roots can splay. This provides support to keep the trunk from sinking later on (pack the cone of soil with your feet so that it doesn’t settle). Most fruit trees are grafted about eight inches above the root system—orient the tree so that the graft “wound” (the knobby area where the cut was made) faces north, where this weak link in the trunk will not be exposed to the scalding sun. Fill the hole with the remaining excavated soil and then use a heavy stream of water from a hose to wash it into place around the roots, helping to eliminate air pockets.

Set It Up for Success
After planting, dig a broad, shallow basin in a four-foot diameter donut shape around the tree, forming a low berm on the outside edge of the donut to capture rainwater and encourage it to percolate into the root zone. Spread a two-inch layer of compost over the donut area, followed by a two-inch layer of wood chip mulch on top (but don’t pile it directly against the trunk). This blanket of organic matter will feed the roots for years to come, while buffering them from heat and drought. Finally, pound a pair of stout wooden stakes into the ground on either side of the tree and tie the trunk to the stakes so that your young sapling doesn’t blow over in high winds (use old pieces of garden hose or plastic tubing over the rope or wire where it contacts the trunk to protect it from chafing). After two years, the tree should have a strong enough root system to hold its own and the stakes may be removed.

Excellent advise you might want to mention that adding fertilizer to the hole will impair long term root growth. Also that if you use healthy trees you shouldn’t need to stake them.

Many things left out of this article. The rootstock of the tree is most important, especially with apples. Different rootstocks will have a different growth effect on the tree and all dwarfing rootstocks will need some kind of support. Also, apples will need some kind of cross-pollination in order to bear fruit. It is more important to have the graft union as high above the soil line as possible than it is to “orient it to the north. Protection from rodents and rabbits is very important when the tree is young or you could find the trees girdled when the… Read more »

A little more detail would have to be added : if you can , make the pit at least one month earlier . It is very important to form a suitable bacterial microclimate !

Great post! I live in central Massachusetts and we often get winter winds that’ll snap our 4″X 4″ fence posts off at ground level. No telling what they’d do to a new sapling. Staking is excellent advice for a noob like me!

I would like more information about pruning and do I need 1 tree ot 2. Thank you.

In planting a fruit tree, you must really find the perfect spot where it must be planted so that it will grow healthy.

my land is in Kashmir and there is not sun light more than 4 Hrs in winter season cause of Mountain area. which type of tree plant in this area are suitable.