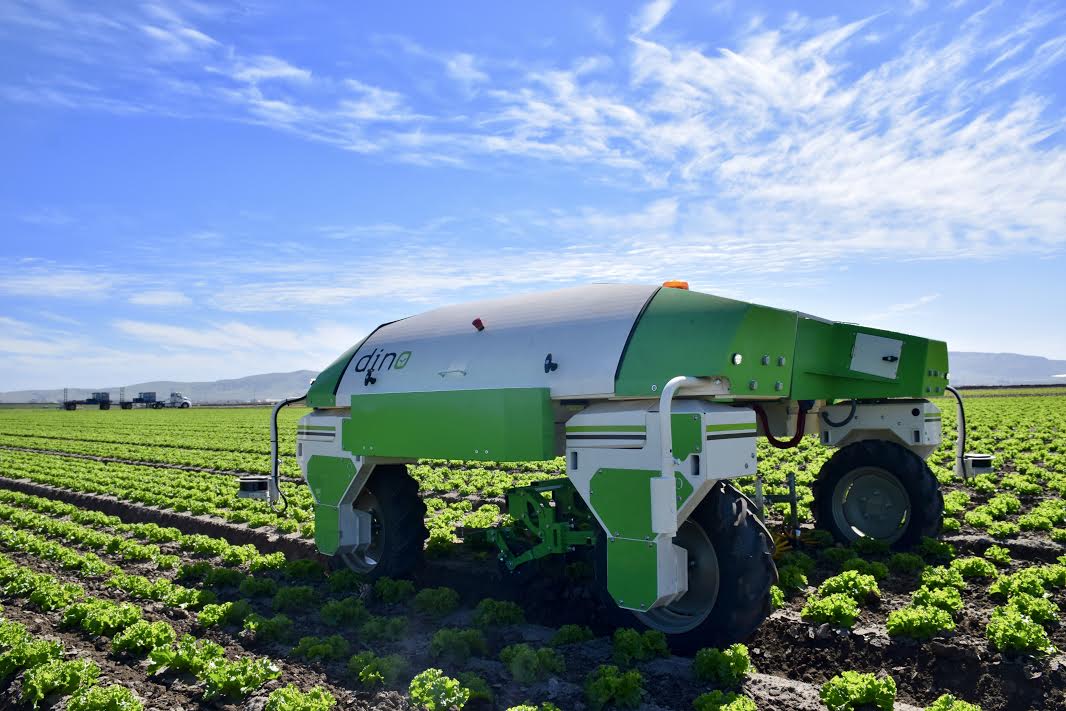 For sustainable farmers, hand-weeding can be laborious, backbreaking work and can cost upwards of $300 an acre in labor costs. A French startup called Naïo Technologies is hoping to solve this problem with the first autonomous electric-powered weeding robots for commercial farms. These futuristic robots may look like something out of Star Wars, but they’re here now, weeding row crops and vineyards with their spinning fingers that can cover up to ten acres a day.

“Our weeding robots respect both the environment and man,” Anouck Lefebvre, a Naio Technologies spokesperson, says. “They provide a solution to tackle farmworker shortages, reduce the strenuous physical workload of hand weeding, and limit the use of chemical weed killers.”

The company currently has about 150 robots in use in Europe, Canada, and Japan. Last year, Naio Technologies began testing its autonomous weeding robots in the US, at 15 different commercial farms mainly in Salinas, Santa Maria, and Davis, California. Dino has been used on a variety of crops—including lettuce, tomatoes, garlic, cabbage, pepper, and celery—and in various soil conditions, according to Simon Belin, an experimental engineer at Naio Technologies, who has been testing the robots in the US.

The company recently received an influx of $15.5 million in funding to continue its investment in research and development and to push into the US market, according to Lefebvre. Naio Technologies plans to open a center in California later this year to “store and maintain our robots” and “market the robots to new customers,” she tells Modern Farmer.

There are some other ag robots on the market focused on weed control, such as Ecorobotix AVO,  Franklin Robotics’ Tertill, and FarmWise Labs’ version. Naio Technologies’ robots don’t use chemicals, are large enough for commercial use, and aren’t powered by diesel, Lefebvre says.

Here’s how they work according to Belin: The farmer creates a map of each bed the robot needs to weed using its GPS system, uploads it into Dino through a USB key, puts the robot in front of the first bed and Dino does the rest.

The Dino can go for between six and eight hours, depending on soil conditions and how many of the machine’s tools are in use at one time. The batteries require about eight hours to recharge, but Naio’s engineers are working on speeding up the recharging time.

According to Belin, the growers and farm managers he’s worked with in the US on research and development have been “happy to help us” and are “pretty impressed by the autonomous part of the machine.”

“You just let the machine go, and it cultivates the field,” Dylan Bognuda, a production engineer for Betteravia Farms, which grows vegetables on 9,000 acres in Santa Maria, California, and in Yuma, Arizona, told the website The Counter. Bognuda was surprised by how smoothly Dino ran, unlike some other robots he’d tried.

The Dino costs about $220,000, but the company prefers to rent out its robots, working hand-in-hand with farmers to address their specific needs, and it can also advise farmers on financing options, according to the company. Naio Technologies expects the Dino will be available for purchase in the US later this year.

Beyond weeding, the company has developed its navigation system to be standardized for any off-road robot, so it could be used for a variety of crop types and jobs, according to Lefebvre. “This makes our robots a solid base for precision farming,” she says.

One question that always looms when discussing robots involves the loss of jobs. Lefebvre’s response is that there’s a farmworker shortage in both Europe and the US, so it’s a bit of a moot point.

“It’s really complicated today to find farm labor in Europe and in the US,” she says. “Naïo Technologies has been created to answer this problem and to allow farmers to reduce their physical workload to free up time for other tasks.”

Lefebvre believes that, within ten years,  there will be robots in every agricultural field in Europe and North America. “We recognize that the challenge is very ambitious, but we are convinced that we can meet it alongside our partners and stakeholders,” she says. “Our goal is to ensure the ecological and social transition to sustainable agriculture.”

Naio Technologies’ robot cultivators may compact soil. What can Naio do to mitigate compaction?

The Oz machine sounds like something that would ‘save’ me from having to start using chemical herbicides on our row crop farm. How much of a problem is it to set it for whatever I want weeded? What is a small” farm? What is the price of the Oz?

I’m worry about people who needs the jobs!

We would love to tell you more about Tertill. It’s $350 and can weed up to 200 square feet. Bigger areas can be handled with multiple robots. No need for pre-programming. Place and go. The only thing is it does need a border so it doesn’t escape and if you have seedlings you need to place one of the provided plant guards around them until they grow a couple of inches. The technology was found as effective as hand weeding by Cornell School of Ag. and it is consistent with no-till strategies. In fact you can keep it in place… Read more »

I can see autonomous harvesting machines not too far down the road.

$220K is cheaper than paying someone?

How about no till instead to reduce weed growth? Success has been had on many large scale row crop farms.