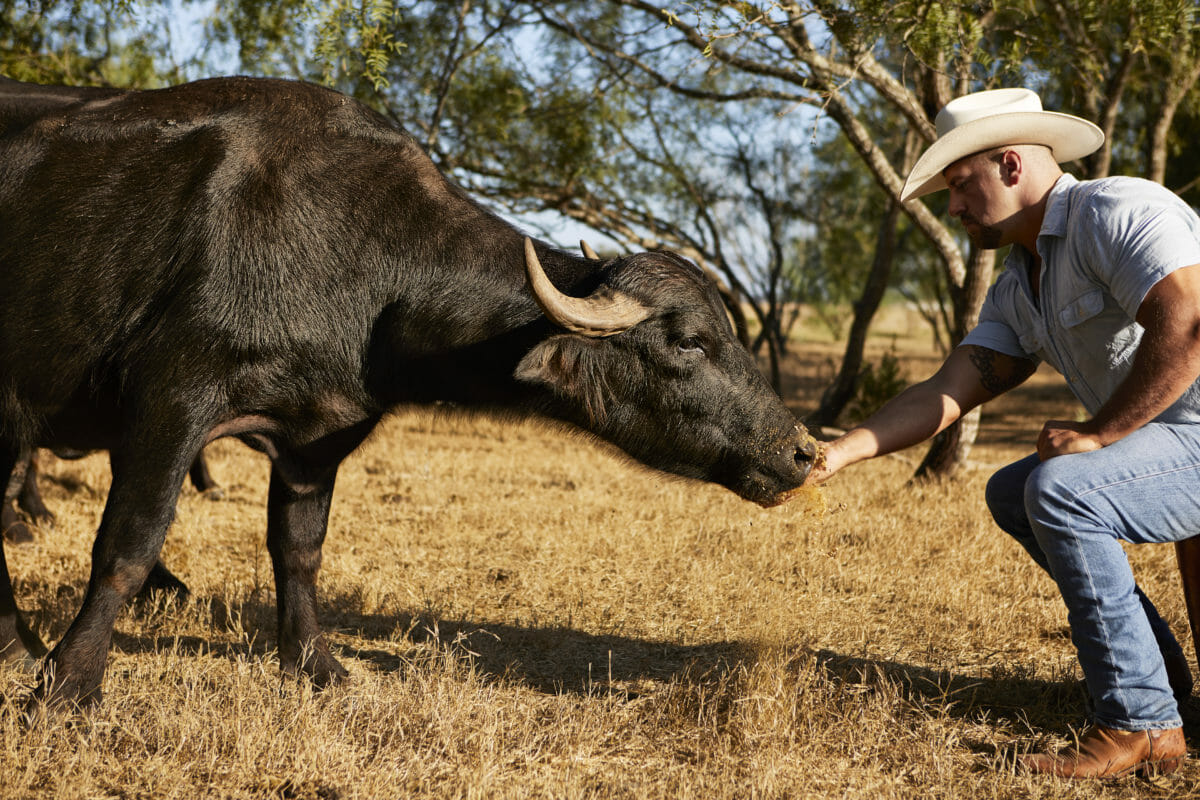 Phil Giglio has been building his water buffalo dairy operation over the last year and a half.
Photography by Jody Horton.
Share
Tweet
Pin
Email
333 Shares

A year and a half ago, the Chicago lawyer traded his big city life for one with greener pastures and decided to embark on an adventure in agriculture.

Giglio, who grew up on a farm in upstate New York, says he became burnt out from working in corporate law for years and longed to return to his country roots. “I knew I wanted to do something in agriculture, but I wanted it to be something that other people weren’t doing,” he says.

He didn’t have any animal husbandry background, or any experience with making cheese. But he was inspired by the time he spent living in Salerno, Italy, home to his paternal relatives and where the tradition of making mozzarella di bufala with water buffalo milk began. Giglio thought he could introduce this cheese to a new area.

In 2018, he bought some land in Fredericksburg and later acquired a herd of 130 water buffalo. He is still working remotely as a lawyer while he pursues his dairy dreams. Despite having never lived in Texas before, Giglio says he chose the state because some of its geography and typography matched that of southern Italy.

While there are water buffalo farms sprinkled across the US, they are still a novelty in the lone star state. Giglio claims his dairy operation, Orobianco Milk Co., is the only one using water buffalo milk that currently exists in Texas. He hopes to start selling his mozzarella cheese and gelato in a creamery, located in Blanco, Texas, to the public within the next month.

While water buffalo milk has a higher butterfat content than cow’s milk, which makes it thicker and creamier, it’s also a healthy alternative, as it has more calcium, protein and iron. It also has less cholesterol than cow’s milk.

“Oro bianco” translates to “white gold” in Italian; it’s also a play on the fact that in Texas oil is referred to as “black gold.”

“We’ve got this really rich, awesome milk that these animals create,” he says.

One major challenge Giglio had to overcome to start his dairy operation was simply finding somewhere to buy the animals he needed. He canvassed the country for farms selling water buffalos used for dairy, but he had little luck. He found his herd of 130 months after his move at a farm in upstate New York that was going out of business.

When it comes time to open the creamery to the public, Giglio says, he’s looking forward to sharing a unique piece of Italian food and agriculture with Texans that is very personal to him.

Where is a link to your site? How do I buy this.

Water buffalo milk is in fact a great product! If you’re in Pennsylvania, look up Buffalo Valley Pastures – it’s a fully grass fed water buffalo and beef farm that has raw milk available for pick up at the farm. In Pennsylvania it is fully legal as long as a farm has a permit from Department of Agriculture.

I’m highly interested, but only if it’s to be an organic/grass fed product that isn’t pasteurized.