How to Use Goats and Sheep to Clear Brush

Three things to consider before bringing home a herd. 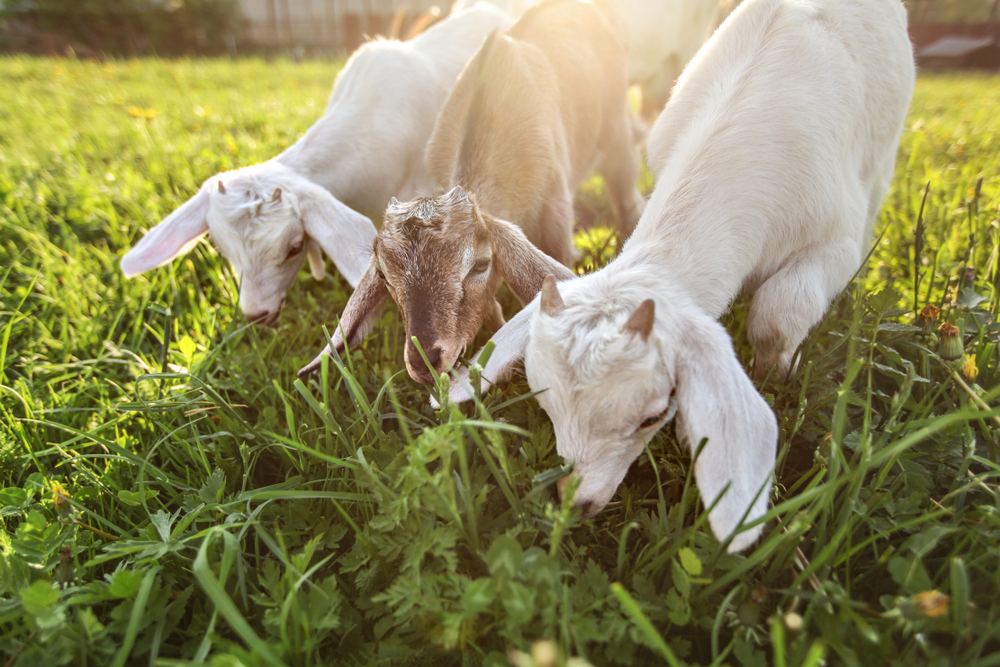 In addition to bearing adorable offspring and delivering the raw ingredient for delicious cheeses, the beautiful thing about goats and sheep is that they love to eat the plants that people are forever at war with, like kudzu, poison ivy and blackberry brambles. Years ago, I had a herd of dairy goats and kept getting requests to “rent” them out for this purpose, which became a side business for my farm for a couple of years. Zach Richardson, one of my co-conspirators in this enterprise, runs a livestock rental company called the Nashville Chew Crew and was recently profiled in the New York Times with the headline “Make America Graze Again.”

The trend has gone viral to the point of creating a new industry — you can now find livestock rental services in many American cities. Landowners across the country are investing in herds of their own to control invasive vegetation rather than using herbicides. Cute animals clearing acres of brush while fertilizing the earth as they frolic to and fro may seem like an ingenious land-management solution. But as with any miracle cure, this one can create as many problems as it solves. Whether you’re considering using a rental service or investing in a herd of your own, here are a few pointers to help maximize your success.

It’s important to know the difference between the two species and which is best suited for the habitat you have in mind. Goats will eat grass and ground-level weeds, but they prefer taller, woodier vegetation and will stand on their hind legs to strip foliage and bark from them, weakening and eventually killing the plants. Sheep will eat woody vegetation but prefer grass and weeds on the ground. Sheep are like lawnmowers, while goats are more like Bush Hogs (for the uninitiated, that’s the brand name for a machine designed to clear heavy brush).

Staking livestock to a rope and expecting them to clear vegetation is ineffective and can result in animals dying of strangulation. You need fencing, which will likely cost far more than the animals to install. Some modern shepherds and goatherds rely on lightweight, movable electric fencing, but this is prone to disaster — it easily shorts out in rainy weather, and livestock (especially goats) are notorious for escaping if given enough unsupervised time. Don’t take your chances with electric fencing unless you’re in a location where periodic escapees won’t be a problem. Ideally, use four-foot-tall wire fencing to form a perimeter. It’s best to use electric fencing to subdivide a larger area into small plots for concentrated grazing. Also, be sure to fence the animals out of waterways and other sensitive habitats.

Unlike herbicides and machinery, sheep and goats need clean water, shelter, grooming, health care and a bit of TLC. They may also need supplementary food — if they’re penned in an area populated by a limited number of plant species, it’s wise to provide a scoop of commercial feed to each animal in the morning and evening to ensure that they’re getting the full spectrum of nutrients they need (the extra calories are essential for pregnant and lactating animals). Also, expect the unexpected: Dogs and coyotes may attack; teenagers may play unseemly pranks; and animals may turn up sick, injured or dead for any number of reasons. Make sure that you are prepared to provide the necessary husbandry for these robust yet vulnerable creatures.

Forage and browse and easily provide the energy and nutrients that a goat needs during pregnancy and lactation. What might need to be provided is minerals and salt. Goats don’t typically need grooming unless I guess you are raising the fiber producing breeds such as Angora. In my experience if you have a goat that needs grooming you have a sick goat. Electric netting works pretty well and they have improved the netting choices and quality. I did stop using electric netting for my goats as it was a pain to move. I instead divided my grazing areas by putting… Read more »

Been using portable electric netting fencing to move my goats to eat brush with no issues for 3 years…so disagree here.

HireGoats.com has resources and a map of existing goat rental companies.

This is not true! I have hampshire sheep and they will clear brush better than a goat! Also katahdin sheep naturally eat more brush than any goat breed and you don’t have to worry about shearing them, as they are hair sheep.

Has the Ca Dept of Forestry looked into using them, to clear fuel from roadsides in areas where there will be wildfires??? Last year’s wildfire in Paradise CA. is a good example where the road would have been clear of fuel to use as an escape route.

Not mentioned about fencing: the most effective way to control animals is to make life more attractive inside the fence than outside the fence. If you plan to put your goats right next to your tasty vegetable garden, you not only need 5’6″ page wire on 10′ T-posts, pounded 2′ into the ground, but I’d string an additional wire on top of that, and run two strands of electric at 9″ and 36″ on the inside, because you’ll need to keep the goats from going over, under, and through! Without the electric, they will try sticking their noses under, and… Read more »

I agree with a lot of points in this article. I recently became the proud owner of WestSide Goat Girl, LLC in Portland, OR and we use our goats to clear brush, blackberries, ivy, poison oak, scotch broom and other invasive species. We’ve learned a lot about caring for the goats, the dos and don’ts of electric fencing, etc. What I love most is the joy the bring to our customers and the fact that more and more people are choosing to “go green” and not use chemicals. check us out at http://www.wsgoatgirl.com