Book Excerpt: “Protecting Pollinators: How to Save the Creatures that Feed Our World” - Modern Farmer
Lifestyle

Book Excerpt: “Protecting Pollinators: How to Save the Creatures that Feed Our World”

In her brand new book, beekeeper and author Jodi Helmer explores why pollinator decline has become so dire and how it can be reversed. Drawn from intense research, Helmer breaks down the science in plain language so we all understand what’s at stake and what we can do to help. There are promising initiatives, inspiring stories, and the book ends with a couple dozen actionable ways that readers can get involved with pollinator protection. (We’ve also got tons of ideas on our site.) – Amy Rosen 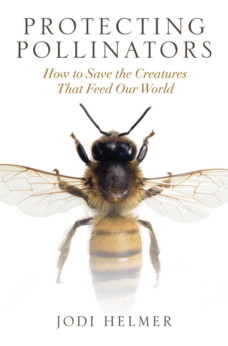 This important book is now available.

In the race to save pollinators, even the ancient hobby of beekeeping has come under fire. Critics warn that domesticated honey bees are detrimental to wild pollinators. In fact, a 2018 study published in the journal Science was titled, “Conserving honey bees does not help wildlife,” and suggested widespread efforts to tend European honey bees were misguided.

Instead of treating honey bees like pollinators, a growing number of researchers have suggested seeing them as livestock, noting that both managed colonies and cows, pigs, and chickens raised in cramped conditions face similar issues: Overcrowding and homogenous diets depress their immune systems and increase pathogens. In one meta-analysis, more than half of studies found competition for resources had negative effects on wild bees. (The research did not measure the direct effects of honey bees on wild bee fitness, abundance, or diversity; managed hives located in their native ranges had a lower impact on wild bees than those in hives situated in non-native ranges).

“Much of the discussion and the debate around pollinators and pollinator health over the last 10 years has really been driven and fueled by the honey bee… I think those of us who have worked on pollinator ecology for a long time, we feel a certain amount of affinity for the honey bee. But out of the whole range of pollinator issues, the honey bee is doing fairly well compared to some species. The honey bee is not going extinct anytime soon,” says Eric Lee-Mader, co-director of pollinator conservation at the nonprofit Xerces Society.

Thanks to the focus on honey bees, Lee-Mader believes that native pollinators might not get enough credit for their role in crop pollination. He cites squash and pumpkins as examples of crops where native bees outperform honey bees. But farmers often don’t realize this, paying for hive rentals to ensure pollination takes place, even though native bees are more than equipped to do the work.

Lee-Mader notes that the native bees tend to be active early in the morning, often before the sun has fully risen, so farmers don’t realize they’re getting a free service. He hopes beekeeping can evolve so people understand that honey bees are not the answer to every pollination challenge. We can’t keep ignoring the larger health of the natural environment.

“Unfortunately, when we look at beekeeping, especially large-scale beekeeping, there tend to be a lot of problematic and troubling questions that arise,” he adds. “The honey bee, unfortunately, suffers from the challenges that have arisen from within the beekeeping industry like the long-distance movement of bees…that has facilitated the spread of bee diseases.”

One serious concern is the spread of pathogens between managed bees and wild bees. The majority of studies on the topic have found potential harm to wild species. The possibility that honey bees could be contributing to the decline of their wild brethren led researchers to test 169 bees from four families and eight genera for five common honey bee viruses…and found that more than 80 of wild bees were diagnosed with at least one virus.

Viruses can be spread when both species visit the same flowers. Moving hives between pollination sites is equivalent to bringing new, non-native species to different areas. These issues led the study authors to suggest that honey bee declines should be seen as an agricultural issue, not a threat to biodiversity. They also argued for policies such as hive size limits, location restrictions, and greater controls of managed hives in protective areas. The authors offered a firm directive, noting, “Honeybees may be necessary for crop pollination, but beekeeping is an agrarian activity that should not be confused with wildlife conservation.”

Christina Grozinger PhD, distinguished professor of entomology at Pennsylvania State University embraces a less hardcore stance on the issue, noting while it’s currently popular to say that honey bees are destroying landscapes, she doesn’t think that the data backs up that view.

“I don’t think it’s a zero-sum game where you have honey bees in the landscape and therefore, the wild bees go down,” she says.

Even though uneducated beekeepers have been called, “one of the largest killers of local bee populations,” most beginners lack adequate support to succeed. Even the most enthusiastic new beekeepers might struggle to maintain their hives without education and mentoring. According to some estimates, 70 percent of new beekeepers quit within the first two years.

Inexperienced beekeepers might not be equipped to recognize and treat pathogens like Varroa mites. Bees from infected colonies will abandon their hives and merge with other colonies. Or when they die off, bees from other colonies will “rob” the honey from infected hives and bring it back to their colonies, spreading disease. Whether or not a colony is healthy can depend on the beekeeper’s background and apicultural practices. Unfortunately, those practices are currently trending aware from good science and management. An article in American Bee Journal notes a “strong mood shift” among aspiring beekeepers. Some want zero interaction with their bees, believing that feeding bees or smoking the hive (to keep bees calm during routine inspections) are acts against nature.

Given the hands-off approach that some new and “natural” beekeepers take to maintaining hives, it might not be surprising that beginning beekeepers had double the winter losses of professional beekeepers; beginners also had more signs of bacterial infections and heavier Varroa infestations. Pesticides are the sole treatment option for Varroa mites.

Novice beekeepers often want to steer clear of chemical treatments, which puts other hives at risk. Because small-scale beekeepers have hives spread across the landscape—as opposed to concentrated in agricultural areas—starting a hive without understanding how to maintain it increases the risk that viruses will spread. Hobbyist beekeepers have exacerbated the spread of pathogens and resistance to miticides and antibiotics, according to a recent study published in the Journal of Economic Entomology.

Data collected from beginning beekeepers could be making the status of honey bee populations appear direr than is warranted. Reports of abandoned hives led to widespread concerns about Colony Collapse Disorder, but information about losses came from voluntary surveys from beekeepers; beginning beekeepers—whose inexperience leads to greater losses—contributed to those surveys and their die-offs became part of the scientific record. During the 2017-2018 season, backyard beekeepers lost 46.3 percent of their colonies over the winter compared with just 26.4 percent for commercial beekeepers.

Highlighting the possible downsides of good intentions is not meant to dissuade public efforts to help pollinators. Rather, letting concerned citizens know what could go wrong—and providing education and resources to minimize those unintended consequences—can help pollinator populations bounce back. Experts support initiatives to protect pollinators, including some of the potentially “harmful” practices such as monarch releases, maintaining gardens of tropical milkweed, and beekeeping.

“It’s really important to understand the species that you’re trying to protect,” says Sarina Jepsen, director of endangered species for the Xerces Society and deputy chair of the International Union for Conservation of Nature bumblebee specialist group. “Often, we need to act before we fully understand why a species is declining and it’s really important to continue to do research to answer the most relevant questions and to continually adjust conservation strategies as new research becomes available.”

Disappointed. To suggest that the perceived drama of CCD is largely due to bumbling novices distorting statistics is irresponsible. Moreover, Helmer associates natural beekeepers’ resistance to miticides with those bumbling well intentioned novices who are increasing the spread of disease. Her tone suggests that natural beekeepers are about as Ill-informed, silly and dangerous as the anti-vaccine proponants. Michael Bush is just one among many successful natural beekeepers who are hardly novices. Professional beekeepers would seem to have healthier bees, as Helmer presents it. Yet no where does she note that these so called healthier hives are often sustained by bi… Read more »

I would have have appreciated links or info on where to become more informed on caring for bees. It would have capped off a concerned report.
Thanks,
Will

Wow! Thank you for the informative excerpt. Looking g forward to reading the book.