Meet Ken Greene: A Book Worm With a Green Thumb:and a Passion for Seed Preservation

This former children's librarian now runs one of the nation's foremost seed companies. 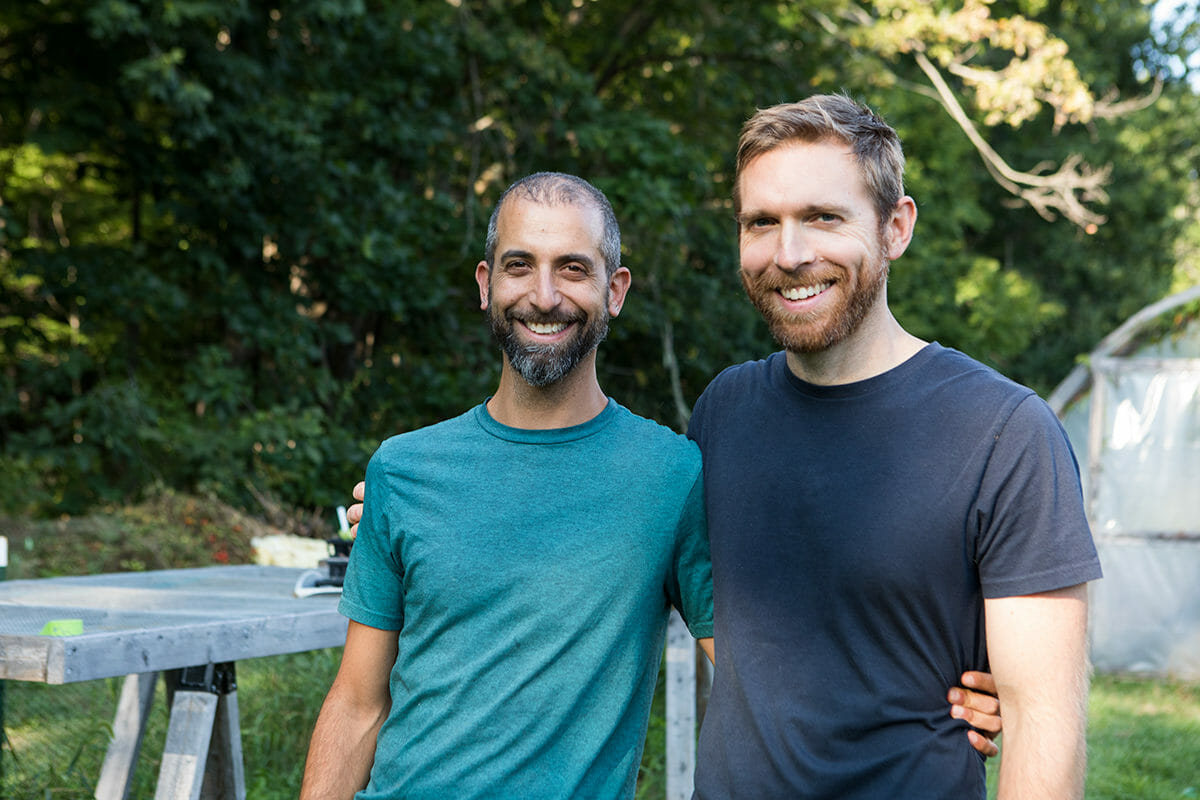 Nope, that’s not a corny joke – it’s the actual evolution of Ken Greene’s career. In 2004, Greene was a children’s librarian at the public library in Gardiner, New York, when he found himself spending most of his downtime geeking-out over heirloom seeds. “I had just started learning about a lot of the issues around the subject, including how biotech has taken over control of seed sources,” he recalls. The more he discovered, the more dedicated he became to preserving rare plants – and sharing them with his community by adding seeds to the library’s catalog. He thought, “Wouldn’t it be cool if the library patrons could check out seeds like they do books?” 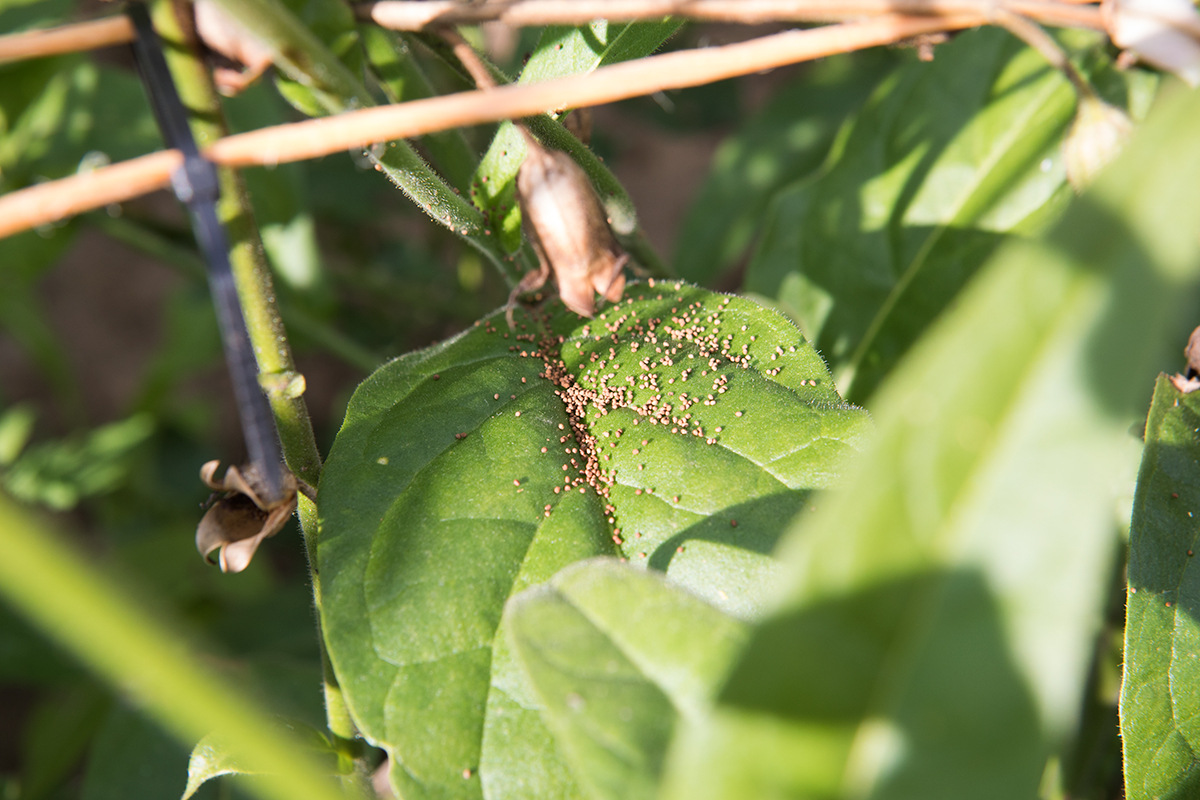 With that goal in mind, Greene began offering seeds for loan at the Gardiner library. Patrons could choose heirloom and organic seeds to grow at home, and at the end of the season, they saved seeds and returned some to the library. “That’s how libraries work,” he says. “You bring back the story, the information, whatever you took out, to share with the community. In this case, it was seeds.” 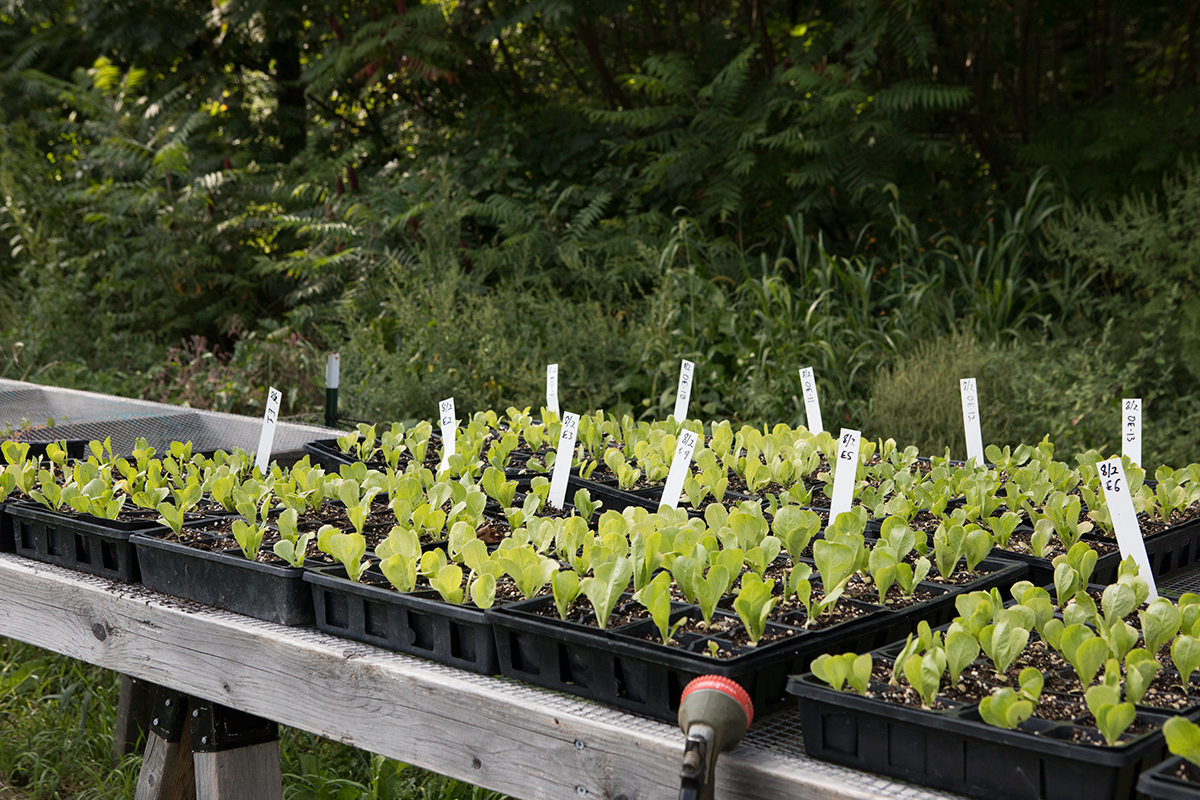 Escarole seedlings work their way through the soil at Hudson Valley Seed Company’s farm. “One of the issues in agriculture right now is that people don’t necessarily see the impact of farming on their lives,” Greene says.

The concept took off in the community and four years later, in 2008, Greene decided to leave the Gardiner library and, with his partner, Doug Muller, start a new business. “We were really passionate about the seed work we were doing, and we thought we could do more if we were doing it full-time together,” he explains. Thus, the Hudson Valley Seed Company (originally called the Hudson Valley Seed Library) was born, and they’ve been a leading purveyor of seeds for organic, heirloom, and open-pollinated plants ever since. 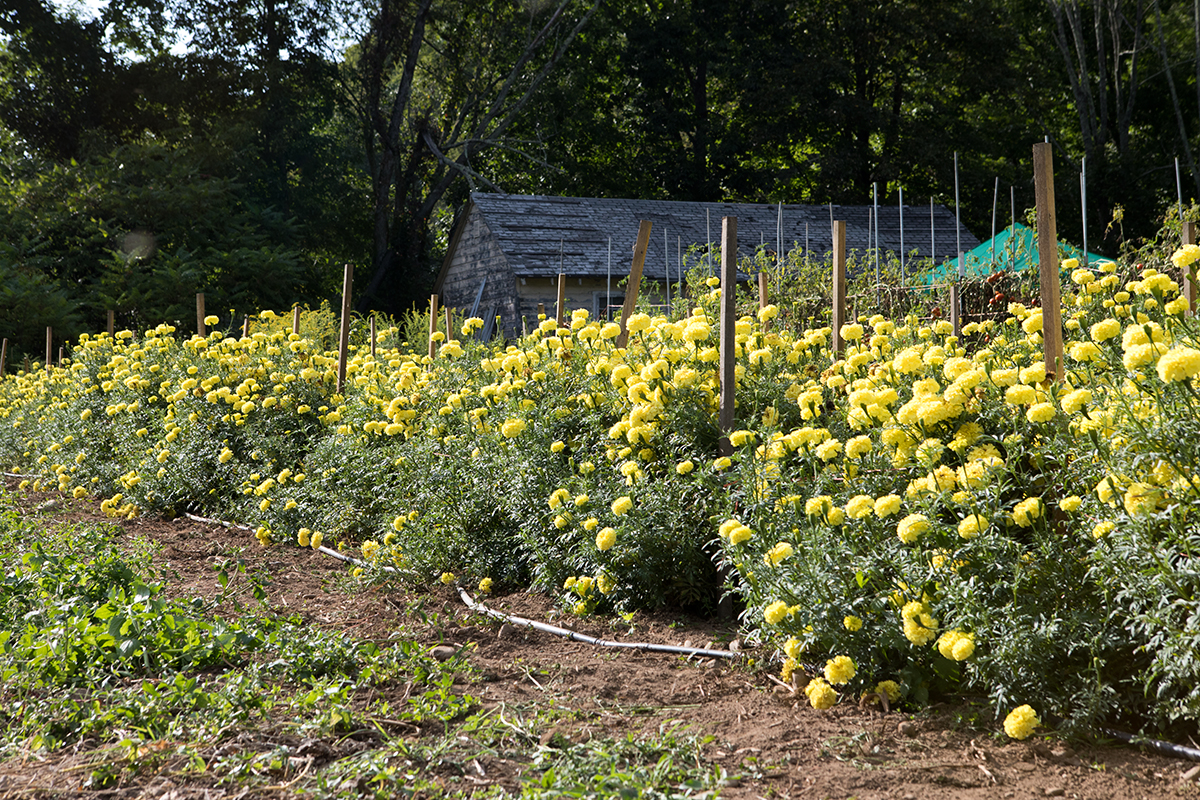 Greene and his team work on a three-acre organic farm in Accord, NY; once a Ukrainian resort, the land now grows many of the seed varieties offered through the Seed Company. (Others are sourced from fellow farmers and seed houses.) HVSC is well-known for its “art packs,” which are designed by a rotating roster of artists. “We celebrate the stories of the seeds by commissioning art,” Greene says. 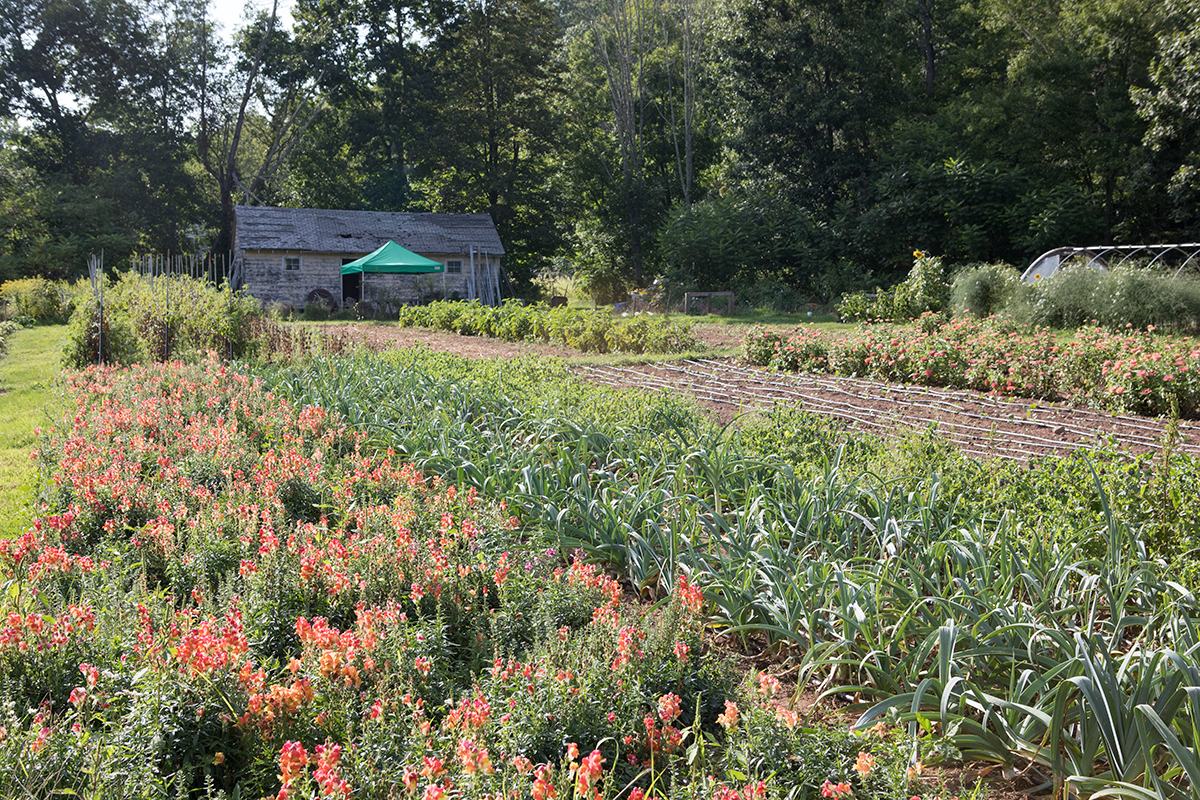 A row of snapdragons in full bloom at the farm.

Heirloom Seeds, Coming to a Shampoo Bottle Near You!

Soon, a custom collection of art packs will reach a broader audience through a somewhat unlikely channel: a new collection of natural beauty products from Seed Phytonutrients, launching in April, 2018.

“I love talking to people who’ve never thought about the role of seeds in their lives before,” says Ken Greene.

During the research and development stage of their beauty line, the team behind Seed Phytonutrients had gotten wind of Greene and HVSC through friends in the know. After learning more about their shared goal of preserving seed diversity, Seed Phytonutrients brand lead Brad Farrell asked Greene to join the brand’s advisory board and meet with its members during a retreat on agriculture, beauty, and sustainability. He was in. “I love talking to people who’ve never thought about the role of seeds in their lives before,” says Greene. “At the same time, I learned so much – I didn’t know anything about formulating a natural shampoo product before. Having so many perspectives was fascinating.” 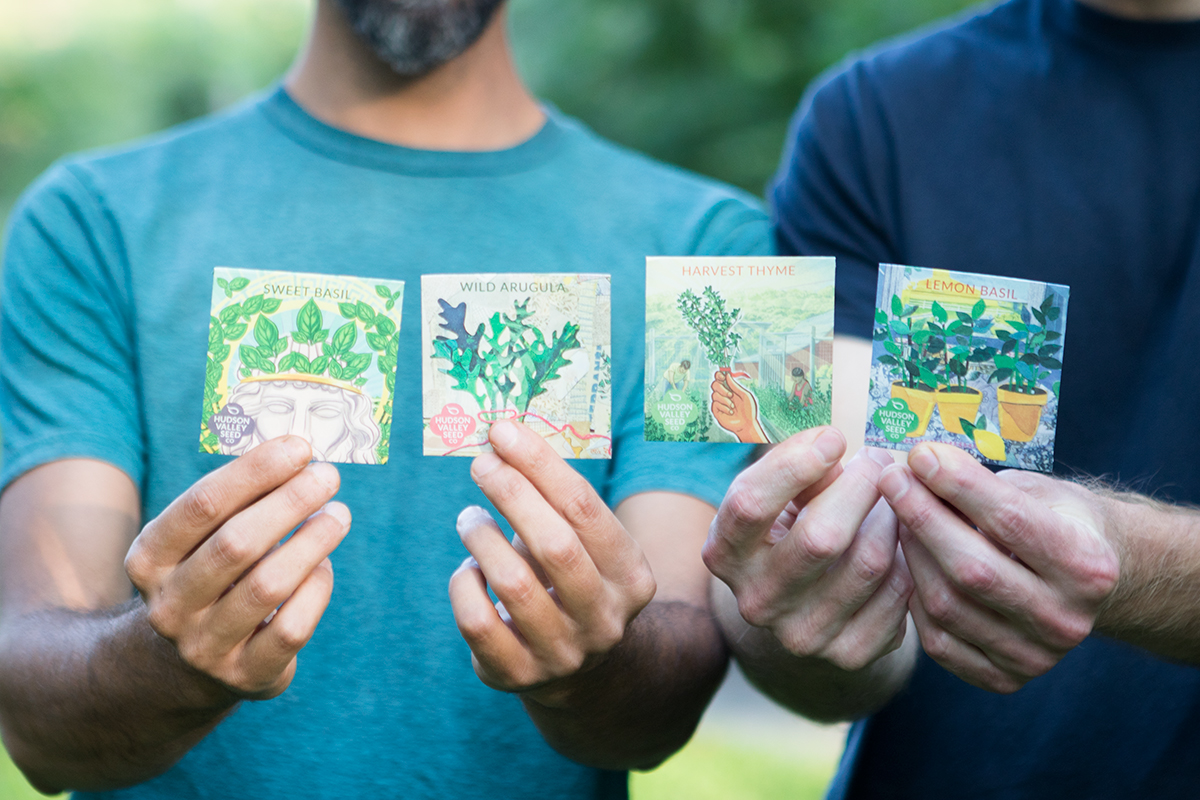 Greene and Muller show off the HVSC seed packs that were designed for Seed Phytonutrients.

To spread the message of seed preservation, Seed Phytonutrients is tucking HVSC art packs inside the (highly sustainable) packaging of some of their products, like shampoo. “They’re Cracker Jack prizes for grown-ups!” Farrell quips. Designed especially for Seed Phytonutrients, these art packs contain one of four varieties of heirloom plants (sweet basil, lemon basil, thyme, and arugula) along with planting instructions and a brief history of the plant itself.

Even when you’re buying a bottle of shampoo that has plant essences in it, before the farmer, there was a seed.

Bonus: These varieties are also easy to grow, no matter your climate, soil, or experience with plants. (After all, Greene notes, just because you’re buying shampoo doesn’t mean you have a green thumb.) At the very least, he hopes that the seed packs will help people see the impact of farming on their lives. “Whether a person plants the seeds or gives them to someone else, I hope they’ll take a moment to read the pack and think about where seeds come from,” he says. “Even when you’re buying a bottle of shampoo that has plant essences in it, before the farmer, there was a seed.”