How to Grow Edible Bamboo Shoots

These graceful, overlooked plants are one of the world's most beautiful crops - and harvesting the shoots is one way to keep them at bay. 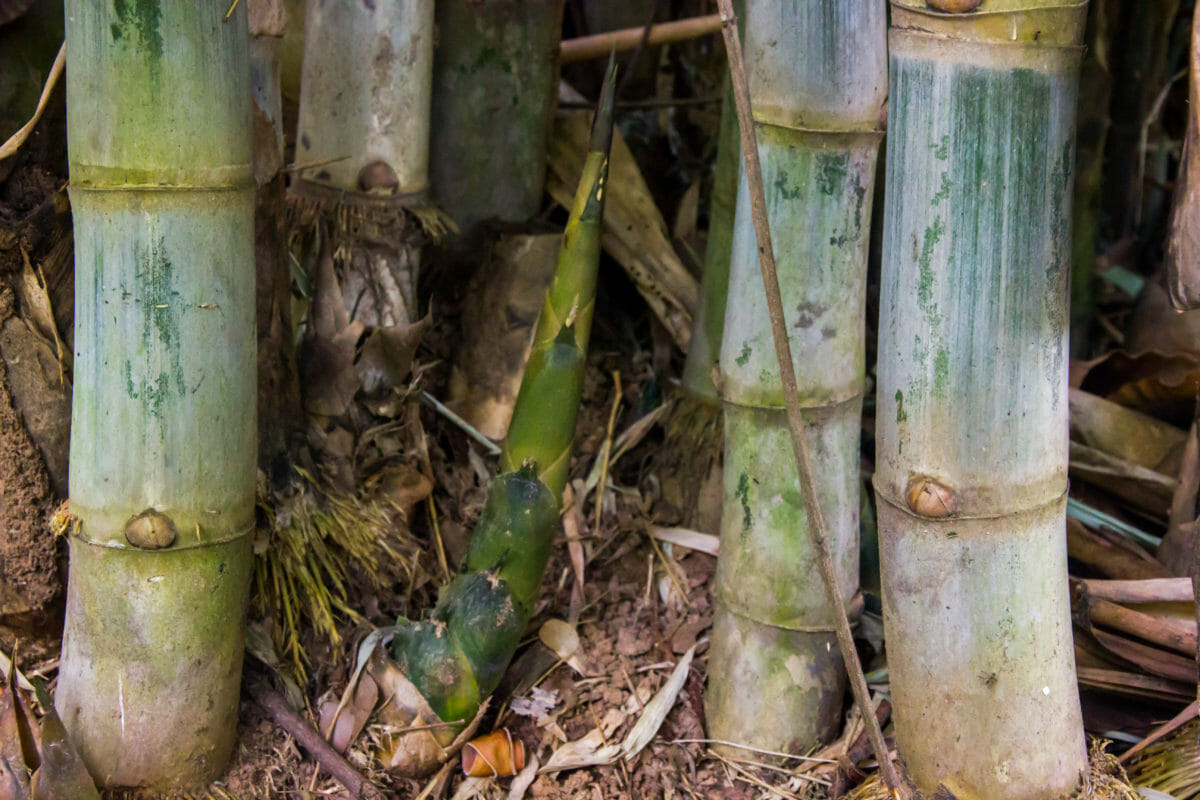 Varieties of Bamboo with Edible Shoots

The edible portions of a bamboo plant are the tender shoots that have just emerged, asparagus-like, from the ground in spring. There are hundreds of species of bamboo, all of which are potentially edible. Some are much tastier and more productive than others, however. Many species produce scant quantities of small, tough, bitter shoots, which must be cooked for a long time to become even somewhat palatable.

If you already have bamboo growing on your property, simply follow the instructions below to harvest and prepare the shoots to see if they are worth eating or not (all bamboo shoots should be cooked prior to consumption, as this neutralizes toxins that occur in some species). If you’re going to plant bamboo specifically for food, choose the species with the most tender, tastiest, and abundant shoots.

Size doesn’t correspond to flavor, though the larger the diameter of the aboveground canes, the larger the shoots, and thus the bigger the harvest. Bamboo species have varying degrees of cold tolerance, so your choice will also be a function of climatic constraints.

Bamboo varieties from the genus Phyllostachys, which are generally cold hardy and produce good quality shoots, are widely considered the best choice for American gardeners. Two of these are known for their exceptionally tasty shoots:

Moso Bamboo (Phyllostachys edulis): Eventually reaching a height of 50 feet or more, with canes up to 8 inches in diameter, this species is grown commercially in Asia for both food and construction material. It is widely available in American nurseries. Hardy to 0 degrees Fahrenheit.

For a comprehensive look at the culinary qualities of various bamboo species, check the list compiled by the Guadua Bamboo company. The company looked at 110 species, designating 33 as “delicious.” In addition to many in the Phyllostachys genus, these include (with their respective cold tolerance and cane diameter indicated): Acidosasa edulis (5 degrees; 2.5 inches); most species in the genus Chimonobambusa (varies, but most hardy to around 15 degrees; .5-1.5 inches), Chimonocalamus delicatus (10 degrees; 1.5 inches), and Gigantochloa levis (30 degrees; 6 inches).

The most cold-hardy bamboo species are found in the genus Fargesia, which includes varieties that are hardy down to -20 degrees. While this group is not generally known for its culinary qualities, at least two species are sometimes consumed: Fargesia spathacea (-10 degrees; .5 inches) and Fargesia robusta (0 degrees; 1 inch).

Bamboo, which is essentially a giant grass, is very easy to grow. Plant it in rich, well-drained soil in a sunny or partly shaded location. Like all grasses, bamboo grows most lushly when supplied with ample moisture. And the lusher the growth, the more abundant, sweet, and tender the shoots. Irrigate your bamboo whenever the top inch of soil becomes dry, or more often if you wish. Just don’t overdo it if your drainage is poor – waterlogged soil is a death knell for bamboo.

As long as you plant it in fertile soil, there is no need to fertilize bamboo. But you’ll produce more shoots if you do – especially with nitrogen-rich fertilizers. While it is tempting to fertilize bamboo with animal manure because of its high nitrogen content, it’s not recommended due to the potential for the shoots to come into contact with pathogens in the manure as they emerge from the ground. Store-bought organic fertilizers are a safer bet.

How to Prevent Bamboo from Spreading

In the world of bamboo, there are “clumpers” and “runners.” The former do not spread aggressively, but form compact clumps. The latter, as the name implies, is what has given bamboo a bad reputation. The species classified as runners spread via long underground rhizomes, sending up new canes all over the place, quickly colonizing large areas.

The bad news is that the bamboo species with the best culinary qualities tend to be runners (the Gigantochloa and Fargesia species mentioned above, both clumpers, are an exception). The good news is there are a variety of ways to prevent the spread of running bamboo. The easiest is simply grow it in pots or raised planters. If you’re growing it in the ground, be sure to install an underground polyethylene barrier to restrict its spread. This should extend at least 18 inches below ground and 4 inches above ground.

Underground barriers, which are expensive and laborious to install, are best suited to small plantings. If you intend to establish a large grove, surround it with a wide swath of grass or other vegetation that may be mowed regularly. By mowing, you’ll keep the canes from becoming established beyond their designated area.

Harvesting the shoots is another tactic for stemming the spread of bamboo into unwanted areas, as every shoot removed is a cane that is prevented from growing.

How to Harvest and Prepare Edible Bamboo

Where can I buy bamboo.