The likely future head of the USDA is the son of a farmer who currently runs a small agribusiness empire in the Deep South. 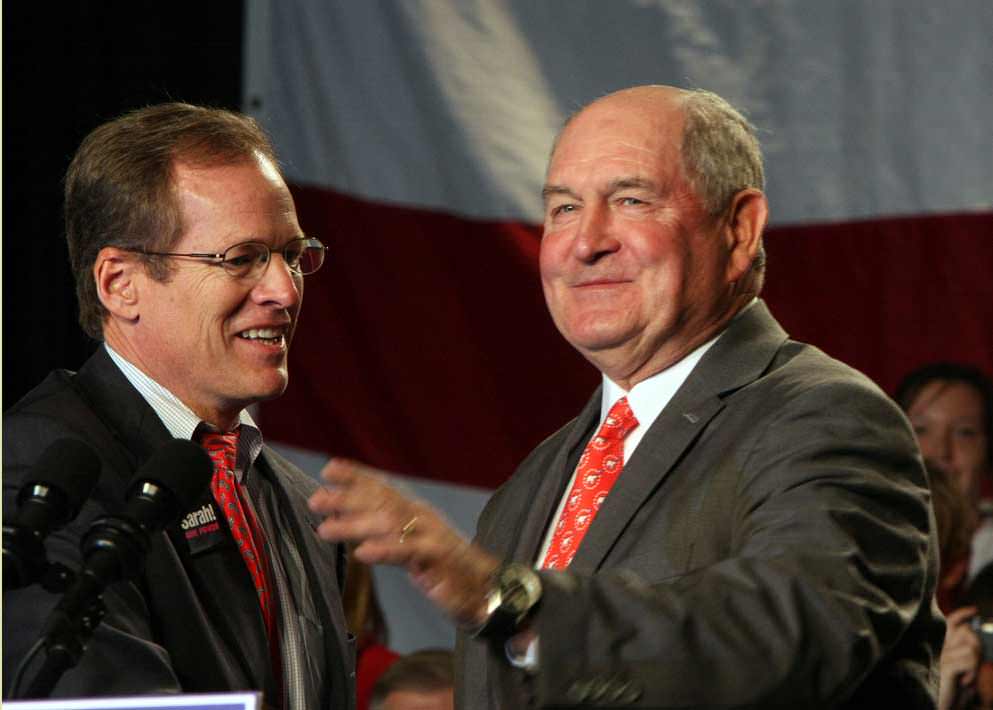 Given that some of Donald Trump’s cabinet appointments—which are well-stocked with billionaire chief executives from major national and international corporations, including ExxonMobil CEO Ray Tillerson for Secretary of State and fast food magnate Andrew Puzder to head the Department of Labor—you might have expected the CEO of Monsanto or ConAgra as agriculture secretary. Instead, the president-elect has nominated a relatively small beans agribusiness executive for the job. His name is Sonny Perdue.

Not that Perdue lacks national stature – he was the governor of Georgia, a heavily agricultural state, from 2003 to 2011. And besides the national prominence afforded any state governor, Perdue garnered widespread attention for his actions in 2007 during the worst drought in Georgia’s history. In June that year he participated in a “Day of Prayer for Agriculture” promoted by the Georgia Farm Bureau. Farmers and concerned citizens gathered in Macon, a small city in the center of Georgia, to literally pray for rain.

By November, rain had still not arrived. So Perdue organized a higher profile prayer event, this time on the steps of the State Capitol building in Atlanta, to ask again. With national news cameras rolling, Perdue urged the assembled crowd to help him “pray up a storm.” Whether prayer had anything to do with it or not, the following month rain returned, and a year later the drought was declared over. With the good news, Perdue’s moment in the limelight passed.

In other words, Perdue’s companies are among the many middlemen in the international commodity foods chain.

The former governor is somewhat of a hero to Bible Belt farmers, making him a solid choice for a Queens-born real estate and entertainment mogul to shore up his rural credentials with this final, long-awaited cabinet appointment. Trump won the vote in upwards of 90 percent of rural counties, making the USDA appointment of particular interest to a large bloc of his supporters.

Other candidates for USDA secretary included Texas Agriculture Commissioner Sid Miller, a highly controversial figure who would likely have drawn intense resistance from democrats during confirmation hearings, and Abel Maldonado, a former lieutenant governor of California, who was purportedly under consideration in part to include someone of Hispanic descent in Trump’s cabinet, which has been criticized for a lack of diversity.

But apparently Perdue, a mild-mannered and reliably conservative politician who campaigned vigorously for Trump, is who the president-elect believes is most capable of “deliver[ing] big results for all Americans who earn their living off the land,” as he said in a statement released this morning.

He eventually launched a variety of other farming businesses, including Houston Fertilizer and Grain, and Agrowstar, both of which supply fertilizer and seed to farmers across the region, and then purchase the grain they produce in order to resell it to larger conglomerates like ConAgra and Archer Daniels Midland. In other words, Perdue’s companies are among the many middlemen in the international commodity foods chain.

Despite his background, as governor Perdue was not know for a focus on agriculture or rural issues, but as a politician who excelled at cleaning up government inefficiency. Of Perdue’s agriculture experience, Danny Brown, the current president of Agrowstar said in a recent interview, “He is well versed in fertilizer, chemicals, grain business and marketing.” While he may have grown up on a family farm, Perdue is clearly more of an industrial agriculture and agribusiness guy. He is on the board of the Georgia Agribusiness Council and the National Grain and Feed Association.

Sustainable agriculture and environmental groups have quickly condemned the appointment. “It’s certainly hard to imagine that a former fertilizer salesman will tackle the unregulated farm pollution that poisons our drinking water, turns Lake Erie green, and fouls the Chesapeake Bay and the Gulf of Mexico,” said Scott Faber, senior vice president of government affairs at the Environmental Working Group, in a statement.

Given Perdue’s conservative credentials and lack of any egregious controversies surrounding him, it seems highly probable that he will be confirmed as USDA Secretary in the coming weeks. He will inherit a Department of Agriculture, led by former Iowa Governor Tom Vilsack, that has made a small, but notable shift toward supporting small farms and sustainable practices over the last eight years. There is nothing in Perdue’s biography that would suggest he will resist Trump’s stated plans to roll back Obama-era environmental regulations, many of which touch on the agricultural sector.

With a $155 billion budget and nearly 100,000 employees, the USDA is not only responsible for the nation’s agricultural landscape, it exerts a tremendous influence on the entire rural economy, and oversees numerous programs that have a significant impact in urban areas, including SNAP benefits and school lunch standards. Many in the sustainable agriculture and “Good Food” movements will be praying that Perdue, despite indications to the contrary, preserves some of the more progressive reforms made at the USDA under the previous administration.

Popular
Why Don’t We Eat Turkey Eggs?Dan Nosowitz
7 Smokable Plants You Can Grow That Aren’t MarijuanaBrian Barth
What’s the Story, Wishbone?Rebecca Katzman
6 Differences Between Llamas and AlpacasAndrew Amelinckx
Goat Sex: Everything You Wanted to Know But Were Afraid to AskAndrew Amelinckx
Explore Modern Farmer
Related
Animals, Environment, Technology
Alaskan Salmon Face a Stream of New MinesBecki Robins
Labor, Politics
For Young Farmers, Land Access Will Make or Break the 2023 Farm...Emily Baron Cadloff
States Mull Limits on Foreign Ownership of FarmlandJohnathan Hettinger
As COP27 Comes to a Close, Agriculture Initiatives Are Top PriorityShea Swenson
wpDiscuz
We use cookies on our website to give you the most relevant experience by remembering your preferences and repeat visits. By clicking “Accept”, you consent to the use of ALL the cookies.
Cookie settings ACCEPT
Privacy & Cookies Policy