Please Allow These Goats to Pick Tarot Cards for You 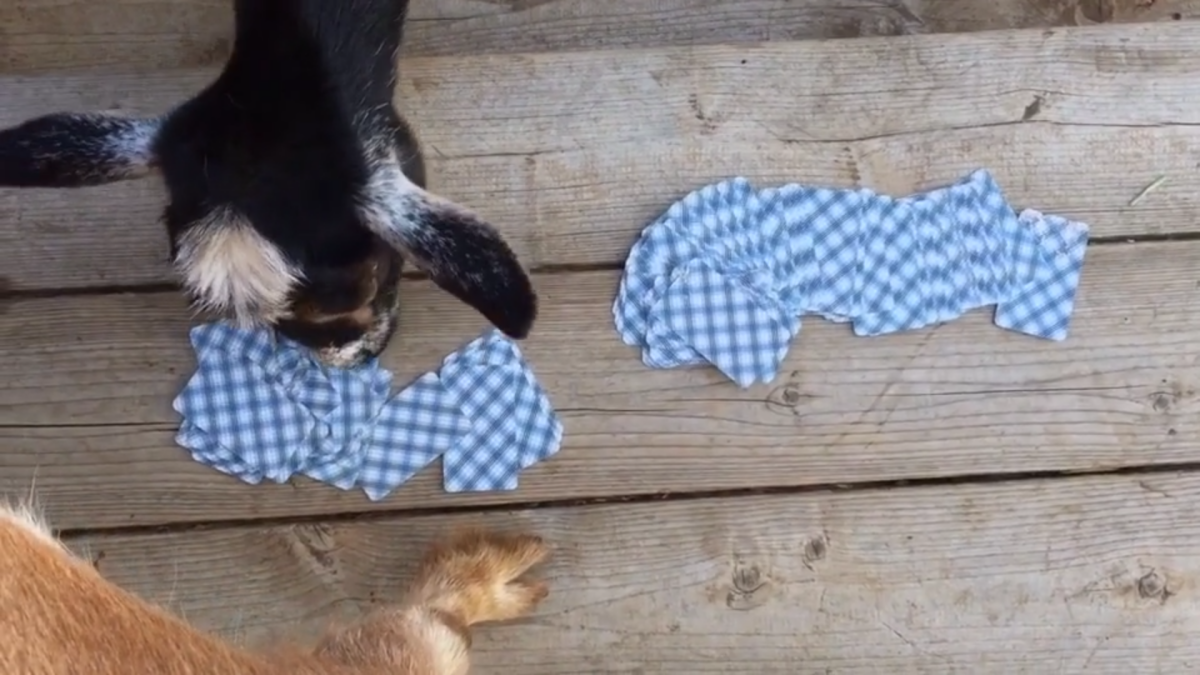 The idea is simple: Every day, Heather Champ spreads a stack of her Rider-Waite tarot cards on a table, and waits for one of her five Nigerian dwarf goats (or one of her 21 chickens) to pick a card. Then she sends the pick to her friend Tina Cordes, who reports back with her reading of the card. That’s it. It’s a goat picking a tarot card. It’s perfect.

Champ and her husband moved to Oregon nearly two years ago. “I built my first webpage in 1994 and I’ve been in love with life online ever since, but we kind of needed a break from San Francisco,” she says. Champ primarily works with online communities (she headed up that department at Flickr for several years) and has been a presence on the internet for decades (she was the original owner of Jezebel.com, before Gawker Media – sorry, now Gizmodo Media Group – purchased the URL from her).

As part of her move to the serenity of the country, she and her husband wound up with five goats and 21 hens. Three of the goats are triplets, and though they’re not used for any kind of commercial farming, Champ loves their weirdness and personalities. “They’re such interesting creatures, you know?” she says.

Champ began getting into tarot reading a few years ago. “I’ve just really enjoyed at the beginning of the day taking a moment of self-reflection through selecting a card,” she says. The goats came later, only inserting themselves into the tarot experience this past August. “One day I decided to take that little deck of cards out, and the chickens were totally not into it,” she says. “But Lily [one of her goats] kind of immediately started nosing through them and picked one.”

The Empress from heather on Vimeo.

Marigold selected the Empress for you today.

Tina says, “Get outside, watch the sun set, look at the night sky, be in nature. You’re feeling grounded and in touch with your intuition. Today, you can see what others can’t.”

If a goat shows interest in picking tarot cards, who are any of us to discourage them? Champ began filming the goats’ selections for her Instagram, but by early August had decided to set up a website. (Amazingly, GoatGuidance.com was not taken. There must be some goat owners out there who aren’t taking full advantage of their goats on the web.)

The goats aren’t trained in any way; it seems to be just part of their natural curiosity to pick up basically any object and see if it’s edible, provided they’re feeling hungry. That can sometimes have ill effects on the cards themselves; Champ says that “some of the cards are really taking a beating.” Her favorite reading came from her goat Juniper, who selected the Seven of Pentacles – and promptly ran off with it. Cordes, through her laughter, managed to convey this particular card’s reading. “The Seven of Pentacles is about taking time and being patient, and here I am chasing Juniper around the pen because I was afraid she was going to eat the card,” says Champ.

Happy Friday! Today’s selection by Juniper has been edited for length and swears. If you watch the video, you’ll see why.

Juniper’s pick for you: The Seven of Pentacles. Tina says, “Today is the time to be patient, there’s still work to be done… but mostly it’s time to wait.”

Champ plans to continue with the videos; the response has been glowing, with viewers finding her mystical goats oddly calming and soothing. And she’s even taken the time to make a Modern Farmer-centric new video, which we’re happy to exclusively present.

The Lovers from heather on Vimeo.

Lily picked the Lovers for our friends at Modern Farmer.

Popular
Is Agroforestry the Key to Hardier Row Crops?Shea Swenson
7 Smokable Plants You Can Grow That Aren’t MarijuanaBrian Barth
Where Has All the Mustard Gone?Chloe Faure
Why Don’t We Eat Turkey Eggs?Dan Nosowitz
The Fertilizer Shortage Will Persist in 2023Shea Swenson
Explore Modern Farmer
Related
Environment, Food Waste, Labor, Meat
Is There Such Thing as Good Meat?Emily Baron Cadloff
Environment, Food & Drink
Where Has All the Mustard Gone?Chloe Faure
Animals, Environment, Health
To Stop New Viruses Infecting Humans, We Must Protect Bat HabitatAlison Peel, Peggy Eby, Raina Plowright
Animals, Food & Drink, Lifestyle
The Great (Sticker Shock) ThanksgivingLindsay Campbell
wpDiscuz
We use cookies on our website to give you the most relevant experience by remembering your preferences and repeat visits. By clicking “Accept”, you consent to the use of ALL the cookies.
Cookie settings ACCEPT
Privacy & Cookies Policy