Dehydrator Guide: How to Preserve Your Fruits, Veggies, and More

Step-by-step instructions on how to dry food using only the power of the sun. 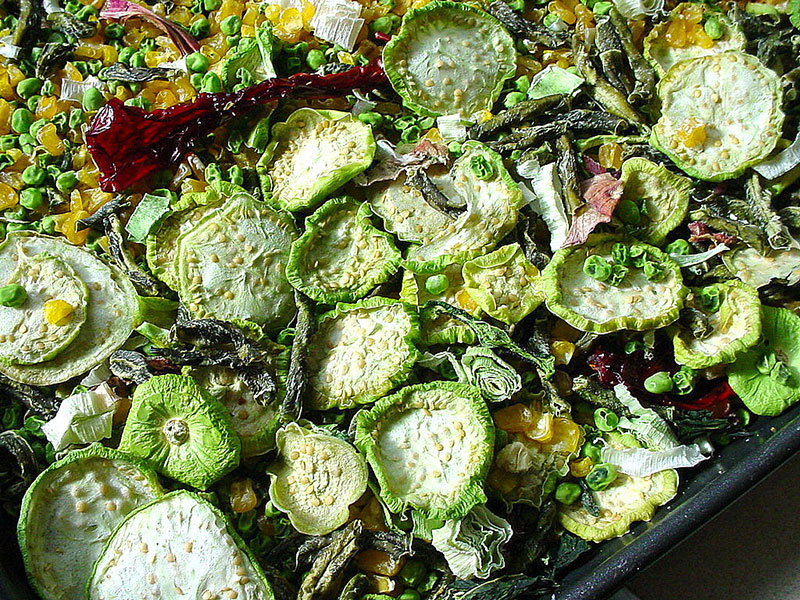 Efficient drying – removing moisture before food begins to decompose – requires a temperature of at least 86 degrees Fahrenheit and humidity below 60 percent. Though heat is critical, it’s best to keep the food out of direct sun, which degrades both nutrients and flavor. Indoor plug-in models create these conditions using an electric heating element and fan. Our solar dehydrator plans harness the heat of the sun and the laws of physics to do the work.

The polycarbonate glazing on the lid of the dehydrator acts as a greenhouse, trapping heat inside. The black-painted sheet metal on the underside of the lid absorbs the heat and radiates it onto the drying racks below, while shielding the food from the sun. Beneath the drying racks is a sheet of corrugated metal which funnels cool air away from the food and out the top of the dehydrator, taking moisture with it. Because the temperature outside the dehydrator is cooler than inside it, a convective current of air constantly moves over the food whenever the sun is shining, keeping the humidity low, even in sultry climates.

The following method works for fruits, vegetables, mushrooms, and herbs.

It probably goes without saying, but you need a flat sunny spot in which to set up your dehydrator. The longer the sun hits it each day the better, so position it where trees and buildings won’t cast a shadow. Ideally, locate the dehydrator on a deck, patio, driveway, or other hard surface that absorbs the heat of the sun during the day and retains a bit of warmth overnight. If that’s not an option, place it on bare earth or close cropped grass. You don’t want it sitting amid lush vegetation that becomes covered with dew at night, creating a moist environment around the dehydrator.

As shown in the diagram, prop the hinged side of the dehydrator up on cinderblocks or something that will help angle it toward the sun. Use a compass to ensure the glazed lid of the dehydrator faces due south for maximum solar gain. The height of standard cinder blocks creates a suitable angle for maximizing the solar gain during late summer in most climates. But the farther north you are, and the later in the season you’re using the dehydrator, raise the angle even more so the lid of the dehydrator is perpendicular to the rays of the midday sun.

If positioned properly, the temperature inside the dehydrator will easily be 30 degrees higher, or more, than the ambient air temperature, making it possible to dry food even in cool weather.

The quality of dehydrated food is only as good as the produce you start with, so don’t bother drying anything that is overripe, under-ripe, or otherwise unappealing in its fresh form. Before placing it in the dehydrator, prepare the produce as if you were going to eat it – wash off the dirt; remove bruised spots, pits, and seeds; cut off tops and other inedible portions; and peel anything you would want to eat peeled.

Then slice the food to a thickness between one-eighth and three-eighths of an inch, depending on your preference and what is most practical with each type of produce. The thinner the slices, the faster they will dry. Some fruits may be dried whole, such as blueberries, figs, and pitted cherries and apricots. Herbs should be plucked from the stem before drying.

Fruit and vegetables may be blanched for several minutes in boiling water or a steamer after slicing, which some sources say results in a superior product (brighter color, better flavor, quicker reconstitution, lower spoilage rate, etc). The idea’s that blanching halts enzymatic activity inside the food, thus keeping it fresher. Blanching is highly recommended for some types of food preservation, especially freezing, though most home and dehydrators consider it an optional step. At the very least, it’s wise to disinfect knives, cutting services, and containers with white vinegar as a basic sanitation measure before processing produce for dehydration, allowing them to air dry. If using non-organic store-bought produce, you may also wish to rinse your produce with a fruit and vegetable wash to remove pesticides and wax coatings.

Prepare the produce early in the morning so it can be placed immediately in the dehydrator to allow for a full day in the sun. Even on cloudy days the dehydrator will get hot enough to be effective, but avoid using it on rainy days.

Spread sliced food flat on the drying racks so that none of the pieces are touching. Place the racks in the dehydrator, close the lid, and check it every couple of hours. On a hot day, herbs may be dry within a couple hours – they’re ready as soon as they crumble when rubbed between the fingers. Thinly sliced fruits often dry in a half day, while thickly sliced fruit, and most vegetables, may take a full day or more to dry.

Remove the fruit once it takes on a pliable, leathery texture, but before it becomes hard. The fruit may be sticky to the touch when properly dried, but should not ooze liquid when squeezed. Because vegetables are lower in acidity than fruits, they need to be dried until they are hard and brittle in order to be fully preserved. They don’t need to be rock hard, but you should be able to snap them in two between your fingers (tomatoes, which are technically a fruit, are an exception).

If needed, leave the food in the dehydrator overnight to continue drying the following day. It will regain some of its moisture overnight, but a full day in the dehydrator should have dried it enough to prevent mold from forming – though if rain is forecast overnight, it’s best to bring the drying racks indoors as a precaution.

Remove the food as soon as it is sufficiently dried, let it cool for 10 or 15 minutes, and then immediately store it in glass jars or vacuum-sealed plastic bags, placed inside a pantry or other cool, dark location. As you remove the food from the racks, check to make sure all the slices are sufficiently dried and return any that are not to the dehydrator to continue the process. Scrub the racks with warm soapy water using a stiff brush to remove any bits of food, and dry them before using again. Reconstitute dehydrated vegetables by soaking them in warm water for an hour or two before consuming. Dehydrated fruit may be enjoyed as is.

Related
Lifestyle, Plants
The Prison Garden Empowering Women to Pursue GrowthLia Picard
Dairy, Food & Drink
Yes, the Government Really Does Stash Billions of Pounds of Cheese in...Emily Baron Cadloff
Future of Food, Plants
How More Than a Century of Antarctic Agriculture Is Helping Scientists Grow...Daniella McCahey
Lifestyle
These Farmers and Ranchers Turn Trash Into TreasureBridget Shirvell
wpDiscuz
We use cookies on our website to give you the most relevant experience by remembering your preferences and repeat visits. By clicking “Accept”, you consent to the use of ALL the cookies.
Cookie settings ACCEPT
Privacy & Cookies Policy