They've been gone for 40 years, and still making trouble. 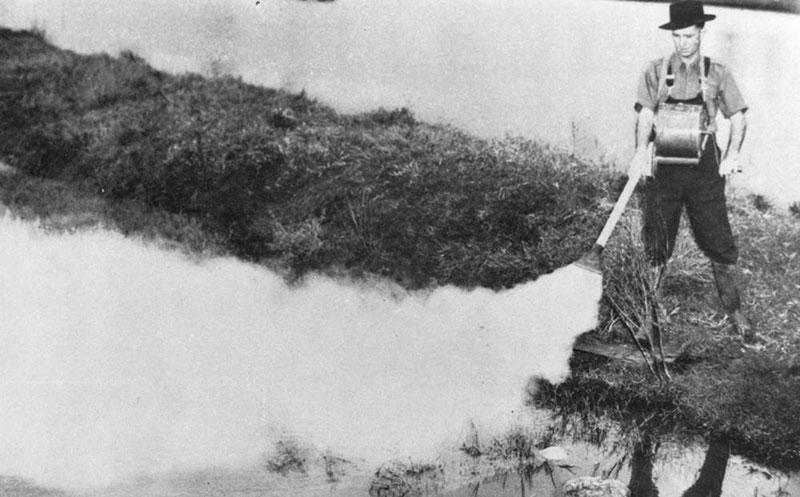 But a new study from Drexel University indicates that that might not be the case. Older readers may remember the infamous pesticide DDT, which was banned in 1972, ten years after the publication of Rachel Carson’s seminal book Silent Spring, which detailed the many ways in which DDT was ravaging the environment. (The pesticide might be most infamous for very nearly pushing the bald eagle to extinction.)

DDT is a member of a group of pesticides known as organochlorines, all of which were banned at that same time. In the same general family are polychlorinated biphenyls, usually abbreviated to PCBs, which throughout the 20th century were produced as a byproduct of various manufactured goods and, frequently, dumped directly into such important waterways as the Great Lakes and the Hudson River.

The study is fairly simple, though it uses data that hasn’t been put together in quite this way before. Some children born in the past few decades were given blood tests in their second trimester, and those blood tests will show the presence of these chemicals in the fetus. Comparing that data with autism spectrum diagnoses (and a control group from the general population) yields the results.

In case you’re wondering, organochlorines are widely known to have not really decomposed in the past 40 years; they seeped into groundwater, were absorbed by plants, and can sometimes be found in the fats of livestock that we eat today.

Nobody is saying these pesticides cause autism; only that a higher level of them has a correlation with higher rates of autism.

The caveats for this study are important. For one thing, this is absolutely a correlation; nobody is saying these pesticides cause autism or intellectual disability, only that a higher level of them has a correlation with higher rates. And the sample size is small, relying on less than 1,500 cases, all from Southern California, and all of whom had enrolled in a specific program that administered those blood tests. Even further, the study adjusted for some variables – gender, time of birth, maternal age and ethnic identification – but not others, like socioeconomic status, location, or family medical history.

That said, of course, the study indicates – not proves, but indicates – just how damaging pesticides and toxic byproducts might be in the environment and in generations still to come. Even if they’ve been banned for almost half a century.

Correction: An earlier version of this article contained errors about the precise connection between certain chemicals and their specific correlations. We apologize for this mistake.

Popular
Is Agroforestry the Key to Hardier Row Crops?Shea Swenson
7 Smokable Plants You Can Grow That Aren’t MarijuanaBrian Barth
Why Don’t We Eat Turkey Eggs?Dan Nosowitz
Where Has All the Mustard Gone?Chloe Faure
Goat Sex: Everything You Wanted to Know But Were Afraid to AskAndrew Amelinckx
Explore Modern Farmer
Related
Environment, Food Waste, Labor, Meat
Is There Such Thing as Good Meat?Emily Baron Cadloff
Environment, Food & Drink
Where Has All the Mustard Gone?Chloe Faure
Animals, Environment, Health
To Stop New Viruses Infecting Humans, We Must Protect Bat HabitatAlison Peel, Peggy Eby, Raina Plowright
Animals, Food & Drink, Lifestyle
The Great (Sticker Shock) ThanksgivingLindsay Campbell
wpDiscuz
We use cookies on our website to give you the most relevant experience by remembering your preferences and repeat visits. By clicking “Accept”, you consent to the use of ALL the cookies.
Cookie settings ACCEPT
Privacy & Cookies Policy