Chef Hugh Acheson is on a Mission to Save Home Economics

The restaurateur and cookbook author has hatched a plan to change the way schools teach life skills to kids. 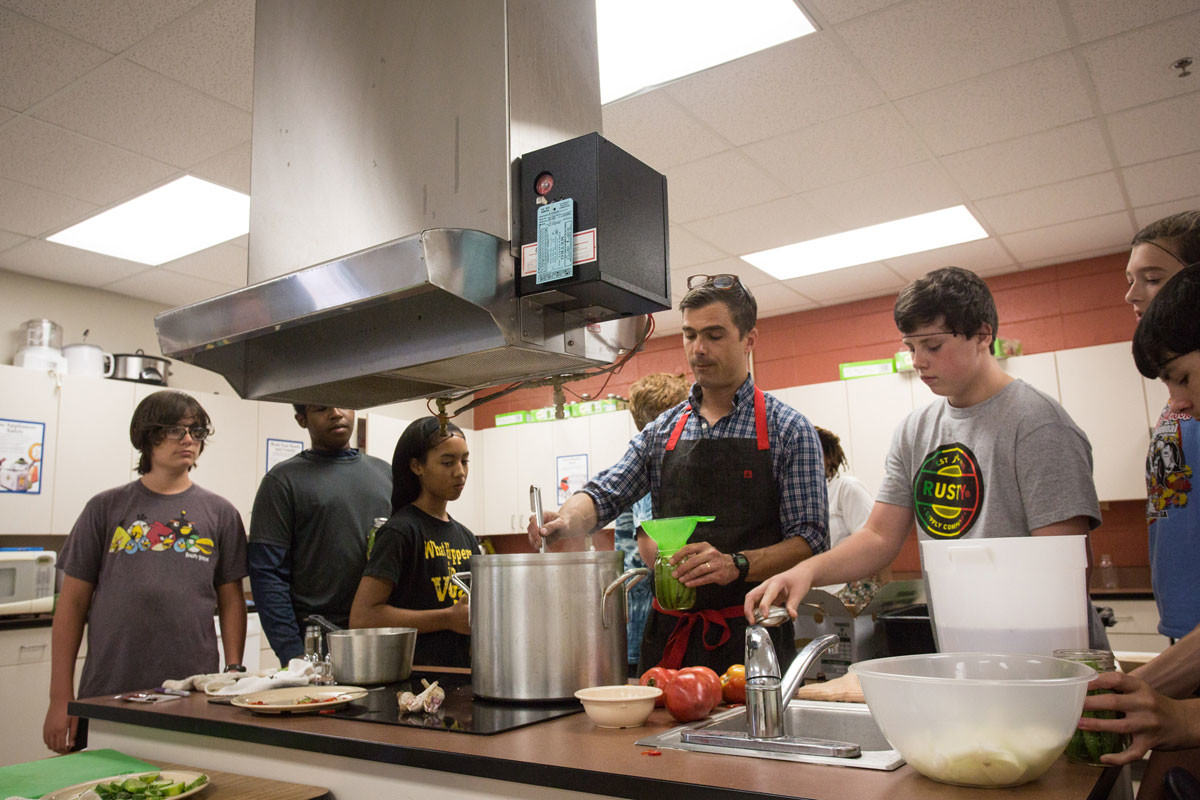 She hopes the question will prompt students to think about food waste at home and how to make the most of their food dollar, as well as how to problem solve like a business owner.

“There’s a thing in America where we’re not taught to be good, smart consumers,” Tulloss tells Modern Farmer. With the help of a highly-regarded chef, she plans to change that trend across the country. And she’s starting with a handful of classrooms in Athens, Ga.

Tulloss is the director of Seed Life Skills, a new charity founded and led by chef Hugh Acheson, of Top Chef fame. It seeks to redirect the dwindling relevance of home economics education in public schools. In the race to make kids career-ready in Science, Technology, Engineering and Mathematics (STEM) fields, home ec advocates argue that teaching students to cook and care for themselves has been left behind.

While many have bemoaned the disappearance of home economics in schools, the class itself was never cut, only rebranded as Family and Consumer Science in 1994. With that distinction made, the difference between home economics taught to students in the 1950s and what they’re taught today is clear: Rather than learning to bake from scratch, understand food safety, and balance family finances, students instead read Betty Crocker boxes, Acheson says.

For many students passing through Allen’s class, it’s their only chance to learn to cook.

When the chef heard his oldest daughter wasn’t learning to bake by mixing butter, eggs, and flour herself, Acheson called the school superintendent to complain. According to Acheson, the superintendent – Philip Lanoue, the 2015 National Superintendent of the Year – agreed that home ec needed work. He’d considered cutting it. Instead, he told the chef: “Why don’t you fix it?”

Acheson – who owns four restaurants and a coffee shop, writes cookbooks, and travels regularly as a food personality – didn’t need another job, he jokes. But he saw an opportunity to use his expertise and celebrity to bolster an atrophying school course – and impact poverty and obesity in his community at the same time.

The Seed Life Skills charity launched in early 2015, and its endgame is to craft a new curriculum centered on basic cooking chops, real-world financial intelligence, and fix-it-yourself skills. Students will leave class knowing how to roast a chicken, read a cell phone contract, understand health insurance forms, and mend clothes. The mission: “Empowering youth to be sustainable stewards of food and financial resources.” 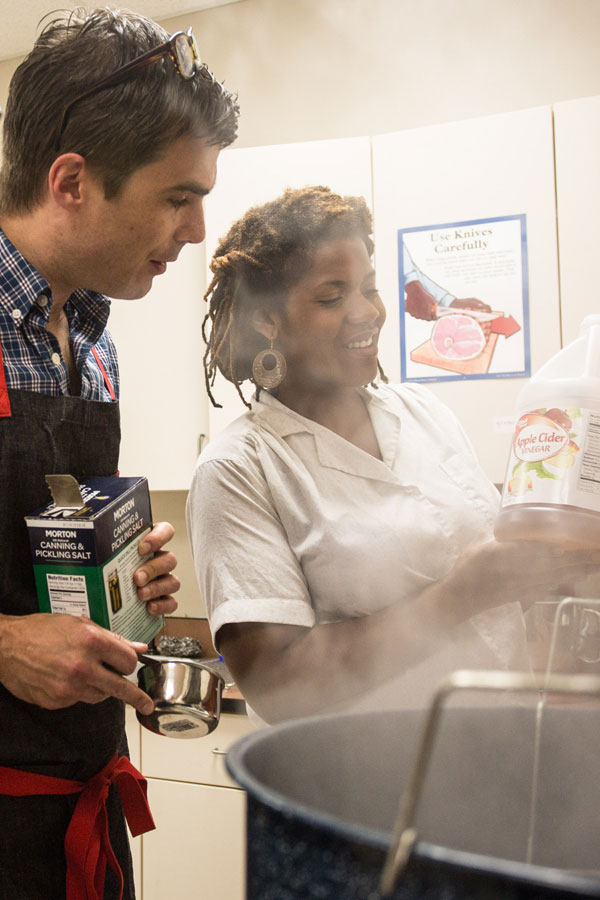 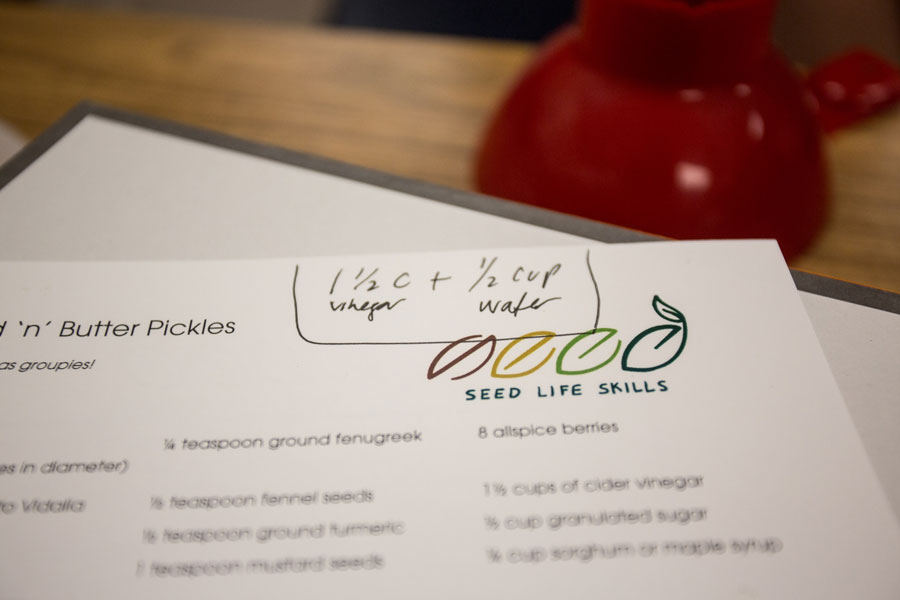 A recipe for bread and butter pickles during a Seed Life Skills workshop at Clarke Middle School in Athens, Ga., on July 6, 2015. Rinne Allen

This goal includes producing a set of lessons and teaching tools offered free to schools and applicable in urban, suburban, and rural classrooms. “I need a curriculum that will thrive in Northwest Idaho,” Acheson says, meaning that college towns and cow towns alike need to refocus on teaching life skills.

With fiscal sponsorship from the Captain Planet Foundation, and a list of corporate partners that includes Google, Acheson’s effort to remake home ec has gained quick momentum. Next fall, Seed Life Skills’ curriculum rolls out at middle schools in Acheson’s homebase of Athens. A tentative date to scale nationally is 18 months away. 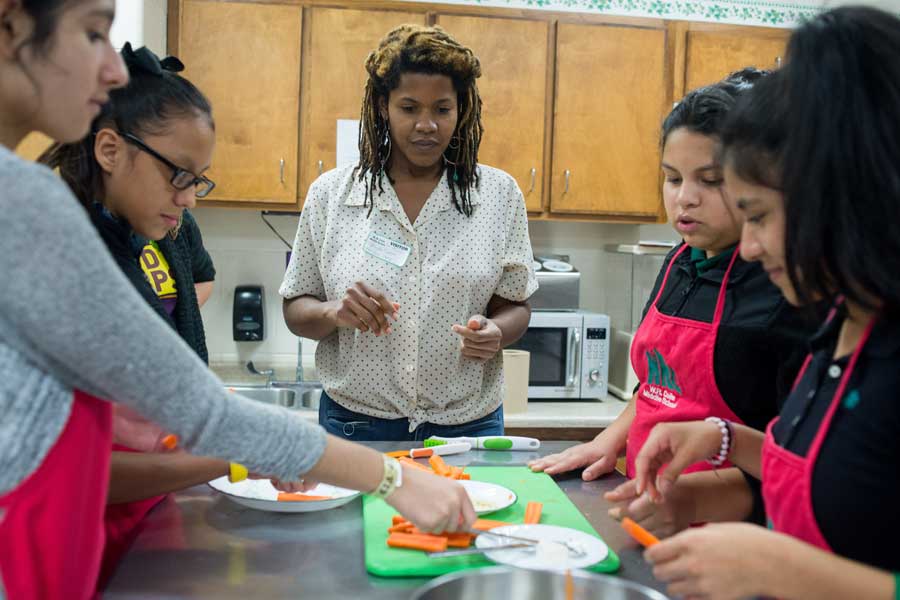 Before all that, Seed Life Skills is calibrating itself at the local level. Tulloss, who met Acheson not long after finishing a master’s degree in Family and Consumer Science, has been partnering with the school garden-loving Food Corps crew to connect with home ec teachers and students in Athens. Which is why Tulloss came to talk carrot tops at Coile Middle School, a school placed at Athens’ rural edge and serving a low-income, mostly minority population.

“We can make new things with them,” one student answers Tulloss’ question.

Just one eighth grader raises a hand. The meager response is unsurprising to her teacher, Gini Allen, a career Family and Consumer Science educator. Most students’ culinary literacy is pretty low, Allen explains. Some students don’t have working kitchens at home, she adds, and some live off fast food; Red Lobster is the nicest restaurant they know. The food choices they’re forced to make now, she worries, will affect their health for life.

For many students passing through Allen’s class, it’s their only chance to learn to cook. And if more young people learned to cook and feed a family, the pro-home economics argument goes, the better our society can battle obesity. But with one teacher assigned to 15 or more students at a time, getting through to students proves difficult. Allen sighs with joy at the idea of what Seed Life Skills can offer teachers and students.

“I just want my kids to know that there’s something bigger than the small world they’ve been exposed to,” Allen says. 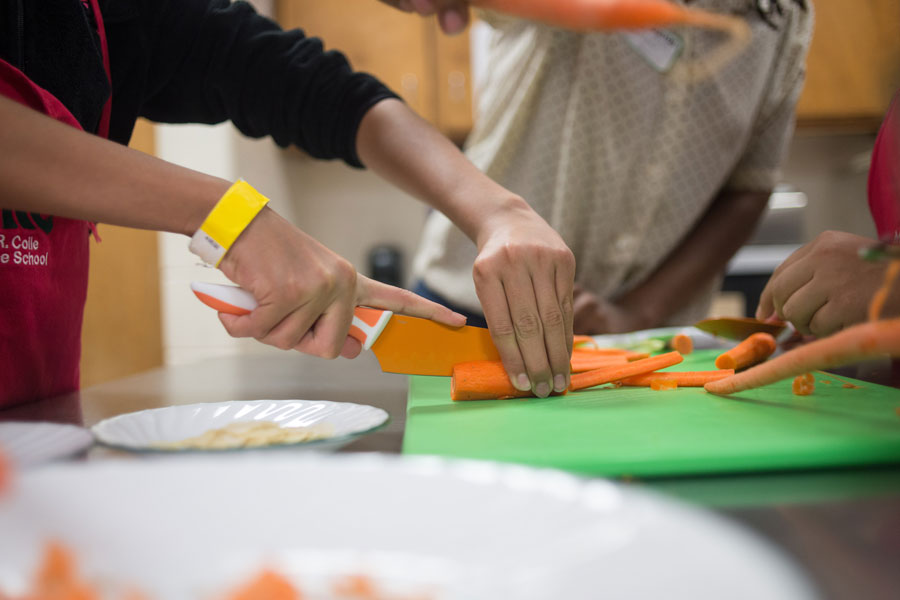 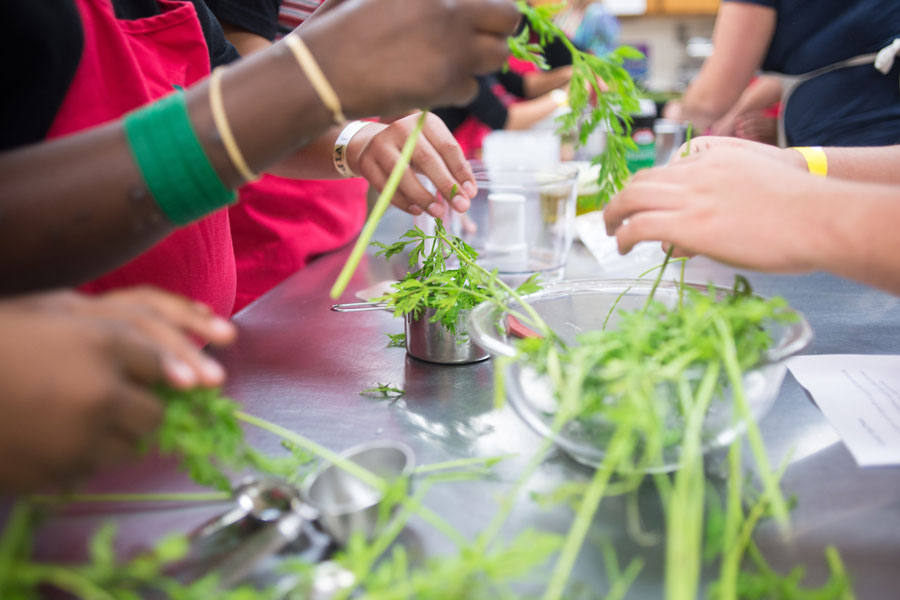 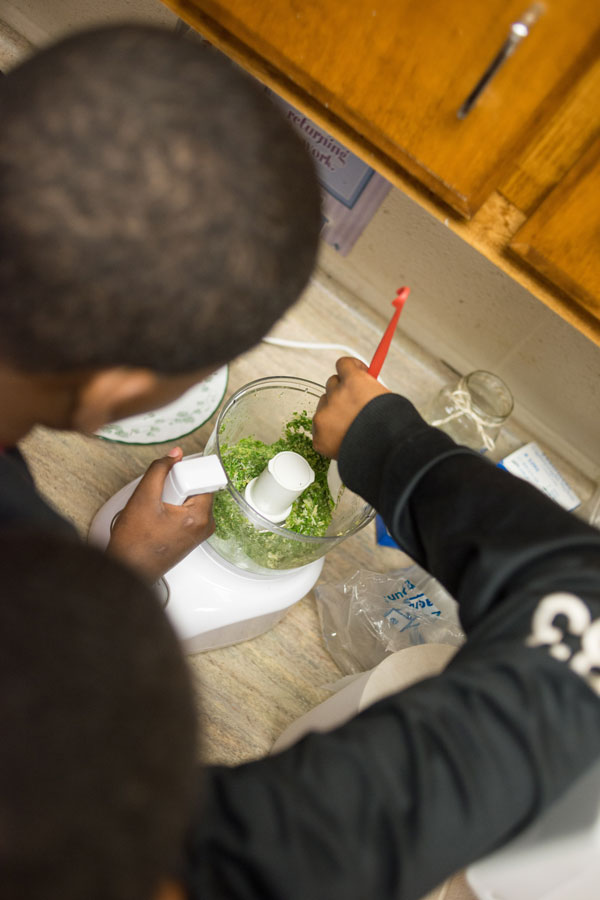 Teachers like Allen do a lot with very little, and main goal of Seed Life Skills is to support educators, Tulloss says. Strained school budgets and a FCS teacher shortage stifle school district efforts to offer life skills curriculum, she says, so Acheson’s organizaiton is not only thinking about lesson plans, but also ways to bolster already gifted teachers.

“The work (Family and Consumer Science teachers) do is critical. I think the main thing we do is advocate for them and celebrate and support what’s being done,” Tulloss says.

A spokesperson for the American Association for Family and Consumer Sciences (AAFCS) heralds Seed Life Skill’s collaborative approach to home ec. “We appreciate their support…and desire to raise the visibility of the field,” says AAFCS director of communications Gwynn Mason in an email.

Unfortunately, the reality in schools across the country, Acheson says, is that not all educators are created, or funded, equally. So writing a curriculum that functions in any home ec classroom, no matter how busted the stand mixer has become, becomes doubly important.

“I have to come up with a ready-to-ship box of curriculum that shows up in Iowa and they can say, ‘Yeah, I can do this,'” Acheson says.

The particulars of that curriculum are still being sussed out by Tulloss, but it’s not being designed in a vacuum. Tulloss is currently organizing a conference of educators, administrators, chefs, and scientists for early 2016. During this charette, necessary elements of the final curriculum will emerge, she says. 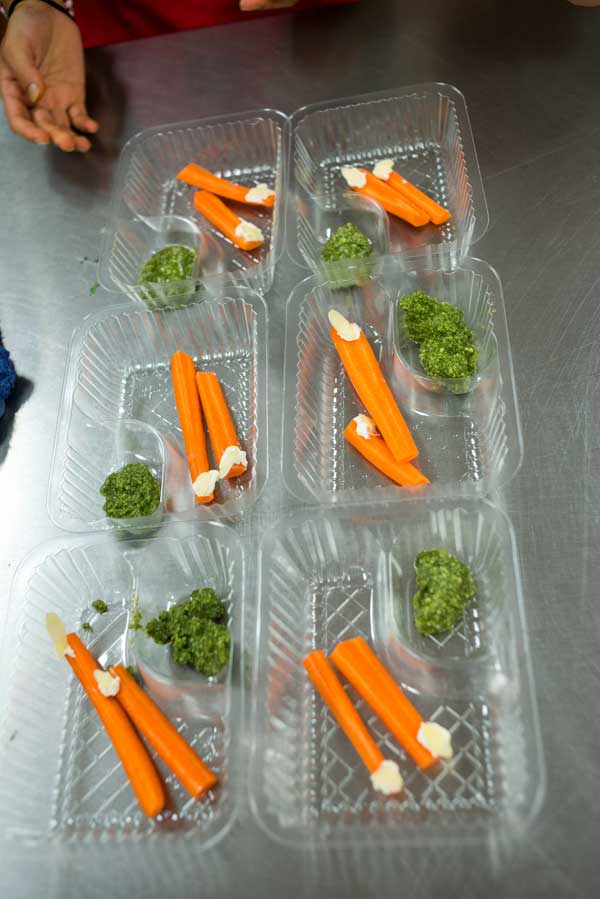 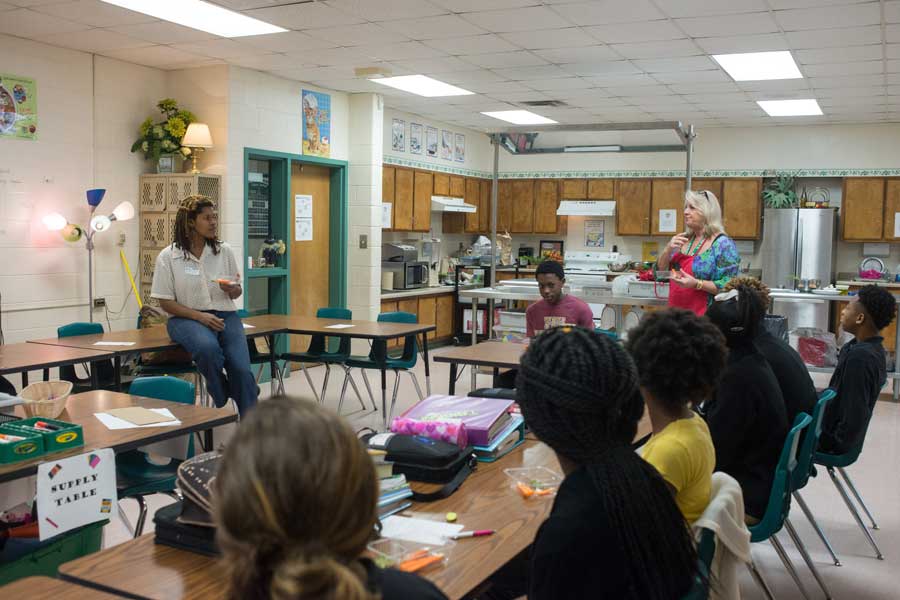 Thanks to Google, a main Seed Life Skills element is already in motion. Working with the Internet giant’s YouTube reach, and coupled with Acheson’s high-profile chef friends, the charity will produce a video series in the next year featuring the likes of Jacques Pepin or Dan Barber teaching students basic culinary skills .

“I don’t think anyone will forget Jacques Pepin teaching them how to poach an egg,” Acheson says.

Acheson said this isn’t about organic food or farmers markets or a chef telling people what to eat; it’s about feeding people.

Both Acheson and Tulloss are quick to address early criticisms lobbed at them from educators. Foremost among them: a fine dining chef doesn’t understand the economic and nutritional reality of low-income students; his expectations are not based in reality, Tulloss recalls hearing.

Acheson said this isn’t about organic food or farmers markets or a chef telling people what to eat; it’s about feeding people. “The real thing I’m looking for is to teach people to cook, to feed themselves so they go about their day with a clear head,” Acheson says.

For now, Seed Life Skills is starting with carrot tops. Tulloss, Allen, and the Food Corps staff watch students as they measure out carrot greenery, salt, garlic, and parmesan cheese, toss it all in a food processor, and safely blend the ingredients into pesto. Another group of students slices carrots into spears while holding knife handles firmly in the palm of their hands.

Cooking skills they learn in home ec, Tulloss hopes, will stay with them for life. In the near term, the pesto is delicious.