Slime Fight: How to Manage Slugs and Snails

First, a bit of anatomy. Slugs are essentially snails without the shells. Different species trouble farmers and gardeners in different parts of the country, but they are all closely related and, from a pest control perspective, are dealt with using the same methods. They have a single, slimy foot that leaves a signature trail, letting […] 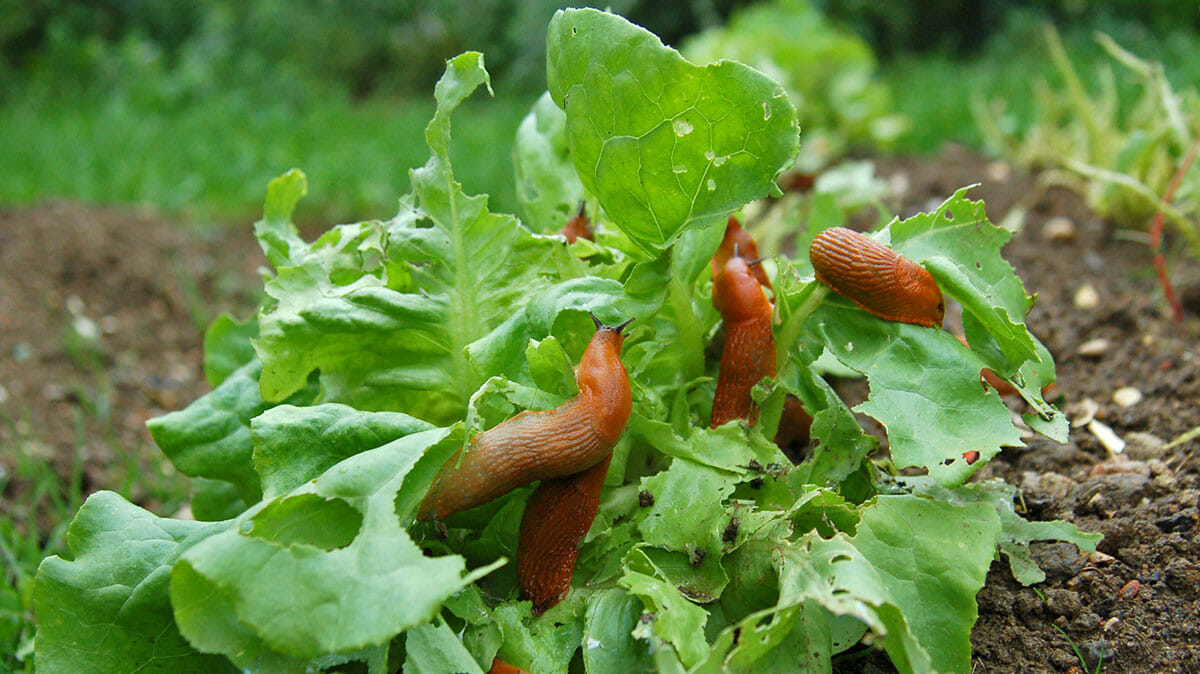 First, a bit of anatomy. Slugs are essentially snails without the shells. Different species trouble farmers and gardeners in different parts of the country, but they are all closely related and, from a pest control perspective, are dealt with using the same methods. They have a single, slimy foot that leaves a signature trail, letting you know that molluscs have been chewing on your plants, rather than beetles or some other pest. Other than that, the main body part of concern to gardeners is the radula, what has been called ‘a tongue of a thousand tiny teeth’ – that’s the part that shreds up your plants.

Snails and slugs are cousins of shellfish and require a semi-moist environment at all times to survive. They are most active in spring when the weather is cool and wet and plants are tender. Completely nocturnal, they hide out in crevices in the soil or in moist, shady places aboveground during the day, and inch out to feed on nearby vegetation at night. Controlling slug and snail damage in the garden starts with reducing their preferred habitat.

Slugs and snails are slow-moving creatures and never travel far from their daytime hideouts to their night time feasting grounds. Loose mulch, sticks, thick vegetation and clumps of dead plant matter are typical slug and snail habitat, so maintaining a buffer of dry, bare soil around the most susceptible plants – like lettuce seedlings and strawberries – is one sure-fire tactic to help eliminate them. Â­

If you want to mulch your garden paths and beds, it’s best to wait until early summer when slug and snail activity has died down and seedlings have grown big enough to withstand being munched on. Water the garden only where it is truly needed – right at the base of the plants with a soaker tube or drip irrigation, for example – to reduce the overall moisture level. If you must water with a sprinkler, do it in the morning so the terrain dries out before the slimy ones become active again at night.

Also, avoid storing overturned pots, wooden boards or pieces of lumber near the garden, as these easily become slug and snail condos. On the other hand, some gardeners intentionally create prime slug and snail real estate, so they will all congregate in one place during the day and can easily be rounded up and disposed of (drowning in soapy water works well).

Besides catching individual slugs and snails and drowning them, there are several other strategies to consider if their population gets out of hand.

Top of the list is beer traps. Snails and slugs are attracted to yeast – and yeast in the form of beer will drown them when they slither into it. There are a few ways to make a slug pub, but the basic version is nothing more than a shallow plastic container filled with an inch or so of beer. And don’t think that slugs aren’t particular about their beer – a 1987 study at the University of Colorado determined that Kingsbury Malt Beverage was most effective.

There are numerous snail- and slug-killing products on the market, the most benign of which is diatomaceous earth, a natural product comprised of the shard-like fossils of ancient microorganisms that shreds and desiccates their soft, mucilaginous bodies as they move across it. It is applied in a band on the ground around susceptible plants so the slugs and snails have no choice but to cross it as they come to feed.

Metaldehyde-based poisons are the chemical approach to slug and snail control, though they can also harm pets, people and wildlife. Iron phosphate-based slug and snail baits, such as Sluggo, are equally effective and are billed as an environmentally friendly alternative. These are approved for use in organic agriculture, though some purists reject their claim as a harmless all-natural product.

In between good garden hygiene and all out warfare, there are loads of other slug and snail management strategies, some of which are biologically based and others that are more sinister.

Most 8-year-old boys can tell you the best way to kill a slug is to pour salt on it and watch it melt. Unfortunately, salt also prevents plants from growing, so that method is not advised in the garden.

Another oddly morbid aspect of slug and snail biology is that their mucus generates an electrical current when it comes into contact with copper. Thus, gardeners surround their vegetable beds with thin strips of the metal as an electrocution barrier. Copper tape, as it is called, is most effective at protecting raised wooden beds, potted plants, nursery tables or any planting where there is solid object to attach it to.

As for biological methods, snails are a favorite food of chickens, while ducks are known to relish slugs. Allowing them, with careful supervision, to roam in the garden just before dawn when the slugs and snails are still out is one of the most time-honored methods of control.

For that matter, many birds, reptiles and amphibians also dine on snails, so taking steps to attract them (a small frog pond in the garden, for example) is a way to encourage those natural predator-prey relationships. Releasing predatory snails is an option to control the herbivorous snails that decimate gardens and there are even parasitic nematodes (microscopic worms) that prey on slugs, but unfortunately they are not yet registered for use in North America, only in Europe.

If You Can’t Beat Them, Eat Them

All types of garden snails are edible by humans, as are slugs (though there is not much of a culinary tradition associated with the latter). The French actually raise snails in their gardens for culinary purposes. They keep them in tiny cages in a shady corner and fatten them on scraps of lettuce and herbs like they’re rabbits.

If you want to turn your slug or snail problem into a food source, however, there are a few things to know. They taste much better if fed human food for a few days prior to consumption – any type of vegetable or grain will do. This also cleans out any toxic plant matter they may have been feeding on, such as poisonous mushrooms, and ensures they don’t pass the poison on to you. Not that you would consider eating them raw, but thorough cooking is important because snails harbor dangerous parasites, including one that will make your brain swell to a fatal proportion.

After they’ve gorged on grains and vegetables for a few days, give them a short bath in boiling water to dissolve some of the slime and, in the case of snails, to coax them from their shells. Sautéed for about 10 minutes in a skillet with olive oil, diced garlic and oregano, slugs and snails are as tender and tasty as chicken.