How to Chicken-Proof Your Garden - Modern Farmer
Animals, How-To, Plants

How to Chicken-Proof Your Garden

You wouldn't have babies and not prepare your house for them. Same goes for chickens in your garden. 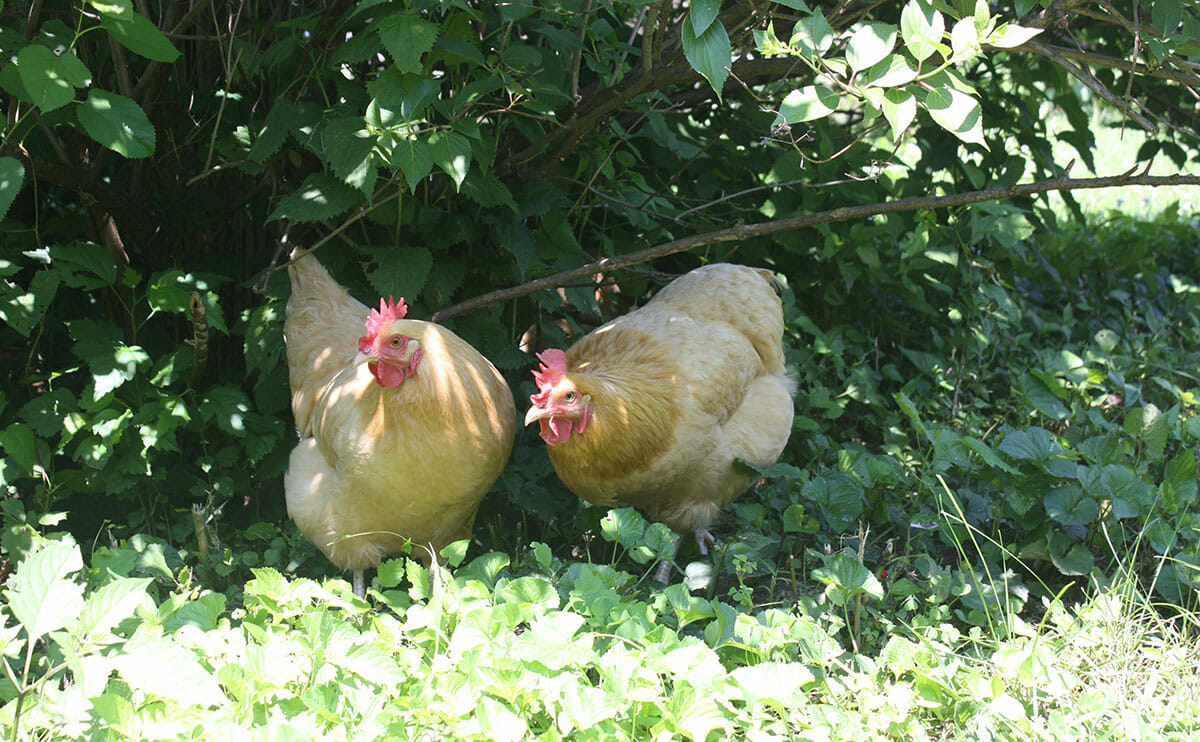 Jessi Bloom, a landscape designer in the Seattle area and the author of the book Free-Range Chicken Gardens, says a happy coexistence is all about preparing your garden. “You wouldn’t have babies and not prepare your house for them,” she says.

The first consideration is the number of chickens appropriate for the space. “People have way too many chickens for the amount of space they have,” Bloom says. She recommends that smaller urban yards host no more than three to five chickens, and bigger suburban lots no more than five to eight.

“If you have 30 chickens on a quarter acre lot they should not be let out,” Bloom says, “They’re going to destroy it.”

Linette, an outlaw chicken owner in Philadelphia, introduced six chickens to her back yard last year. Her lot is big enough, at four-tenths of an acre, so her chickens have plenty of space and are easily discouraged from the plants Linette wants to protect. Even so, Linette keeps her vegetable garden fenced off with chicken wire during the growing season. 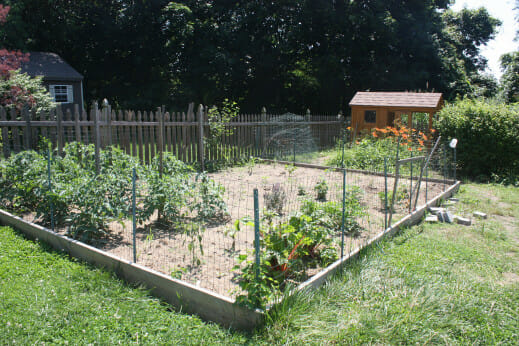 If a fence around the more vulnerable plants is not practical, there are a few easy fixes.

1. Chicken wire is your friend

A simple collar of chicken wire around a small plant will discourage chickens if they have enough to eat. 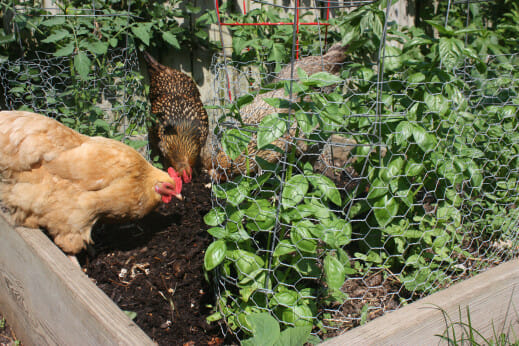 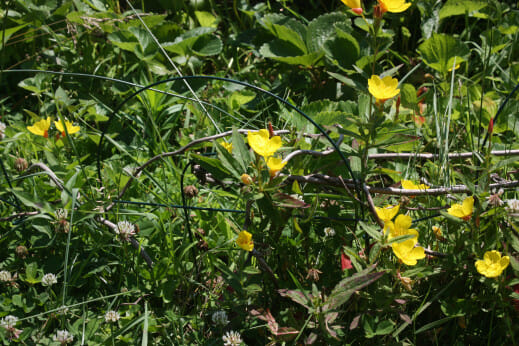 This wouldn’t phase a determined chicken, but because her chickens have so much space and so many other plants to eat, they didn’t cross the fence.

Sturdier than chicken wire, this wire mesh can be used to protect newly planted seeds. 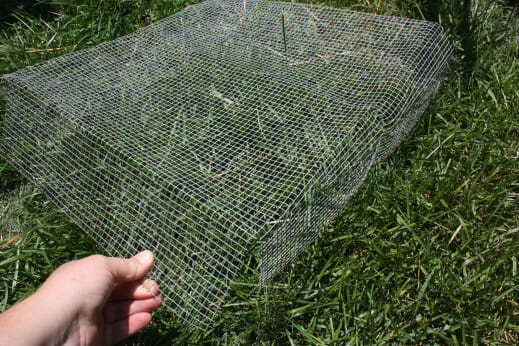 Cut out a large square, and cut a small square at each corner. This gives you long tabs on each edge of the larger square which can be bent down so it stands up off the ground. It can be weighed down with bricks and used to protect newly-planted seeds or low-growing plants like ground covers

3. Get serious with bricks and stones

An aggressive chicken can scratch smaller stones out of the way, but a ring of bricks or larger stones around the base of a plant can discourage scratching. 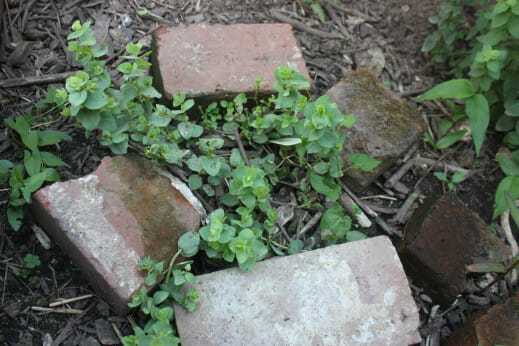 This method is especially important in newly planted containers, because the chickens love nothing better than to kick the loose soil out of a pot. 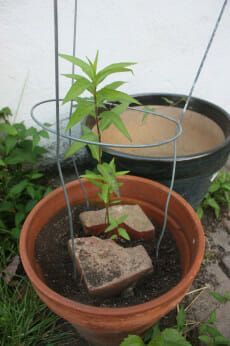 4. Get weeds to do the work

Yes, even weeds can help protect your plants. 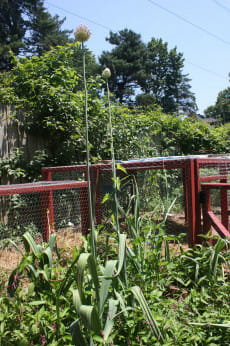 When you pull out weeds, you make patches of bare dirt that draw chickens like a magnet. Once they’ve stripped out worms and bugs, they lie in the dirt and pack it down to make dust baths. Even a sturdy plant like garlic will not take well to this treatment, but simply leaving the weeds in the bed discourages the chickens and doesn’t hurt the garlic.

Bloom suggested planting flower seeds in tiny crevices the chickens can’t get to, like these nasturtiums planted in the spaces between the bricks that line a chicken run. 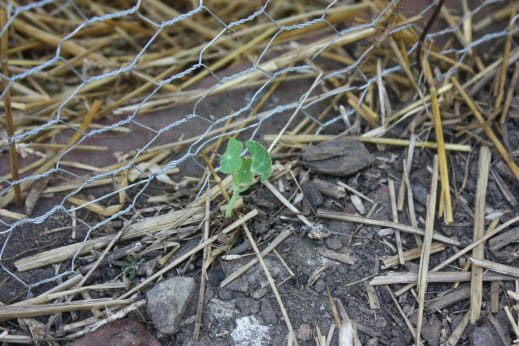 The chickens couldn’t scratch or peck the seeds, so the plants had a chance to germinate. Once the seeds sprouted they tasted the leaves a few times but have otherwise left them alone, preferring easier pickings in other parts of the yard.

6. Plants just for the chickens

Bushes and low-growing trees can provide shelter for chickens to escape from predators. 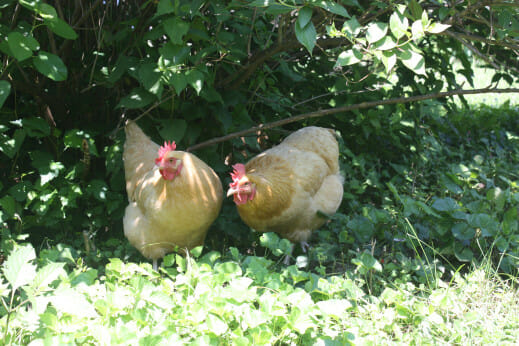 Linette’s yard is arranged so there’s always a bush nearby for a foraging chicken to dart under if danger threatens. On hot days, they spend a lot of time scratching and dozing in the deep shade under the bushes. It helps to plant at least one evergreen so the chickens have cover even in the winter. Bloom also grows a variety of berries in her yard to feed her chickens, and growing some of their food cuts down on the need for expensive store-bought chicken feed. She’s wary about recommending specific plant varieties because some are invasive in one region but perfectly fine in others. However, she likes elderberry because it provides both food and shelter to her chickens. Blueberries are also good chicken food, but you’ll want to protect some of the bushes or no blueberries will make it into your kitchen. 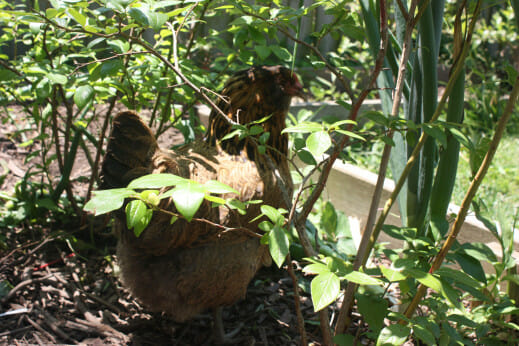 Gardening with chickens can is a constantly evolving process. No system is perfect, but a few inexpensive strategies can make the experience easier on the gardener and the garden.

Bricks are indeed a life saver. I found 12″x20′ sort of cute wire fencing at Lowe’s and it is a game changer. We have a rather large bed in front of the coop and run, it’s at least the length of both, so 32′ by 10’ish. Anyway, we garden with lots of bags of decomposed leaves and pine needles which of course the ladies LOVE. Having that fence around the bed keeps everything together and in place. The new shrubs and plants we still brick. We’re all happy.

Great idea! thanks for helpful guide to have chicken in the garden. Garden is one of great places to have lessons for my kids.