How to Incubate Chicken Eggs

Mothering chicken eggs is not for everyone, but if you think it might be your calling, here's how to do it. 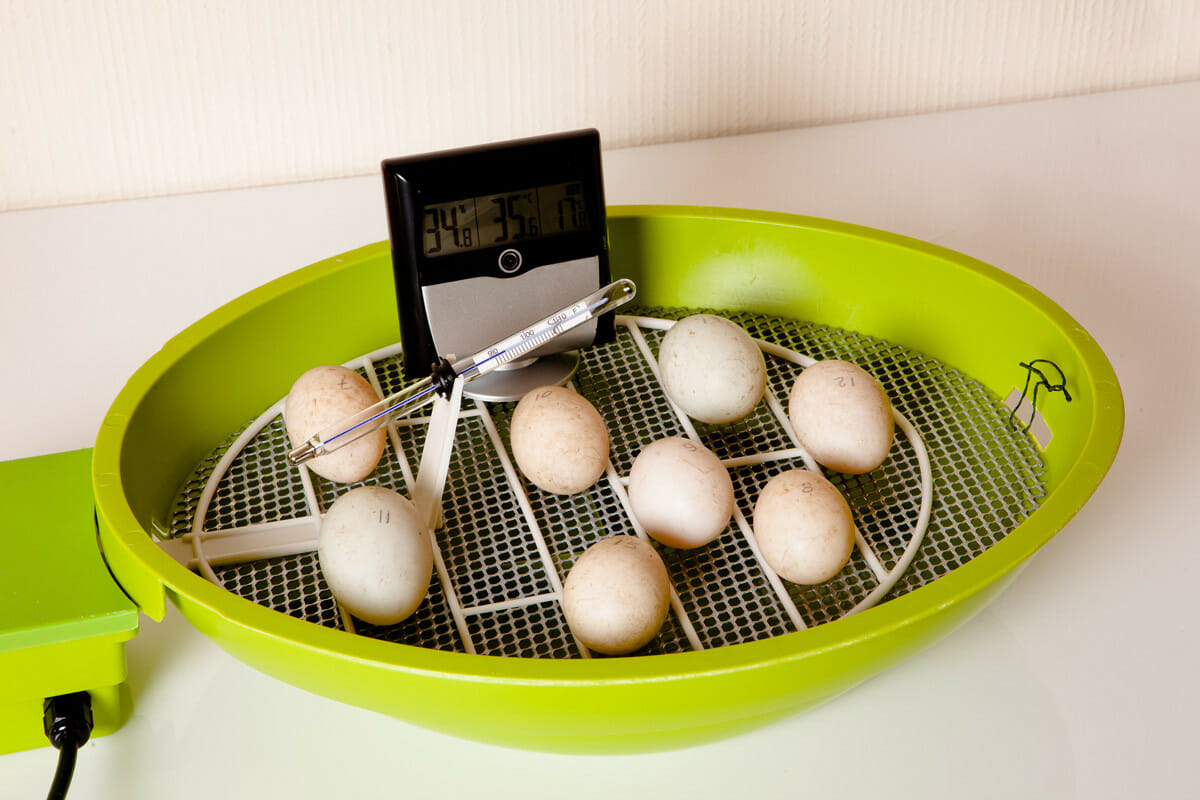 Once a hen lays a clutch of eggs, instincts take over. They constantly fuss over them, adjusting them just so throughout the day and rarely leaving the nest for more than a few minutes. Motherhood is a big responsibility for a young hen – if she’s the least bit neglectful, her babies will never hatch. Or worse, they may hatch with deformities.

Modern chickens, it turns out, are not always very effective mothers. Whether it’s genetic or culture, who knows, but they get distracted, other hens oust them from their nest, the rooster comes by… there’s no shortage of things that can go wrong. For this reason, most farmers and backyard chicken enthusiasts don’t trust incubation to their hens, they take it upon themselves to do the brood work instead. You can also buy day-old chicks and skip the incubation process, but it costs more. Plus, why would you want to miss out on an opportunity to experience one of life’s miracles?

Step 1 – Set Up an Incubator

Depending on how many eggs they accommodate and how automated they are, Incubators run from around $50 for the homesteader favorite ‘Hova-Bator’ into the thousands of dollars for commercial scale incubators. With top-of-the-line incubators, you put in an egg, close the door and out pops the chick three weeks later. You can also go the DIY route, which saves money, but is almost as much work as sitting on the eggs yourself. No matter how fancy or jerry-rigged, all incubators must accomplish a few basic things:

Temperature: The eggs need to be kept at 99.5 degrees at all times; just one degree higher or lower for a few hours can terminate the embryo.

Ventilation: Egg shells are porous, allowing oxygen to enter and carbon dioxide to exit; incubators need to have holes or vents that allow fresh air to circulate so the fetuses can breathe.

Homemade versions usually involve some sort of insulated box – a cheap Styrofoam cooler will do. An adjustable heating pad or a light bulb on a dimmer switch will suffice for the heat source and a pan of water with a sponge in it will make the air humid. Low-end commercial incubators don’t amount to much more than this, but the more you pay, the more automated the temperature and humidity controls will be.

A high-quality thermometer and hygrometer (a device to measure humidity) are the most important tools of incubation; cheap models are usually not accurate enough. If you’re not working with an incubator that has these instruments built in, opt for a combo thermometer/hygrometer with an external display. These have a sensor that goes inside the incubator with an LED screen on the outside that shows the temperature and humidity readings without having to open the incubator and ruin your carefully calibrated environment.

One time-saving feature is a device to rotate the eggs automatically. Much of the fussing that a hen does over her eggs comes from an evolutionary instinct to constantly move them about. The finely tuned ecosystem inside a chicken egg is kept in balance by constantly changing the position of the egg. High-end incubators have a built-in egg turning device, but there are also standalone egg turners that can be placed inside a homemade incubator to do the job. Or, you can rotate manually according to the instructions below.

The incubator should be placed in a location with the least possible fluctuation in temperature and humidity throughout the day – a basement is ideal, a sunny window is not.

If you already have a flock of chickens that includes a rooster, the majority of the eggs they lay will be fertile. Collect them as soon as possible after laying and transfer to the incubator. If you don’t already have chickens, find a friend or a nearby farmer who does and ask if you can buy some fertile eggs. Websites like Craigslist and BackyardChickens.com are a good way to link with people that may have eggs to spare. Some feed stores sell fertile eggs in the spring and there are many suppliers that sell eggs online.

The closer to home, the better the egg source. The jostling about and fluctuations in temperature and humidity that occur during transport are hard on the developing fetus. Hatching rates on eggs straight from the coop are often in the 75 to 90 percent range; with mail-order eggs, there is no guarantee that any will hatch.

When picking eggs to incubate, use those that are clean, well-formed and full-size. Above all, do not clean the eggs – there is a naturally occurring coating that is vital to the success of the embryo. Wash your hands before handling and be as gentle as possible, as the embryos are extremely susceptible to damage from sudden movements.

Ideally, the eggs are transferred directly to the incubator, but it’s possible to store them in egg cartons if needed. Kept at temperatures between 50 and 60 degrees and 75 percent humidity, the development of the eggs can be delayed for up to ten days without sacrificing the viability of the embryos. However, they must be stored with the fat side of the egg pointed up to keep the embryo alive.

It takes 21 days on average for an egg to hatch once incubation begins. Before placing the eggs inside, turn on the heat source and measure the temperature and humidity over a 24-hour period, making adjustments as necessary to create the optimal environment. If the humidity is too high or low, use a sponge with more or less surface area to adjust it. Raise and lower the temperature of the heat source in tiny increments until the thermometer reads 99.5.

Once the incubator is functioning properly, it’s just a matter of maintaining the environment until the chicks hatch. Place the eggs on their side in the incubator, close the door and check the levels religiously to make sure nothing goes askew. Water may have to be added to the pan occasionally to keep the humidity up. At day 18, add more water to boost the humidity level.

If you’re going to turn the eggs yourself, there is a standard method to mimic the efforts of a hen:

In the final days before hatching. the eggs may be observed shifting about on their own as the fetus becomes active. The chick will eventually peck a small hole in the large end of the egg and take its first breath. It is normal at this point for the chick to rest for six to 12 hours while its lungs adjust before continuing to hatch. Resist the urge to help with the hatching process – it’s easy to cause injury!

Once the chick is free from the egg, let it dry off in the warmth of the incubator before moving it a brooder, where it will spend the first weeks of its life.

I am a kindergarten teacher. I just successfully hatched 20 of 22 eggs in an incubator that had an automatic turner and measured the humidity. I followed the advice of the man who gave me the fertile eggs. I went to his farm to get them. Although I picked the eggs up on April 28, he told me that if I kept the eggs in a basement or my garage, I should set them in the incubator on May 1. By doing that, the eggs would hatch so the children could witness the event. It made me nervous to wait,… Read more »

Hello everyone. Could anyone tell what temperature shoul be kept in incubator after 18days ? Is it same temperature from qst day or to be changed? Thanks in advance

I have passion of chickens since I start selling them whilst I was young helping my father, so I want know what kind of eggs are needed to start business of hachery by my own , and any required information on this regards will highly be appreciated

I put 120 eggs my smaal box so how much temperature I need without cooling fan, please sir

I’m a preschool teacher. How about the weekends I won’t be able to turn the eggs. Will the survive?

Thank you so much.

I want to learn more about farming

We have been hatching eggs and have another set that was days from hatching when we lost electricity for 8 hours .
Do you think they are still alive and should continue to let them try and hatch? Or are they gone ? Yesterday they were to start hatching and we have no movement.

This is not our first time so we know what happens when they start to hatch but we are afraid the drop in Temp due to no electricity caused these to terminate .

Popular
7 Smokable Plants You Can Grow That Aren’t MarijuanaBrian Barth
Hell in High Water: The Story of Devils Lake, North DakotaSharlene Breakey
Record-Breaking Egg Profits Prompt Accusation of Price GougingClaire Carlson, The Daily Yonder
6 Differences Between Llamas and AlpacasAndrew Amelinckx
New Solar Panels Allow Farmers to See the LightNaoki Nitta
Explore Modern Farmer
Related
Environment, Labor, Water
California Farms and Farmworkers Attempt to Recover From Record FloodsNaoki Nitta
Books, How-To, Lifestyle
How to Turn Your Garden Into a Business, No Matter the SizeEmily Baron Cadloff
MTMF, Plants
This Modern Farmer Wants You to Grow a New Potato StrainBevin Cohen
Food Security, Labor, news
A New Egg Co-operative Has Hatched in the Western U.S.Lindsay Campbell
wpDiscuz
We use cookies on our website to give you the most relevant experience by remembering your preferences and repeat visits. By clicking “Accept”, you consent to the use of ALL the cookies.
Cookie settings ACCEPT
Privacy & Cookies Policy