Jesse Hirsch: Hi Dad. I’m recording this call. Don’t be mad. Chris Hirsch: Not mad. JH: So what was your career before? CH: I started as a clinical respiratory therapist. Then somehow I stood in the wrong line and ended up in an administrative position — Director of Pulmonary Services at Maine’s biggest hospital. I […] 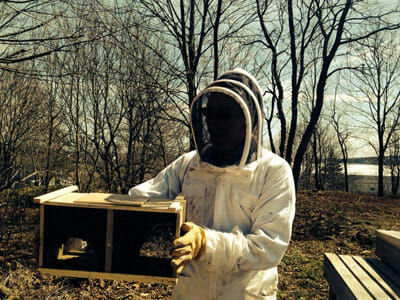 JH: So what was your career before?
CH: I started as a clinical respiratory therapist. Then somehow I stood in the wrong line and ended up in an administrative position — Director of Pulmonary Services at Maine’s biggest hospital. I ended up in a position where I might not even see someone who had seen a patient in 24 hours. 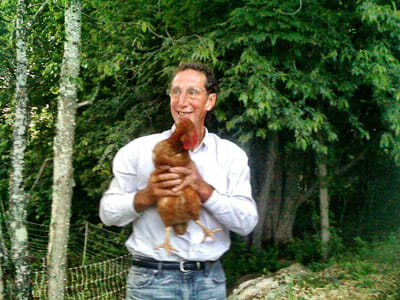 JH: Did you enjoy it on some level?
CH: I loved it the same way I love a lot of things when they’re new. But after a certain number of years I was sitting in meetings, facing my staff, thinking “I’ve heard this before, I’ve done this before.” Guess I was jaded? I just realized someone in my position should be more invested in the work.

JH: Working in your office, under the fluorescent lights, did you dream of farming?
CH: When my mind would wander, I would think about my garden. I always had a garden, except when I lived in downtown Boston. It provided me sanity, fulfilled me in a way that sitting under fluorescents didn’t.

JH: How did gardening help you?
CH: I don’t want to sound Pollyanna or trite, but something about putting seeds in the ground or even just turning over soil — you’re doing something kind of miraculous when you end up with a carrot or a head of lettuce.

JH: Let’s talk about the ’60s. I’ve seen pictures of you with an Afro, wearing a dashiki. Just a cool dude doing cool stuff. Tell me about the commune you started.
CH: My brother Greg and I were in San Francisco and we had a friend who owned a small piece of land in Maine. He was probably going to jail for resisting the draft, and he asked if we’d like to farm his property. We thought, “Yeah that sounds good, let’s go and be self sufficient.” So we hitchhiked across the country, only stopping in D.C. to go to the Library of Congress. I think that’s where we went? Some library.

JH: “Some building or something.” So many drugs, dad.
CH: Ha ha. Anyway we found the Rodale Institute book and the encyclopedia of gardening. We handwrote a bunch of notes on what we needed to do, then headed north. When we arrived in Maine in April, there was snow everywhere. As the snow melted, we found out it was basically just a swampy backyard, probably a half-acre with tires and other things buried in the ground.

It was tough getting it to be a garden but it worked. Initially it was just me and my brother. Then a bunch of refugees from San Francisco were like “Yeah sure that sounds good, we can farm.” We ended up with 10 or 12 people there, all with their own melodrama. It ended up being not really about self-sufficiency. Some other spirit took over.

She could tell this wasn’t some ‘I want to be a farmer when I grow up’ fantasy.

JH: Bummer. Let’s flash forward a bit. You quit your hospital job in 2011. Did you know right away you were going to work with the land?
CH: Well I had always loved bringing fresh produce from my garden and having someone turn it into beautiful food. But you’ve seen my garden. I could always grow more than (my wife) Janey and I could consume. So I thought it would be great to grow for a restaurant with a chef doing wonderful things. I’m still not sure how I ever got hired, what with having no professional experience.

JH: I remember you called to ask me about farm to table buzzwords. Like “How do I talk to a chef about this stuff?” You seemed really nervous you wouldn’t get the job.
CH: Yeah I was pretty nervous. I also got worried when I didn’t hear from the chef for awhile after I applied. Guess I should have realized that hiring a part-time gardener wasn’t her primary focus. The fact that she didn’t answer my email the same day I sent it, I took it very personal.

JH: Was the chef skeptical of your Palmolive-soaked hands? You were an office worker.
CH: Not really. I think she could tell this wasn’t some “I want to be a farmer when I grow up” fantasy. Gardening had always been a part of my life; I think that won her trust.

JH: I bet there was a steep learning curve. I mean, you had to tend to chickens and pigs and bees.
CH: Oh yes. Even the garden stuff was new to me. I was used to a home garden, which is very different than making sure you have a steady supply of menu staples throughout a growing season.

JH: How much of the restaurant’s produce do they source on site?
CH: At the top of their game, between 70 and 80 percent.

JH: That’s pretty good! Tell me about any rookie mistakes you made.
CH: The first time my boss showed me how to deal with chickens, I hadn’t mastered the mechanics of getting my body over the fencing. My foot got all tangled up. I didn’t fall into chicken shit, which is good. But it was close.

JH: For this story I kind of wish you had. It’s funnier if you fall in shit.
CH: Right. 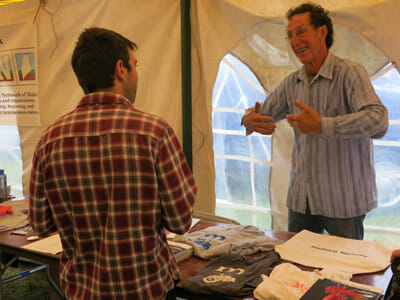 JH: I heard you’ve had some troubles with the bees.
CH: Yes I’m their beekeeper now, though I have a mentor who helps out during the season. The hives have been struggling. We had five hives, now we’re down to three. It’s a bummer. We’re trying to stay as organic as possible, but I’m not sure. I think sometimes bees in cultivation might need extra help. At times it seems obvious the problem is varroa mites. I wonder if we should treat them.

JH: I think it’s ‘omg’, dad.
CH: No no, I like their energy. Of course my wife thinks it’s weird that I’m surrounded by kids in their 20s, and my old friends think I’m into it because I’m lecherous.

JH: Okay, let’s wrap this up. Final thoughts. Would you recommend people toss away their day jobs, to become modern farmers?
CH: Frankly it depends what their financial situation is, or what struggles they’re willing to accept. I had retirement savings when I took this on, and a partner, but if I was your age, I’d have to think long and hard about it.

Popular
The Fertilizer Shortage Will Persist in 2023Shea Swenson
7 Smokable Plants You Can Grow That Aren’t MarijuanaBrian Barth
Agricultural Runoff Pollutes Well Water, a ‘Public Health Crisis In the Making’Madison McVan, Investigate Midwest
Mentally Disabled Slaves Mine Fancy Salt For South KoreansDan Nosowitz
Why Don’t We Eat Turkey Eggs?Dan Nosowitz
Explore Modern Farmer
Related
Features, Food Security, Labor
The Rise of Virtual Farmers MarketsLeah Borts-Kuperman
Features, Food & Drink, Fungi
Could New York Become the Mushroom State?Sara Foss
Environment, Labor, Water
California Farms and Farmworkers Attempt to Recover From Record FloodsNaoki Nitta
Books, How-To, Lifestyle
How to Turn Your Garden Into a Business, No Matter the SizeEmily Baron Cadloff
wpDiscuz
We use cookies on our website to give you the most relevant experience by remembering your preferences and repeat visits. By clicking “Accept”, you consent to the use of ALL the cookies.
Cookie settings ACCEPT
Privacy & Cookies Policy