The funniest donkey around, and how he got to be so darn funny. 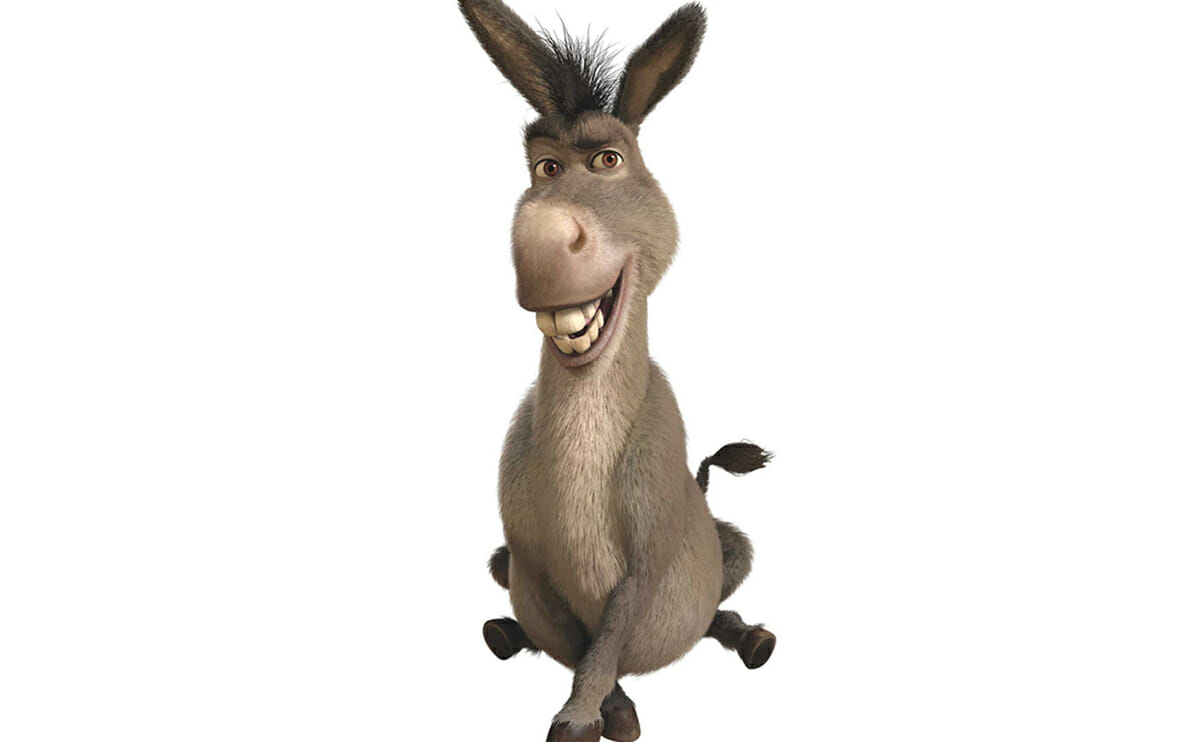 The donkey in the movie Shrek, so aptly named ‘Donkey,’ is one of the most beloved computer-animated sidekicks of all of time. He is known for his hyperactive (and sometimes annoying but always endearing) demeanor, his idle chatter, and of course, his all-consuming love of waffles.

The friendship between Donkey and Shrek follows the trope of the classical comedic film duo ”“ think Abbott and Costello or Laurel and Hardy ”“ the two amigos are a nice pairing of opposites. But does Donkey really have to be a donkey? Couldn’t he have taken some other anthropomorphized animal form — like a puppy, a goat or even a horse?

Since Shrek takes place in a kingdom, Donkey’s character clearly had to be some variation of a noble steed in order to stay true to the medieval theme. But as a mockery of the whole knight-and-shining-armor trope, having a donkey instead of a horse play the sidekick role ”“ a character so bouncy and small in comparison to the big, green ogre ”“ is, well, hilarious.

You might want to learn more about the creation and the development of the greatest animated film character to ever grace the world with his presence (Editor’s Note: Possibly not an objective view).

Character designer Tom Hester dreamed up the original designs for several of the main characters in Shrek, including Donkey. “I wanted his actual anatomy to be accurate,” says Hester, who initially found a striking image of a donkey in the foothills of France. He used this picture to construct the anatomical consistencies, yet he doesn’t recall the specific breed. And to this real-life image of a donkey, Hester added his own cartoonish qualities. “I was trying to keep it a very cute character, so I needed a lot of round shapes in the nose and so forth.”

After discussing the rough vision for the character with the directors and other 3D artists, Hester created a series of small clay sketches ”“ essentially, a preliminary idea of what Donkey might look like. He then worked on several gestural maquettes, or clay renderings of Donkey taking various poses, to provide more insight into Donkey’s character and personality.

“I tried to get that Eddie Murphy spark into it without literally trying to match something on his face.”

When the film’s directors were happy with his renderings, Hester created a final large sculpture (about 15 inches tall) portraying Donkey in a neutral stance. This final maquette is the image that the animators used to create the computer-generated version of Donkey. All and all, he spent about two years sculpting and dreaming up the character, while working on a couple of the other other Shrek characters simultaneously.

In addition to quite a bit of time spent sculpting and re-sculpting Donkey, there was a lot of back and fourth with the directors and the storyboard artists about everything from Donkey’s eyebrow shape to the size of his eyes in relation to his mouth. “He definitely needed a larger body and a larger head and just spindly little legs so it was comical and he could move around pretty quickly.”

Though the Shrek script was yet to be fully fleshed out when Hester began his renderings, actor Eddie Murphy had already been selected to do the voice. Murphy was another important factor for Hester to consider. “I tried to get sort of that Eddie Murphy spark into it,” says Hester, who sought “to get a sense of Eddie Murphy in there without literally trying to match something on his face.” And this wasn’t an easy task.

Though Donkey played a very minor role in the original book version of Shrek (written by William Steig in 1990), he plays a much larger part in the film version. Donkey is known for saying hilarious things and for breaking randomly into song ”“ yet much of this humor wasn’t written explicitly into the script. “You have to create strong personalities,” says Tom Sito, one of the early storyboard artists for Shrek, “and then the humor will derive from the personalities.”

Eddie Murphy set the tone for much of the film’s humor and even some of the plot. The role of Shrek was originally supposed to be played by comedian Chris Farley, who had recorded nearly 80 to 90 percent of his lines when he died suddenly of a drug overdose. Mike Meyers, his best friend, stepped in to take over the role. “When Mike did it, he worked off of Eddie’s performance,” says Sito, “[Eddie] did Donkey as this bright, enthusiastic kind of free-spirit character ”“ to play off Shrek being a little more downer, and a little more like leave-me-alone-I-don’t-want-to-be-bothered-with-you.”

Many of Donkey’s funniest lines and most memorable moments were a product of Murphy’s improvisation.

In playing off of each others’ energies, many of Donkey’s funniest lines and most memorable moments were a product of Murphy’s improvisation. Though a rough idea for the plot had already been developed when Meyers and Murphy began reading out the story, some of Donkey’s greatest lines (such as his exclamation about making waffles for Shrek) were what Sito calls “an Eddie improv.”

Other parts of Shrek’s plot emerged through tossed-around ideas among the storyboard artists. One of Sito’s greatest claims to fame (aside from coming up with the name for Evil Lord Farquaad) was his idea for the whole romantic subplot between Donkey and Dragon. “The classic thing with any Eddie Murphy character is if you threaten him or corner him, he just starts talking,” says Sito, who proposed the idea that Donkey try to talk his way — or heck, flirt his way — out of his life-threatening encounter with Dragon. “And then another one of the writers said, oh, that’s great — we could make [Dragon] a she, and everybody says oh we can do this, oh we can do that. And then the next thing you know, it’s become a main part of the plot.”