This Worm Is Genetically Engineered to Spin Spider Silk

If you always thought it would be a great idea to breed silkworms that produced spider silk, it turns out you weren't the first. 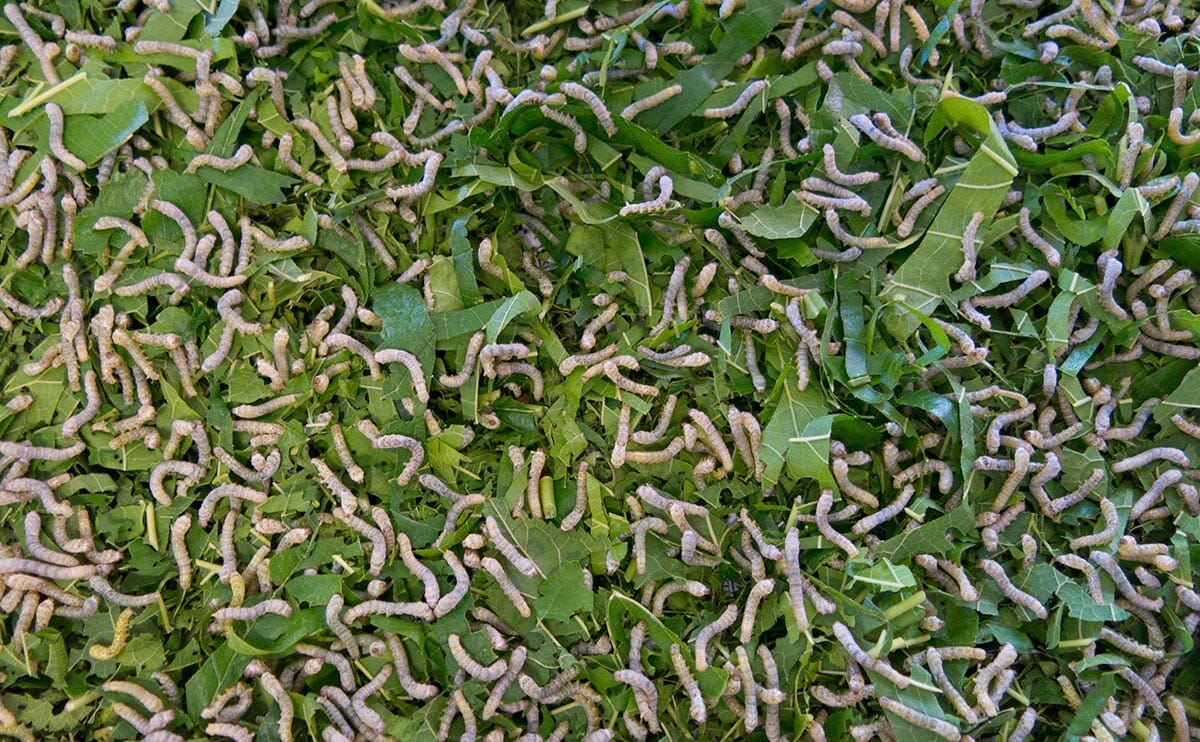 Silkworms are the larvae of the silk moth, one of thousands of insect species that wrap themselves in cocoons as they prepare for metamorphosis. It’s one of nature’s most industrious insects — and the only one that has ever been domesticated.

The Chinese perfected the art of harvesting the single, half-mile long thread that forms each cocoon, transforming worm silk into a luxurious fabric at least 5,000 years ago. Dr. Randy Lewis of Utah State University’s department of biological engineering is looking to improve on the ancient practice – as are many of his competitors in the emerging field of high performance biomaterials.

Silkworm silk makes wonderful scarves and undergarments, but biologists have long had their eyes on spider silk. The webs of some arachnid species have the tensile strength of steel, while remaining completely elastic. “The difficulty is that spiders are territorial and cannibalistic,” says Lewis. “Unlike silkworms, you can’t just put them all together and expect them to have a nice, happy tea set.” In short, spiders have resisted all efforts at domestication – not to mention, who would want to farm spiders? And bushwhacking through the jungle to harvest the best wild spider webs isn’t cost effective.

For a genetic engineer daydreaming of spider silk produced in a commercially viable way, it doesn’t take long to connect the dots to the docile, communal silkworm. In parts of India, China and much of Southeast Asia, they are traditionally reared by the thousands in small wooden crates in the huts of rural peasants. The farmer must also grow mulberry trees, the leaves of which are the only thing a silkworm will eat. While the methods for spinning silk threads into fabric has become wrapped into the fold of the global textiles industry, the practice of raising the worms and unwinding each cocoon by hand has been surprisingly untouched by the tentacles of modernization.

Not so with silkworms and their genes, however. Feeding silkworms artificial colorants has produced ‘pre-dyed’ silk threads that preclude the need for the costly and toxic silk dyeing process (apparently with no harm done to the worms). Researchers in Japan have engineered silkworms to spin glow-in-the dark thread for use in high-end fashion design in hopes of building a niche silk market that will put a dent in China’s global dominance of the silk trade.

But the holy grail of silkworm gene splicing is to make the little larva pump out spider silk, a substance that can be woven into products that make Kevlar look flimsy. Interested parties have been salivating for years over the potential applications, which go far beyond fabrics: The U.S. Navy wants spider silk for its ability to adhere to any material, even underwater; the Department of Energy is hoping to make vehicles lighter and thus more fuel efficient by integrating silk proteins into the manufacture of door panels; and the Air Force is envisioning lightweight, bulletproof body armor that is easier to maneuver in during combat. The medical applications are all over the map: artificial skin for burn patients, better Band-Aids, synthetic ligaments, micro-sutures for delicate organs like the eyes and host of surgical implants and drug delivery mechanisms.

After decades of research, several major hurdles remain before spider silk technologies are commercialized. “The worms we have now make about five percent spider silk and ninety-five percent silkworm silk in their cocoons,” says Lewis. They need to reach a threshold of 20 to 30 percent spider-silk protein before he would feel confident that bulletproof-silk vests could be a commercially viable reality. He also warns that “the gene is not as stable as we would like … after several generations the amount of spider protein starts to drop.”

If and when he is successful, Lewis will have to face the FDA approval process before he can begin scaling up his operations, which is stringent when it comes to genetically modified organisms. Silk moths have been domesticated for so long they can no longer fly, which Lewis believes should ease any concerns that the public or regulatory bodies may have over the novel genetic material getting off the farm and into the food chain. “They have these little bitty wings and I guarantee you, they are never going to get off the ground … the odds of them getting out into the wild are zero.”

If they were permitted for agricultural purposes, transgenic silkworms would be the first non-plant crop to make it from the lab to the field. But he acknowledges that commercialization could be thwarted by the approvals process. “The regulations, quite frankly, are stiffer than there would be any argument for them to be scientifically,” he says.

While the whole concept of genetic engineering remains up for debate, whether for plants or animals, Lewis can think of a lot of environmentally sound reasons to genetically engineer silkworms. The enhanced fabric has potential to replace synthetics like nylon and Kevlar, which are petroleum products. He also lists various industrial applications where silk protein could be manipulated into an all-natural alternative for adhesives, gels, coatings, sponges and sealants that are currently manufactured with substances known to be harmful to the environment — if not human health. Silk is essentially a bio-compatible molecular “scaffold” that is genetically malleable enough for any number of physical or biological properties to be stitched into.

“We see this as a pretty green technology,” says Lewis. In the same vein as using GMO corn to make bio-plastics, Lewis sees his silk applications as a small piece of the climate change puzzle, doing their part to sequester carbon from the atmosphere by “taking C02 and making it into something that is currently petroleum-based. Silkworms are eating plants that took [in] C02 and are making it into [silk].”

But it may be a while before villagers in Cambodia are raising spider silk-emitting worms, if ever. Even if the technology is eventually proven successful, the business models surrounding genetically engineered organisms may preclude small, subsistence-style farmers – who currently produce almost all of the world’s raw silk – from ever accessing the improved silkworm eggs. “In all likelihood, there would be a very restricted number of growers that would be very tightly controlled,” says Lewis of the corporate structure he envisions to protect the intellectual property rights of the genetic material. “Let’s be honest, there are parts of the world where they would have no concerns over taking the technology themselves and turning around and selling those products.”

In Lewis’ estimation, taking the technology overseas seems unlikely at best. Since there is currently no form of commercial silk production in the United States whatsoever, it begs the question of who will be growing the worms if, and when, FDA approval is granted. Will highly profitable spider-silk farming operations begin popping up domestically?

It’s too early to know, but if spider silk-spinning worms don’t pan out, Lewis still has several other cards to play. Down the road from the USU lab where the silkworm vivarium is housed, there is a secure facility that’s home to a small herd of goats who carry spider silk genes in their milk. Not far from there is a lush field of alfalfa, whose small oval-shaped leaves also contain a bit of arachnid DNA. There is another lab on campus where vats of E. coli are fermenting, impregnated with the same spider genes (according to Dr. Lewis, FDA approvals for GE bacteria are a walk in the park compared to plants and animals).

Fiber-based applications like bullet-proof vests and military parachutes are not feasible with the spider silk proteins Lewis extracts from goat milk, alfalfa hay and E. coli, but many of the other proposed medical and industrial products are. In the event that one of the Lewis’ spider silk projects advances to commercialization, it will be a goldmine for the companies who purchase the licensing rights. The benefits to farmers, the food chain or ecosystems are less clear.