The Silky, Milky, Totally Strange Saga of the Spider Goat

But let’s get this out of the way: These goats can’t set webs to catch their prey, they don’t possess super-strength, and they aren’t tottering around the barn on eight bony legs (as amazing/terrifying as this would be). No, spider goats look, snuggle, and frolic just like the goats we all know and love. They […] 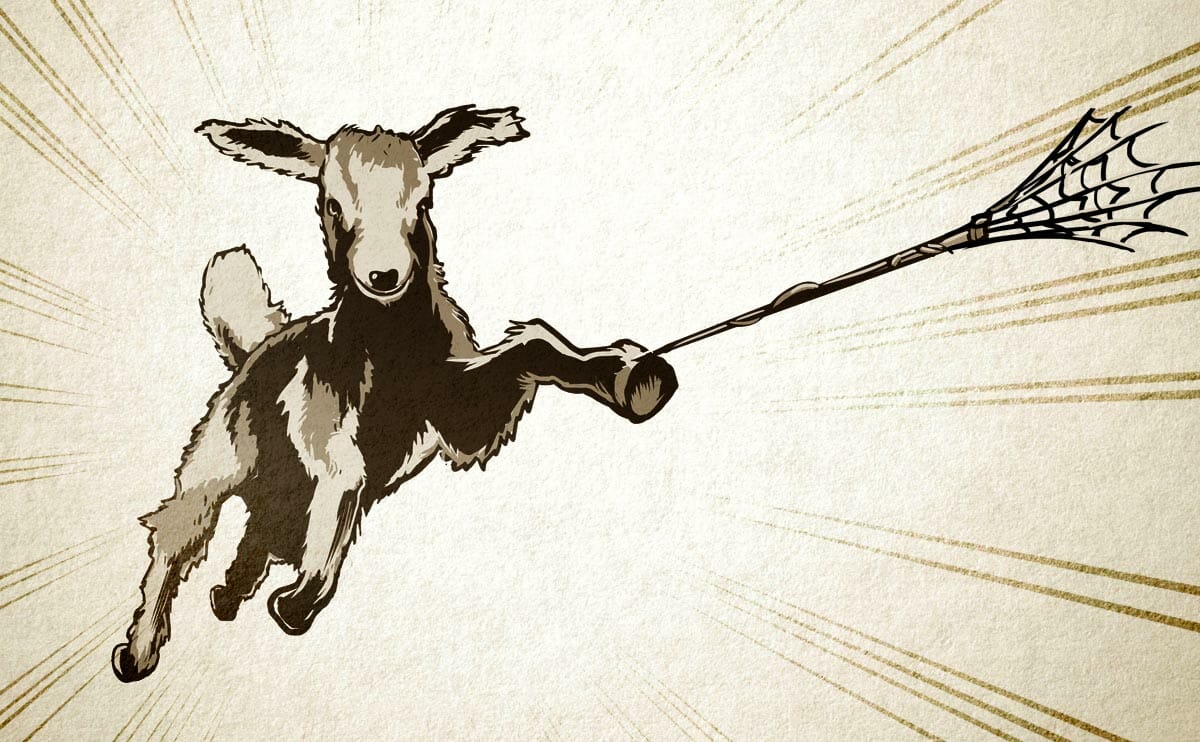 But let’s get this out of the way: These goats can’t set webs to catch their prey, they don’t possess super-strength, and they aren’t tottering around the barn on eight bony legs (as amazing/terrifying as this would be). No, spider goats look, snuggle, and frolic just like the goats we all know and love. They have just a wee bit of spider DNA squirreled away in their genetic makeup. The only outward difference between spider goats and your garden-variety ruminants is in their milk: It contains elements of golden orb spider silk.

The milk is not for human consumption, at least not in the chÁ¨vre sense — it is meant to be refined, so the silk can be extracted and made into body armor, parachutes, fishing line and surgical sutures. See, golden orb spider silk is one of the strongest, most impenetrable substances on the planet, and it’s also extremely lightweight. Kevlar was built to replicate this wonder fiber, but the real deal would be even better.

The problem is, golden orb spiders aren’t the most efficient factories for their own silk — they’re too little. To produce a rare, 11×4 piece of textile from golden orb silk, it required one million spiders, 70 workers, and four consecutive years of silk collection. That level of production isn’t going to work for the Pentagon, which has expressed interest in producing golden-orb vests for security personnel. Enter the spider goat, a scaled-up factory for spider silk production.

A company called Nexia Biotechnologies began researching spider goats over a decade ago, dubbing their fiber BioSteel. The project got some inevitable Island of Dr. Moreau comparisons — it helped that Nexia had a charismatic, larger-than-life doctor/CEO and a remote location on a former maple-sugar farm in rural Quebec. ”It’s nothing short of a revolution,” CEO Jeffrey Turner told the Times back in 2002. ”This special silk is the first transgenic material ever made. The amazing thing, however, is that we’re changing the world from a tiny low-rent sugar farm, and our only machinery is a goat.”

Nexia went bankrupt in 2009, before its spider goats were ever utilized on a mass scale. Two of the last spider goats were given to the Canada Agriculture Museum — a gift which made one professor very angry — and the project would seem to have ended. But one researcher at Utah State University picked up where Nexia left off.

Dr. Randy Lewis now has about 30 spider goats at a USU-run farm. Lewis has become something of a genial spokesman for the trangenic movement, frequently displaying his adorable goats (please meet Freckles, Pudding and Sweetie) in an attempt to convince the world of their normalcy. He’s the subject of a young adult non-fiction book called Stronger than Steel, and Al Gore referenced his research in an NPR interview this year.

Lewis has worked on other potential hosts for the golden orb silk gene, including transgenic alfalfa, silkworms and even e.coli bacteria (a rapid reproducer). But goats are his trophy silk producers; the others are experimental backups.

One other creature recently emerged as a serious competitor to the spider goat — the lowly, ugly hagfish. Scientific American reports that Canadian researchers have had good results extracting BioSteel-like fibers from hagfish slime. No transgenics are necessary; it’s naturally produced. The hagfish secretes the slime at a prodigious rate, making it a strong contender as the next BioSteel producer.

But who wants to snuggle a hagfish?

This doesn’t have information on what I need