Canned: A WWII-Era Community Cannery Hangs on in Rural Virginia

A look inside the 7-decade-old community cannery. 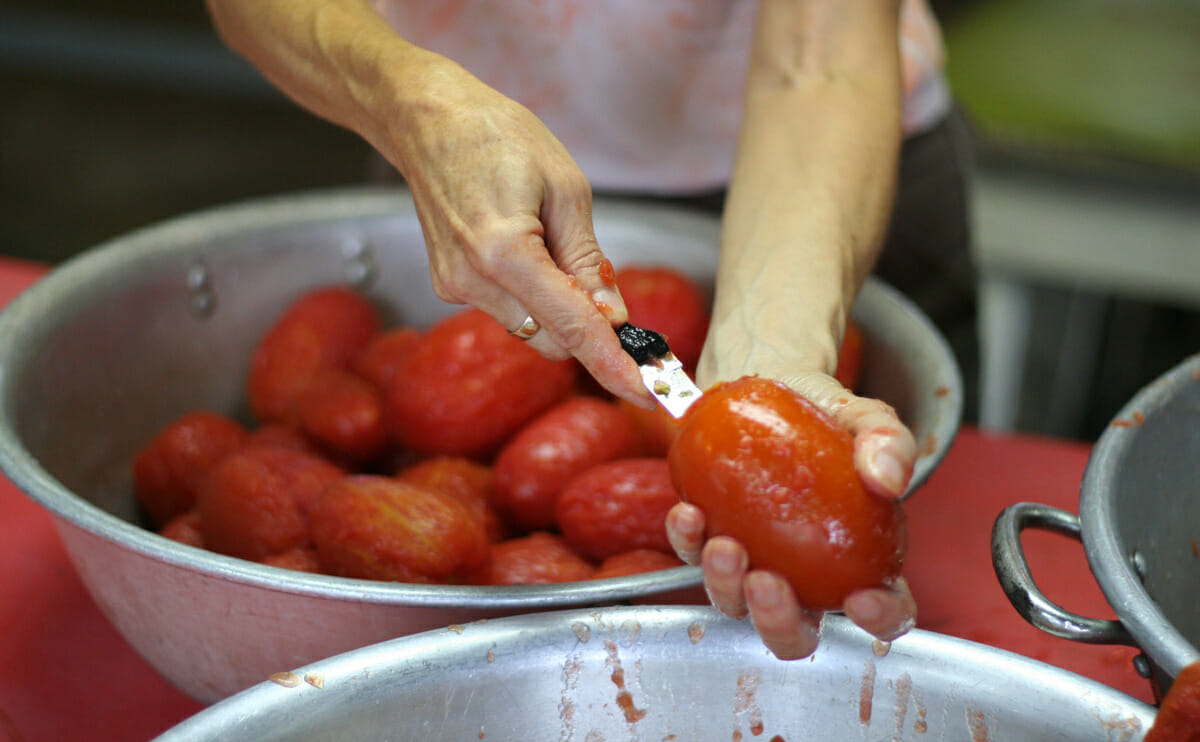 Meanwhile, the Washington D.C., suburb of Falls Church probably has about a million stoplights and zero community canneries. And so, on a late summer day, Fonda Nichols and Lise Metzger, two friends from Falls Church, make the two-hour drive out to Keezletown on a late summer day with 75 pounds of organic Roma tomatoes specially ordered from their CSA.

Nichols and Metzger made the trip to take advantage of the industrial-grade canning equipment ”“ like the pressure cooker so large it’s loaded with a chain hoist and sealed with a wrench ”“ available, for a small fee, to anyone who wants to can a lot of food a lot faster than could be done at home.

“This is how we have fun. It’s different to pull a jar out of the cupboard that you canned yourself,” adds Metzger, who first read about community canneries like this in a dentist’s waiting room.

This particular cannery opened in 1942, during the World War II “Victory Garden” push to encourage the American public to become more self-sufficient while so much food was being sent to feed soldiers overseas. By the end of the war, according to a 1977 USDA publication, there were more than 3,800 community canneries in the country.

“I’ve seen a lot go on here, that’s for sure,” says Trudy Hammer, 83, who ran the cannery for 29 years until recently passing the reins to her daughter-in-law. “But you still learn things every day.”

Soon after the Victory Garden craze ended, however, modern supermarkets, home freezers, changing tastes and other factors began thinning the cannery ranks. In 2012, a Virginia Cooperative Extension agent named Donna Meade found that just 14 community canneries remained in the state, when she wrote her master’s thesis on the topic. (The Keezletown Community Cannery claims to be the last in operation founded during World War II; Modern Farmer couldn’t confirm or refute this, and Meade’s research didn’t focus on the history of any of the other canneries that are still in operation).

Nichols and Metzger wash, then blanch, then peel the tomatoes, then cook them down in the cauldron-sized steam cookers, ladle them into jars and hoist them into the pressure cooker, a few hours’ work in exchange for a winter’s worth of canned tomatoes.

Tomato season will soon give way to applesauce and apple butter, before meat takes over in the dying days of fall. People bring pork. People bring deer. September and October are the busiest months, with about three canning appointments ”“ set up in advance by phone ”“ per week. Over the course of the season, maybe 40 or 50 different people or groups come in to can. A handful, like Nichols and Metzger, are relatively new on the scene and/or come from far away. Most have been coming for years, decades, forever. When it starts to freeze at night, Sandra Hammer, the daughter-in-law who now manages the cannery, drives over before bed to load the wood stove, the only source of heat in the aging, uninsulated building. And when winter truly sets in, somewhere between Thanksgiving and Christmas, they drain the pipes and close the doors and wait more than half the year until the next crop of tomatoes is in.

A handful are relatively new on the scene and/or come from far away. Most have been coming for years, decades, forever.

Most canneries were supported by local governments, and most eventually closed their doors when those county governments pulled funding for one reason or another at some point along the way. In 2009, the same fate nearly befell the Keezletown Cannery when its funding was struck from the county budget. Rather than see the place close, a local nonprofit called the Horizons Learning Foundation took over and has run the cannery ever since.

The cannery walks a difficult line trying to keep the frugal, DIY act of canning affordable while taking in enough to keep the boiler fueled and running. This year, prices went up: canners pay a one-time user fee of $15, plus about $1 per can for tin or 50¢ for glass. Metzger and Nichols did the math on their costs, including the drive, and figure they could have gotten organic canned tomatoes for half the price at the supermarket at home. Dollars and cents clearly aren’t everything to the two of them; the reward of pulling their own cans off the shelf later this winter ”“ and the prospect of a morning spent canning followed by a picnic lunch in Keezletown ”“ made it worth it to them.

For some of the older, longtime patrons of the cannery, though, preserving large amounts of home-grown or hunted food remains an important part of making ends meet. And even with the increased prices they’re now being asked to pay, the cannery runs in the red and is dependent on donations and other support.

“Basically, this is charity. What it really boils down to is whim and charity,” says Rick James, a spokesman for the Horizons Learning Foundation.

He says the group is committed to keeping the Keezletown Community Cannery open, and is pleased by what he calls a slow but steady increase in usage.

With gardening back in vogue, Meade says, those community canneries that have hung on now represent “a tremendous asset” ”“ places where “communities come together” and learn to “hold onto ways that used to be.”

Canneries like the one in Keezletown that have been operating for decades have been “grandfathered in” to exemptions from all sorts of health and safety regulations enacted since World War II. Contending with those would make opening a new facility far more expensive.

“That’s gonna cost a big penny,” declares Trudy, seated at the desk from which she managed the cannery for so long.

You know what else will cost a big penny? Doing something about the 25-year-old boiler in Keezletown, which has one foot in the grave. Repairs delayed this year’s opening; the topic of replacement was discussed and boilers don’t come cheap. The cannery’s been chugging along for more than six decades now. Does Trudy think it’s going to be here for a few more? That’s a hard question. She shrugs. Who knows what the future holds. For now, at least, things continue: hissing steam, clanking pots. Another group of women from a few counties over has arrived with a load of tomatoes.

During one of Modern Farmer‘s visits to the Keezletown Community Cannery, Sandra Hammer and her mother were making zucchini pickles ”“ a sweet and unexpected twist on zucchini cuisine.