7 Ways to Shop Smarter at the Farmers Market

Tips for winning the farmers market. 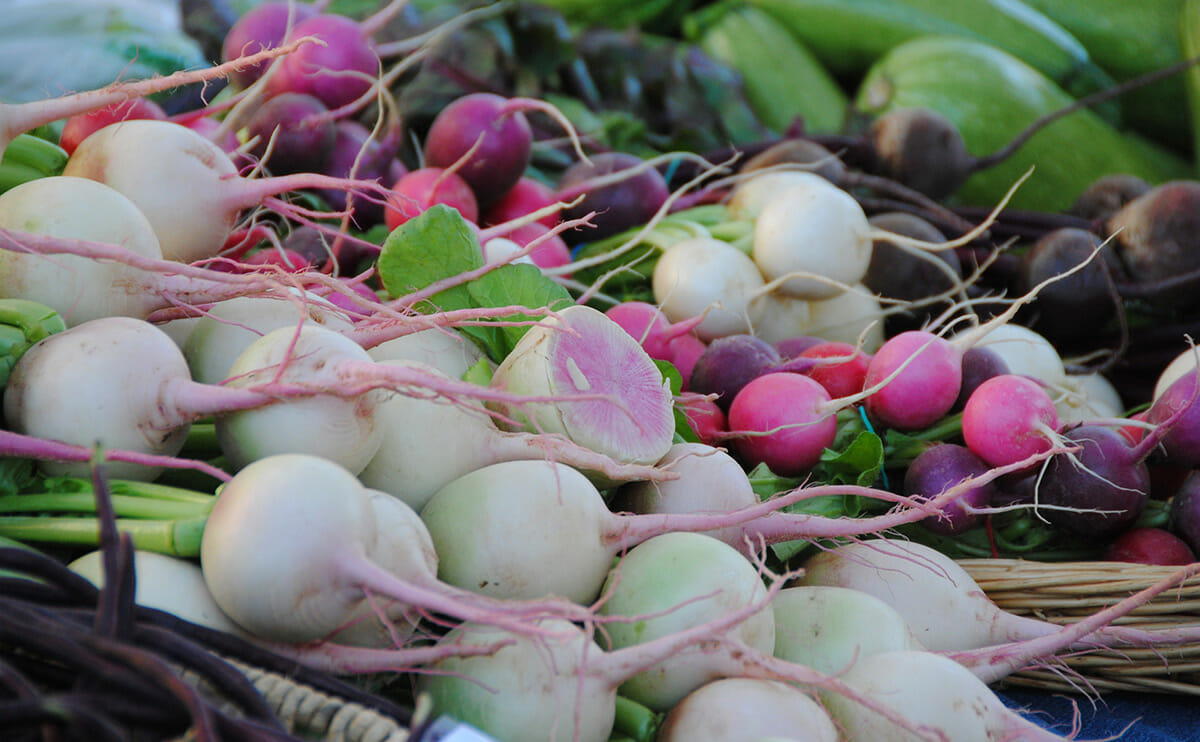 It’s harder to go wrong at a farmers market than a grocery store, but we wouldn’t want anyone to make any shopping (or etiquette) mistakes that could detract from the experience. Here are a few tips to get the most from the markets.

Root vegetables like carrots, beets, and radishes are sometimes sold both whole, with greens attached, and trimmed, as merely a bunch of roots. Always opt for the whole version. They’ll last longer than the trimmed roots, for one thing, but more importantly, the greens are both edible and delicious. Washed carefully, they all make a great, earthy pesto, and radish and beet greens can be prepared the same way as chard or kale. Free bonus food!

2. Think of Time and Place

The crates of apples can be appealing in the hot days of summer, but those apples have been sitting in industrial refrigerators since they were harvested last fall, losing flavor and texture the whole time. Have a peach instead! The same thing applies to locality: if you’re in the Northeast or Midwest, don’t bother with bananas or avocados. If you’re in California, well, pretty much everything can be grown there. Nevermind, and congratulations. Epicurious has a helpful map laying out what’s in season and where.

If you’re in a big city, treat the farmers market like brunch: get there early, or pay the price. Vendors will often sell out of their best products by early afternoon. This is especially true of highly perishable items like seafood and meat, which need to be kept on ice. If you’re after fish, show up early.

4. Not Everything is Better

The produce at a farmers market is usually going to be different than at a grocery store. Learn how to pick out the tastiest heirloom tomato, even though they all look equally deformed. Learn to scour the bins of Brussels sprouts for the tightest, smallest ones. Learn to snap a green bean between your fingers to see if it’s ripe. Learn to smell a melon. This is a pain, sure! But the farmers themselves will usually be happy to pick out good produce for you, or of course you can Google it. The little bit of extra effort be worth it.

At most reasonably sized markets, there’ll be more than one vendor selling certain items, whether that’s peaches or grapes or zucchini or oysters. Before you buy, take a lap around the market, trying samples, using your new produce-hunting skills to figure out the quality and ripeness of the produce, and, just as importantly, scoping out prices. You don’t want to buy the first pint of blueberries you see, only to find a cheaper, tastier pint at the opposite end of the market.

Your market is likely home to products you can’t find at the grocery store. So why not try them out? Instead of a standard deep purple eggplant, why not a tiny globular Thai or a long pure white eggplant? Instead of red radishes, why not watermelon or French breakfast radishes? Instead of salmon, why not porgy or sand dab or pickerel? There’s nothing wrong with just getting good, fresh versions of what you usually eat, but the market is also an opportunity to step outside your habits and eat what’s growing nearby.