After Disease, the Triumphant Return of New Hampshire’s Chicken Swaps

After an outbreak of respiratory disease among chickens at the New Hampshire Chicken Swap, the event seemed dead as the dodo. But after some hard work (and quanrantines), the chicken swap has made a triumphant return. 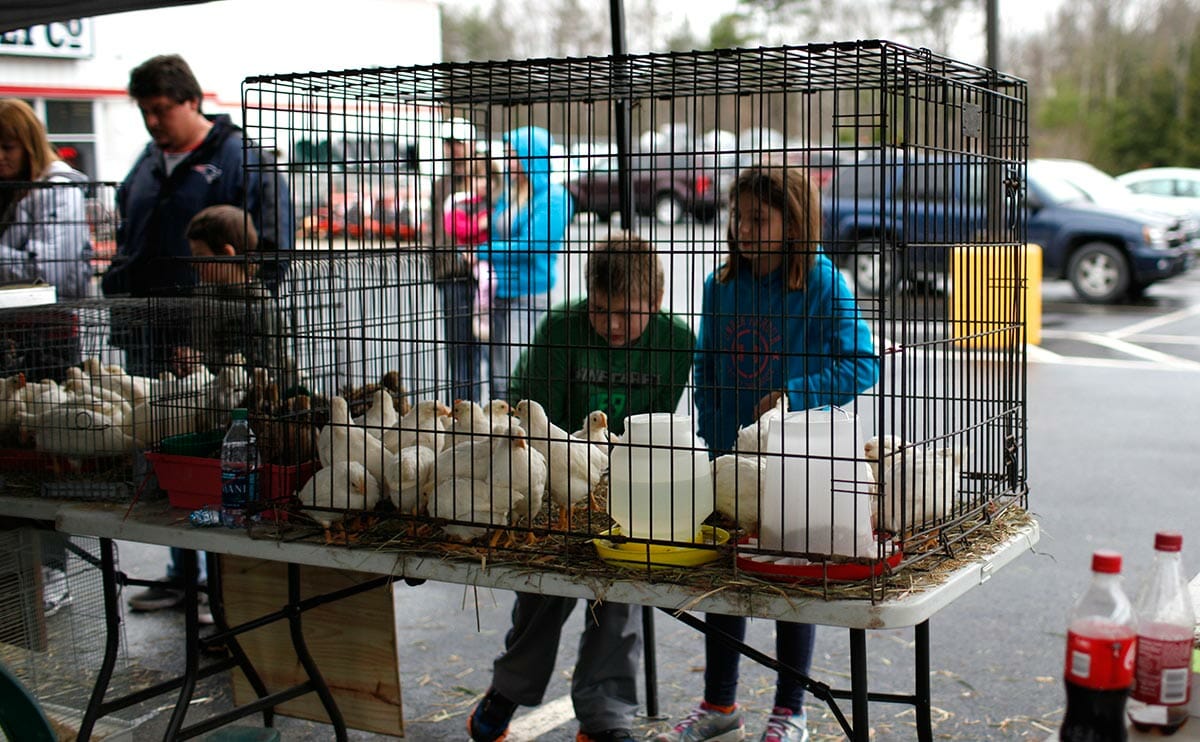 Chickens were catching MS and MG (Mycoplasma Synoviae and Mycoplasma Gallisepticum, respectively), respiratory diseases that result in sneezing, coughing, lethargy, lack of appetite and wheezing. Hatcheries weren’t required to test for the diseases, allowing them to run rampant across the state with fatal results for flocks. “Go out one day, a few are dead; the next day more are dead,” Cupples says.

A hunt commenced to uncover the cause of the outbreak, which Cupples likened to the hunt for Typhoid Mary. Typhoid Mary (real name: Mary Mallon) was a cook who lived around New York City in the late 19th century. She carried a virulent case of typhoid fever but showed no symptoms, eventually infecting around 50 people as she moved from job to job, resisting the police’s inquiries into just who was causing the mysterious outbreaks. After she was finally arrested, Mallon was quarantined for over 20 years until her death in 1938.

This time, the culprits were birds.

‘When they brought them into other people’s flocks, they were like the plague.’

“We had a vendor who showed up in the March swap of last year,” says Collins, a stout, mostly bald man who grew up on a farm in Auburn, New Hampshire, and proves it with his accent. “All the birds looked fine. The vendor sold quite a few. Then phones started ringing a few weeks later, from people with illness in their original [and previously healthy] flocks.” The offending vendor’s chickens had developed immunity to MS and MG that others lacked. “When they brought them into other people’s flocks, they were like the plague,” Collins says.

Collins teamed up with New Hampshire’s Department of Agriculture and sent out emissaries to collect blood samples from the infected chickens, eventually tracing the outbreak back to its source. “We shut her down. She closed her flock and stopped selling,” Collins says. “We shut swaps down just to make sure we wouldn’t spread it.”

On a damp, gray Sunday afternoon in April at a Tractor Supply Company store parking lot just off the highway in Chichester, New Hampshire, the Chicken Swap made its triumphant return. A clutch of tents hosted chickens and ducks rustling in their cages, a trio of goats in a hay-floored pen, and a lone calf was tethered to a pick-up truck. The animal vendors were required to register before the event, and a state health inspector made the rounds in the morning looking for any errant wheezing.

Linda Hemingway, of Beauty Ridge Farm in Loudon, stocked Brahma chickens with feathered legs, barred Plymouth Rock birds, and fluffy-tailed Ameraucanas, prized for their parti-colored eggs. “We do everything we can to make sure the vendors have really healthy stock,” said Hemingway, who has participated in swaps for the past three years. “It’s all about being a responsible animal vendor.”

The best way to protect chickens from getting sick is to quarantine any new bird getting introduced into the flock. Brandy Deno, co-owner of Beauty Ridge Farm, recommends at least 30 days of separation, placing the animal far enough away so that it’s not breathing the same air as the rest of the flock. Use different feed for the animal, wear different clothes when you’re feeding it, and wash your hands before and after.

‘Quarantine everything — I don’t care who you buy it from. It’s an easy thing that will protect your whole flock and your investment in your birds.’

Deno’s advice became a refrain at the swap. “Quarantine everything – I don’t care who you buy it from,” Deno warns. “It’s an easy thing that will protect your whole flock and your investment in your birds.” Keeping a new animal apart from the flock might be second nature to professional farmers, but for amateur animal husbandrists, it has to be taught. “That’s where we come in. Being a responsible vendor, you have to tell people, educate them,” Deno says. “We’re not just here to make a buck.”

Richard Korpieweski, a tall, rough-hewn man in a farmer’s jacket, crouched under a tent looking over cages occupied by a variety of ducks with the help of his enthusiastic son Owen. The pair sells under the name Boy and His Ducks.

On the floor were elegant pairs of Muscovy ducks, serene compared to Beauty Ridge Farm’s frantic banties. Their colors ranged from slate ripple to iridescent green and glowing bronze. Other cages on stands held smaller Call ducks, which were originally bred in Europe to act as live decoys, tied by the leg and let loose in a pond to attract other ducks to the slaughter (the practice is now illegal).

“In the springtime you can move ducks like crazy,” Korpiewseki said. The eggs are popular, but ducks are also catching on as pets. “Chickens are personable in their own ways,” he says. “Ducks are more talkative – they look at me, they chat with me. They interact differently. Chickens can have this nice cuddly effect. Ducks can be the same way if you raise them properly.”

Amateurs concerned about avian infection might also want to consider starting with ducks. “There are diseases that ducks get, but for the most part they’re pretty bombproof,” Korpiewseki says. “They really don’t get sick too much.”

Cupples, a lively woman in a floppy, blue Chicken Swaps of New Hampshire sweater, presided over the re-launched event from a small stand, registering customers as they left with their purchases. “Numbers have gone way, way up, amazingly so,” she says. “It’s very, very addictive, like potato chips.”