The Duck Egg Market Takes Off

Many farmers actually started raising ducks because of personal nutritional needs, and then found that there was a demand for duck products almost by accident. 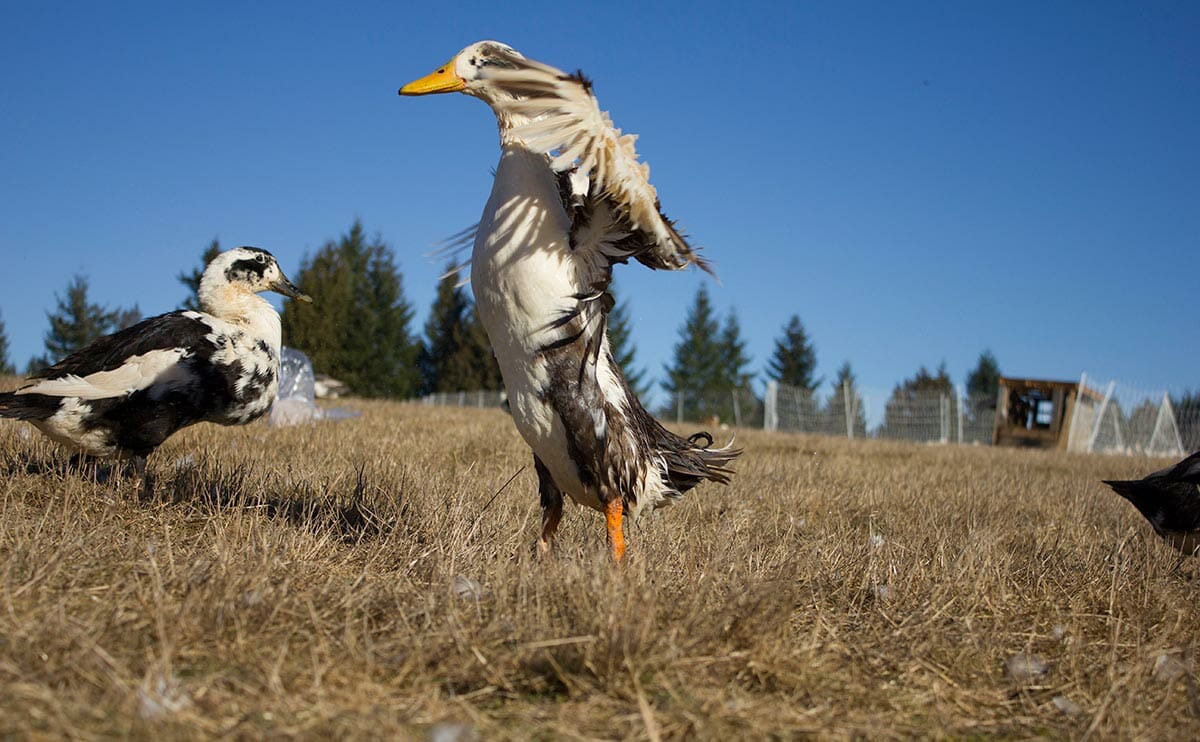 “Each month I was doubling my sales, and they were running out,” Brooks says. “I had to stop telling people about it, because I didn’t have anything to sell them.” She even had a distributor for Asian grocery stores offer to buy more than 1,000 duck eggs per week – far more than the 150 to 175 per week her 25 layers could handle.

When it comes to eggs, chickens have a near monopoly on the American market, so much so that the USDA does not collect data on sales of any kind of egg other than chicken eggs.

But John Metzer, who has been operating a large waterfowl hatchery in California since the 1970s, says that consumption of duck eggs in the U.S. has been inching upwards over the past 30 years and really taking off in the past three to four years. He sees two main trends in the duck business: A sharp increase both in the popularity of duck eggs and in the number of small farmers and hobbyists raising ducks on pasture and selling their meat and eggs locally.

Metzer says his sales of fresh duck eggs have gone up 10 percent per year since 2011. Sales of day-old ducklings in his two primary laying breeds, Golden 300 Hybrids and Great White Layers, have also increased 7 percent and 10 percent, respectively, per year since 2011. “We typically sell out for much of the year – in other words, we could have sold more,” he says.

Mike Badger, the director of the American Pastured Poultry Producers’ Association (APPPA) says, “What I see is anything duck increasing in demand.” Dave Holderread, who runs a waterfowl conservancy and hatchery in Oregon and wrote Storey’s Guide to Raising Ducks, agrees that demand for ducks and their products is on the rise. When he started raising ducks in the 1960s, Holderread says, most people didn’t know duck eggs were edible.

The rising demand for duck eggs has caught many farmers by surprise. Metzer says his sales of fresh duck eggs have gone up 10 percent per year since 2011.

The rising demand for duck eggs has caught many farmers by surprise.

Rachel Kornstein and Evan Gregoire got into ducks as a form of pest control: They bought a small flock to help with a snail and slug infestation in their urban garden. Eight years later, they’re the owners of Boondockers Farm, a 75-acre concern in Oregon, where they raise rare Ancona ducks.

“We’ve helped create the demand for the product,” Kornstein says. Trained as a chef herself, Kornstein approached local restaurants about buying duck eggs. Like Brooks, Kornstein struggles to meet the demand for the eggs despite producing around 18,000 eggs last year. Boondockers Farm also sells around 1,500 day-old ducklings per year to customers around the country – and they’ve sold out every year since they started the hatchery.

Once duck egg producers put in some preliminary work developing a market for their products, they seem to have no difficulties finding customers, Badger says. “People who know about food tend to seek out duck eggs.”

So who’s buying the eggs? There are three main, sometimes overlapping markets for duck eggs. The first is among chefs and foodies, especially those who bake. Duck eggs are somewhat larger than chicken eggs, with a yolk twice twice the size. The larger yolk gives duck eggs more fat and, as a result, a richer taste. Joshua McFadden, the executive chef at Ava Gene’s and Roman Candle Baking Company in Portland, Oregon describes duck eggs as a “more intense chicken egg.” He uses the eggs mostly for fresh pasta, mayonnaise or simply soft-boiled and crumbled over a salad. Serious bakers appreciate duck eggs for giving the final product a richer, more moist texture, especially in gluten-free baked goods.

Many farmers actually started raising ducks because of personal nutritional needs, and then found that there was a demand for duck products almost by accident.

Many farmers actually started raising ducks because of personal nutritional needs, and then found that there was a demand for duck products almost by accident. Brooks at Fork Creek Farm is allergic to chicken meat and started raising ducks primarily so that she would have access to poultry that wasn’t chicken.

Scott Tyson of 180 Degree Farm in Georgia started raising ducks when his son was diagnosed with a rare form of cancer at age four, and was advised to eat alkaline proteins – which include duck eggs, but not chicken eggs. Tyson didn’t expect to sell the duck eggs, but then a local baker found out he was raising ducks, and asked if she could buy some eggs. “It just kind of blew up on us,” Tyson said. Today, Tyson’s son is a healthy 11-year-old who is an inspiration to Tyson’s customers, many of whom seek out the farm’s products after being diagnosed with a serious illness.

What he had thought would be at most a very small, niche part of his farm turned into one of his primary markets, with Tyson now owning around 65 laying ducks and selling 10,500 duck eggs last year. He plans to almost double both numbers in 2014. Tyson says his profit margin is higher on duck eggs than on chicken eggs, because a laying duck eats the same amount of feed as a laying hen but produces a larger, more valuable egg. Many duck breeds are also more prolific layers: According to the American Livestock Conservancy, Campbell ducks lay up to 340 eggs per year and several other duck breeds can lay over 250 eggs per year, while the top-laying chicken breeds, Leghorns and Rhode Island Reds, top out at 300 and 250 eggs per year, respectively.

Lastly, there is a strong market for duck eggs, both fresh and salted, in Asian communities. Richard Chang, from Grand Asia Market in Raleigh, North Carolina explains that the store’s customers don’t consider duck eggs and chicken eggs interchangeable: They choose which type of egg to use based on the dish they are preparing. Grand Asia Market has always stocked duck eggs, but Chang says that they have recently become more difficult to source. “The demand is higher than the supply,” he says.

“It’s not as if ducks are going catch up to chickens,” Metzer admits. But the market for ducks eggs seems like it may be poised to break out of its shell.

I just inherited a 5 acre farm and think I want to give Duck farm a try. Any help would be greatly appreciated.

whee are you located. I am in dfw area. I am looking for to buy duck eggs to eat. can anyone direct me where to go.

I have a small duck farm and to make it bigger.please can you help me..