The Jacu bird has an excellent eye for coffee beans -- which makes its excrement some of the most expensive coffee in the world. 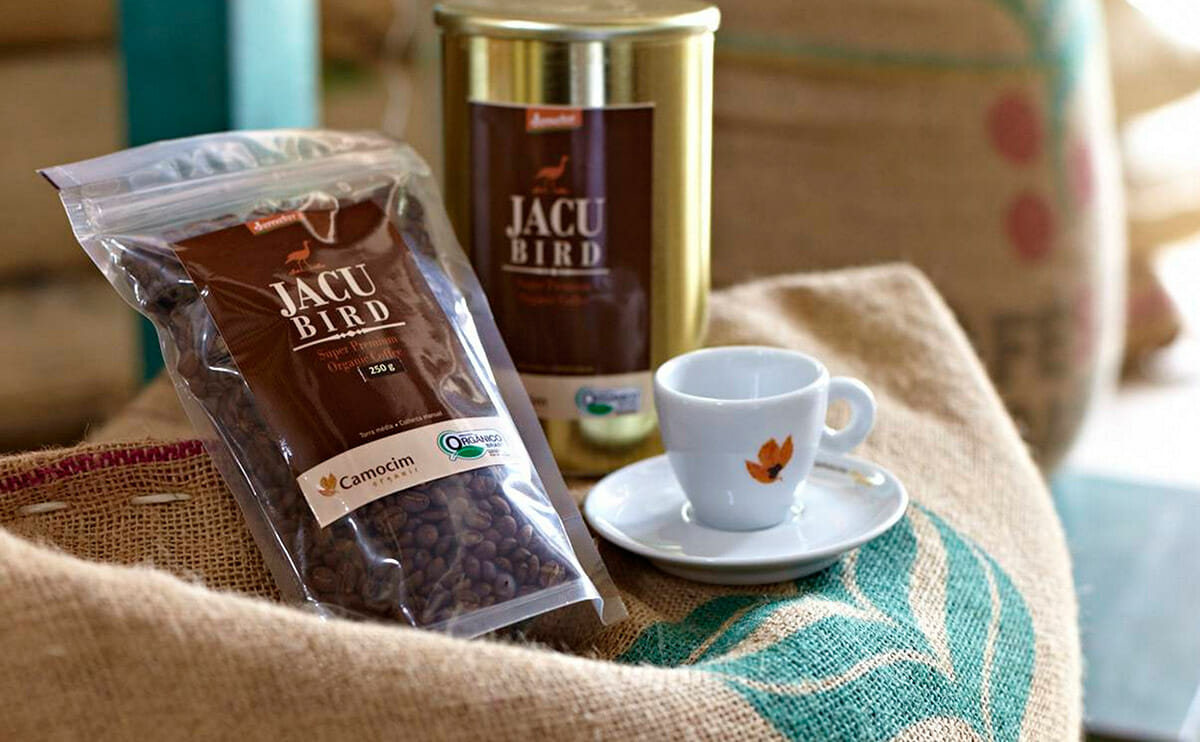 Arriving one morning to his fazenda at the foot of Espirito Santo’s mystical, monolithic mountain, Pedra Azul, he found the lush vegetation overrun with Jacu birds.

An endangered, pheasant-like bird, native to the Mata-Atlantica rainforest, the Jacu had no history of feeding on coffee cherries. Yet while the glistening, green slopes of neighboring plantations remained Jacu-free, the brilliant red mocha and yellow bourbon berries on Camocim’s 740-acre estate were disappearing by the dozen. “I sat in my office in despair,” recalls Henrique, “I even called the environmental police, but there was nothing they could do… and I couldn’t exactly kill them ”“ I’m organic!”

Sloper’s only explanation for the bird’s unprecedented invasion was the biodynamic methods he had begun introducing to the plantation over the previous 3 years.

2009 was an auspicious year. It marked Sloper’s first certified biodynamic harvest, 110 60-kilogram sacks, but it also heralded the arrival of the Jacu bird.

Biodynamic agriculture is a holistic system of agriculture developed by German philosopher Rudolph Steiner in the 1920’s, which attempts to make a farm work in sync with cosmic cycles, while regenerating the soil’s nutrients through a series of natural preparations that range from cow manure buried in the belly of the earth during winter to yarrow flowers fermented in a stag’s bladder and hung to dry from the branches of a tree.

Sloper’s first stumbled across biodynamics through a passion for wine, which led him to the vineyards of Napa Valley’s Araujo Estates and France’s Nicolas Joly, Steiner’s principal disciple and the world’s leading producer of bio-dynamic wine. Converts claim that the methods results not only in a more sustainable eco-system, but a purer product, where wine can be drunk by the bucket with a limited hangover ”“ the dream of every wine drinker.

While skeptics abound, for the Jacu bird, it made all the difference. Bio-dynamic principals include an agro-florestal approach in which maximum biodiversity is encouraged ”“ Camocim’s coffee nestles among over 100 different types of tree, from the flowering jabuticaba to banana bushes that shade the delicate cherries from the relentless sunshine before they fall to the ground, contributing to a rich carpet of organic matter. The result is a dream habitat for the Jacu, whose heavy build makes it as happy scurrying along the forest floor as it is in the air.

For Camocim’s nascent biodynamic crop, salvation lay in surfing. Growing up on the beaches of Rio, an early addiction to riding waves had led Sloper to the surf mecca of Indonesia, where between breaks he had discovered Kopi Luwak, an exotic coffee ingested by cat-like civets and harvested only after being plucked from the droppings.

‘The real challenge lay in convincing my coffee pickers that instead of berries, they needed to be hunting for bird-shit.’

“I realized I could try something similar with Camocim and the Jacu bird, but coming up with the idea was only half the battle,” says Sloper. “The real challenge lay in convincing my coffee pickers that instead of berries, they needed to be hunting for bird-shit.”

Sloper only succeeded by turning selection into treasure hunt, with workers spurred on to rummage around tree stumps, the Jacu’s “natural toilet,” by the promise of financial rewards. Workers would recieve an extra 100 reais (about $50 USD) for finding Jacu droppings.

“There was no other way to change the mind-set,” Sloper shrugs. Camocim’s process of production includes hand-picking and roasting each individual varietal of organic coffee cherry to ensure the very best quality and flavor — a costly, artisanal technique employed by a mere 1.1 percent of farmers in what is the world’s largest coffee producer.

The Jacu bird adds another dimension. After collection, each single bean must be extracted from the droppings by hand and washed before it can be de-husked from its protective membrane – hours and hours of additional labor by skilled workers.

The difference is striking, if you look at price. If a 60 kilo bag of your average super-market coffee retails at $200 in US dollars, Camocim Organics (the non-Jacu bird kind) tops the traditional market at $450.

But for the good shit from Jacu birds? Buyers are willing to pay big. A bag of the exotic Jacu bird averages $3,250 per 60 kilo bag, a direct reflection of both the pain-staking production and the Jacu bird’s own impeccable process of selection — something Sloper discovered by chance when Brazilian news channel O Globo Rural came to film a feature of the natural phenomenon.

‘I watched open-mouthed from my living room as the Jacu bird selected only the ripest berries, leaving over half the bunch, even those that looked perfect to the human eye.’

Although Henrique and his team had spent countless hours experimenting with every stage of the Jacu process, the one step they had missed was watching the inherently shy Jacu bird while it was feeding. Little did they know how important this stage would be. The program O Globo Rural aired early on a Sunday morning while Sloper was eating breakfast.

“I watched open-mouthed from my living room as the Jacu bird selected only the ripest berries, leaving over half the bunch, even those that looked perfect to the human eye.” It was a light bulb moment – Sloper realized that the bird’s natural selection process added an unprecedented dimension to the quality of the selection process — and consequently the taste of the coffee.

Sloper credits this natural selection process, along with the fact that the Jacu’s vegetarian diet and quick digestion means the beans aren’t contaminated by animal proteins and stomach acids (unlike the Indonesian civet), as the reason why the taste is so refined

So what’s it actually taste like? “It’s a unique, nutty flavor with nuances of sweet aniseed,” says Sloper. Camocim now roast and package their own beans to guarantee that purity isn’t diluted down the retail chain from poo to pot.

For this Brazilian grower, what would have been a potential pest instead became the opportunity for a new level in innovation when it comes to working in harmony with nature – and turning a small family business into a revolutionary international brand.