But growing food commercially to feed hundreds or thousands of people isn't cheap. Farming is expensive. Tractors cost tens of thousands of dollars, barns don't build themselves, and you can't grow marketing materials. Like any business, starting a farm from scratch takes resources. 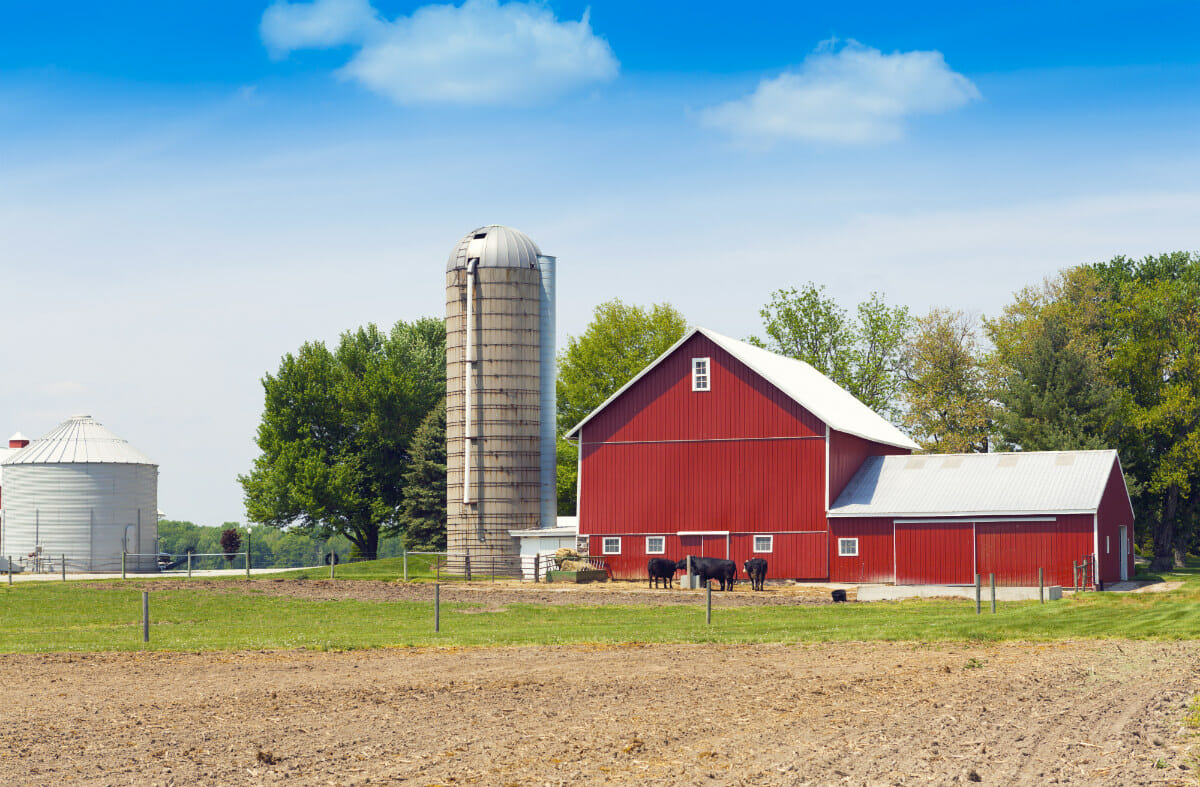 For new farmers, finding money to pay for those resources can be difficult, even impossible. Overall, farmers have far fewer lending options available to them compared to a brick and mortar business, according to young farmer advocates. Obtaining a loan from the USDA’s Farm Services Agency has historically required documented farming experience and lots of collateral. Ag loans from commercial banks or farm credit agencies are geared toward large farms growing soy or corn or raising chickens, and haven’t taken small farms seriously in the past. The USDA and commercial ag lenders have taken steps to address these issues, including the USDA’s microloan program, but there nonetheless remain numerous financial hurdles for start-up farmers.

In the vacuum created by these barriers, a few nonprofits and business people have stepped in to try and ensure a future for new farmers with creative new funding models.

Here are a few examples of how private wealth is being leveraged to save the small farm.

With support from foundations like Newman’s Own and Kaiser Permanente, nonprofit Wholesome Wave channels money from wealthy donors to promote consumption of fresh and local food by low-income Americans. Wholesome Wave’s highest profile initiative has been its Double Value Coupon Program that doubles the buying power of Supplemental Nutrition Assistance Program (SNAP) benefits at participating farmer markets. Wholesome Wave funds doubling programs at farmers markets in 26 states. Doubling allows a SNAP benefit user to buy $20 worth of local produce using $10 worth of their monthly benefit allotment. The goal, Wholesome Wave’s founders say, is to make healthy food accessible to everyone, making shopping at farmers markets a better deal. But doubling has also given a welcome economic boost to the livelihoods of hundreds of farmers nationwide.

In 2011, Wholesome Wave launched its Healthy Food Commerce Investments initiative to help farms, food hubs and other local food businesses solidify or expand their operations. Founding CEO Michel Nischan, a former executive chef at W Hotel in New York and a string of successful restaurants, cites a growing market for local and organic food that can’t be currently met by producers, a market that he says is undersupported by the government agencies, as the reason for starting the HFCI initiative. So far, Wholesome Wave has invested both time and money in three ventures: a food hub in Kentucky, another in Rhode Island, and a seafood distributor supporting small-scale fishermen in Massachusetts. “In all these cases, each one was having difficulties in getting traditional government and farm credit help,” says Nischan. “The private sector is stepping up.”

Though Wholesome Wave essentially performs the role of venture capital, Nischan says the organization works patiently, allowing the business to develop at a comfortable pace, offering low interest, long-term loans without the pressure to churn a quick profit. Whether it’s through business plan editing or marketing help, Nischan said he and his organization are comfortable, when necessary, with rolling up their sleeves and stewarding these fledgling operations. “The entrepreneur isn’t in this by himself,” Nischan says. The initiative operates like a mix of traditional financing and good old fashioned barn raising.

In an industrial agricultural system set up to feed billions of people and grow profit for shareholders, small-scale farmers don’t stand a chance, he says. When it comes to changing that system, Nischan says, “The wealthy are going to play an instrumental role.”

A decade ago, a former Atlanta, Ga. restaurateur named Steve Nygren began building Serenbe, a new type of housing development modeled as the antithesis of the suburban sprawl that envelopes the country’s bigger cities. On 1,000 acres just a 45-minute drive southwest of Atlanta, Nygren envisioned Serenbe as a renaissance for small town America, a walkable rural community with eco-friendly, naturally landscaped homes clustered like the English countryside.

Serenbe, essentially, is a bedroom community for environmentalists and locavores. At the center of Nygren’s housing development sits 20-plus acres devoted to farming. Each home’s backyard butts up against a field growing tomatoes, collards and squash. As Nygren told me in an interview last winter, people in Serenbe put on their shoes and head into the fields instead of opening the refrigerator when they get hungry. “It’s about getting back to their roots,” Nygren says. At Serenbe, a farm sits where a traditional developer may have wanted a golf course. Homeowners buy a C.S.A. share, and on top of weekly farmers markets and three farm-to-table restaurants in the community, that funding supports a small farm staff.

Nygren believes the Serenbe model is scalable to the rest of the country. Originally concerned with being a neighborhood of high quality of life and low carbon footprint, he thinks Serenbe-like developments can revitalize small towns throughout the U.S., rebooting small-scale agriculture in the process.

But Serenbe beckons only to those with money, Nygren readily admits. “It doesn’t have what you would call affordable housing,” he says. The lowest price home at Serenbe is $265,000. But Nygren says young and beginning farmers will flock to such a development because wealthy landowners will lease them acreages to start their operations. Nygren is in the early stages of setting up a cooperative that will match unused arable land with farmers, and purchase equipment that area farmers can share.

Preservation-minded landowners have historically donated land to trusts and conservancies to protect their acreages from degradation and development. Landowners receive a property tax reduction when they turn their land over to a trust, but according to Marissa Codey, conservation and agriculture program manager for the Columbia Land Conservancy in Hudson Valley, N.Y., more landowners want to see their land put to good use, not just protection, resulting in a boom of farmland lease programs, many run by land trusts like Codey’s. Nationwide, the Land Trust Alliance counts over 1,700 land trusts in operation. Ag programs like the Columbia Land Trust are most common in the Northeast, but are also popping up in other regions.

Since 2009, the Columbia Land Conservancy has matched 25 landowners with farmers, putting a total of 1,000 acres in the Hudson Valley area into production. A number of these landowners, Codey says, are New York City denizens who’ve bought large plots for second homes and desire to be involved in farming without getting their hands dirty. These soil-endowed non-farmers, though, sometimes don’t have a clear perception of what farming actually entails ”“ the smells, the sounds. So Codey says the conservancy holds workshops about agriculture to help landowners, who may or may not live on the land, discover “what they’re really getting into.”

Farmers, too, have their own misconceptions about the relationship, and it often concerns who pays for what. Codey says they make sure it’s clear which party is supposed to pay for fencing, barn repairs or road maintenance. “The most important thing is putting the farmer in the landlord’s shoes,” says Codey.

4. Fund Farmers to Improve Their Land

A major downside to land trust lease agreements are the short terms of the contracts and the framework’s inflexibility when it comes to making capital improvements on the farm, says National Young Farmers Coalition executive director Lindsey Shute.

Shute, who got her farming start through a land lease 10 year ago, still considers the increase in land trusts brokering these leases as very positive. “[Land trusts] play an important role because they know both the farmers and the landowners,” says Shute.

Shute would like to see land trusts purchase farmland from private individuals, then sell the acres to farmers or lease it for 99 years at an affordable rate, thus keeping land reasonably priced over time. Codey says buying land is a challenge for capital-strapped land trusts, though she thinks it’s a role that land trusts could play. “That kind of arrangement is ideal,” Codey says. “That way the land is not going to go anywhere.”

Shute and her husband are currently upgrading their farm. They expect to surpass $500,000 is sales next year, which puts them in a size regulated under the new Food Safety Modernization Act that’s expected to go into effect next year. This means they’re building a packinghouse to meet the new standards. Add those construction costs to their mortgage and essential farm equipment they’re still paying off, and the Shutes have a substantial financial burden to keep up with. But when determining how to fund the farm’s expansion, Shute says they turned to a traditional farm credit agency, Farm Credit East, which was willing to work with their small organic farm, though she recognized such a progressive agency is rare.

Shute says that the FSA and farm credit agencies are still the future for funding small farms, which is why Shute lobbies Congress to further fund the FSA. There’s a knowledge lag about sustainable agriculture among traditional farm credit agencies, Shute says. They fear lending to small farms after watching so many farmers lose land in the 1980s, she says. But she believes it’s nothing that can’t be undone with a little professional development. Those institutions, she says, are safer investing partners for farmers. “Now’s not the time to give up on the FSA and farm credit,” Shute says. “They have so much potential.”