Hacking for a Better Meat System

The Hack/Meat conference saw tech whizzes, butchers and restauranteurs put their brain-muscles to work to ease butcher-troubles, improve quality and satisfy all. 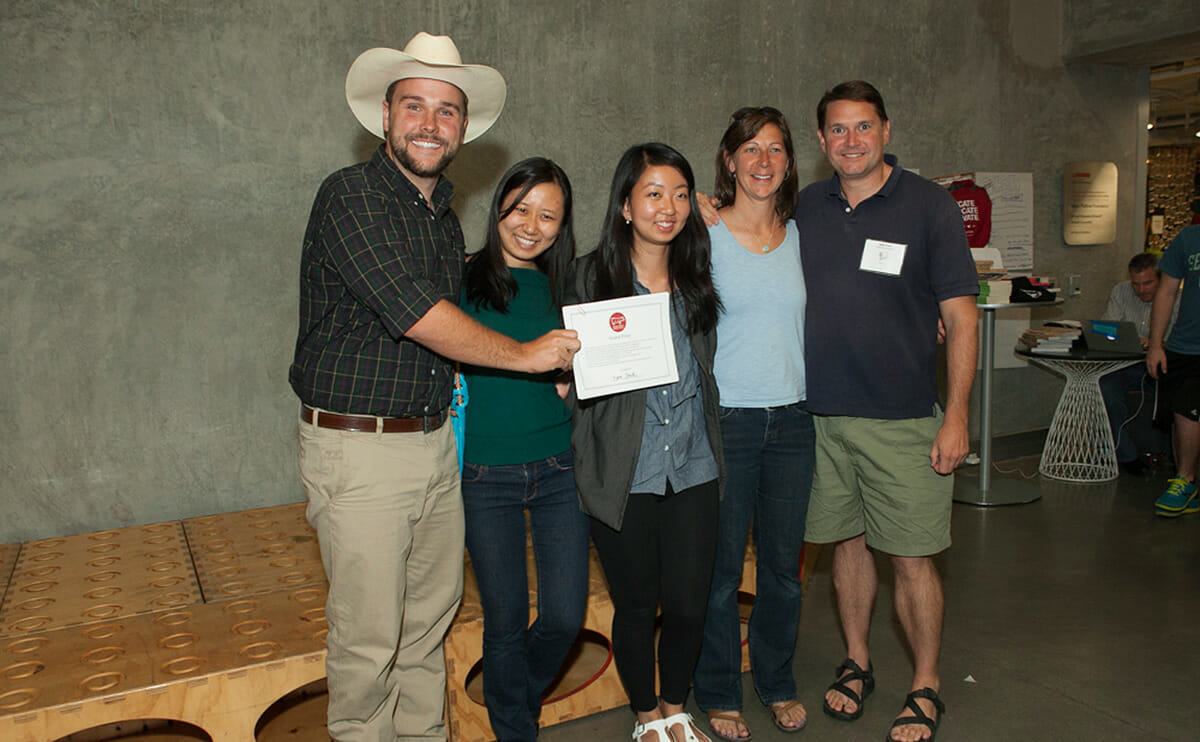 The New York-based food innovation network Food+Tech Connect believes technology could solve problems that have long bedeviled farmers and consumers. Perhaps tech could create more efficient distribution systems for small farmers to meet growing demand? Maybe it could ease the process of buying grassfed meat in bulk? Or could a new app or website even help boost the number of sustainable meat dishes on restaurant menus? Just this past weekend, the group’s Hack//Meat event asked participants to tackle issues specific to the meat industry.

Hack//Meat is more of a group brainstorming session than a gladiatorial race to build the best app and prototype it. The hope is teams that participate in one of the hackathon’s six challenges wouldn’t just be muscling to create a good mock-up ”“ they’d also consider policy changes to make meat more accessible and sustainable. The big-picture stakes ”“ or “steaks” ”“ would hopefully outweigh the $125,000 in prizes.

“There will be a range of ideas,” Food+Tech Connect CEO Danielle Gould said on Saturday night. She was sitting outside Stanford University’s Institute of Design while groups of fledgling programmers scattered around her, pecking at their keyboards. She pointed out that the inaugural Hack//Meat in New York City produced a few apps that were already live and demonstrable by the end of the weekend. But it also generated several well-intentioned, if inchoate policy ideas, and a few blueprints for viable non-profits. The prize structure ”“ which rewards “social good” and strong business models as well as product design ”“ helps encourage that type of variety.

The second iteration of Hack//Meat took place this weekend at Stanford, right in the armpit of Silicon Valley. It brought together groups of “steakholders” ”“ i.e., people and businesses who could benefit from a better meat system ”“ with dozens of bright-eyed technologists, some of whom had little-to-no experience coding software or building web applications. (At Hack//Meat, the term “technologist” is tossed around loosely.) We traveled to Stanford campus on Saturday to talk to some of the competitors about their ideas, one day before they had to present an elevator pitch to the judges. Here’s a sampling of what we found:

This group of six chose a challenge from the American Grassfed Association to make it easier for consumers and restaurateurs to buy grassfed meat in bulk, rather than purchasing individual steaks at a supermarket. Right now that process is cumbersome and confusing, said Andy Katzman, who works on Platform Partnerships at Facebook, because it involves three different parties ”“ producer, processor, and consumer ”“ who all speak different languages.

Since most customers aren’t conversant in roasts, steaks, flanks, skirts, ribs, and brisket, it would be behoove them to have a web translator to parse through all those terms, and mediate the transaction. Ergo, the STEERing Committee web portal, where customers would fill out a detailed questionnaire about the type and quantity of meat they want, and what they intend to do with it. Participating farmers would have individual “webstands” where they could receive customer queries and process the orders, without having to do the legwork of translating meat-speak into dinner table parlance.

This group still had a couple competing ideas by the time its members sat down to dinner, which frustrated hackathon mentor Daniel Stillman enough that he started drawing venn diagrams on a tablecloth (which fortunately was made of butcher paper). The majority was pushing for a Food Network-inspired TV series that would encourage people to “embrace the flavors of grassfed meat,” and meet a challenge posed by the James Beard Association.

“We’re solving the problem [of butchering] with an online appointment system. It’s like a Google calendar for killing.”

Inspired by a Niche Meat Processors Assistance Network (NMPAN) challenge to improve communication between farmers and slaughterhouses, this group opted to create a Microsoft Outlook-style calendar that would compile consumer requests on a waitlist, and match them with farmers who had cattle available to kill. That would solve the problem of heavy demand in the summer and sparse orders in the winter, said Dmitry Golyshev, a group member who co-founded an interactive cooking company that offers classes via Skype.

Golyshev said that since ranchers and processors handle most of their orders over the phone right now, they have a hard time managing supply and demand ”“ a processor has to keep dialing numbers until he finds a ranch with the capacity to fill his order, and a rancher has few ways to solicit business when his cattle are ready for the chopping block.

“We’re solving the problem [of butchering] with an online appointment system.” Golshyev’s eyes twinkled. “It’s like a Google calendar for killing.”

Although this four-person team was both name- and engineer-bereft as of Saturday night, its members — all refugees from the marketing or restaurateur world — had an amazing knack for spitting out catchy jingles. Like The Thundercats, they’d been inspired by the James Beard quest to “embrace” grassfed meat and give it the same cachet as, say, a very fine wine.

Jason Crayne, a chef for Google’s cafeteria contractor, served as the group’s de facto spokesman. He said they wanted to build a subscription website for chefs with detailed descriptions of various grassfed meat cuts, which could all be transferred over to menus.

“It’s a professional site that celebrates meat with the same specificity that wine is celebrated,” Crayne said, adding that it would give chefs the confidence to include sustainable, grassfed meats on their menus, even if the raw ingredients cost more and seem harder to prepare. That in turn would drive the industry toward a more sustainable model, he concluded. Crayne and his teammates foresee a day when grassfed meat will have so much cachet that Americans will think it uncouth to get their meat from feedlots.

What these guys lacked in programming skills they made up for in flair – they wound up snagging the award for best design.

Several people decided to go it alone at Hack//Meat, among them Max Haines-Stiles, a mobile app developer who didn’t feel like any of the team discussions were going his way. After canvassing a group of farmers and ranchers, Haines-Stiles learned they had no way to efficiently sell meat to consumers ”“ right now, most of that business runs by word of mouth, he said. Haines-Stilles thought he could address that problem by creating a mobile site to where customers could place orders, and farmers could answer them, using a model that emulates community-supported agriculture (CSA).

Haines-Stiles’ “CSA for Meat” would provide farmers with enough capital at the beginning of the year to manage their operations ”“ so, say, a farmer who wanted to purchase cold storage for slaughtered hogs would know up front whether he had enough money to do that. It would also give them the option to choose their own distribution channels, so they could sell directly from the farm if it didn’t make sense to drive out to the local farmers’ market every week.

Haines-Stiles wasn’t the only contender who latched onto the CSA idea; a similarly-themed group, Cowshare With Us, won the Best Business award.

Twenty-seven-year-old Pescadero poultry rancher Kevin Watt might have been a fish out of water at any other hackathon. At this one, he was a veritable Larry Page ”“ his team took home the blue ribbon. His group dazzled everyone with a sharing economy service called FarmStacker that connects young farmers to under-used arable land ”“ or, in Watt’s words, “cooperative opportunities that are going unnoticed.”

Watt’s farm, the Early Bird Ranch, was spawned from one such opportunity. He and his wife Shae Lynn sublet acreage from a sustainable cattle farm called Left Coast Grassfed, whose owners only need the pasture for part of the year. After the cattle finish grazing, Watt and Shae Lynn let their chickens and turkeys run loose on the grass and in the surrounding forest. The birds help fertilize the soil, which in turn benefits the cattle. Watt believes such symbiotic relationships could happen on other ranches if farmers and landowners would cotton to the idea. He envisioned FarmStacker as part educational tool, part third-party mediator, and part vetting service ”“ akin to AirBnB, he says, but run by humans, rather than a web portal. Ideally, its staff would help unlock cheap land for farmers while providing landowners with an extra revenue stream.

FarmStacker’s five-person team included a wedding planner, a business school student, a rancher from Left Coast, and one start-up vet to indoctrinate everyone else in the art of pitching. A combination of enthusiasm and steadfast intentions helped it clinch the win.

Among the other ideas we saw at this weekend’s Hack//Meat was a Google Maps-ish data tracking system that would locate fertile farmland that’s being squandered for other purposes, and attempt to “unlock” it. (“Unlock,” in this case, means figure out who owns the deed and encouraging him or her to sell.) We’re sure that many of these projects could come to fruition in the real world, given a little seed money and a dedicated team behind them.

Gould says at least two teams from the New York event have continued developing their ideas. She hopes they’ll eventually go to market, as would a star prototype from any conventional hackathon. In this case, though, the social ramifications could be much greater.

Best Use of Tech: Agent Yum, a Google Glass label decoder that provides sick cow graphics to correlate with the GMO and antibiotic content in a piece of meat.

Best Business: Cowshare With Us, the aforementioned CSA for grassfed beef.