The criminal misdemeanor trial of Wisconsin raw milk farmer Vernon Hershberger that drew national media attention ended more than two weeks ago, but Michele Bollfrass-Hopp, one of the jurors in the case, has been unable to get it out of her mind. 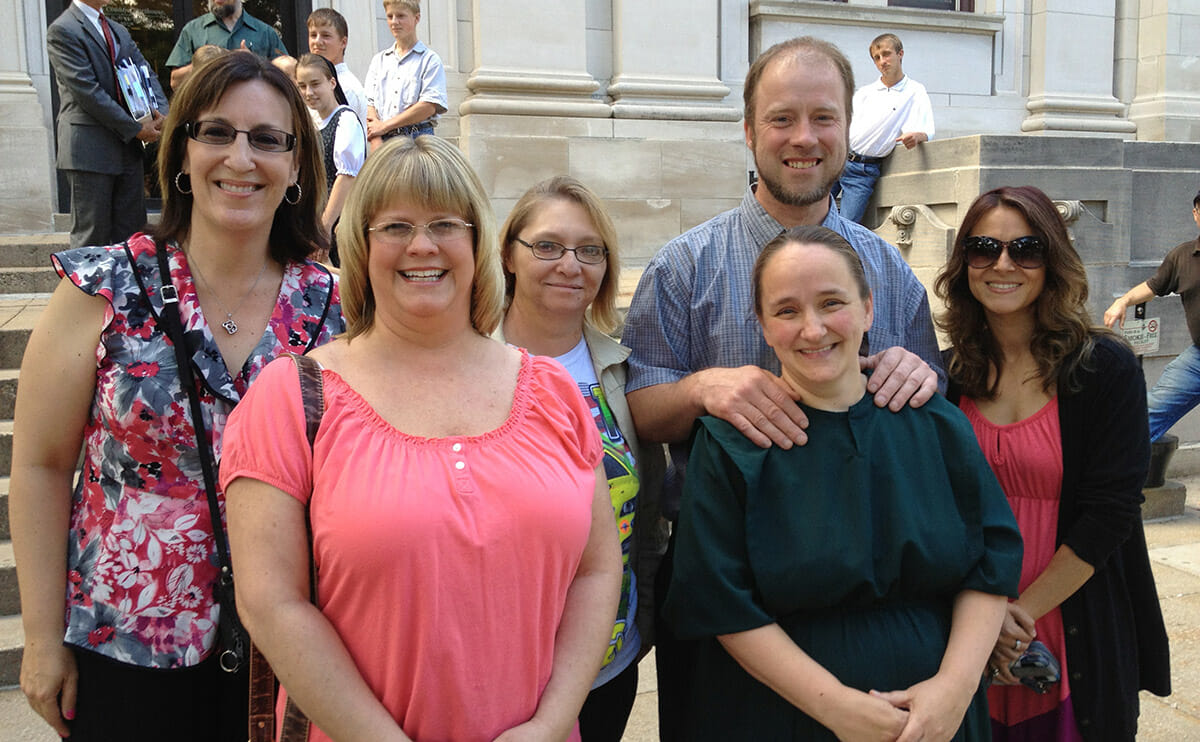 (Above: Members of the jury pose with farmer Vernon Hershberger and his wife, Erma, outside of court.)

The criminal misdemeanor trial of Wisconsin raw milk farmer Vernon Hershberger that drew national media attention ended more than two weeks ago, but Michele Bollfrass-Hopp, one of the jurors in the case, has been unable to get it out of her mind.

In the case, Vernon Hershberger, a 41-year-old Amish farmer, was put on trial for violating Wisconsin’s dairy and food licensing laws by selling unpasteurized milk. Cases in which farmers are prosecuted for selling unlicensed food for private use are rare. In one other case, last September, a jury of six people acquitted Minnesota farmer Alvin Schlangen on criminal misdemeanor charges similar to those facing Hershberger.

Bollfrass-Hopp has been “haunted,” by the proceedings, she said, so much so that she has spent hours since the trial reading up about natural, raw, and nutrient-dense foods of the type Hershberger sells to about 200 members of a private food club in Loganville, WI.

“I have never been an organic food person, the whole raw milk thing has never been on my radar,” said the 51-year-old manager of a local telecommunications company. After the trial ended, she was “up till four in the morning reading about all this.”

As a result of her reading, she also became deeply troubled by what she now feels was the unnecessary withholding of relevant information from the jury – information that she says would likely have led the jury to acquit Hershberger of the single criminal count of which he was convicted. Hershberger faced a sentencing hearing Thursday at the Baraboo courthouse where he was tried, with a maximum penalty of a year in jail and a $10,000 fine.

Hershberger was charged with four counts: three counts of not having appropriate licenses, and one count of violating a holding order. The jurors voted to acquit Hershberger of the licensing charges, but since Hershberger admitted during the trial to violating the holding order (which was issued to prevent him from distributing, or even moving, his products) they convicted him on the count. What they didn’t know was that the reason for issuing the holding order was because of Hershberger’s failure to have retail and dairy permits the DATCP said were required – the very charges they acquitted him of.

The members of the Hershberger jury were only allowed by the judge to see a redacted version of the hold order issued to Hershberger during a search of his farm and store by state agriculture and public health authorities on June 2, 2010; blotted out were the causes for the hold order.

If they had been able to see the whole document, some members of the jury believe they would have acquitted on all four counts.

Bollfrass-Hopp decided to take matters in to her own hands: she wrote the state judge overseeing the case, Guy Reynolds, expressing her objection to the information blackout. She wrote, in part: “In my opinion, our jury instructions required us to find Mr. Hershberger guilty of violating a food holding order because we were directed to determine whether a holding order had been issued and whether it had been violated – two events that Mr. Hershberger admitted to during his testimony. I believe that our three not guilty verdicts support the fact that the Wisconsin Department of Agriculture, Trade and Consumer Protection should never have issued a food holding order to Mr. Hershberger.”

The judge said it was the first time in more than a dozen years on the bench that he had been contacted by jurors seeking leniency or acquittal for the man they had convicted.

She also decided to take off from work to attend the sentencing hearing Thursday. She wanted to see if the judge would mention her letter, and she wanted to meet Hershberger and offer him support.

Not only did Judge Reynolds mention the letter, he imposed a fine much smaller than the maximum: $1,000 plus $513 in court costs. And it wasn’t the only letter he received: Judge Reynolds said he received letters from three jurors in support of the farmer and that it was the first time in more than a dozen years on the bench that he had been contacted by jurors seeking leniency or acquittal for the man they had convicted.

Bollfrass-Hopp was joined at the hearing by three other jurors and an alternate. After the hearing, they mingled with Hershberger and his family, congratulating him on the relatively small fine.

The jurors had bonded personally and over the two weeks since the trial and become increasingly upset about the single guilty verdict they rendered. Bollfrass-Hopp said her letter was part of “a juror revolt” that had built up in the days following their decision, arrived at about 1 a.m. on May 25, after about four hours of deliberation. “The holding order was applied in a way that wasn’t right,” she said.

The jury foreman, Paul Freitag, was more forceful. An installer for a cable television company, Freitag said he decided to leave the letter writing to Bollfrass-Hopp because he feared his own letter might be harsher than hers, and seen as “criticizing the judge too much.” Freitag said he was upset that jurors “didn’t have the truth” and that “if we could have ruled on whether that was a legitimate hold order, we would probably have found him innocent.”

Judge Reynolds had ruled in a pretrial hearing against allowing the jury to see the full hold order in an effort to narrow the trial’s focus. He said more than once he didn’t want the jury ruling on DATCP’s authority to issue hold orders or licenses, nor on whether sales of raw milk should be allowed (they are prohibited in Wisconsin, except on an “incidental” basis).

As most juries do, the jurors of the Hershberger trial compromised. Freitag wanted to acquit on all counts; Robb Porubsky, a plant manager at a metal fabric company, was holding out for conviction on a charge that would penalize Hershberger for not having a retail license. Eventually Porubsky was persuaded to abandon his position for conviction on the retail license charge (“Hershberger was in a gray area,” Porubsky decided) in exchange for Freitag giving up his lone vote for acquittal on the hold order. Everyone was at peace, until they got home and began reading in articles about the reasons the hold order had been issued to Hershberger.

Aside from leniency for Hershberger, there have been a few other unexpected outcomes from the trial. Porubsky has been motivated to start growing his own corn and soybeans. And Freitag and Bolfrass-Hopp, along with two other jurors who attended the hearing said they hope to visit Hershberger’s farm before long, and possibly sign up as members so they can try some of the raw milk they spent so much time in court learning about.