Harman Johar, a recent graduate of the University of Georgia Athens, and just a regula guy -- except he has a few extra thousand roommates. And he just scored $2 million to begin his organic bug business. 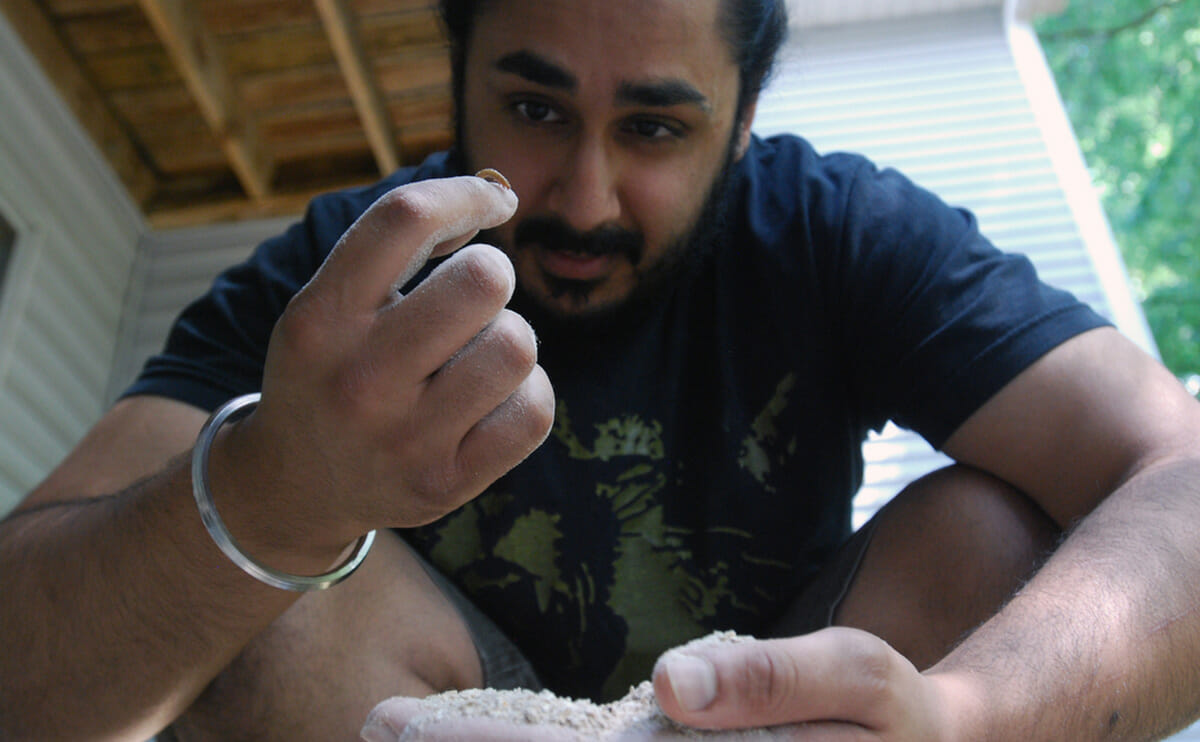 Anyone who’s braved the apartment of a college-aged male will recognize this scene: video game controllers strewn across the carpet; juice glasses left out on the coffee table; “Family Guy” posters pinned to the wall.

This townhome mess belongs to Harman Johar, a recent graduate of the University of Georgia Athens, and his roommates, some of whom are still finishing up classes in summer school.

They’re just a bunch of dudes enjoying their youth – nothing out of the ordinary – except that Johar houses a few thousand extra roommates at a time in his closet, cooks them, freezes them and then eats them.

“If I don’t provide them with enough moisture, they’ll cannibalize each other,” Johar says, pulling out a 10-gallon underbed storage box filled with meal worms, crawling through and feeding off organic oats, from his closet. Through his academic career, Johar “farmed” crickets and mealworms using a D.I.Y. set-up at first based solely in his college apartment bedroom. The company he created to sell the critters, World Entomophagy, has since rented out storage space to accommodate an increase in business. But his closet has remained his temporary research and development facility where he tests variables in the bug rearing process.

In the media barrage that followed the Food and Agriculture Organization’s recommendation that we all eat bugs, one question mostly remained unanswered as we all squirmed at the thought of eating grasshopper tacos: if Western cultures take up entomophagy, as insect eating is called, where will all the bugs come from?

No standards for organic bug farming currently exist, but Johar’s insects grow to market size by feeding off organic oats instead of conventional grains which might have been sprayed with pesticides. Humane insect slaughter includes dropping the temperature on the critters, who essentially fall asleep before they die.

Internet searches turn up a number of domestic insect producers that grow bugs for pet consumption, and there are several businesses that sell bugs from Thailand and other places. But the background of those bugs are harder to verify. A restaurant or individual can simply email Johar, who’ll bag up a half pound of roasted crickets, stuff them in a trade paperback-sized box and send them off in the mail.

Johar’s living room may be a mess, but with a double major in biotechnology and entomology, his scientific practice is anything but. Sure, he had to fend off house party drunks who wanted to see the bugs, had to hide the operation from potentially nosey repairmen and told his landlords he sold books on eBay to explain the piles of boxes he regularly stuck in the mailbox. But he’s rather sober and methodical about the manner in which his bugs live and die. As mealworms grew from eggs into larvae, which is the stage they’re best consumed in, they live in a sealed, climate-controlled environment that Johar built in to a regular old clothes closet. He didn’t want to share his trade secrets, but the contraption involves a humidifier and an air cooling unit. He tests the nutrient content of everything he raises and swears his bugs are cleaner and safer than anything foraged.

Anyway, now that he’s graduated, such sneakiness is in the past. And World Entomophagy is about to move into digs way fancier than a closet: they’re scaling up to a $2 million facility in Santa Cruz, Calif paid for by angel investors and venture capital. With the additional funds, Johar’s company will further meet the expanding demands of restaurants, educational ventures like Tiny Farms and value-added bug products like the Chapul energy bar, all of which are World Entomophagy customers.

Soon, the only bug you’ll find in Johar’s apartment may be the occasional roach.

Pictured above: Entrepreneur Harman Johar shows off some of his tiny “livestock.” Photos by Andre Gallant

The mealworms is a really big business, now, a lot of people buy meal worms for their chickens, birds, ducks and much more pets, this product have a very high protein, so it’s excellent for all pets. I always buy the dried mealworms from this website: https://atbuz.com/dried-mealworms/