How Onions Became a Staple On My Family’s Seder Plate

Every spring, my family gathers around our Passover table, which isn’t complete without a few raw onions. 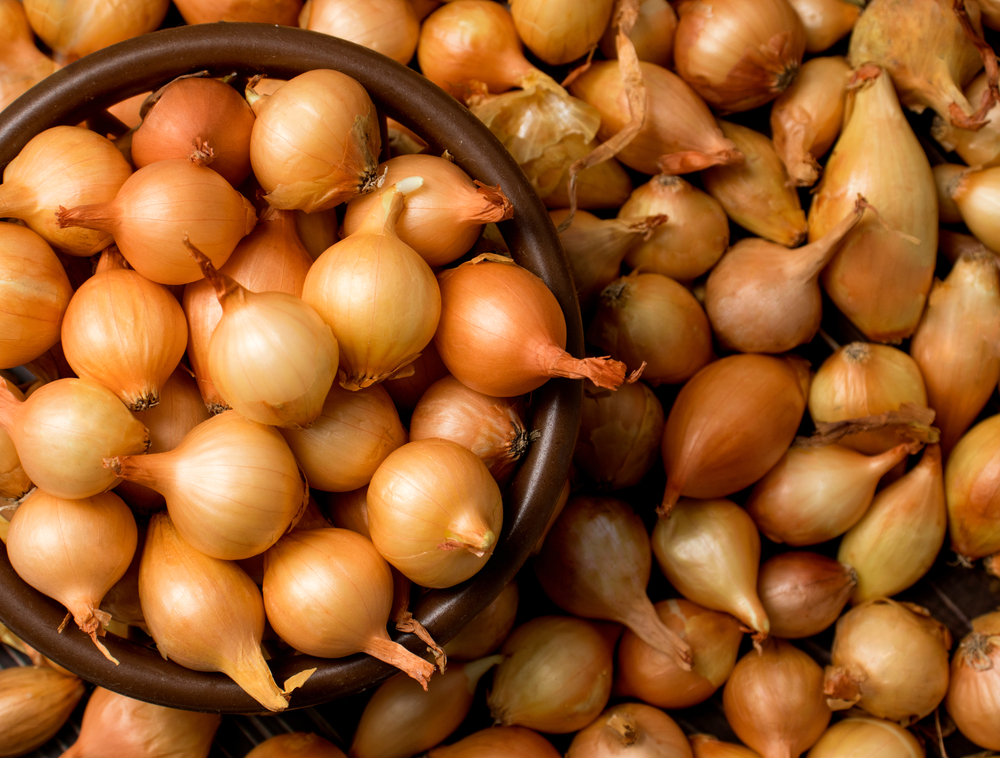 Like most Jewish families, mine has spent years, decades even, crafting our Passover seders. Each time we meet, a new tradition gets folded into the script, and we rejoice in revisiting it for years to come. We’ve included inside jokes, favorite foods, even misheard song lyrics into our celebration. We joyfully cry out the bridge in the L’fichakh (a psalm) as a tribute to my aunts. The grandchildren have nursed cuts and bruises in our yearly quest to find the afikomen. For years, we served pepper steak, a dish no one ate, because my father once innocently asked if it would be there. The serving plate ended up on the table in front of Dad every year after that.

Our Passover seder is uniquely ours, full of bits of family ephemera, accumulated over lifetimes. Over the years, our celebration has morphed from an hours-long dinner to a speedy 45-minute brunch. We’ve moved from my Baba’s old house, where we would pack 50 people around an ever-expanding table. There were about 20 leaves for that table in the closet, and I would shuffle back and forth with my cousins filling it in as my uncle turned the crank on the underside that transformed the heavy wooden behemoth into a true marvel of woodworking. In recent years, we plop on the floor of my aunt’s living room instead, eschewing the table altogether. 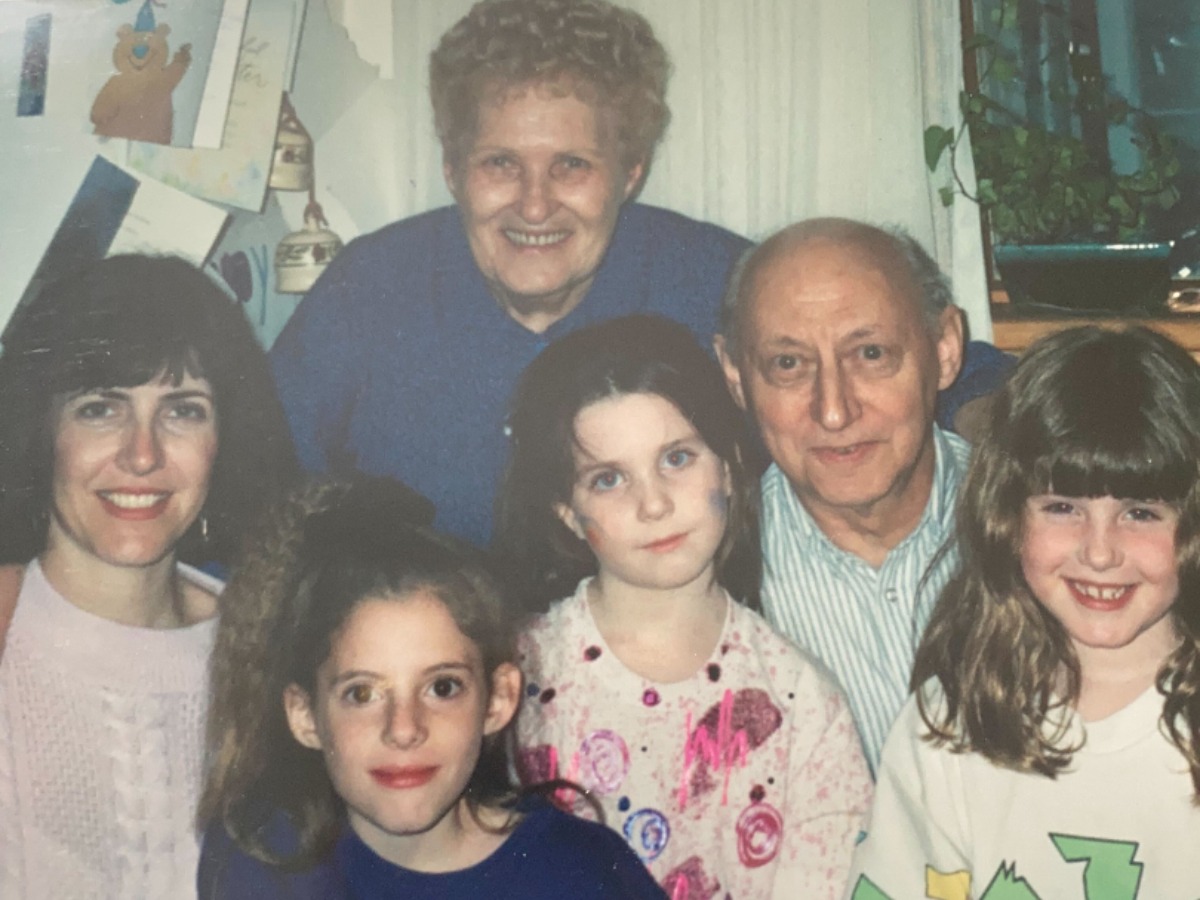 The author, center, with two of her cousins, aunt, uncle and Baba.

Perhaps most important in our Passover celebration, and one of our longest held traditions, is the onion. Including the onions in our ritual is a reminder of how crucial they were to our family. Without onions, none of us would be here.

The traditional Passover seder is a dinner with a fairly rigid agenda. The word seder translates to “order,” so timing is crucial to each part of the meal. Everything is structured: when you say a prayer, when you eat a piece of matzah, when you sing or light candles or take a drink of wine. There’s a specificity to the proceedings, because you’re telling a story—that of the Jews’ exodus from slavery in Egypt.

Part of that retelling involves the seder plate, a centerpiece of the seder. There are five key items on the seder plate, each with a specific meaning. The karpas is the vegetable offering, which signals the arrival of spring and the freedom the Jews found after escaping their bondage. During dinner, the karpas is dipped in saltwater before it’s eaten, to symbolize the tears shed before the Jews fled slavery. While karpas can be any vegetable, it’s generally parsley or lettuce—really, anything green. But for my family, it’s an onion. A raw, sliced, bring-you-to-tears onion.

My grandmother, Freeda Baron, was born in 1921 on a small farm in Edenbridge, Saskatchewan. It was one of Canada’s little-known Jewish farming settlements, and my great-grandparents helped to establish the community there after they emigrated from Europe. While they found some success in farming, it was a hard life. Baba grew up during the height of the Depression and learned to scrimp and save anything useful. The farm was bountiful during the summer, but the prairie winters were especially harsh and long. When Passover rolled around in the early spring, Baba and her siblings didn’t have any green vegetables to contribute to the seder plate. Nothing green had sprouted yet; the ground was often still frozen in places, and spring weather in Saskatchewan was unpredictable. So, they turned to the one vegetable they did have: onions. My Baba grew up dipping onions into saltwater during her seders, and we still do the same, long after our family moved off the farm. 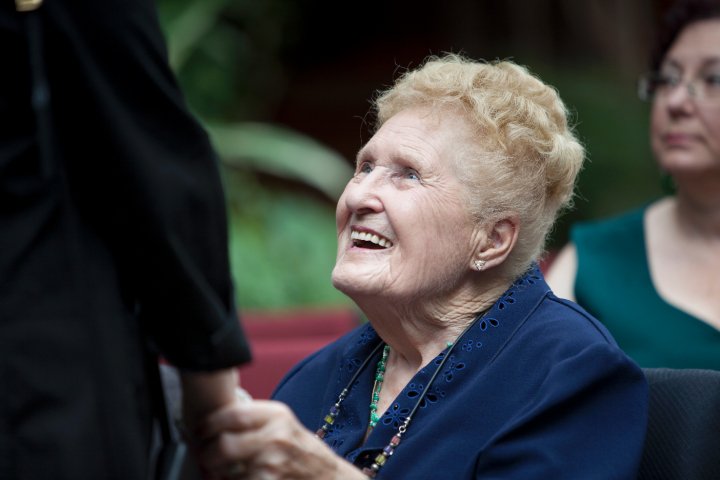 [RELATED: Manischewitz: The Great Story of a Not-So-Great Wine]

None of us is a farmer now. I might be the closest we’ve got, writing about agriculture for this very magazine. But, each year, we’re reminded of our direct connection to that farm in Edenbridge. That slice of onion is a reminder of where our family has been and all the work our matriarchs did to bring us forward from that point.

This year, for the third year in a row, I’ll be logging on to Zoom for our virtual seder. Even in the face of COVID-19, our traditions persist. I’ll watch each little pixelated box on the screen fill up with the faces of my family members, spread out in their homes across the world. We’ll sing and laugh and tell jokes. And when it comes time, we’ll each carefully dip our onion slices into the prepared saltwater and think of home.

Love this!
Thank you!!

This article is being copied to https://proagriculture.in :stop that guy, he is coping your articles plus others’ articles

I prefer baked garlic on the grill, challot with a steak, red onion in salads, and pickled red onion on burgers. Yellow onions with sauce and onion peel for Easter eggs