Manischewitz wine may be bad, but the history is excellent. 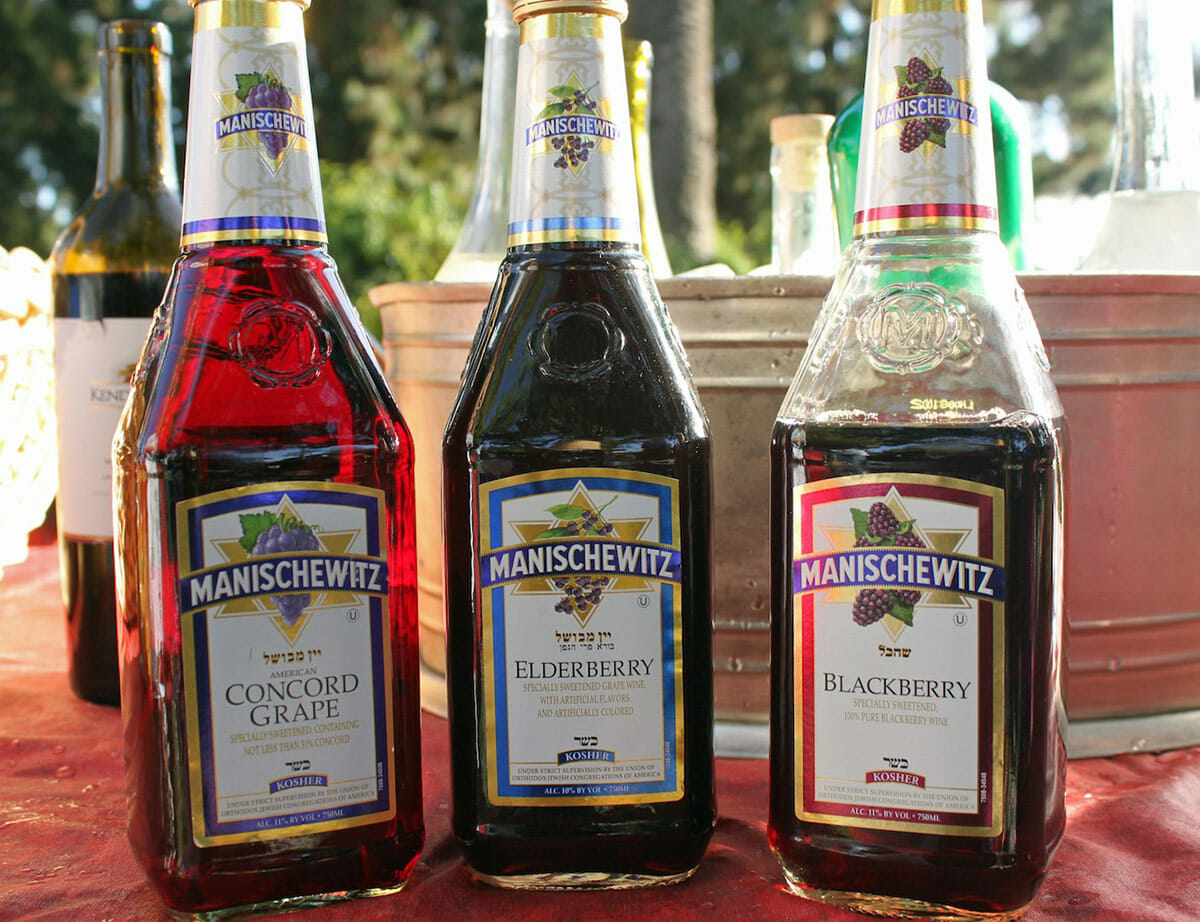 Next, a clarification for those not in the know. Manischewitz is not just a wine, but rather the name of the company that cornered the market on all foodstuffs kosher. Once settled in Cincinnati, Manischewitz made his initial fortunes in matzo, specifically by building a mechanized gas oven that allowed for large-scale production. Fun fact: Manischewitz is responsible for matzo being square, which he thought better for packaging and shipping; prior to his mechanized revolution, the cracker was round and produced in small artisanal batches.

The Manischewitz company got into the wine business in 1947, lending its name to a collection of sweet kosher wines being produced by the Monarch Wine Co. Monarch, FYI, was hip to Brooklyn’s appeals decades before the rest of us, producing its wines in Bush Terminal, now known as Industry City.

So why is the wine so damn sweet, anyway? “The style was created in the early part of the period of heavy Jewish immigration from Eastern Europe to East Coast cities, especially New York,” explains Sandy Block, Master of Wine, who diplomatically adds that he hasn’t had it “in a while.” The only locally available grape at the time was the hearty Concord, grown in upstate New York and known, if not exactly revered, for its musty odor and sour juice. (For context, this is the varietal used to make grape jelly. Not exactly a Cabernet Franc.). So home vintners added sugar, and the sweet kosher standard was born.

Not everyone partakes in the wine, but pretty much anyone born before 1980 knows its silly slogan, “Man-oh-Manischewitz!” How did the indelible catchphrase come about? Not via Michael Ginsberg, who, “Mad Men” devotees will recall, blew the Manischewitz account during his early descent-into-madness days. The Joseph Jacobs Agency came up with the ingrained tag, so catchy that Apollo 17 astronaut Gene Cernan blurted it out during his 1973 moonwalk. The company also employed the pitch services of one Sammy Davis Jr., who uttered the phrase in both radio and TV ads for years; alas, Davis lost the gig after Linda Lovelace revealed in her memoir that she’d once joined the man in a foursome at the Playboy Mansion. Fodder for the Seder this year!

Manischewitz is responsible for matzo being square, which he thought better for packaging and shipping.

It hasn’t been all wine and honey for the company. In 1990, the Justice Department accused Manischewitz of conspiring to fix matzo prices, eventually leveling a $1 million fine. The tale is straight out of a “Sopranos” B-story: In 1981, Manischewitz’s general sales manager secretly met up with managers from competitors Horowitz Bros. and Margareten at a Lower East Side kosher dairy; there they agreed to fix matzo prices for the next five Passover seasons. (Anyone who’s paid 20 bucks for a box of matzo might argue that the passover profiteering hasn’t exactly gone away.)

Oh, and here’s one more bit of intrigue: For some, the wine isn’t actually kosher. The version you see on the shelves year-round is sweetened with (shudder) corn syrup; corn is a kitniyot, a grain or legume, and cannot be consumed during Passover by those following traditional Ashkenazi laws and customs. Lest there be any confusion, look for the bottle labeled “Kosher for Passover,” which is made with cane sugar and is completely kosher in all senses of the phrase.

Ed. Note: This story initially stated that Ashkenazi customs prohibit any legume consumption. This prohibition is only in effect during Passover. Also kitniyot was listed as legumes, when it is actually both grains and legumes.