Here’s why scientists are worried. 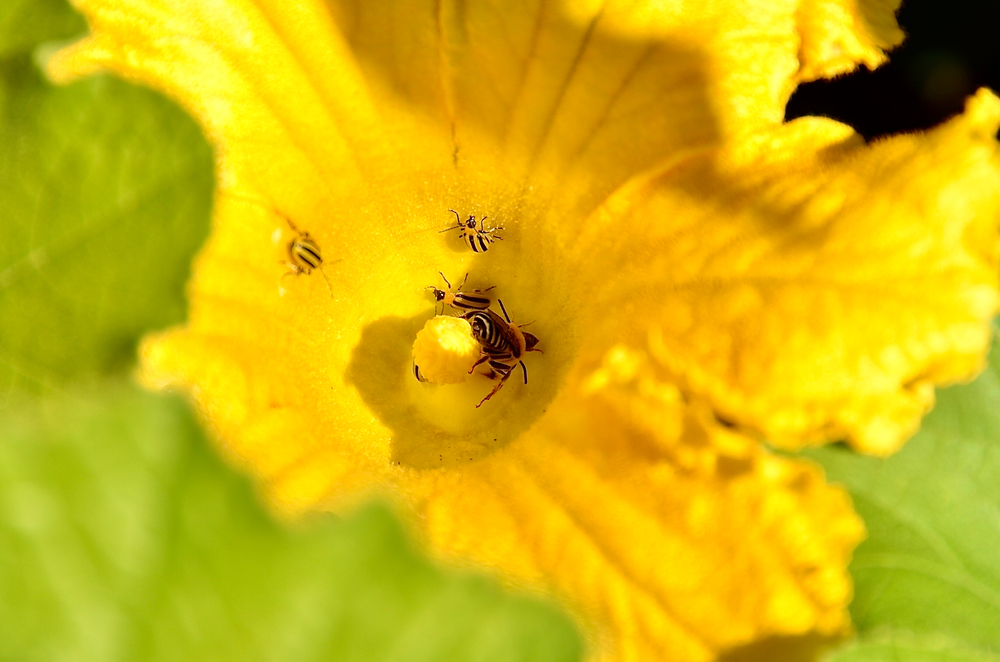 A squash bee and other insects inside a pumpkin flower.
Photography by PQK/Shutterstock
Share
Tweet
Pin
Email
778 Shares

When you think of bees, a hive humming with activity probably comes to mind. But most of the world’s 20,000 bee species don’t call a hive home. These wild species lead solitary lives instead, and around 70 percent of them build nests underground where they raise their offspring on the nectar they gather from flowers.

Incredibly, almost all scientific understanding of how pesticides affect bees has come from testing domesticated honeybees, and, more recently, bumblebees. That’s largely because these species tend to be easier to work with in lab conditions. How non-social bees cope with these chemicals is largely understudied, despite them making up the vast majority of bee species worldwide.

Neonicotinoids are a family of pesticides which have been used in farming across the world. Their chemical structure resembles nicotine and they’re designed to kill crop pests by targeting the insect nervous system. Neonicotinoids can be sprayed on plants, but are most commonly used to coat seeds. Since their introduction in the late 1980s, robust scientific evidence has emerged to suggest these chemicals impair learning and memory, foraging behaviour, and pollination in bees. The EU banned neonicotinoids in 2019, and while the UK government pledged to follow suit, it granted a special exemption for sugarbeet farmers to use the neonicotinoid thiamethoxam throughout 2021, and possibly until 2023.

Because honeybees don’t spend much time on the ground, environmental risk assessments for neonicotinoids often neglect to consider how exposure to these chemicals in the soil affects all pollinators. But in a landmark study published in Nature, researchers have shown how neonicotinoids affect bees not just by accumulating in the plants pollinators visit, but in the ground where most wild bees build their nests.

Down on the farm

Working over three years in Ontario, Canada, the researchers mimicked the conditions on a real farm by growing crops of squash plants in large polytunnels. Before planting, common neonicotinoid pesticides were applied to the seeds and later the leaves, while one chemical called imidacloprid was applied to the soil. This is used in Ontario to control the striped cucumber beetle.

Mated female bees were introduced when the crop came into bloom. They dug nests in the earth around the plants and began foraging for nectar from the large, yellow squash flowers, which they’d bring back to offspring tucked away in special chambers underground.

These were hoary squash bees—a ground-nesting species found on farmland throughout North America. Squash bees are uniquely suited to pollinating the flowers of squashes, pumpkins and cucumbers thanks to special leg hairs that fit the size and shape of their pollen grains. They tend to forage earlier in the day than most bees too, to match the early morning flowering of these plants.

The researchers studied nest building, foraging and reproduction in these bees and found imidacloprid in particular—one of the most widely used neonicotinoids worldwide—had a devastating effect on all aspects of squash bee life. Compared to insects living on untreated cropland, the hoary squash bees exposed to imidacloprid in the soil created 85 percent fewer nests, left 5.3 times more pollen unharvested and produced a staggering 89 percent fewer offspring.

Imidacloprid appeared to rob squash bees of their usual industrious attitude towards the laborious work of building nests, foraging for food and rearing young. These non-social bees lack the support of relatives in big hives, and must face these essential tasks alone. By reducing the amount of pollen they collect, the pesticide could leave squash bees and their offspring with less energy to do so.

But it’s not just bees which are in trouble. Pumpkins, squashes and gourds are entirely dependent on pollination by bees to set fruit. Without an influx of new bees or a recovery in their reproduction, farm productivity could suffer too.

Hoary squash bees, like many bee species, are specialists. Unlike generalist honeybees which are comfortable pollinating a wide range of plants, specialists co-evolved with their host plants and are uniquely adapted to pollinating them. Generalists can sometimes step in to do their work, but they’re unlikely to manage it with the same kind of skill.

Due to their wild nature, non-social insects are far harder to protect on farmland than domestic species. Honeybees hives can be moved around the countryside if an area is no longer able to support them. Squash bees and other non-social bees build small nests throughout the landscape, making it impossible to pinpoint and protect them all. Protecting honeybees from pesticides is already difficult. For wild bees which forage and nest among a wide variety of crops worldwide, it may be impossible.

Philip Donkersley is a senior research associate in entomology at Lancaster University.

Popular
7 Smokable Plants You Can Grow That Aren’t MarijuanaBrian Barth
Why Don’t We Eat Turkey Eggs?Dan Nosowitz
6 Differences Between Llamas and AlpacasAndrew Amelinckx
Holey Cow: The Wonderful World of a Fistulated CowAnna O†™Brien
Goat Sex: Everything You Wanted to Know But Were Afraid to AskAndrew Amelinckx
Explore Modern Farmer
Related
Environment, Food & Drink
Where Has All the Mustard Gone?Chloe Faure
Animals, Environment, Technology
Alaskan Salmon Face a Stream of New MinesBecki Robins
Animals, MTMF
Meet the Maine Teenager-Turned-Landscaper Thanks to Grazing GoatsBridget Shirvell
Animals, Environment, Health
To Stop New Viruses Infecting Humans, We Must Protect Bat HabitatAlison Peel, Peggy Eby, Raina Plowright
wpDiscuz
We use cookies on our website to give you the most relevant experience by remembering your preferences and repeat visits. By clicking “Accept”, you consent to the use of ALL the cookies.
Cookie settings ACCEPT
Privacy & Cookies Policy