Freight Farms Takes Container Growing to the Next Level

This Boston company has opened its new ‘Greenery’ below an overpass. 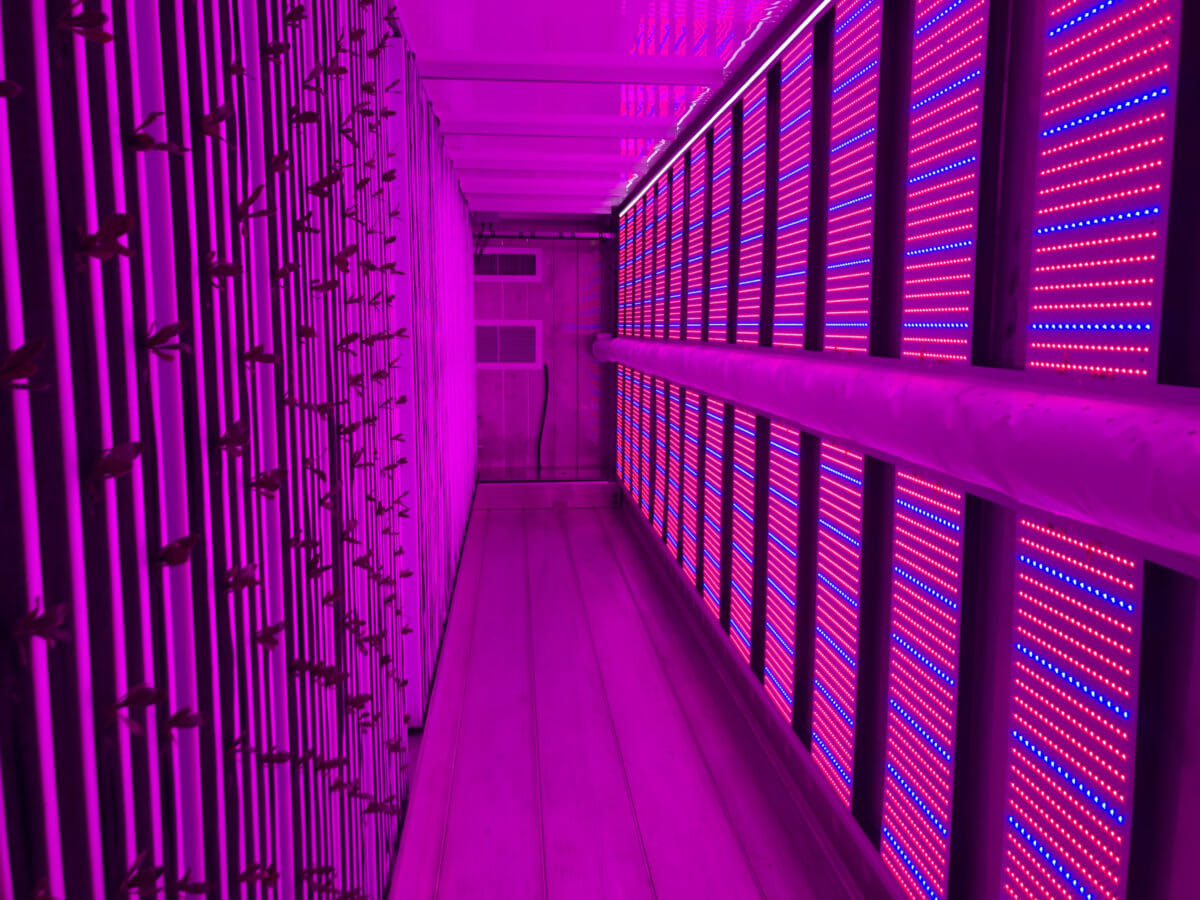 From the outside, it resembles any one of the 17 million shipping containers that are currently in use around the world. But step inside and you’re entering a futuristic hydroponic, vertical farm where cutting-edge technology can grow anything from tomatoes to turnips. It’s called the “Greenery” and it’s the newest container farm from Freight Farms, the company that has pioneered this unique style of indoor growing starting in 2010.

I recently toured a Greenery located below an overpass on I-93 in Boston’s South End neighborhood, a few blocks from Freight Farm’s headquarters, with Brad McNamara and Jon Friedman, the company’s founders. The placement of the container farm wasn’t accidental. They can be sent anywhere in the world a regular shipping container can go and used in a myriad of settings, from an urban underpass in Boston to the jungles of Vietnam, or the Google campus in Mountainview, California. 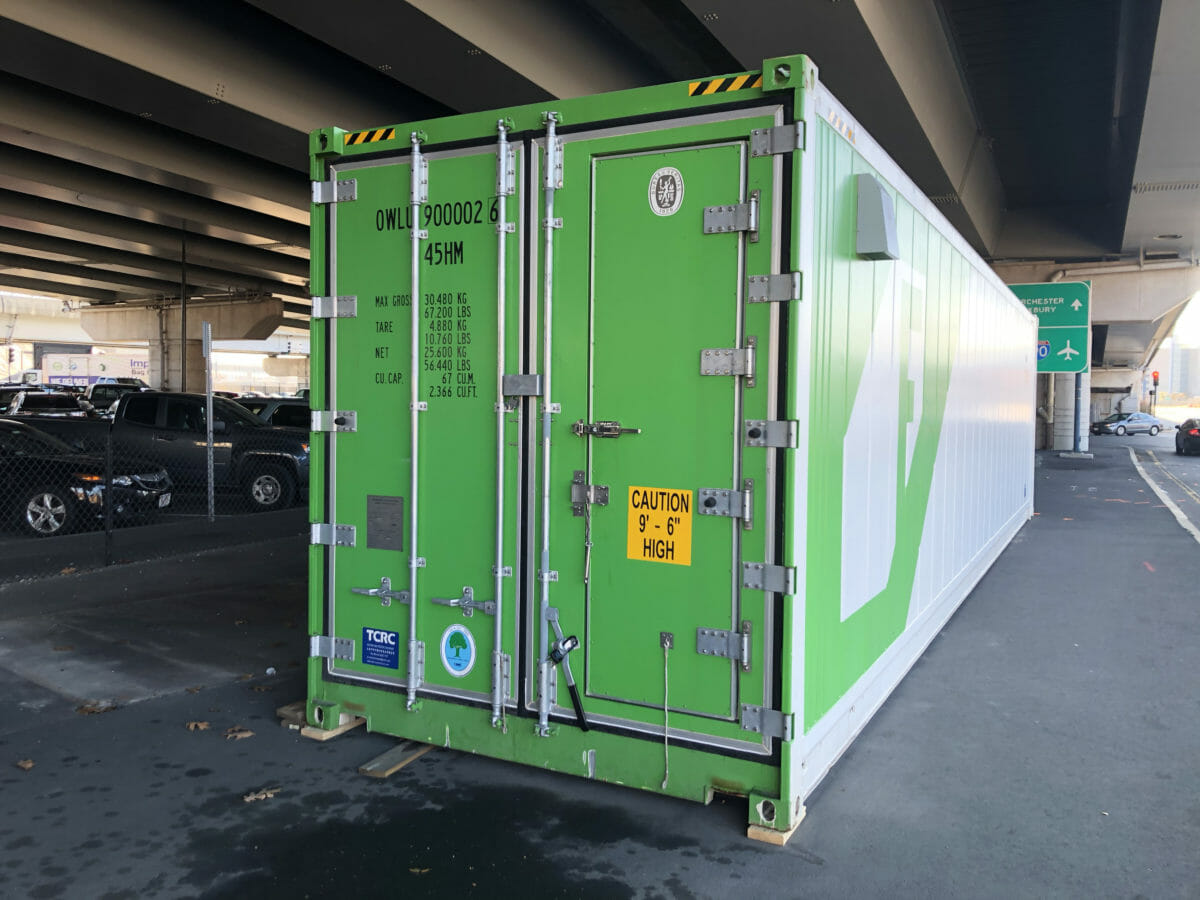 The Greenery sits below an overpass in Boston. Photo by Andrew Amelinckx

The Greenery can pack the equivalent of 3.5 acres worth of produce (13,000 plants) into a 320-square-foot space and it uses less than five gallons of water a day. That’s 99.8 percent less water than a traditional soil-based farm, according to Friedman. Farmers can tailor fit the Greenery’s growing conditions via its unique operating system to influence the flavor, color, texture, and size of crops. The company has standardized “recipes” that can be uploaded to an operating system that controls exact combinations of nutrient and CO2 levels, as well as light and water schedules. The operating system controls everything from the components and sensors to the climate and temperature, and then it continuously relays the information to a smartphone application called the Farmhand App that the farmer can also use to remotely run the farm.

The Greenery is the second-generation container farm from the company and is replacing its original model called the Leafy Green Machine.

“Inevitably, as the network of farmers grew, farmers are farmers—they’re entrepreneurial—and we wanted to encourage experimentation,” McNamara says. “That’s where a lot of the development with the Greenery came in. Light spectrum, spacing, and the biology of the plant were the limiting factors and that’s what pushed the Greenery’s development.”

The company did a complete redesign of the Leafy Green Machine, from the body to every part of the interior. Where the old model used reconditioned shipping containers, the Greenery’s shell has been custom designed, but it can still be transported like a regular shipping container. The new design has 70 percent more growing space in the same footprint. Lightweight growing panels can be maneuvered using a rack-and-pinion system that allows the farmer to customize the growing space to accommodate larger plants, improve workflow, or for hyper-specific growing conditions. A new HVAC system specifically designed for the Greenery condenses and recycles water in the air. In some humid areas, such as in Miami where one of the Greenerys has been installed, it can capture enough moisture (around 1.5 gallons of water per hour) to make the operation water positive. 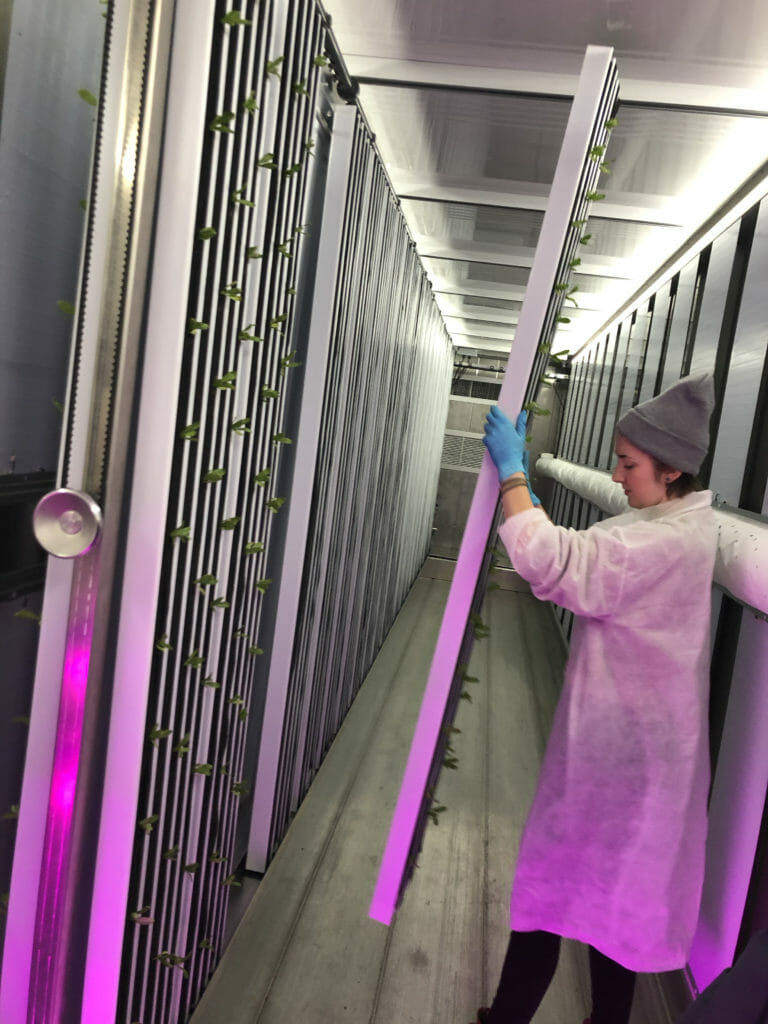 The new interior includes a workstation used for seeding, transplanting, and harvesting. It has its own dedicated watering system that can dose two independently controlled seedling troughs with water and nutrients on different cycles along with its own LED lighting system.

“You can program them to grow differently,” Friedman says.

When I was there, one of the company’s farmers, Lexy Basquette, was in the process of transplanting calendula seedlings, commonly known as marigolds, from the workstation where the seedlings grew to the plant panels that hang on a mobile rack system where the plants will grow to maturity before harvesting. Basquette was in the process of testing out four different types of calendula for a skincare company as part of a new subscription service Freight Farms offers called Grown.

“Customers either have the farm onsite or remotely and we run it so that they don’t have to have the full scope of involvement but they can still see the benefits,” Friedman says.

The Greenery sells for $104,000 (it’s going up to $115,000 after the first of the year). The first run of 20 is already sold out and have been shipped to customers in the US, Canada, Spain, and the UK. There’s a waitlist for the next 60 that will be ready for delivery before the first half of 2020, Friedman says.

“We wanted to build something where farmers on different sides of the world can communicate on the same framework, which really doesn’t happen,” Friedman says. “The sense of community we’ve gotten just from standardizing something farmers can share has been very fulfilling.”

Thats a well built 40 foot high cube refrigerated insulated container pictured in the article. The specs of having a man door installed within the container door is a brilliant space saving technique.

Related
Personal Essay, Plants
I Failed at Growing Food for Humans, So I Grew It for...Lela Nargi
Plants
Why We Need to Adopt More Orphan CropsShea Swenson
Animals, MTMF
Meet the Gay Goat Guys, a Modern Couple Committed to Putting Animals...Emily Baron Cadloff
Environment, Fish, Water
The Oyster Farmers Working to Address Aquaculture’s Big Plastics ProblemBridget Shirvell
wpDiscuz
We use cookies on our website to give you the most relevant experience by remembering your preferences and repeat visits. By clicking “Accept”, you consent to the use of ALL the cookies.
Cookie settings ACCEPT
Privacy & Cookies Policy