Farmers in Wisconsin are among the latest to embrace the idea. 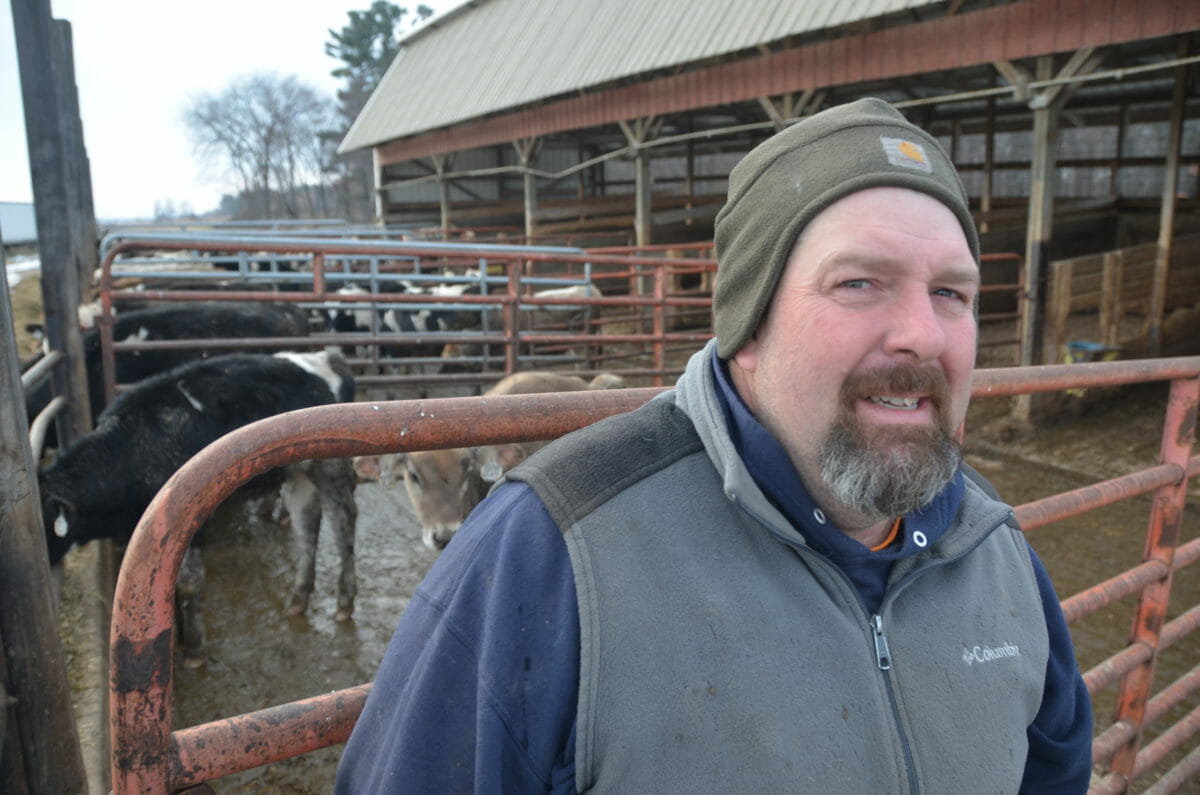 In August 2018, a small group of Wisconsin dairy farmers took a bus to Albany, N.Y., on a mission to save farms. It was almost four years into an unprecedented slump in milk prices, and in Wisconsin and elsewhere, farmers were struggling. They had cut costs, borrowed heavily, and were sinking deeper into debt. Many had given up altogether.

“Everyone was fired up,” says Josh Nett, part of the Wisconsin contingent at a national meeting of dairy farmers. “We wanted change.”

The change they sought was a nation-wide program to moderate the ups and downs of milk prices and avert the disastrous lows that were forcing some farmers out of business and imperiling the futures of many more. They wanted some form of supply management: a system that could curb the flood of milk that, in obedience to the laws of economics, drove prices down. Their aim was, in part, to guarantee farmers like Nett a decent livelihood.

“I don’t think anyone milking cows wants to be rich,” says Nett, whose farm has 257 cows. “But they certainly deserve a fair living.”

Supply management is not a new idea. It was the centerpiece of US farm policy during the New Deal and has variously benefitted cranberry growers, sugar beet farmers, and small tobacco growers. It was behind the government’s attempt in the 1980s to buy out thousands of dairy farmers. More recent proposals to regulate milk production have gained wide support but never enough to become law.

Farmers in Wisconsin, which has more dairy farms than any other state, are among the latest to embrace the idea. Beginning in 2018, the Wisconsin Farmers Union held meetings at which guests from Canada told how supply management had helped farmers there. For Wisconsin farmers, the time was ripe: From 2017 to 2018, the state had lost 590, or 6.5 percent, of its dairy farms. The WFU took its campaign, which it called “Dairy Together,” to farmers in other states, and this past September, to Washington.

Some farmers dislike the idea of federal intervention. “I’m a free-market man,” says Larry Pietrowski, who farms with 6,000 cows in Madera, Calif. “I think there’s a lot more the industry can do to get milk and milk products sold, to increase production.”

But the experience of the past five years has rattled farmers. It has given many a new sense of urgency and, advocates say, an openness to reform. The idea of supply management is already familiar to many: A growing number of dairy cooperatives, the farmer-owned associations that buy and process much US milk, have started their own internal supply management systems in an effort to keep production within their capacity.

Moreover, the campaign for supply management takes place against a backdrop of decline and consolidation that long predates the latest crisis. The US had more than 600,000 dairy farms in 1970; today, according to the most recent USDA figures, there are barely 37,000 left. Today’s dairy farmers are survivors. They want to protect their own farms and livelihoods but also the possibility of dairy farming for their children and grandchildren. 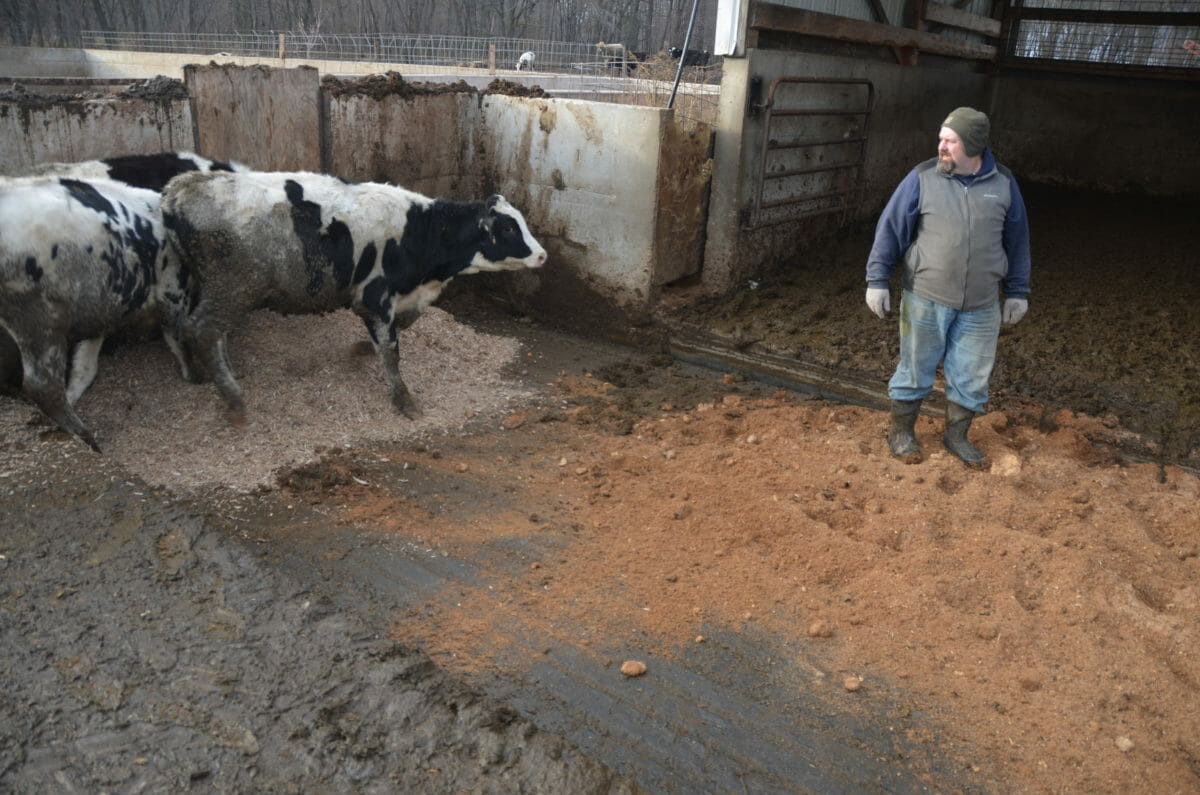 Josh Nett tends to his cows on his dairy farm in Fremont, Wisconsin in November, 2019. Photo by Richard Mertens

Nett is 45 years old and has devoted his life to taking care of cows. He knew it wouldn’t be easy—twice-a-day milking may be the most grueling schedule in agriculture—but nothing prepared him for the hardships and worries of recent years. He and his wife, Theresa, put off repairs, cut back on help, refinanced twice, and just barely survived. By last summer, when milk prices finally began to rise, he felt relieved, but little more. He says it will take years of good prices for farmers like him to recover.

“If we go through again what we went through in the past four or five years, none of us would make it,” he says.

It was late afternoon, and Nett, a stocky man with rubber boots and a green fleece cap pulled low, had more immediate concerns: changing the bedding for his heifers. The sun shone weakly over the fields and woodlots—the trees bare, the corn down to stubble, early snow lying in patches. Using a yellow skidder, he scraped the pens clean and spread bucket loads of fresh shavings. When he was done, he closed the gate and paused.

As a Canadian Dairy farmer I can say supply management works. I milk 45 cows, and can make a decnt living at it.
I am paid a fair price for my milk, with no fluctuations in price. I also never have to worry about finding a processor for my milk, the marketing board looks after that, so it will always have a home.

Agree ALL farmers need to be able to earn a decent living. Would say the biggest part of the price of a gallon of milk goes to the processor, just like with vegetables are fruits. Anything that puts more money in the farmers’ pockets sounds good to me.

Did we not as milk producers just lose a 500 million dollar lawsuit filed by grocery stores claiming we tried to control the milk supply my self-limiting our own production through a partial herd buyout program that we paid for through an assessment on every hundred pounds of milk produced. And that program was supported by the government and approved by the courts. Now we’re supposed to put ourselves through it again. Twice we’ve tried this, I believe it was the late 80s and again around 2000. The only thing that has brought a reasonable increase in prices was when… Read more »

Why is this article all about the nostalgia of farming and less about supply management..what a useless lack of information article

I’m not sure that a guy running a 6,000 corporate dairy cow operation is representative of the class of all dairy farmers, large and small. But personally I think the days of small dairy farms are long gone unless they’ve cultivated a specialty operation (e.g., raw milk direct to consumers, artisan cheese, etc.). Dairy farming is hard, sometimes dangerous, work and the rewards are small compared to the exposure to hardship, financial and otherwise. Unless someone has a niche with an identified demand, I’d counsel against going into farming at all.

Calves grown into cows, but if they are removed before they can produce milk, then the milk supply could be controlled by keeping the heifer herd down. Producers should contribute some amount to a fund to buy up the excess heifers. Each producer would receive certificates based on the amount of milk sold that could be sold or traded if desired. Those certificates would have a value dependent on the amount of heifers needed to be removed. Sure culling would slow down, but lower SCC to encourage the removal of those high count cows. Cull heifers would need to be… Read more »

Price is always determined by supply and demand..it’s rule #1 in economics…therefore if you reduce the supply based on demand you start getting control over what price you get..very simple..just who’s gonna sell have their cowherd? Short term pain but longterm gain.

Dairy is a dying industry and had been for decades! The government can’t keep giving multi-billion dollar bailouts every year without tax payers noticing and protesting. The stockpile of dairy in the US, now over 1.5 billion pounds, is at its largest in history. No one is buying except the government. Get into something else quick while you still have any capital.