From Commodity Crop To Community Crop

Midwestern farmers branch out with pizza. 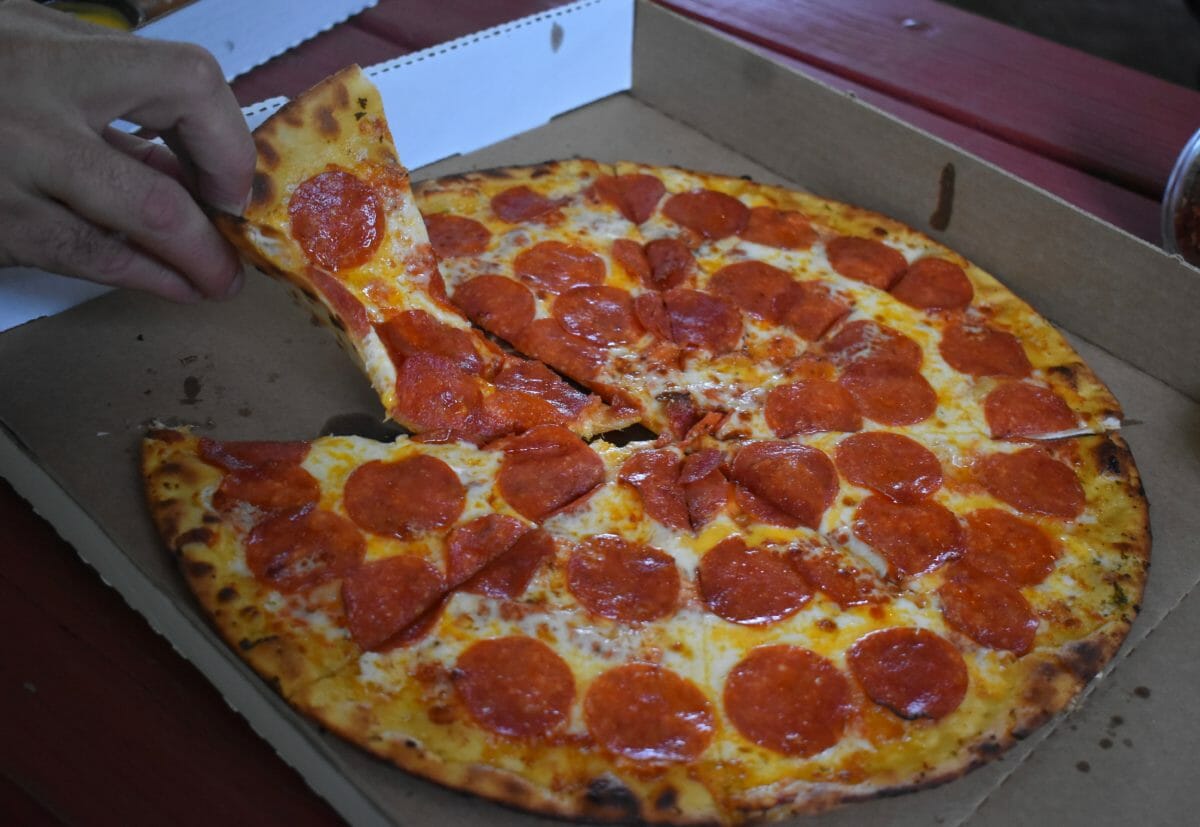 The phenomenon of the Midwestern pizza farm evolved partly out of ritual and partly out of necessity. Farmers are proud to use their wealth of land to host friends and family for farm-fresh dinners. Back since the hoedown, a dance party tradition turned American folk musical form, the Midwestern farm has been a place for community revelry in one form or another. Today, there are more than a dozen pizza farms across Minnesota and Wisconsin. Since 2017, Winghaven Pizza Farm in Galesville, Wisc. has been serving drinks, hosting a stage with live music and baking pizzas in stone ovens as quickly as they can toss them.

Rob Grover’s family has been stewarding this land for five generations. His farm, like most around Galesville, is planted with corn. When Grover’s father retired, the family needed to add a new revenue stream and started to lease some unused fields. They had to think of other new ways to make the farm profitable. Now, every Friday through Sunday, the Winghaven Pizza Farm throws a farm-aid pizza party that anyone can attend. Friends and cousins work in the trailer kitchen taking orders and firing stone-oven pies, or behind the makeshift bar serving local beer and wine. Grover got the inspiration to start the pizza farm while eating at a cookout on another farm with his friend, and his pizza recipe developer Greg Roskos. They realized that with Grover’s farm and Roskos’s passion for food they could build a new kind of farm on the old Grover family orchards. Today, Winghaven sells around one hundred pizzas per night. 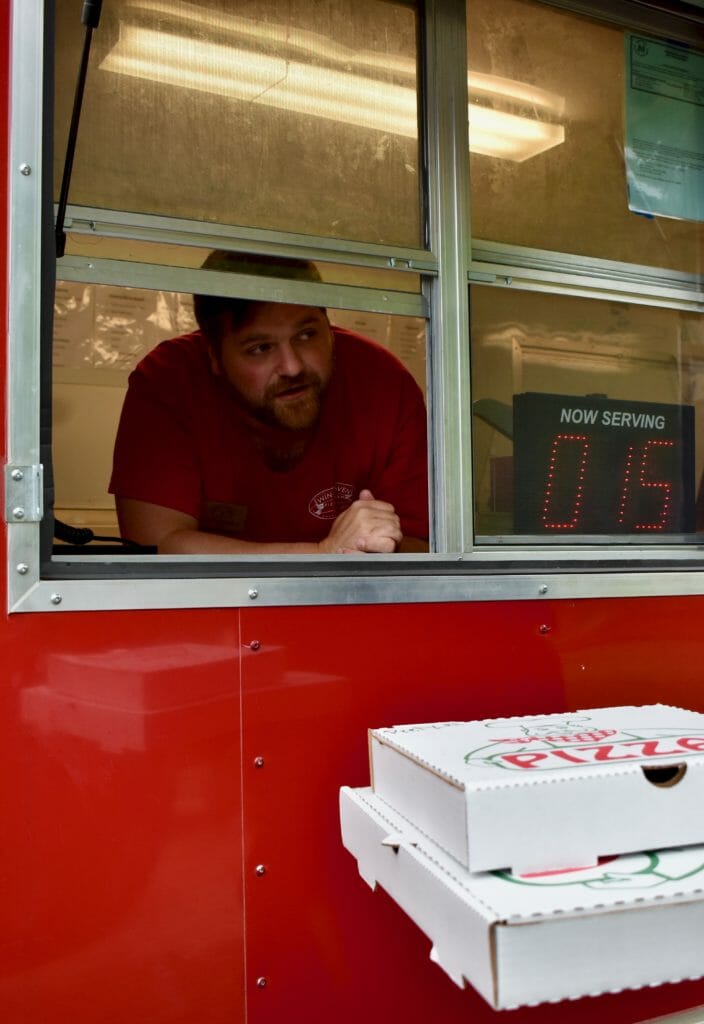 Rob Grover serves pizza on his farm most nights. Photo by Maggie Rosenberg.

The name for the pizza farm comes from a previous generation’s venture growing apples—Winghaven Orchards. They were inspired by migratory birds that sought a haven in these orchards a century and a half ago. Grover’s great-great-grandparents came from New England to settle in this land. In the generations since, the produce of choice has gone from apples to a commodity crop, corn, to a community crop, pizza.

Grover‘s version of farm life is different from that of previous generations, but his goal is the same. “The land has always taken care and carried our family through good times and bad,” he says. “So we feel a deep obligation to persevere the land for generations of our family yet to come.”

We arrived on a slow day, because the weather was a bit nasty, yet still, there were several families huddled up under a tent ready to eat. The storm eventually cleared, and they took in the best digestive aid known to man: a walk through open pastures in the fresh country air.

Using local ingredients is important for Winghaven. Next year, Grover hopes to begin growing some of his own ingredients for the pizza, but for now, he doesn’t mind reaching out to neighbors for what he needs.

Grover and Roskos spent countless hours on pizza trials to perfect a crust with the right texture and just the right blend of five local cheeses to top the pie. The results are a thin crust with crisp edges and a thick layer of rich cheese (this is Wisconsin). It’s cut up into slices rather than the typical Midwestern grid pattern. It’s a satisfying and hearty pizza, best enjoyed with one of the local beers on offer. If you happen to be traversing the Northern Mississippi River on a weekend, don’t miss the total experience of a Midwestern pizza farm. 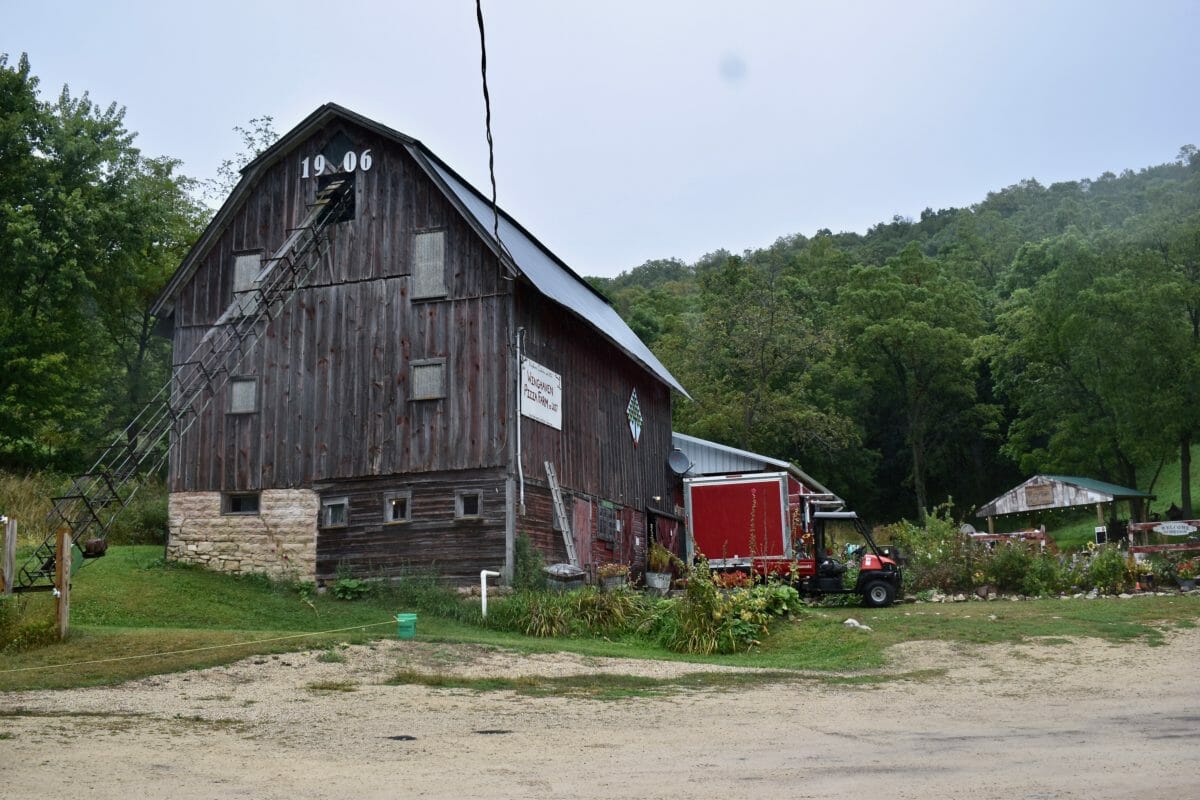 Great to read all your contributions. Does Winghaven run farm holidays? I am in the UK!

Popular
7 Smokable Plants You Can Grow That Aren’t MarijuanaBrian Barth
How to (Actually) Get Rid of Fruit FliesEmily Baron Cadloff
What to Do With an Abundance of PeppersShelby Vittek
Yes, the Government Really Does Stash Billions of Pounds of Cheese in...Emily Baron Cadloff
6 Differences Between Llamas and AlpacasAndrew Amelinckx
Explore Modern Farmer
Related
Food & Drink, MTMF
Meet the Former Chefs Growing Restaurant-Driven Produce in Suburban AlbanyKerri Sullivan
Food & Drink
‘Tis the Season For GleaningCrystal Sands
Food & Drink
Food Inflation Is Eating Up Grocery BudgetsShea Swenson
Environment, Plants
Making the Case for IntercroppingShea Swenson
wpDiscuz
We use cookies on our website to give you the most relevant experience by remembering your preferences and repeat visits. By clicking “Accept”, you consent to the use of ALL the cookies.
Cookie settings ACCEPT
Privacy & Cookies Policy