It’s a blistering afternoon in central India, but Mallesha Singam is having an unusually fruitful harvest for the dry season when, typically, nothing grows outside.

For Singam, this dormant languishing period for outdoor fields has gotten longer over time. “The coldness has dropped and the temperature has increased,” says Singam, who has farmed his land in Telangana, India for more than 40 years. “Whatever we used to grow in winter, the yield for the same is less now.”

In the open air, his small plot is currently an empty patch of reddish-brown soil. Inside Singam’s new greenhouse, however, a new story emerges. Singam is one of several farmers who invited me into his greenhouse, a modular structure of mesh netting where he’s growing cucumbers.

“It’s a special atmosphere,” Singam says. “It doesn’t grow like this outside. Now, these plants not only tolerate the heat, but they survive with less pests and less water. That’s the difference.”

The future in Telangana, and much of India, holds increasing drought and rising temperatures due to climate change; a small NGO named Kheyti is working with more than 150 farmers to install greenhouses that can grow perennial crops—mostly capsicum and cucumbers.

As seasonal variability of all kinds—economic and agronomic—accelerates, Kheyti wants its farmers to feel that the fruits of their labor are still something they can control. 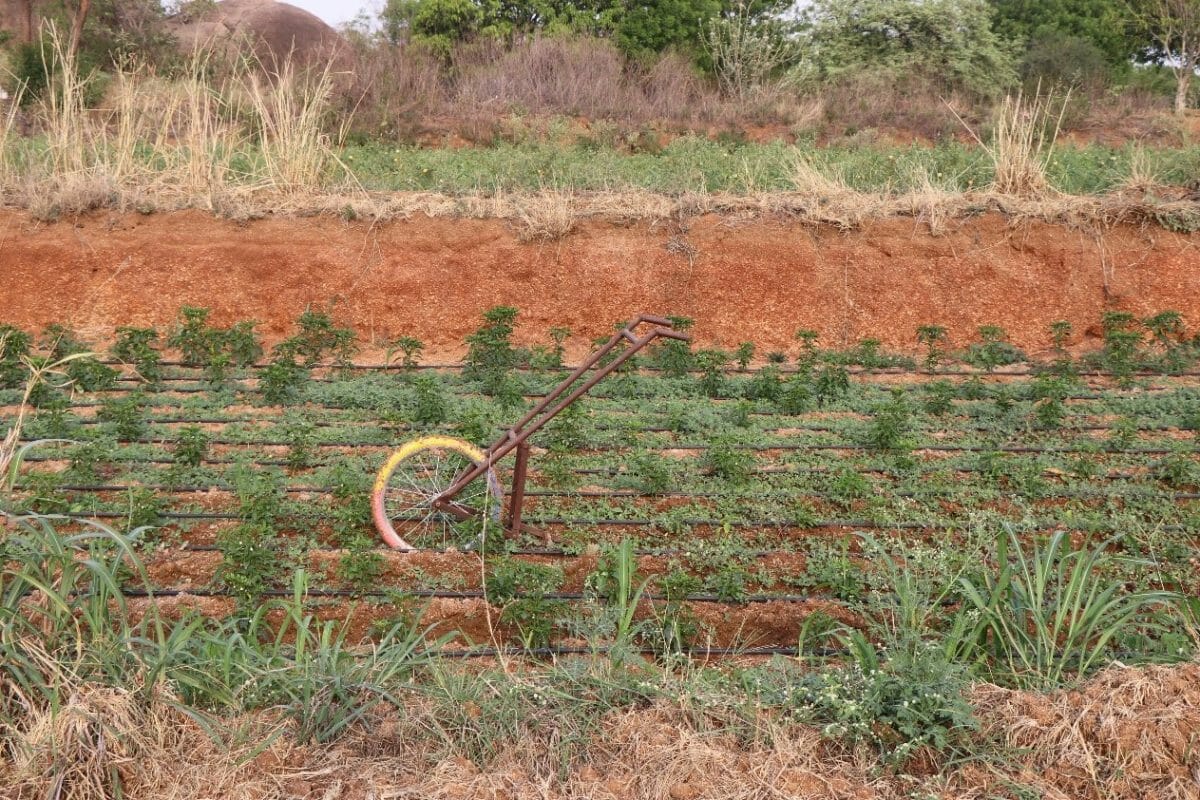 Singam has not had to face the economic crises that have befallen some farmers in the area. According to Kheyti agronomist Sai Charan Kasam, Singam is one of the “better” greenhouse farmers I will visit that week. Despite the promise of a more resilient source of income, the transition to a new farming technique can be a difficult one.

“Farmers are either not used to greenhouse production or discipline in agriculture,” says Kheyti co-founder Saumya (no last name). “They are just used to open farming where you throw some seeds down and expect everything to grow.” With greenhouse farming, every day is crucial.

Of the dozen or so plots that I personally visited, several had crop damage. In one greenhouse, the entire crop had been infected by nematodes, microscopic parasites that live in the soil and cause stunted growth in the plant. In another, a lack of watering led to rows of crisp, brown cucumber vines. Other common pests and diseases in the greenhouse include mites and white flies.

Within its first two years, Kheyti has been somewhat selective about which farmers to contract. However, within the near future, greenhouses like those Kheyti provides may become essential for most farmers in the region to stay above water — in more ways than one.

“I think greenhouse farming is going to take over,” says Saumya. “The direct impact of climate change is water levels going down. And a lot of farmers don’t have water today… What farmers realize is that something is different, but they don’t know why. We call it climate change, but they are the worst affected by it.”

I do enjoy the farming talk and am in central Africa planning to do much in this,
I have regroup some friends and some community members to go flat out and try to assist/empower youths, aged ,orphan, widows ,widowers and the vulnerable I am doing the registration with my government then start our projects in the Agricultural unit before other
projects may follow were your input interns of modern farming will be of great help for me and the Team
Finally your information to farmers is of great help.