Can You Combine Sheep Farming With Winemaking? These Two Vermont Friends Are Going to Find Out

Ethan Joseph, a winemaker and Michael Kirk, a shepherd, had a lingering dream to combine their two agricultural fields. Now they’re finally doing it with Vermont’s first pilot project that explores the impacts of sheep integration in viticulture. 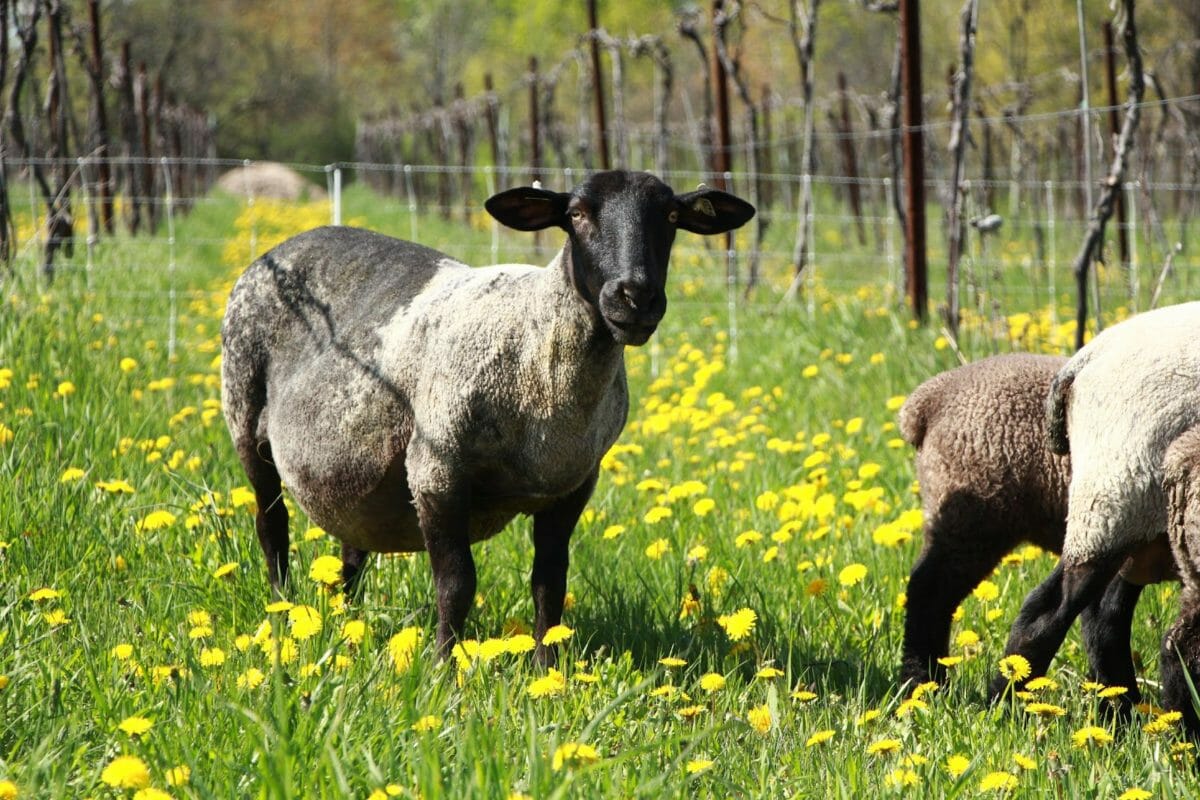 They’re an unlikely pair, but Vermont friends Ethan Joseph and Michael Kirk have managed to devise a partnership that combines their two separate working worlds.

Joseph, a winemaker, and Kirk, a shepherd, are the faces of the state’s first agricultural initiative exploring the fusion of sheep with viticulture.

According to Kirk, he and Joseph have long had aspirations for a venture that utilizes their professional resources in the most efficient way possible.

“A lot of agricultural systems have become compartmentalized and separated, so we thought – let’s see how we can integrate,” Kirk said, who runs Greylaine Farms with his partner Marion Bourgault-Ramsay in Charlotte, Vermont. “We’re bringing attention to integration of two agricultural endeavours that people have never thought of. No one is doing this around here.”

This idea to blend their fields will be observed in a federally funded study with the University of Vermont.

The arrangement allows for Kirk’s sheep to graze the vineyard, with the expectation that they will eat away at unwanted vegetation

The catalyst that launched the initiative was an Instagram photo of Dr. Meredith Niles, a food systems scientist and assistant professor at the university who was captured conducting research with sheep farmers in New Zealand last fall.

Niles is an experienced researcher who is specialized in the integration of sheep into viticulture production.

The duo decided to contact Niles to see if she would be interested in helping make their dream a reality. With her assistance they applied for a grant, successfully receiving money through the USDA’s Sustainable Agriculture Research and Education Program. 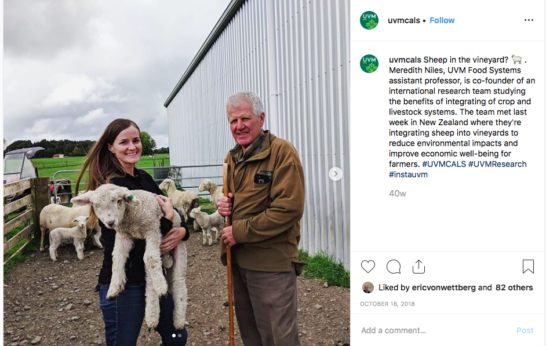 “It just kind of fuelled the fire to get us really acting on it,” Kirk said.  “I think we were probably going to do something regardless, but it was nice to have further incentive and a professor who has done the study side of work to get their expertise.”

The project began in mid May when five of Kirk’s sheep were relocated to Shelburne Vineyard, in Shelburne, Vermont.

The sheep graze the vineyard during its dormancy period to feed on the vegetation between and under vines. They’re also contained within approximately ¼ acre paddocks that are moved daily or every other day.

Through assigning the sheep to specific areas, a comparison can be made to those areas that are untreated. Researchers will examine the soil, the foliage, the grapes, the sheep and even the thoughts of Shelburne’s customers on the unique system integration.

In New Zealand, where this is a common practice and where Niles has done a large bulk of her research, the sheep are placed in the vines from May until September because of the climate.

However, the farm animals in Vermont were used from May until June before the vines got long enough for the sheep to be able to reach and chew on them. They will make their return from September until October for the harvest season. 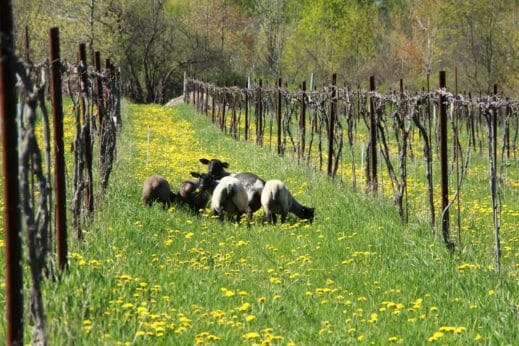 Michael Kirk’s sheep were placed in small paddocks on the Shelburne Vineyard where they munched on vegetation surrounding the vines. Photo by Samuel Rheaume.

Along with the fact that the project is the first of its kind in Vermont, a state with an exceptional climate, Niles said the study is also incomparable to past research in the field because of its multifaceted approach.

“There’s some studies out there that look at the ecological aspects of this or the labour component and the economic component, but to integrate all of this together in one study is pretty unique,” she said.  “The research does show that there are a lot of benefits, but there are also challenges and trying to look at the whole system in one study will really help uncover where those trade-offs might be.”

With Niles’ research, she was able to prove ecological and economic benefits combining sheep farming with winemaking, as well as an improvement of farmers’ livelihoods.

“Think about the reduction in fuel costs and greenhouse gas emissions from mowing and the [reduction in] labour costs from that,” Niles said.  “And then fewer herbicides and chemicals in the environment because the sheep were able to eat the weeds that the farmers had in their viticulture system.”

While currently the Vermont pilot project is only funded for one year, Joseph said he’s talked to Niles and Kirk about possibly expanding it and using more sheep to cover the vineyard’s entire 20 acres in the future.

“I just wanted to have some sheep in the vine,” he said. “This is looking like it could turn into a multi state or regional project… There’s a lot more vineyards in Vermont that are excited by this.”

Though the results of the study won’t be ready until the end of the year, Joseph, who has monitored the sheep on the vineyard, said he’s noticed some correlation to his experience and the benefits outlined in Nile’s New Zealand research — like boosted morale and reduced mowing.

“They’re super cute animals, they’re out there doing positive things to the vineyard. It just felt good to have them out there,” he said.

And Kirk, who said he was grateful his sheep were able to provide some value to his friend’s business, believes that the arrangement holds more advantages than what they’ve currently discovered.

“If anything, this tells a great story. It’s exciting for agri-tourism. It can provide more of a draw for people to visit his vineyard, see our sheep and then just learn about animals and understand,” he said.  “We farm the way we farm for many reasons and I hope those benefits that we see on our land can be expanded upon or taught.”