The Harpkes are part of a small yet growing movement of young farmers in South Florida. 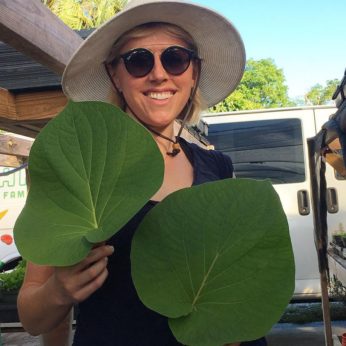 Airplanes rumble over Harpke Family Farm in Dania Beach, Florida. When married couple Tamer and Claire Harpke founded the farm in 2014, they were nervous about it being in the flight path of a major airport. But its proximity to Fort Lauderdale–Hollywood International Airport has actually worked in their favor, making it easy for their main customers, including Miami chefs like Alter’s Seth Blumenthal and Kyu’s Michael Lewis, to visit.

“We start relationships on the farm,” explains Claire. “That’s our vetting process. We need people who are real partners — who care about what we do and see the value in it.”

This is the fourth year-round growing season for the young couple. They carefully tend to native Everglades tomatoes, Seminole pumpkins, microgreens and much more using organic growing practices on one packed acre. The farm is a meeting place for Girl Scouts, yogis and Slow Food fans. The Harpkes recently launched a farm-to-table dinner series with local chefs. Pedro, the farm dog, scares iguanas away while patrons eat at long, dark wooden tables under a Miccosukee chickee hut bordered by coconut-bearing palms. They also recently hosted a meeting of the international Social Gastronomy Movement, which fights social inequality and hunger through food. 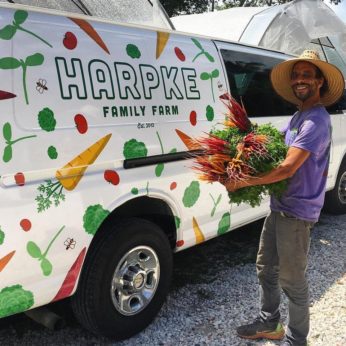 Though they’re thinking globally, the Harpkes are part of a small yet growing movement of young farmers in South Florida. Little River Cooperative in Miami even has a small Urban Farmer Incubator program, in which they provide a plot of their land and mentor aspiring farmers. While other farms may focus on community-supported agriculture (CSA) and farmers’ markets, the Harpkes’ business mostly comes from high-end eateries.

The Harpkes built their business around connections made while working in the restaurant and boutique winery industries. Tamer, who has always had a green thumb, says that while he was on the road as a wine supplier, he saw award-winning restaurants embrace and take pride in knowing where their ingredients come from. “It broadened my perspective of the need for that to be the norm,” he says.

When Tamer’s mother suffered a debilitating stroke in 2012, he quit work to take care of her, driving two hours to Naples, Florida, several times a week. He started growing microgreens on her porch and eventually turned his backyard at home into a small farm. He met his farm landlord, who was cycling through tenants, at a farmers’ market. “Growing food is the easy part,” explains Tamer. “Selling food for a living is the hard part. But I was confident in two things: knowing how to grow plants and knowing how to build relationships.” So, Tamer and Claire took the leap. Now, four years later, they are expanding their clientele by working with specialty distributor Sunshine Provisions.

In 2017, when Harpke Family Farm was hammered by Hurricane Irma, the chefs of Recipe for Change hosted a fund-raiser to help them rebuild. The two were so grateful, they now share their time and produce with the homeless shelter Camillus House. In contrast to the chefs with great “tweezer game” that they frequently work with, “This lets us remember that it’s just produce,” says Claire.

While their young farm has experienced growing pains, the challenges it’s faced have matured its endeavors, lengthened its reach and shown what it looks like when the gastronomy and farm communities support each other fully.

South Florida has a flourishing and supportive network of young farmers who farm sustainably and are engaged in their surrounding communities.

Little River Cooperative For seven years, Tiffany Noe and Muriel Olivares of Little River Cooperative have grown and distributed food locally through their 130-person community-supported agriculture (CSA) program, restaurants and markets. They host workshops with mixologists who use their bitters to craft cocktails, offer chef-led pickling and have an Urban Farmer Incubator program to mentor aspiring farmers.

Health in the Hood Asha Loring launched the nonprofit Health in the Hood to help low-income residents in Miami’s food deserts eat more nutritiously by planting community-driven gardens and giving away the produce for free.

Ground Floor Farm Jackie Vitale, Micah Hartman and city commissioner Mike Meier founded and run Ground Floor Farm, the only urban farm in Stuart, Florida. It also functions as an event space, a market and a chicken farm and is home to the Florida Ferment Fest.

Popular
7 Smokable Plants You Can Grow That Aren’t MarijuanaBrian Barth
How to (Actually) Get Rid of Fruit FliesEmily Baron Cadloff
Yes, the Government Really Does Stash Billions of Pounds of Cheese in...Emily Baron Cadloff
What to Do With an Abundance of PeppersShelby Vittek
Meet the Former Chefs Growing Restaurant-Driven Produce in Suburban AlbanyKerri Sullivan
Explore Modern Farmer
Related
Lifestyle
A Modern Farmer in CongressTom Wolf
Animals, How-To, Plants
Dear Modern Farmer: How Do I Get Started With Cover Crops?Manjula and Orin Martin
Food & Drink, How-To, Plants
Dear Modern Farmer: Can I Legally Grow Food in My Front Yard?Kristen Ploetz
Animals, How-To, Plants
Dear Modern Farmer: Did I Dig All Wrong?Manjula and Orin Martin
wpDiscuz
We use cookies on our website to give you the most relevant experience by remembering your preferences and repeat visits. By clicking “Accept”, you consent to the use of ALL the cookies.
Cookie settings ACCEPT
Privacy & Cookies Policy