Magic mucus, to be precise. 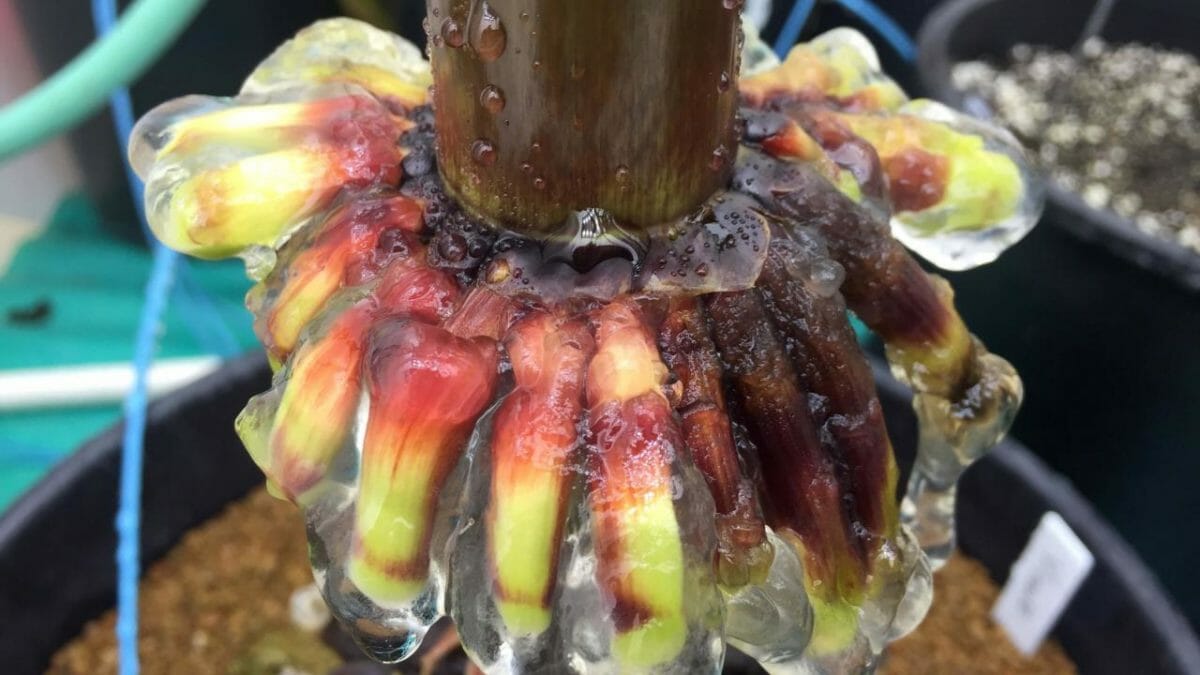 Nitrogen is essential for crops to grow, and it’s abundant in the air, but plants have trouble getting it. Some, like legumes, are able to house bacteria that can transform nitrogen in the air into a form the plant can use; others, including important crops like corn, wheat, and rice, can’t do this, instead requiring vast amounts of fertilizer. But what if there was another way?

Researchers at the University of California, Davis have managed, after many years of searching, to find a variety of corn that’s able to house those helpful bacteria, just like legumes. This ability is called “fixing” nitrogen, and if the researchers can figure out how to cross-breed with modern corn to give that same ability, we could have a major achievement for farmers and the environment.

Corn, like most other plants, sucks up nitrogen from the ground, but does not provide a home for the bacteria that “fix” it into a form the plants can use. Legumes, which do “fix” nitrogen, form little knobbly nodules on their roots for the bacteria, but nobody has yet been able to figure out how to get corn to do the same. (Though many are trying.)

Without that ability, to grow corn in the quantity that it needs to be grown today, farmers are forced to drench their corn in fertilizer, which contains nitrogen. This is, frankly, a major issue: according to the USDA, somewhere between 40 and 80 percent of fertilizer is not actually taken in by the plants, but instead runs off into the environment. An excess of fertilizer is a nasty problem; when it runs into lakes and ponds, it spikes a huge growth in aquatic plants, which suck the oxygen out of the environment, literally choking the ecosystem.

But the California researchers discovered a deeply strange, sort of oogy variety of corn in the Sierra Mixe region of Mexico, in the state of Oaxaca. Mexico is the site of the domestication of corn; there are thousands of different varieties, some with ancient history and wildly different appearances and uses.

This particular corn grows very slowly but very tall, about a third taller than conventional corn crops. But it also grows these strange above-ground roots which never touch the ground; they look sort of like spider legs. Those roots secret a mucus-type substance, clear and thick and sticky, which provides the sort of low-oxygen, high-sugar environment that a certain treasured guest loves. The corn, in short, creates its own home for nitrogen-fixing bacteria.

The discovery is potentially enormous: if this corn can be cross-bred with conventional corn (probably through something like CRISPR, a genome editor which makes this sort of thing much quicker and more precise), it could potentially give conventional corn that same strange mucus-y aerial roots. A corn crop with the ability to fix nitrogen would, very literally, change the world for the better: it would dramatically reduce the amount of fertilizer needed. Also: what a good weird corn!

Related
MTMF
How Saving Seeds Is Helping This Modern Farmer Reconnect With Her RootsBevin Cohen
Future of Food, Plants
Scientists Grow Plants in Moon Soil for the First TimeShea Swenson
Environment
High Winds Are Rattling US Farmers This SpringSarah Kuta
Food & Drink, Technology
How High-Pressure Processing Is Helping Remote Farmers Bring Fresher Foods to MarketNaoki Nitta
wpDiscuz
We use cookies on our website to give you the most relevant experience by remembering your preferences and repeat visits. By clicking “Accept”, you consent to the use of ALL the cookies.
Cookie settings ACCEPT
Privacy & Cookies Policy