This former catering exec's transition to farming offered up an unusual number of twists, including life-threatening illness and natural disasters. 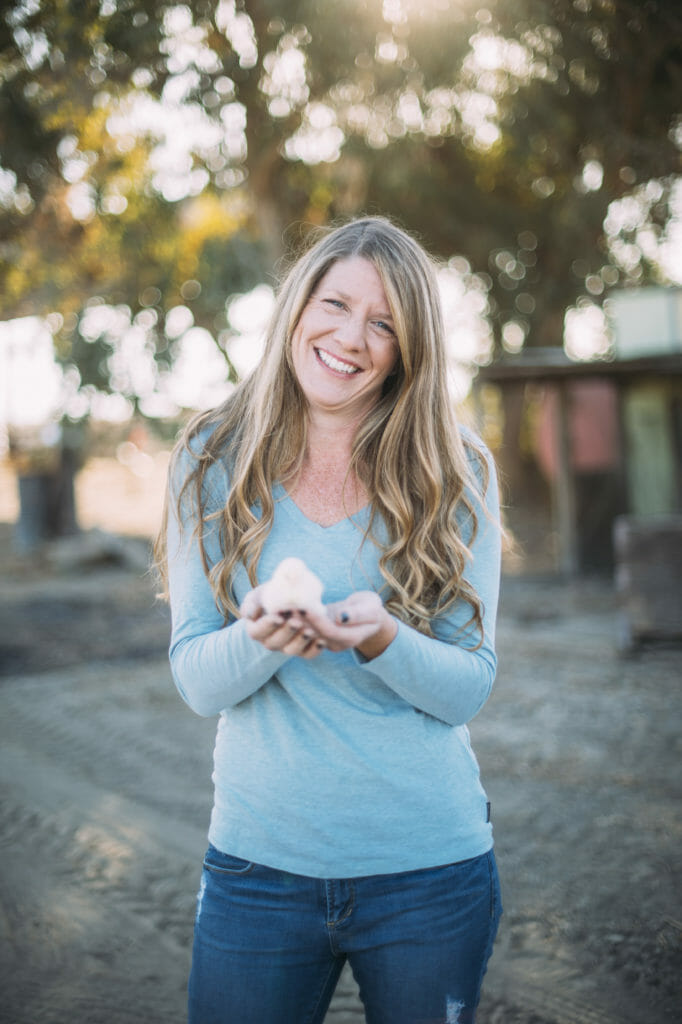 Meredith Bell, founder of Autonomy Farms, was working as a catering exec when she had an epiphany: "I realized people had no idea where their food came from and they didn't really care...I can start a farm and actually have the opportunity to make a difference."
Photography AutonomyFarms.com
Share
Tweet
Pin
Email

On one hand, Meredith Bell’s story is a classic chuck-it-all tale: Corporate drone escapes the office tower to lead a more meaningful life as a farmer. And she succeeded, big time. In less than five years, Bell, 37, has grown her produce”“and-livestock business, based in Bakersfield, CA, from 1.5 leased acres to 20 acres that she owns. Plus, her cheekily-named Autonomy Farms has earned slots at nine weekly farmers’ markets (including the coveted Santa Monica and Hollywood markets), supplies fancy restaurants like April Bloomfield’s buzzy L.A. spot The Hearth and Hound, and feeds a 100-member CSA.

On the other hand, though, Bell’s second act has offered up an unusual number of twists, including life-threatening illness and natural disasters that nearly shuttered the farm. And did we mention she won a jackpot on a reality show?

“I learned how to slaughter chickens on YouTube, as insane as that sounds.”

MF: So how did you start farming?

I was director of business development for a huge catering company, but the more involved I got, the more I realized people had no idea where their food came from and they didn’t really care. They were more concerned about the bottom line versus their health or the well being of the farmer. And I got totally jaded by it. So I was like, “I have my savings. I can go back to grad school or I can start a farm and actually have the opportunity to touch people and hopefully make a difference.”

I had no idea how to farm, but I did a ton of research. I learned how to slaughter chickens on YouTube, as insane as that sounds. One advantage I had from my catering background was being able to predict food trends. I knew what chefs were likely to be putting on menus and I knew about seasonality of the produce, so that’s been a huge asset.

MF: Your first harvest was spring of 2014, and things were going pretty smoothly for more than a year, but then you were blindsided with a health crisis. What happened?

I hadn’t been feeling well for weeks. I couldn’t eat anything, couldn’t sleep, I had chest pain. The doctors kept telling me it was gallstones. and I kept telling them, “There’s no way in hell I have gallstones. I don’t drink soda, I don’t eat fast food, I don’t eat sugar.” Then, one night I was driving on the freeway, coming home from a farm dinner we’d done at a restaurant in San Diego, and suddenly I couldn’t see. I completely lost my depth perception. I made it to a friend’s house about two blocks away, knocked on the door and passed out. He rushed me to the emergency room and it turned out I had had a minor stroke, which is pretty unusual for a 35-year-old. I didn’t have any risk factors for a stroke, my blood pressure and cholesterol were normal.

MF: But that wasn’t the end of it?

A week later, I was still feeling like death. My doctor took full body scans and found that I had multiple blood clots in my right leg and blood clots in both my lungs. There was still no answer as to why, which was hard for me because I believe most of our health is based on what we eat and how active we are. I felt like a hypocrite because here I am living this healthy lifestyle, thinking I was gonna live forever, and all of a sudden I’m lying in the hospital hooked up to heart monitors and on a ton of meds.

MF: Who tended to the farm while you recovered?

Luckily when this all happened the farm hadn’t scaled to the point where it is now. My family stepped in for a few months until I was strong enough to ease back. The farm itself kept me going, too. There were plenty of times I wanted to curl up in bed, but that wasn’t an option. Animals had to be fed. Crops had to be watered. If I’d had a normal job working for someone else I honestly think I would have quit. But when it’s your passion and everything you’ve worked hard for you’re like, ‘I’m not going to let this take me down.’

MF: In January of this year, you and the farm’s livestock manager Nick Etcheverry appeared on an episode of the CNBC reality show Billion Dollar Buyer, which profiles struggling small businesses, and secured a $100,000 deal from the host, restaurant and casino mogul Tilman Fertitta. How did that come about?

In February of 2017, about a year after I had the stroke, we got hit with floods from La Niña. The farm was underwater, there was literally trash floating on top, and the flood had killed a bunch of our chickens. The Billion Dollar Buyer producers had somehow heard about our situation, and they reached out to invite us on the show, but I said no. The farm was such a mess, I certainly didn’t want a camera crew out here. At that point, I didn’t even know if I was going to have a farm in six months. They kept asking, and I kept saying no until they sent me one episode to watch and I thought “This could be an opportunity… ”

MF: Did the money you won on that episode save the farm?

It helped, and it was great because it brought publicity to the farm, but it wasn’t what saved us. Some customers of mine threw us a fundraiser, and I had an angel investor who gave me a loan at basically no interest.

MF: So what’s next for you… and the farm?

I’m at the point now where I’m working smarter, not harder. I’m focusing on the profitable pieces of the business. A few high-profile chefs discovered our chickens and that’s kind of blown up to where it seems the chickens are our future. Last year, we had about nine acres of produce planted, this year we only had two because we’ve changed that remaining seven into extra pasture for chickens. And we recently dropped four farmer’s markets because they weren’t generating enough revenue.

I could always go back to my corporate job. That industry isn’t going anywhere. But at this point, I feel lucky to be following my dream. There are still so many other challenges I’d be willing to face knowing that, at the end of the day, this farm is mine and I’m doing what I really believe in.

To learn more, visit Autonomy Farms on the web at autonomyfarms.com, and follow the crew on Instagram at @autonomy_farms.

I apologize for not correct but I am ignorant as to your status. I would just like to say congratulations on finding your way in this world. You are dearly an inspiration to the world and even with your success I would say God bless you and keep you. I pray you could give women every where the confidence to learn from you and for your success to be spread for all women to benefit from.
lauran andrew bahr