Joint Ventures: How The Weed and Wine Industries Are Working Together - Modern Farmer
Food & Drink, Lifestyle

Joint Ventures: How The Weed and Wine Industries Are Working Together

A budding partnership is blossoming between the vines in California's wine country. 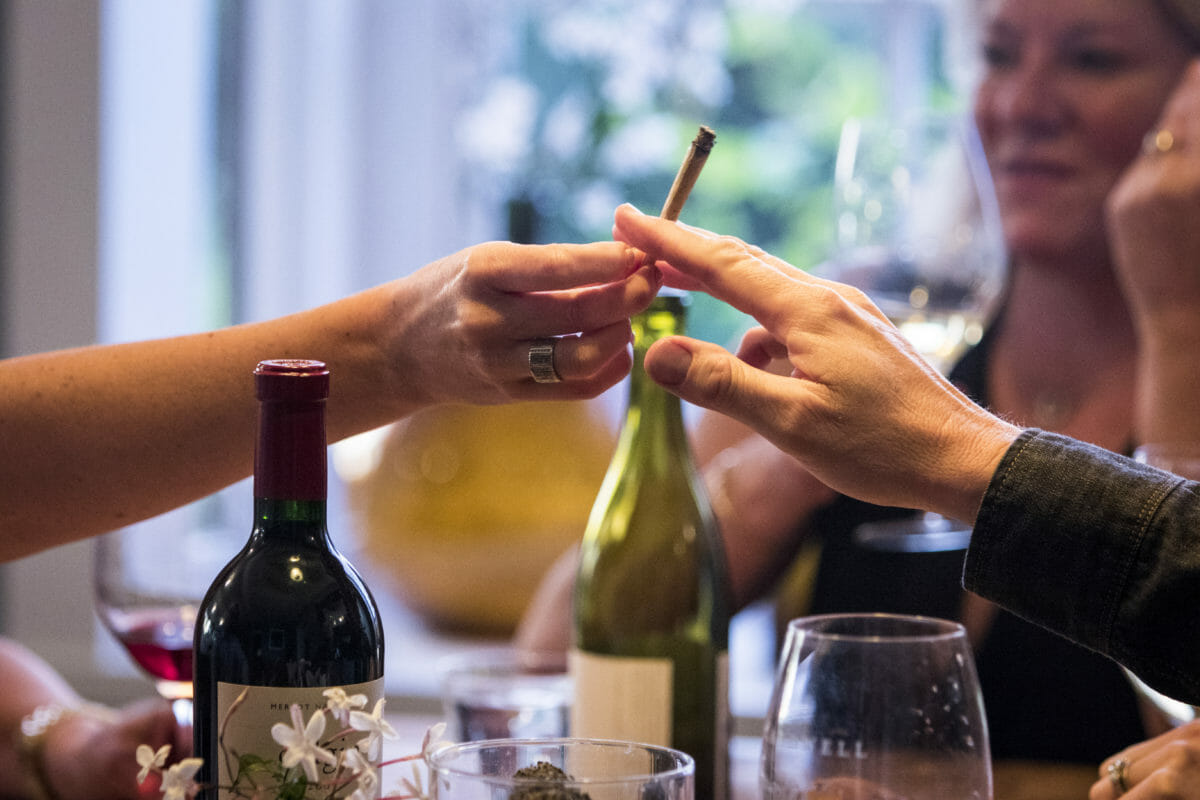 Michael Eymer, who founded Cannabis Tours in Colorado, is one of a handful of entrepreneurs who quickly saw California as a green goldmine. Last year, he opened a new base in West Oakland and then launched a Wine & Weed tour in the area last October. The excursion includes dispensaries, touring a bud grow, tasting wine infused with cannabis flowers, and visiting Bay Area wineries. “I’m also looking for lodging partners to expand into bespoke package holidays,” Eymer says. “There’s a lot of potential here.”

Eymer isn’t the only one to spot that potential. From bud and wine pairings to long, luxurious vineyard dinners with cannabis-infused dishes, many from both industries are finding ways to work together.

Alicia Rose was a consultant for Napa wineries for 15 years before founding Herba Buena, a company selling organic, biodynamic, and sustainably-produced cannabis products, in 2015. Seeing “undeniable synergies” between wine and cannabis, Rose began organizing curated dinners last year. One recent Napa event drew an elegant crowd that might typically be seen sipping and swirling at a winemakers’ dinner. This time, however, they were also puffing and passing.

Rather than infusing the wine or food, Rose keeps the elements “pure”, matching each dish with both a wine and a cannabis strain, served as a pre-rolled joint or in vape form.

“Our guests regularly remark about how incredible they feel after our events”“elevated and happy. Never too full or over-served,” says Rose. “Cannabis can help people get more in touch with their senses, so combining it with great wine and great food can actually elevate the entire ‘sensual’ experience. It’s amazing the nuances even those with less well-developed palates are able to pick out of a glass of wine or a dish after enjoying a small amount of cannabis.”

“Our guests regularly remark about how incredible they feel after our events – elevated and happy. Never too full or over-served,”

Rose describes the attitude of combining wine and weed as “mixed across all parts of the industries”, pointing out that much is still relatively untested.

There has been some concern about the risks of mixing cannabis and alcohol, for example, with the two traditionally seen as very separate indulgences.

A recent Harvard Medical School study found that smoking marijuana before drinking actually reduces the absorption of alcohol into the bloodstream. A second study showed drinking then smoking can have the opposite effect, intensifying the high.

For some, the pleasures of mixing wine and weed aren’t new. Anna Wyatt, founder of the Betty Project”“a chic grow in San Francisco”“has long been an advocate of combining the two.

“I personally have been partaking in cannabis and wine for sometime,” she says. “Cannabis deepens the experience and heightens my senses. Wine lowers my inhibitions. It’s a natural fit.”

Others are dipping a tentative toe into the partnership. Andrew Mieure, who founded his company Top Shelf Budtending in Colorado, worked with Cannabis Tours for their debut Wine & Weed experience. Skilled at controlling dosage and spotting when someone might have had a little too much – his company hosts private events and parties, showcasing a classier way to take cannabis – he was on-hand with a kit of tinctures and sniffing oils to help “bring people back.” He only serves non-alcoholic cocktails at his budtending events, yet he believes alcohol can be responsibly mixed with weed in the right quantities and circumstances.

That “budtending” is an occupation is indicative of the changes legal weed has brought (in some circles, these professionals are referred to as “sensameliers.” There are chefs specializing in cannabis as an ingredient, scientists putting new strains under the microscope, sommeliers with expertise in wine and weed pairings, and social media accounts dedicated to everything green.

Jamie Evans runs The Herb Somm, a blog all about the gourmet side of cannabis. The focus, at first, was food”“everything from stuffed “pot” peppers to salads drizzled with Pot d’Huile, a cannabis-infused olive oil. But with a background in the wine industry, Evans is now developing wine and weed pairings that perfectly balance flavors and aromas.

“There are so many parallels that exist between wine and cannabis,” she says. “Similar to grapevines, cannabis is a plant that is climate and soil-driven. Many cannabis farmers believe in the concept of terroir, where every aspect of a microclimate plays an integral role in the plant’s wellbeing.

“Cannabis growers pay close attention to soil type and climate before planting a crop, just like a viticulturist would. Because of these similarities, it’s pretty common to see a winemaker or grape grower also grow cannabis or a cannabis farmer also grow grapevines.”

Not To Harsh Your Mellow, But…

Not everyone is convinced that this budding relationship will last. Samantha Miller, president and chief scientist at cannabis testing lab Pure Analytics, is on the fence.

“Infusing [wine with cannabis] doesn’t work very well. I have tried several, and they can taste like smoke water,” she says, adding that it remains to be seen if better methods can be developed.

“Many people won’t have the “intoxication dollars” to spend on both weed and wine.”

Another issue is money. If cannabis use increases with legalization, Miller says, many people won’t have the “intoxication dollars” to spend on both weed and wine.

But Miller also believes the combination is not entirely new”“and that concerns about cannabis growths contaminating wine grapes are unfounded.

“There’s always been pot grown in the middle of vineyards. It’s always been that way,” she says. “Unless the flowers integrate with the vines in the soil, I don’t think we would see contamination.”

Cannabis Tours’ national president Heidi Keyes has been the company’s chief cheerleader for the Wine & Weed excursion. She’s adamant that the grape and the (cannabis) strain are soul mates.

“There are so many other ways to use cannabis than to smoke it,” she says. “If this was just a drinking tour, people would be wasted and throwing up. I think wine and weed can be a great combination in the right quantities.”