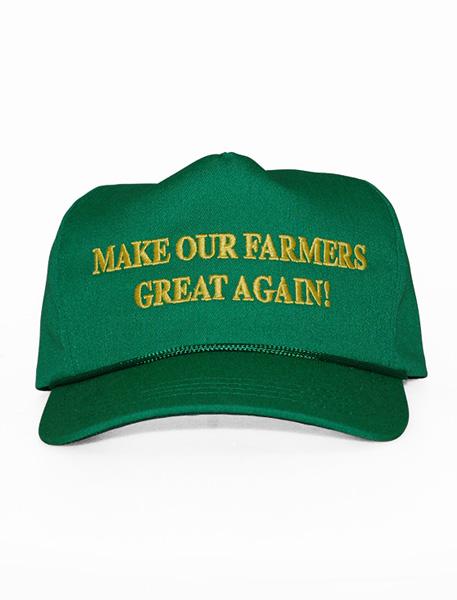 Over the weekend, with farmers an increasing focus of a public relations campaign from the Trump administration, the farmers themselves began asserting their voices. Here’s what happened.

Trump announced, and according to him, designed, a new hat in the style of his “Make America Great Again” red cap. This one is green, with yellow lettering, which to many evokes a major American agribusiness with those signature colors: John Deere, a company that holds massive amounts of farmer debt in its bank, and which forced through legislation to ensure that it’s literally illegal for farmers to fix their own tractors.

The $45 hat sold out quickly, though nobody will say how many were made, and there’s absolutely no data on whether any of the purchasers actually work in agriculture. As a comparison, I often wear a hat with the logo of the Philadelphia 76ers basketball team on it, but I am not associated with the team and do not work in the sports industry at all. Please let us know if you’re a farmer who has purchased this hat.

6% of farmers have decided not to accept any bailout money. 48% are unsure.

Will Farmers Even Accept Financial Aid?

To make up for the effects on farmers of the trade war he started, Trump announced a $12 billion bailout, about which nobody is particularly happy. The damage to farmers is estimated to have already exceeded that amount, and farmers may not be able to earn back their contracts with export partners once this is all over.

Farm Journal Pulse, a survey put out by AgWeb, surveyed 1,115 farmers and found that 6 percent have already decided not to accept any bailout money, with 48 percent unsure. Farmers have been outspoken that they want to sell their goods for a fair price, and not be bailed out with taxpayer money; here’s one example. Here’s another.

A new ad urging farmers to call representatives and oppose the tariffs popped up a few days ago. It is, strangely, produced by a conservative think tank funded by Charles and David Koch. That think tank is heavily invested in free trade – the breaking down of tariffs and barriers to an all-out, lowest-price-wins capitalist system.

That ad isn’t the only one of its kind. Farmers for Free Trade, a fairly conservative nonprofit backed by groups like the American Farm Bureau Federation and the National Pork Producers Council, also launched a four-month, $2.5 million ad campaign.

Check out our previous story for a perspective from more progressive farm groups, like Farm Aid, which are emphatically not in favor of free trade, though that doesn’t mean they’re wild about the trade war, either.