These workhorses are beautiful and functional 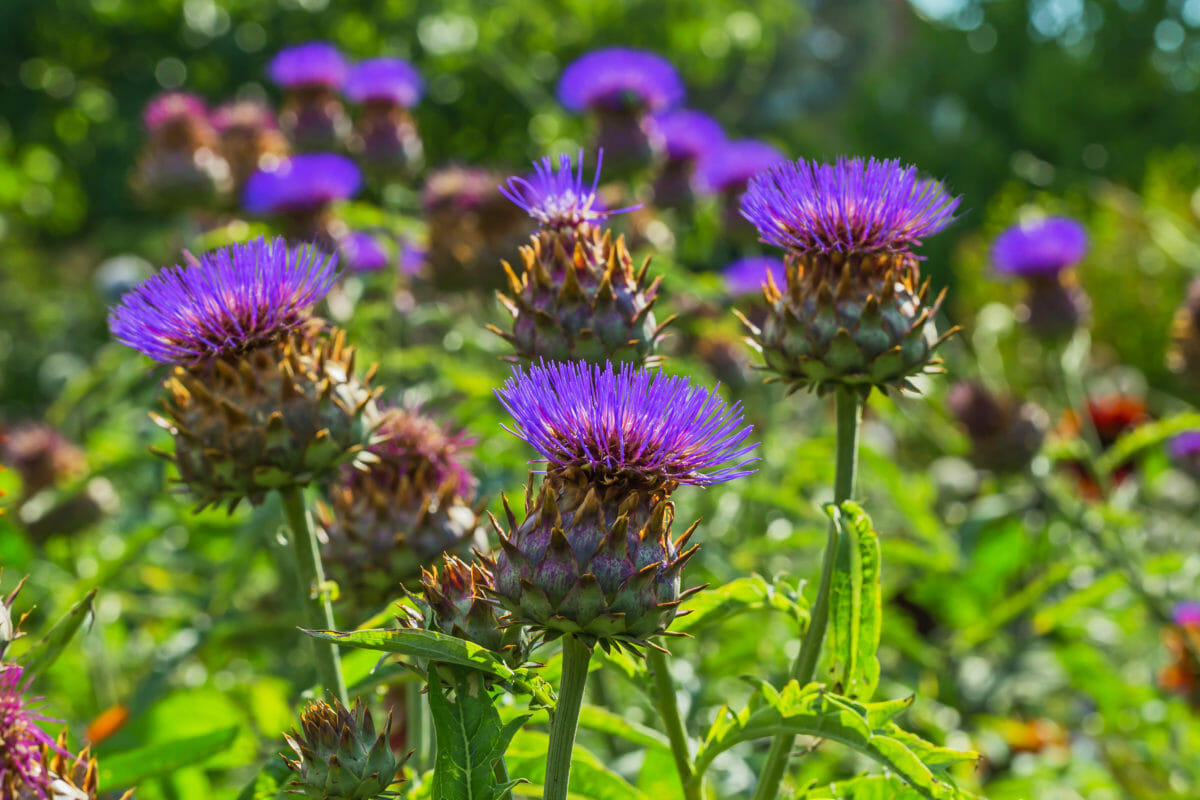 These plants will help your garden - and come back year after year.
Photography By nnattalli / shutterstock.com
Share
Tweet
Pin
Email
1K Shares

But there are also perennial soil-building species, which can be cut for “biomass” several times each year to either be used as a composting material, or to place directly on the ground as mulch. These species are particularly useful in small scale homestead-style gardens where fruits, nuts, berries, and flowers are grown in addition to traditional annual crops.

What qualifies a plant as a soil-builder?

These are plants that thrive in relatively poor soil, produce a prolific amount of biomass (a fancy word for foliage), and quickly improve the soil quality. Many species that have earned this moniker are also known for deep, powerful taproots, which break up hard subsoil, as a well as an ability to accumulate nutrients in their tissues – nutrients that can be made available to other plants when the soil-building species is cut and left to decompose.

Soil builders must respond well to being constantly pruned back. Some perennials are stunted by being cut back on a regular basis; soil builders, on the other hand, are species that regrow even more profusely each time they’re trimmed. These plants are typically planted along the border of a food garden as a hedge, but the smaller species are also suitable for planting beneath fruit trees, where they are perfect for the “chop-and-drop” method: cut off a handful whenever you go by and let the biomass decompose in place on top of the soil, where it acts as a moisture-conserving mulch in the short term, and adds organic matter and nutrients to the soil in the long term. 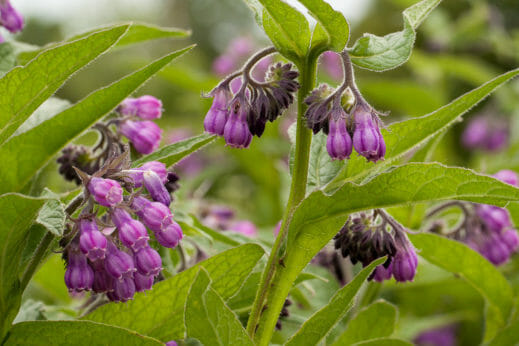 Often considered the king of soil-building plants, the roots of comfrey, a plant that grows less than 2 feet tall, are known to burrow 6 feet or more into the earth, essentially mining the subsoil for nutrients that are unavailable to other plants, which are then concentrated in the foliage. Growing in a low dense clump with leaves up to two feet in length, comfrey produces an armful of biomass in a few months. Once established, you can cut it to the ground and within weeks it will regrow into another shrubby mass. It is easily propagated from root cuttings. USDA zones 3 to 9. 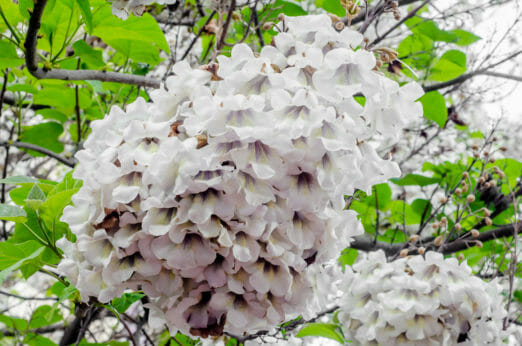 The Empress Tree can be kept as a small shrub with regular trims. Photo by ncristian /shutterstock.com

This tree, which has gorgeous purple flowers and heart-shaped leaves the size of a dinner plate, will eventually grow to more than 40 feet in height, but you can maintain it as an eight-foot shrub if you cut it back every few months. After being cut back to the ground, a thicket of new shoots emerges from the stump with even larger leaves (up to 2 feet across) that make a copious addition to the compost pile. Be forewarned, however, that in some areas this species seeds itself prolifically and can become invasive. Saplings are widely available online. USDA zones 5 to 9. 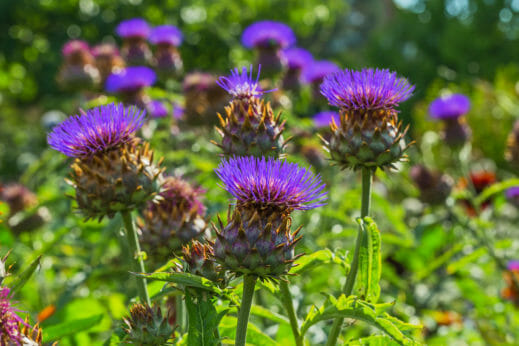 The stems from the Cardoon plant, which is related to artichokes, are edible. Photo by nnattalli / shutterstock.com

This edible soil builder is closely related to artichokes, but instead of eating the unopened flower bud, you eat the blanched stems. Cardoon is a striking Mediterranean plant that grows as a leafy six-foot tall clump, producing an astonishing amount of foliage each year, which is topped with fist-sized purple flowers that resemble a thistle. Grow it from seed or purchase seedlings online. USDA zones 7 to 9. 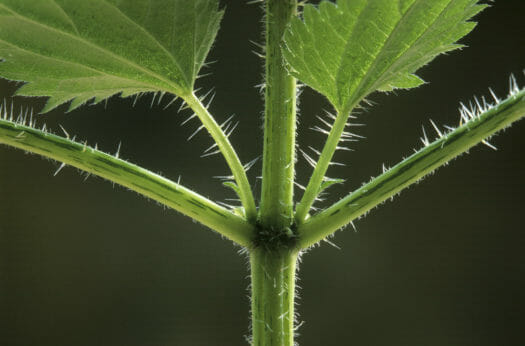 Nettles are known as a nutrient accumulator, similar to comfrey. Photo by Bildagentur Zoonar GmbH / shutterstock.com

Like comfrey, nettles are known as a nutrient accumulator. This plant is a little more complicated to grow, however, as it is covered with tiny hairs that give a mild “sting” if you brush up against them with your bare skin. So it’s not recommended as a garden plant, but it is a native species suitable for cultivation in naturalized areas on rural properties. It grows in sun or shade, but likes lots of moisture. When you’re ready to make a new batch of compost, protect yourself with gloves and thick, long-sleeved clothing and cut the nettle patch to the ground – it will regrow profusely from the underground rhizomes. Grow from seed, USDA zones 3 to 10. 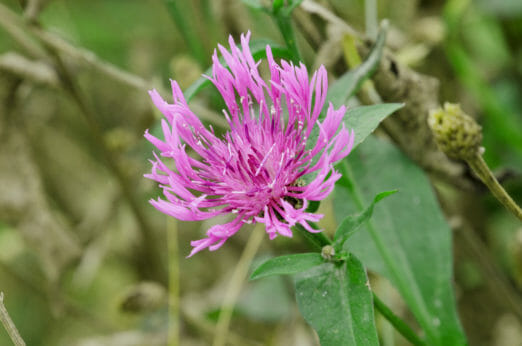 The Mammoth red clover plant has gorgeous, red flowers and is a nitrogen-fixer.

Mammoth is a cultivar of the common red clover plant, which bears lush leafy stalks up to three feet in height and has dazzling red flowers. Like other clovers commonly grown as cover crops, red clover is a “nitrogen-fixer,” meaning it converts nitrogen from the atmosphere into a soluble form that other plants can absorb through their roots. Each time you cut red clover to the ground to harvest biomass for mulch or compost, some of the little nitrogen-making nodules on the roots die off, releasing their nutrients into the surrounding soil. Compared to most other plants, the foliage of clovers (and other legumes) also contains above average nitrogen for your compost pile. Grow from seed. USDA zones 3 to 9. 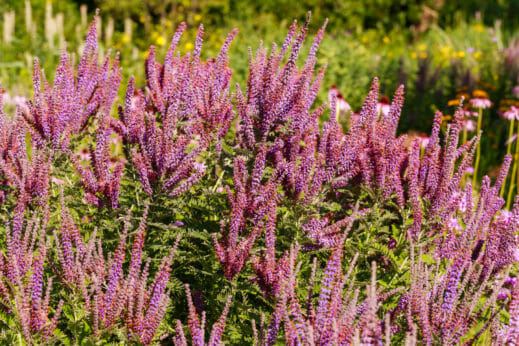 This leguminous shrub, also a nitrogen-fixer, grows quickly to eight feet tall and wide, and can be cut back again and again, yielding wheelbarrow loads of biomass. Virtually indestructible, it prefers moist, partly shaded locations, and is native to forests throughout much of the United States. Grow from seed. USDA zones 4 to 9. 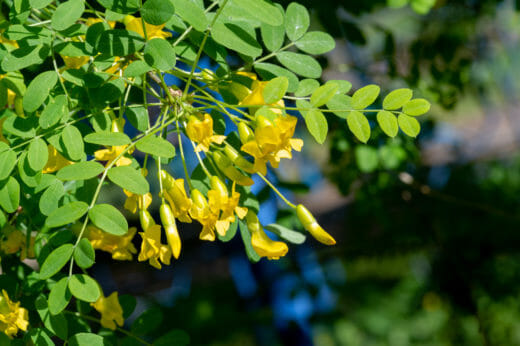 This nitrogen-fixer is virtually indestructible. Photo by Tatyana Mi / shutterstock.com

A tough and hardy soil builder, this nitrogen-fixing legume matures into a small tree with yellow flowers, but is easily maintained as a 6-foot shrub if you cut it back on a regular basis. It fairs poorly in hot climates, but is one of the best soil builders for cold, northerly places. Seedlings are widely available from mail order nurseries. USDA zones 2 to 7.

What is wrong with you? Have you stopped to think that most of this stuff is not native to most of the US? If it’s not native don’t introduce it. This is really irresponsible. “Beautiful and functional” is not the goal.

Somebody doesn’t know their red clover from their centaurea. The picture.

Dhow does Turkey Tangle rate? Does Turkey Tango build up a good root system ? Cattail Bob’s books recommend it for borders with slight slope, to keep wood chips from washing away.

What about Turkey Tangle in Colorado?