Take your salads to the next level by growing a few of these edible flowers in your kitchen garden. 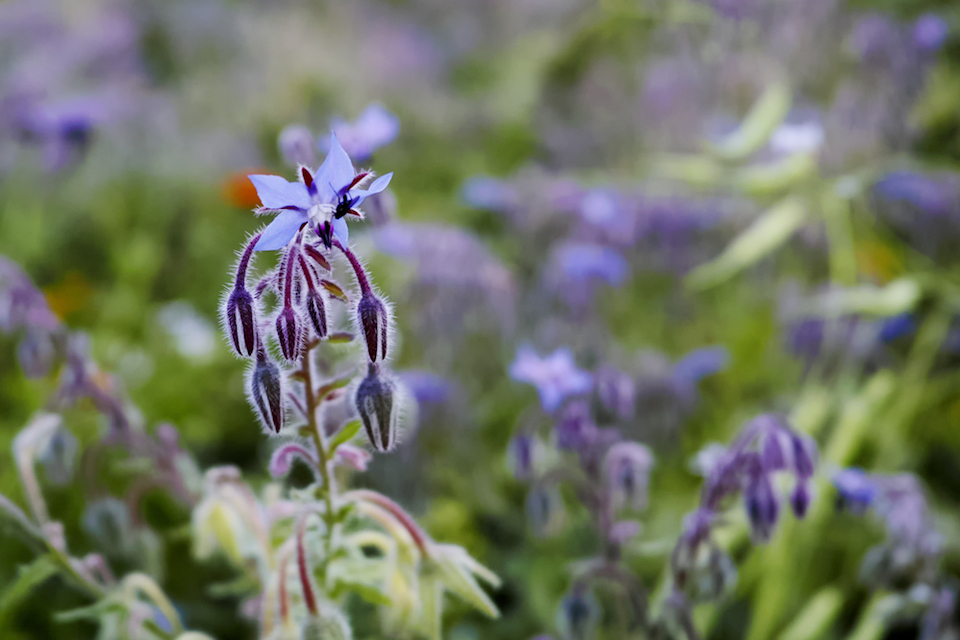 Many a chef certainly has. But most folks are clueless to the vast array of edible flowers. Apple blossoms, for example, impart a delicate floral flavor to fruit salads, along with a heavenly aroma. With many herbs, the flowers taste just like the leaf – chive flowers are a colorful way to infuse salad dressing with a garlic flavor.

On the other hand, some flowers are technically edible, but unpleasantly acrid. Chrysanthemums, for example, or begonias. One reference describes the flavor of wax begonias as slightly bitter with “a hint of swamp.”

A word of warning before we get on to our list of edibles: Exercise caution when using flowers in the kitchen; many are poisonous. Those daffodils in your perennial border could cause nausea, diarrhea, itchiness, stupor, convulsions, or even death, depending on how much you eat. (In almost all cases it’s not just the flower that’s poisonous, it’s the entire plant.) Below, you’ll fine a list of safe-to-consume flowers that we think you’ll enjoy, with a few thoughts on how to grow and use them. And if you’re ever unsure, here’s a list of common poisonous plants whose flowers you never want to ingest. 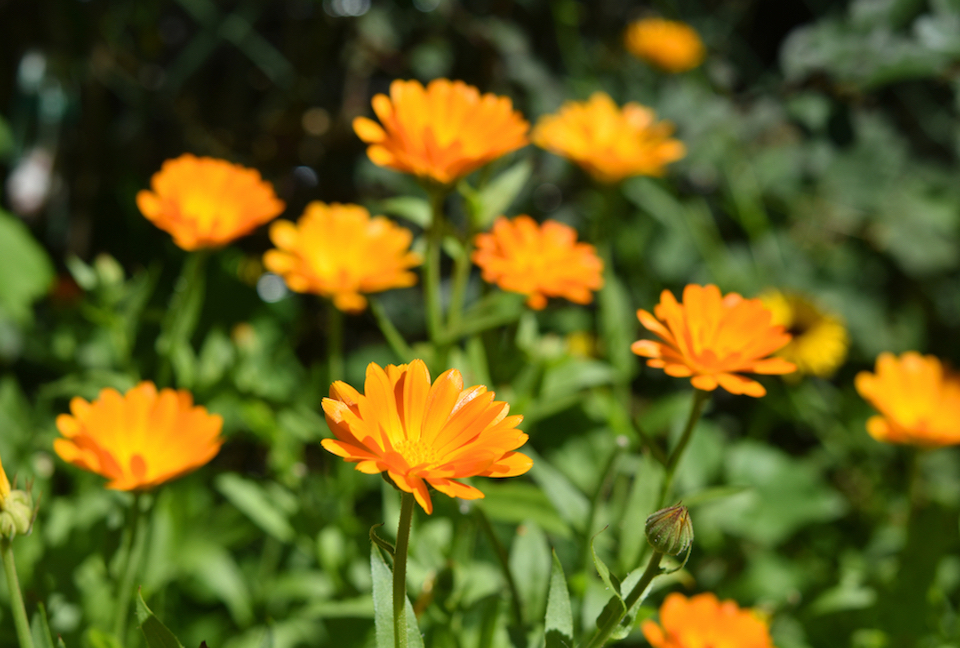 In the Kitchen: These cheery flowers have a fairly neutral, nondescript flavor and are used to brighten-up both salads and sweets. Pastry chefs sometimes use Calendulas to make floral designs on cheesecakes and other goodies. Because the golden-orange petals hold their hue when cooked, they’re sometimes used as a saffron substitute as well.

In the Garden: Calendula is easy to grow from seed, and often reseeds itself in the garden each year without any effort on the part of the gardener. Needs full sun and regular water. 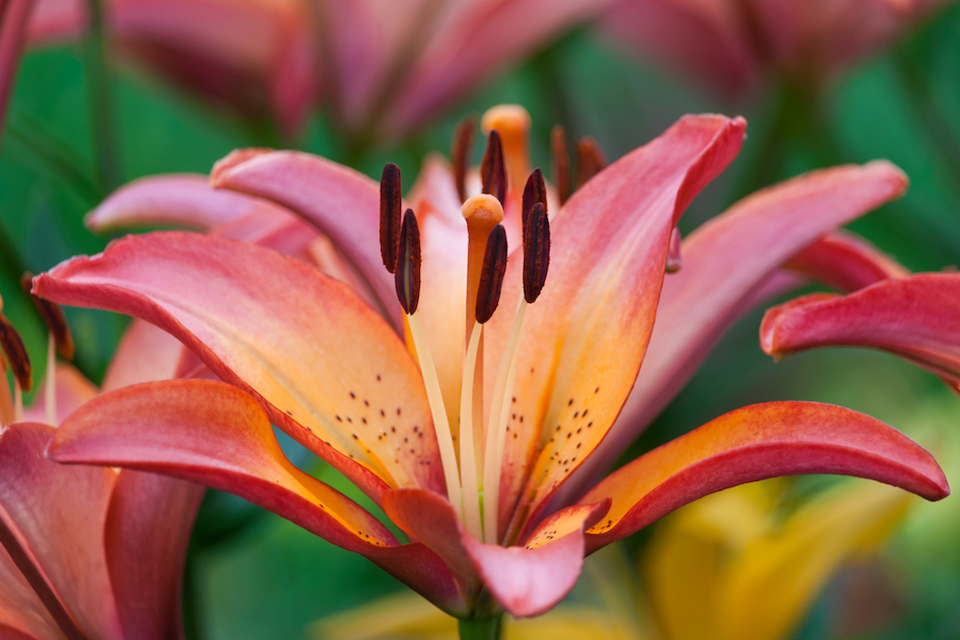 In the Kitchen: Most types of lilies are mildly toxic when consumed, but not daylilies. (Though botanically speaking, daylilies are not a true lily.) Daylily blossoms are meatier than most flower petals, with a succulent texture and a mildly sweet taste, similar to romaine lettuce. Chop them up and add them to salads, but be sure to sample the flavor first, as some daylily varieties taste better than others. Try stuffing them with herbed cheese or dipping the unopened flower buds in batter and frying them up as an hors d’oeuvre.

In the Garden: Daylilies are generally sold as a potted plant and are easy to grow in sun or part sun, as long as you provide ample moisture. In rich soil, they spread to form extensive colonies. 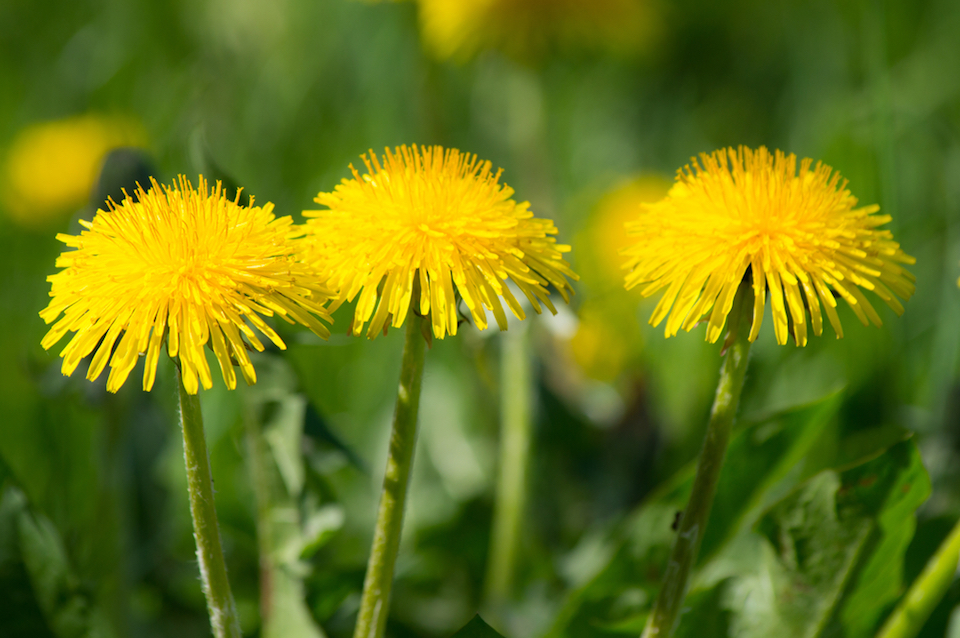 In the Kitchen: Adventurous foodies relish the bitter flavor of dandelion greens in salads and soups, though few realize the flowers are also edible. Use dandelion flowers exactly as you would calendula (a close botanical relative). The flavor is sweeter if picked immediately after the flowers open.

In the Garden: Dandelions can be found growing as a weed almost everywhere (lawns, sidewalk cracks, soccer fields), though you can purchase seeds if you want to establish a bed for culinary use. The plant needs full sun and is drought tolerant, once established. 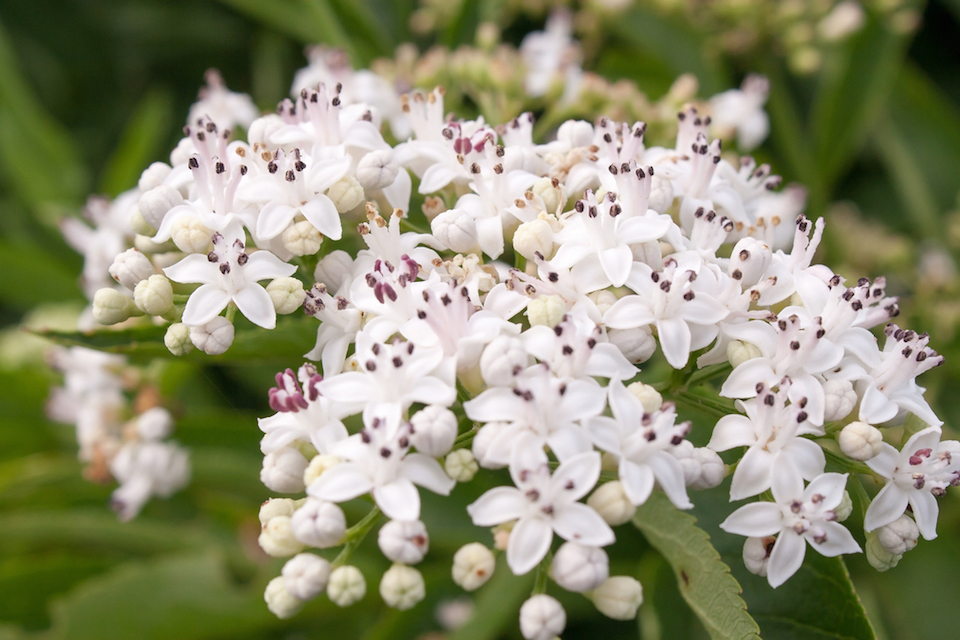 In the Kitchen: Elderberry flowers have a light, honey-like aroma and taste, and they’re often used to flavor white wine, champagne, lemonade, iced tea, and other summery drinks. You can sprinkle the tiny individual flowers in salads, or fry the dome-shaped clusters whole to make elderberry fritters. Beware that elderberry foliage is mildly toxic, as is the uncooked fruit (the cooked fruit, however, is edible and delicious).

In the Garden: Elderberries are typically purchased as a potted plant, and are easy to grow in full sun or partial shade. Water frequently until established.

By Alfred Nesswetha on Shutterstock.

In the Kitchen: Borage flowers have a mild, cucumber-esque flavor and are used to jazz-up salads, drinks, and savory dishes. The plant’s electric-blue hue is a great compliment to calendula’s golden tones, making for a photo-worthy plating.

In the Garden: Borage is easily grown from seed, and typically reseeds itself in the garden year after year. Drought tolerant. 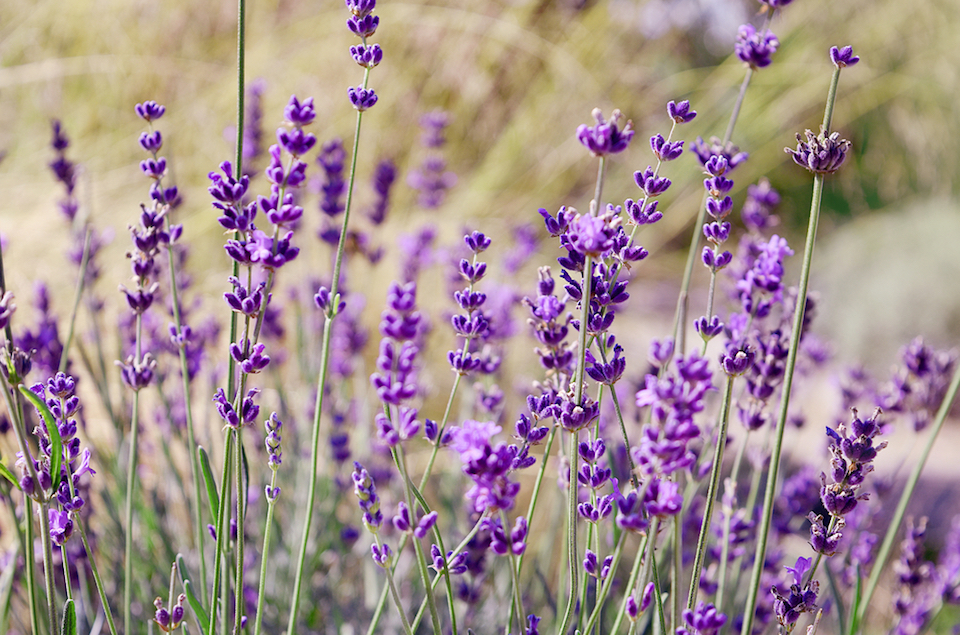 In the Kitchen: Lavender flowers have a unique, savory flavor with a hint of floral sweetness, and they’re usually employed in summer drinks, ice cream, chocolate, and other sweets. Rub the flower buds between your fingers to separate the tiny individual flowers and sprinkle them into your dish.

In the Garden: Lavender is typically purchased as a potted plant. Grow it in a location with full sun and well-drained soil. Lavender is highly drought tolerant – once established, water only when the soil is bone dry. 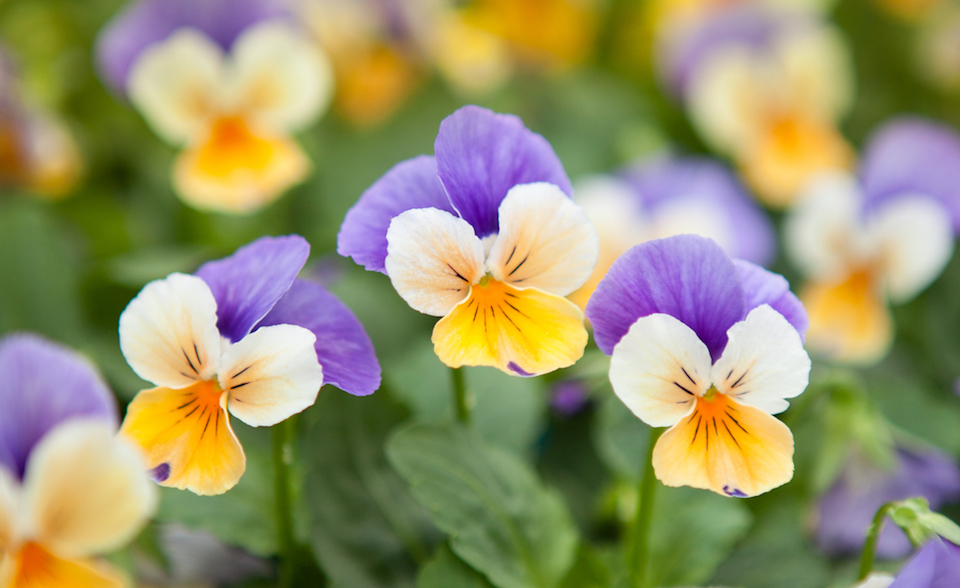 In the Kitchen: Pansies are one of the few flowers that come in every color of the rainbow. They have a mild, nondescript flavor and are used primarily for decorating salads and desserts. Use violets, a close relative of pansies, in the same way.

In the Garden: Pansies are typically grown from seed. They thrive in locations with rich, moist soil and part sun. Pansies suffer in the heat of summer, so they’re primarily grown as spring and fall annuals. 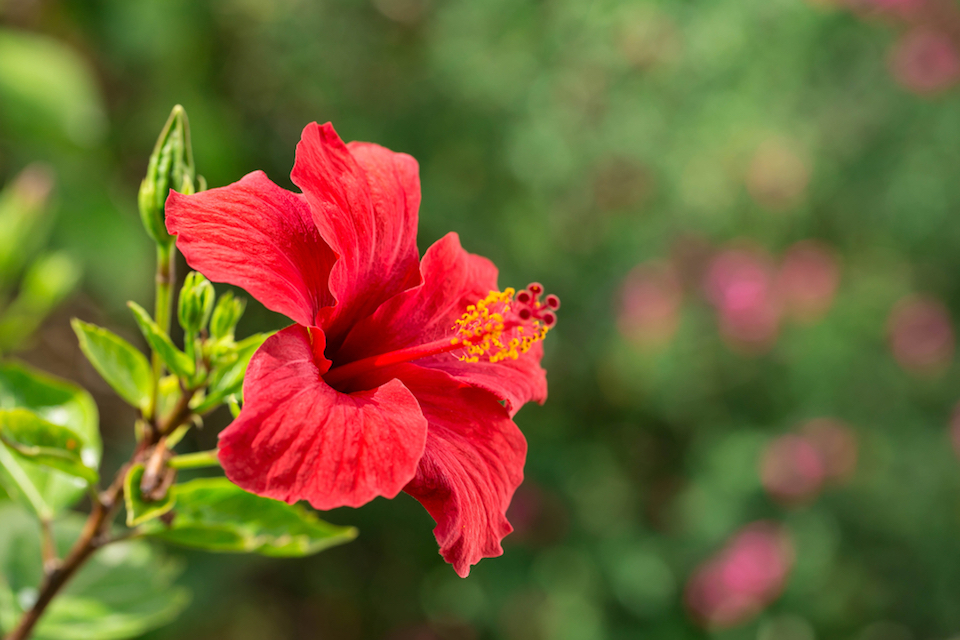 In the Kitchen: Hibiscus flowers have a cranberry-like flavor with tropical notes. Though they’re most often made into iced tea or infused into other cold drinks, chopped hibiscus flowers add a tangy spunk to salads and desserts.

In the Garden: There are numerous edible species of hibiscus, but it is the Jamaican species Hibiscus sabdariffa that is most known for its flavor. Hibiscus is typically purchased as a potted plant. Needs full sun and ample irrigation. 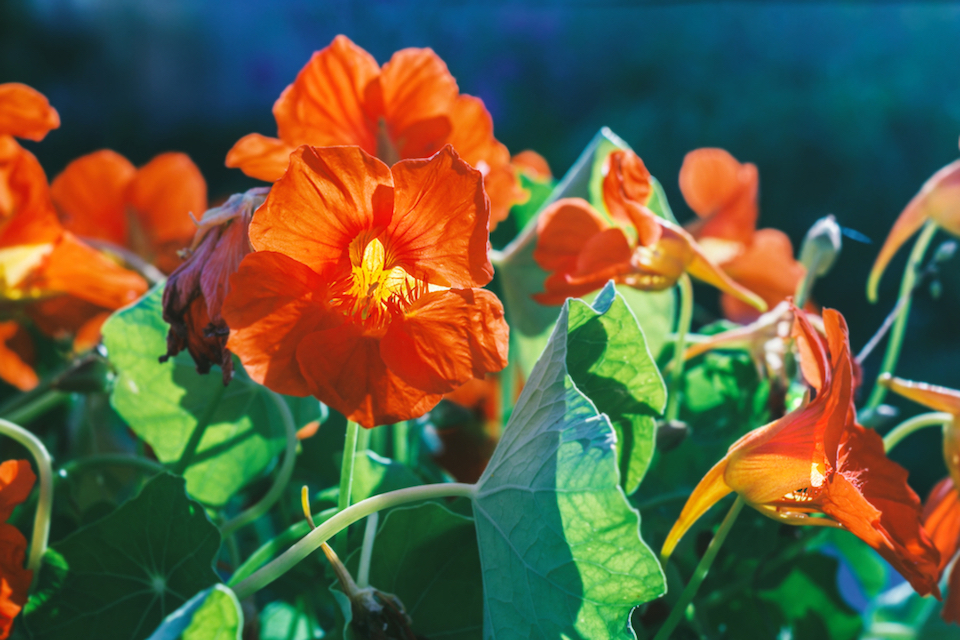 In the Kitchen: Nasturtium flowers have a peppery zest similar to watercress, to which the plant is closely related. They are primarily used in salads and as a garnish for hors d’oeuvres. Though the tubular flowers are large and sturdy enough to stuff with cheese or tapenade.

In the Garden: Nasturtium is easily grown from seed in partial shade or full sun, and often reseed themselves in the garden. Thrives in rich soil with regular irrigation. 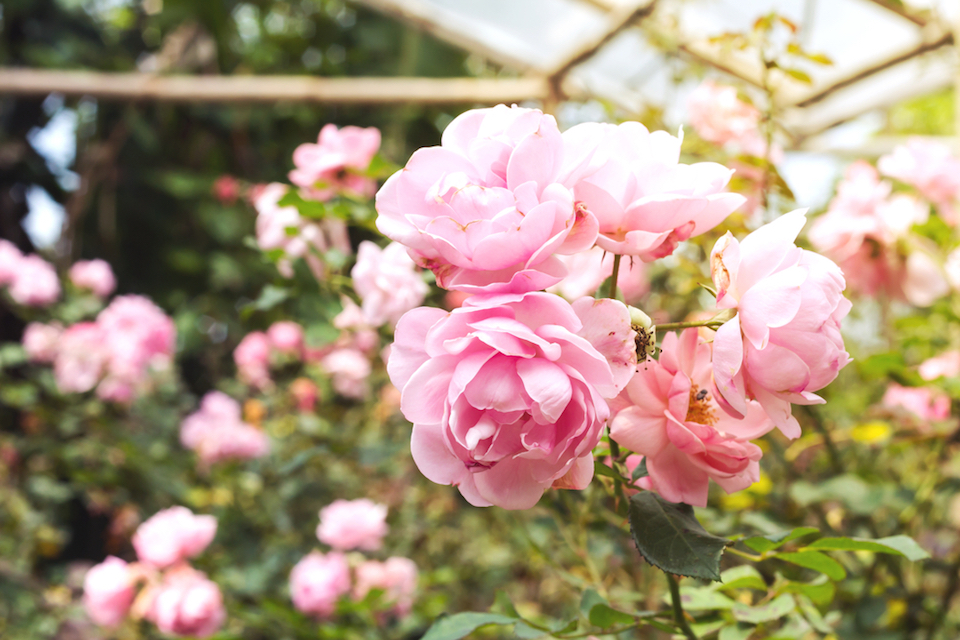 In the Kitchen: Most people pick roses as a centerpiece for their table or to give as a symbol of their affection, but their culinary qualities are unsurpassed. Roses taste much like they smell, but with a slightly bitter undertone. Use in drinks, desserts, and salads, or make rose petal jam.

In the Garden: There are literally hundreds of rose varieties to choose from, some of which are much easier to grow and others. Iceberg roses and Knock Out roses are two of the most foolproof varieties. Roses thrive in a location with rich, well-drained soil and full sun. They require regular irrigation.

Fun ideas but the photo of the daylily is not a daylily but a true lily. Wouldn’t want folks to be confused. I love using flowers in salads, vinegars and butters.